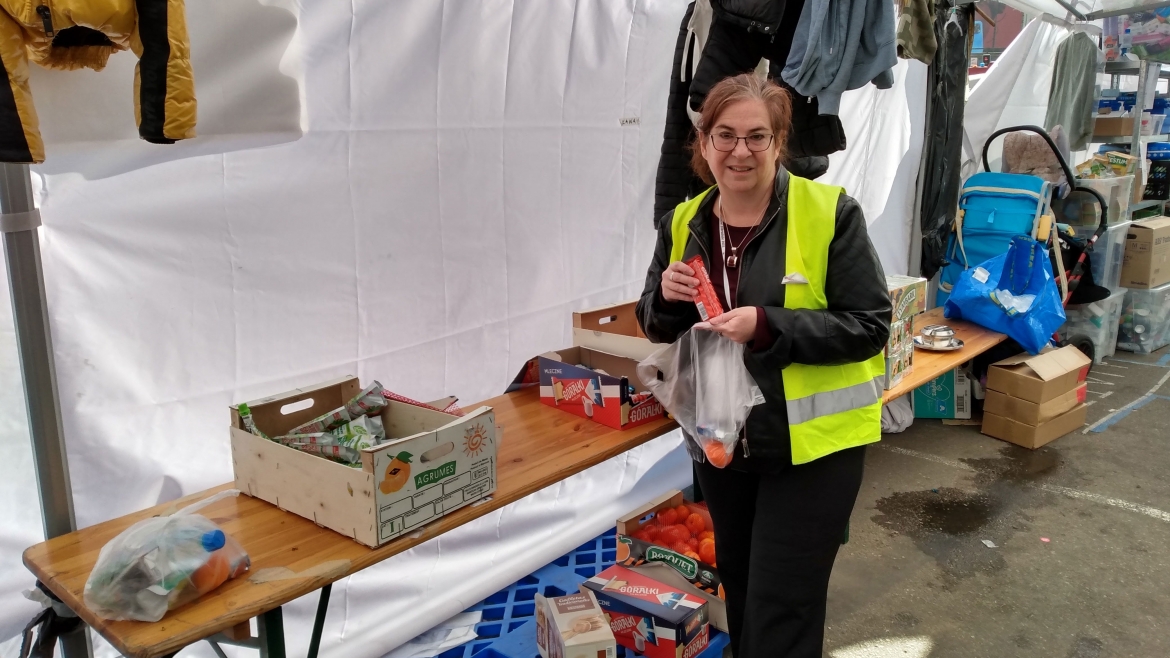 'I came here to do a Fulbright, and an international disaster happened. ... So I just started showing up'

What still haunts Jessica Hirshorn, principal lecturer in the College of Integrative Sciences and Arts (CISA) at Arizona State University, is a feeling that she let down one young Ukrainian woman who approached her for help at the Warsaw Central Train Station.

The young woman had gone to the housing booth, desperate to find a place to stay, but hadn’t been called back yet, so she approached Hirshorn, who was wearing a yellow volunteer jacket.

“I gave her Facebook groups and said to post that you need a place to stay. I kept checking back in with her, and eventually she got a place to stay for that night, but people weren’t picking her ... for another (night),” Hirshorn explained.

“I knew that my cousins already had people staying at their house, but I didn’t know that they actually had space for a third person. Had I known that, I would have said to go there. I feel like I just left her, you know? The next morning, I woke up in a panic, like, 'Oh my God, she was kind of my responsibility.' I know she had a place for that one night, but what happens the next night?”

Hirshorn has grown her capacities as a volunteer since she began assisting in efforts to help Ukrainian refugees arriving in Warsaw, but she still carries thoughts of the many heartbreaking stories she has encountered. Hirshorn, who teaches interdisciplinary studies and organizational leadership courses in CISA’s faculty of leadership and integrative studies, is a Fulbright Faculty Core Scholar at the University of Warsaw in Poland this spring. She arrived on Feb. 13; less than two weeks later, Russia invaded Ukraine.

Hirshorn learned about the volunteer opportunity from a fellow Fulbright, and on her first day of volunteering she went down there with two other Fulbright scholars.

“It was very crowded and at first, I was just answering questions, but it was hard because I didn't have the language skills. I don't know Ukrainian. I don't know Russian. I don’t know Polish,” Hirshorn said, describing the early, chaotic arrivals of Ukrainian refugees. “I was just using Google Translate, but then, with the help of friends, I actually came up with a question-answer guide for all the types of questions I was getting — in English, Polish, Ukrainian and Russian.”

Hirshorn described the variety of needs Ukrainian refugees have had, many of whom didn’t have proper suitcases or luggage. She said it looked like they threw what they could carry into backpacks and bags and fled.

“They don’t know where to go, don’t know how to take a train. These are people that just fled their country,” Hirshorn said. “Maybe their backpack broke, or they're carrying a little baby and they didn't have a stroller.”

Hirshorn has noticed a difference between early refugees, who seemed to have means and more language skills, compared with later arrivals, who maybe don’t have the experience or the means for international travel.

“This one woman, in her 80s, had a clubfoot and was on crutches. She wasn’t carrying a normal suitcase. She had a metal grocery cart,” Hirshorn said. “She came up to me and said, ‘I need help finding a diaper.’ I was able to find her an adult diaper, so I felt proud of myself that I was able to help with my limited skills.

“But afterwards, I was really choked up because here is this lady who’s never left her rural village in Ukraine in her entire life, and probably never planned on leaving her village. I just lost it. This has uprooted their lives. This one was particularly very hard on me, just emotionally.”

Hirshorn has been volunteering at the station every Monday and Friday.

“I came here to do a Fulbright, and an international disaster happened. I just felt a moral and ethical call to help,” Hirshorn said. “I felt a need, especially with my background. So I just started showing up at the train station.”

Hirshorn’s background is in international education. She has experience as a Peace Corps volunteer and was involved in launching CISA’s Peace Corps Prep certificate. She’d always been aware of Fulbright opportunities, but her family’s Polish and Jewish heritage had inspired a family reunion in Poland in 2011, and that experience planted the idea to do a fellowship there.

In 2019 she worked with the University of Warsaw to develop a proposal for an applied research class on diversity, and it was announced she got the Fulbright in 2020. Her fellowship was delayed a year due to COVID-19, and she was finally able to go in spring 2022.

Hirshorn is teaching a class to third-year students called Preparation and Realization of Social Research: A Focus on Diversity in Polish Schools, for the Institute of Applied Social Sciences. The class meets on Wednesdays in person through June 13.

“When I first proposed the class, people were like, 'Oh, there's not much diversity in Polish schools,'” Hirshorn said. “It's not dealt with and recognized like it is in the United States, but now they have a lot of diversity coming in with all the Ukrainian students, and so this is something they really haven't had to deal with in a long time.”

For her class, she split up her students into three groups, with each group tackling an aspect of diversity in Polish schools that the students had brainstormed: how Polish schools are acclimating to the influx of Ukrainian students; a qualitative emerging study looking at teacher preparation to address diversity; and how socioeconomics impact how schools are able to address diversity.

“I feel like the project that I'm working on with my students is very timely,” Hirshorn said. 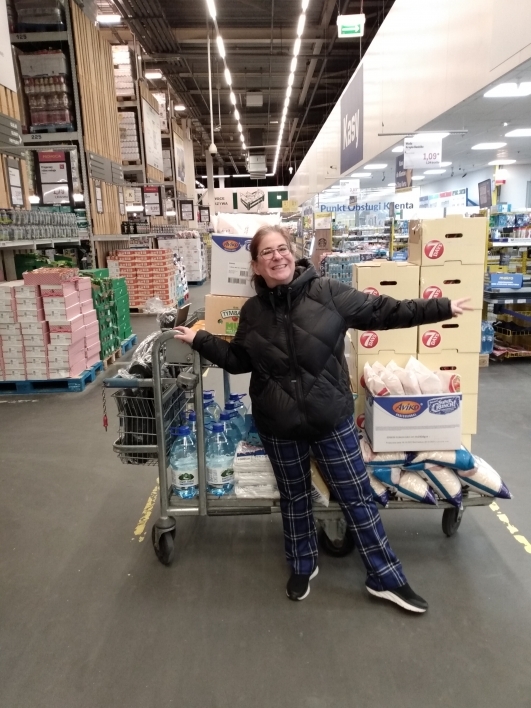 ASU Principal Lecturer Jessica Hirshorn poses with supplies she and fellow volunteers purchased to support Ukrainian refugees. She started a fundraising campaign so she could purchase specific items that the volunteers needed. In 48 hours, she raised $3,000. Another volunteer told her about Makro, the Polish equivalent to Costco, and helped arrange for a driver with a van to take her. 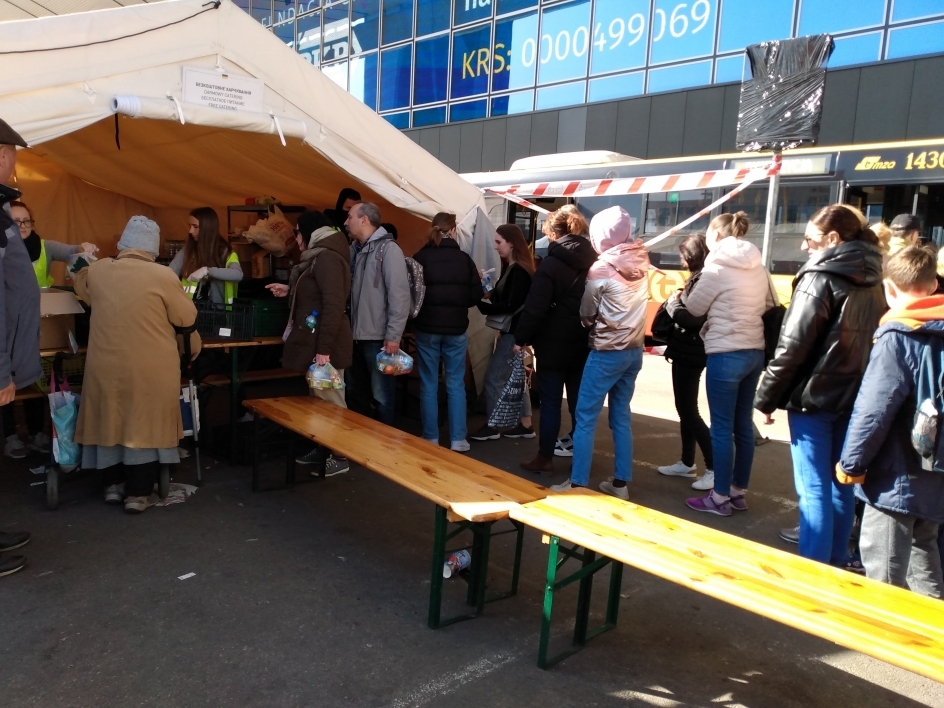 Volunteers hand out food and drinks to Ukrainians who have recently arrived at the Warsaw Central Train Station. Volunteers hand out drinks to Ukrainian refugees at the Warsaw Central Train Station. 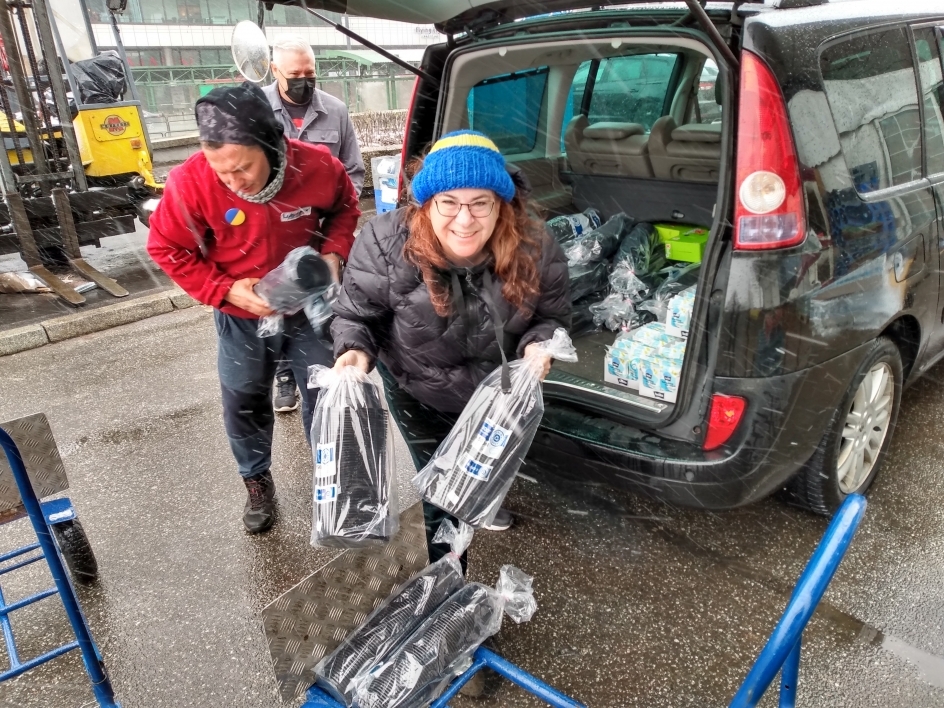 Jessica Hirshorn, Łukasz (red jacket), who runs the kitchen at the train station, and Dennis Evans (gray jacket), another volunteer from San Jose, California, load up Marek Rozum's van with the bowls they purchased for the World Central Kitchen — which had food, napkins and silverware but no bowls to serve 3,000 people that day. 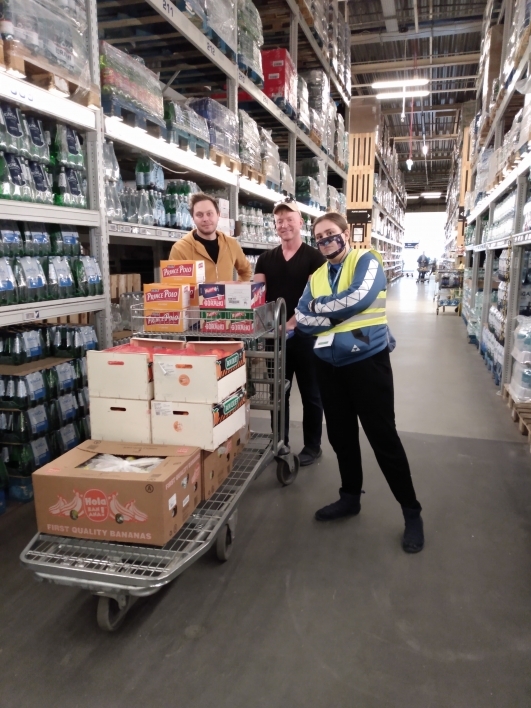 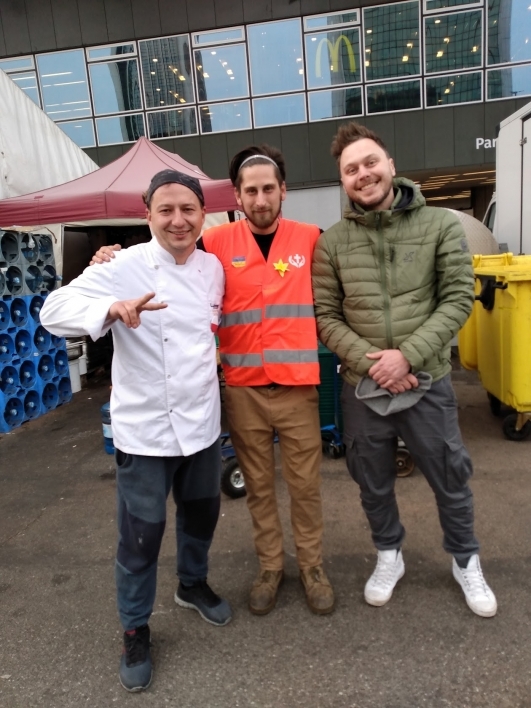 Łukasz, Christian Heil and Rozum. Łukasz runs the kitchen at the Warsaw Central Train Station and provides 10,000 meals a day.

She described her students’ reactions to recent news of African and Indian students being harassed or not receiving fair treatment at the Polish border as they also tried to flee Ukraine.

“My students were hearing the news, and they were embarrassed,” Hirshorn said, and described Warsaw as being more liberal than the Polish government.

“My students are almost like the backlash to the government,” she observed. “It's interesting for me to hear some of my students don't believe in nation-states, and just ideas and things I had never thought of.”

Hirshorn says that these discussions have brought up interesting conversations around Poland’s outpouring of support for Ukraine. Some want to know why there is so much support for Ukrainians but not other refugees. Hirshorn thinks a lot of it has to do with proximity, but also that Poland and Ukraine have a lot of shared history.

“I think that it also illustrates that Poles have learned from history. My family is Ashkenazi Jewish, and sometimes the Polish-Jewish relations haven't been the best. I would say they have absolutely learned from history, and that is why there has been such an outpouring of warmth.”

Hirshorn has been impressed by how the people of Poland have opened their hearts and homes to Ukrainians, and how they have been showing their support with pride.

“Everywhere you go here, there are Ukrainian flags. I went to the Polish Royal Ballet. In front, they had a huge Ukrainian flag. And everybody stood up for the Ukrainian national anthem,” Hirshorn said.

There are now 2.5 million Ukrainian refugees in Poland, she noted, and Warsaw’s population has increased by 20% in the last month. Most of the aid and relief for Ukrainians is being done by grassroots efforts; there isn’t a large organizing body that is handling the crisis.

Hirshorn said she has switched from answering questions to help serving food at the train station. She quickly noticed how fast they ran out of food and supplies. The donations came from ordinary people and local businesses, so the volunteers might get an influx of some items but run out of others.

Hirshorn decided to start a fundraising campaign so she could purchase specific items that the volunteers needed on the days she was there. In 48 hours, she raised $3,000. After some trial and error on how to get food and supplies delivered, another volunteer told her about Makro, the Polish equivalent to Costco, and helped arrange for a driver with a van to take her.

Thanks to those donations and the volunteer with the van, she was able to help the World Central Kitchen get out of a jam during one of her shifts.

“They had all this food, and they had napkins and they had silverware, but they had to serve 3,000 people that day, and they had no bowls to put the food in,” she said, describing an example of the changing daily needs. Hirshorn and a couple of volunteers went to Makro and bought out all of their bowls, about 1,800, so the World Central Kitchen could provide meals that day.

Since raising the money, she has been going back to Makro to fulfill that day’s food and supply needs with Marek Rozum, the volunteer with the van, and any other volunteers who want to help with the loading and unloading of the supplies they purchase. On their very first trip to the store, one of those volunteers was Col. Philippe “Boz” Rogers, USMC, who is the director of defense operations for NATO. He was in town for President Joe Biden’s visit and decided to spend that morning helping out at the train station.

“A lot of people want to do what they can to help. They feel this coming from their hearts, and this ethical obligation to really care,” said Hirshorn about the mobilization of individuals to help Ukrainians. “That's been really wonderful.”

Hirshorn said she has discovered a lot about herself during this experience. She doesn’t miss driving and has enjoyed exploring Warsaw, often walking around, learning about the city and visiting museums. She has also realized how much volunteering means to her.

If you would like to support Ukrainian refugees, Hirshorn recommends donating to the following groups:

Arizona State honored a legendary 16 member senior class after the game against USC. ...

Tempe campus , Tucson , The College of Liberal Arts and Sciences , School of Politics and Global Studies Arizona State honored a legendary 16 member senior class after the game against USC.