Two members of the Arizona State University community are named in the new membership rolls of the American Academy of Arts and Sciences announced on April 22.

Members are recognized for their outstanding achievements in academia, the arts, business, government and public affairs. Their charge is to conduct policy studies and nonpartisan public policy advocacy.

The academy was founded in 1780 and included George Washington and Benjamin Franklin in its first membership cohort. Over 1,300 nominations are considered each year; in 2020, around 270 members were elected — including two from ASU

“We are honoring the excellence of these individuals, celebrating what they have achieved so far, and imagining what they will continue to accomplish,” David Oxtoby, president of the American Academy, said of this year's newly elected members. “The past year has been replete with evidence of how things can get worse; this is an opportunity to illuminate the importance of art, ideas, knowledge and leadership that can make a better world.” 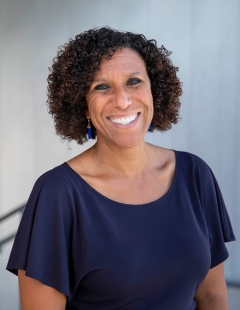 Thompson, who directs the Arizona Center for Medieval and Renaissance Studies (ACMRS), is an internationally recognized scholar of Shakespeare, race and performance. She is the author of several books, including “Shakespeare in the Theatre: Peter Sellars” (2018), “Teaching Shakespeare with Purpose: A Student-Centred Approach,” co-authored with Laura Turchi (2016), “Passing Strange: Shakespeare, Race, and Contemporary America” (2011), and “Performing Race and Torture on the Early Modern Stage” (2008). She is the editor of “The Cambridge Companion to Shakespeare and Race” (2021), “Weyward Macbeth: Intersections of Race and Performance” (2010) and “Colorblind Shakespeare: New Perspectives on Race and Performance” (2006). She wrote the new introduction for the revised Arden3 “Othello” (2016) and is collaborating with Curtis Perry on the Arden4 edition of “Titus Andronicus.”

“I am truly honored by this recognition, and I hope to use this platform to amplify the needs of BIPOCBIPOC stands for Black, Indigenous and people of color. scholars in the academy,” Thompson said.

Her most recent book, “Blackface” (2021), unearths the history and legacy of the performance of Blackness, from premodern stages to contemporary media. Thompson discussed the book with students and faculty in a virtual event as part of ASU’s TomorrowTalks series on April 15.

When Thompson began her tenure as director of ACMRS in 2018, she announced that the center’s mission would be daring and inclusive. “This will be the place where people want to go to try out their new ideas,” she promised. “… My goal is for this to be the world-leading center for the study of medieval and Renaissance work."

By many accounts, Thompson has already accomplished that goal. ACMRS has played host to globe-spanning events and has been recognized in national media for its vision and impactful work. The center’s wildly successful RaceB4Race series challenges scholars of premodern studies everywhere to acknowledge race as a lens for investigation, to support scholars of color and to address the systemic inequity in their universities and institutions. Publishers Weekly announced that ACMRS Press, another new venture by the center, was “pulling Shakespeare into the 21st century,” with the publication of the Play On Shakespeare series. And most recently, Thompson helped guide a cluster hiring initiative that will bring five new faculty of color to the Department of English and ACMRS in fall 2021.

“Ayanna Thompson is amazing, and the work that she undertakes is changing the world,” said Jeffrey Cohen, dean of humanities in The College of Liberal Arts and Sciences at ASU, of which both the Department of English and ACMRS are part. “I’ve never met anyone so brilliant, visionary and selfless: Everything she does is for a greater good. I joke that I have made a second career out of composing tributes to her latest achievements — and there have been so many well-earned ones over the past few years! Her election into AAAS is extraordinarily special. The humanities community is fortunate to have her with us, blazing a trail towards a better future.” 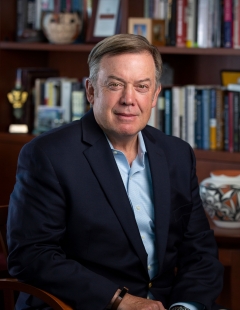 Crow, who spearheaded ASU’s rapid and groundbreaking transformative evolution into one of the world’s best public metropolitan research universities, is an educator and a science and technology policy scholar in addition to being a higher education leader. As a model “New American University,” ASU simultaneously demonstrates comprehensive excellence, inclusivity representative of the ethnic and socioeconomic diversity of the United States, and consequential societal impact.

Lauded as the “No. 1 most innovative” school in the nation by U.S. News & World Report for six straight years, ASU is a student-centric, technology-enabled university focused on global challenges. Under Crow’s leadership, ASU has established 25 new transdisciplinary schools, including the School of Earth and Space Exploration, the School for the Future of Innovation in Society, and the School of Human Evolution and Social Change, and launched trailblazing multidisciplinary initiatives including the Biodesign Institute and the Julie Ann Wrigley Global Futures Laboratory, and important initiatives in the humanities and social sciences.

Since Crow took the helm of ASU in 2002, research expenditures have grown from $110 million to $639.6 million in expenditures in fiscal year 2019, putting the university at No. 6 in the latest National Science Foundation Higher Education Research and Development rankings. Enrollment has grown to more than 120,000 students while success metrics have kept pace: First-year retention and four-, five- and six-year graduation rates have all increased since the start of Crow’s tenure, and the student body’s demographics have diversified to better match that of the state.

The inaugural recipient of the ACE Award for Institutional Transformation, Crow is an elected fellow of the American Association for the Advancement of Science and the National Academy of Public Administration, and a published author.

“It is with deep appreciation that I welcome my election to the American Academy of Arts and Sciences,” Crow said. “It is recognition of the incredible evolution of this institution, which is the result not of my work alone but the collective effort of so many to advance our charter — pursuing excellence in the classroom, the lab and in the community, opening access to education to learners across their life span and across demographics, and working in and with communities to make life better for all. There is unbelievable potential when we step away from how we’ve always done things and move toward new ideas and new approaches, and I’m excited to see what the future holds.”

Leah Newsom and Kristen LaRue-Sandler contributed to this story.

Editor's note: This story is part of a series of profiles of notable spring 2021 graduates.Ellen Streitwieser’s interest in chemistry started out very personally, the result of an autoimmune disorder and metabolic failure.“After experiencing a profound dysfunction in my own body’s biochemical function, I found a driving curiosity to understand the ‘why’ of how my body works," Streitwi...

Ellen Streitwieser’s interest in chemistry started out very personally, the result of an autoimmune disorder and metabolic failure. 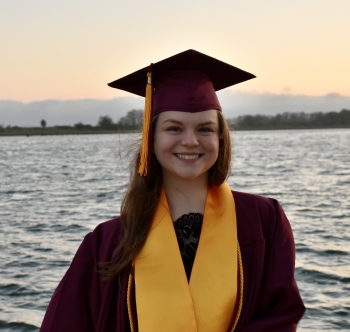 “After experiencing a profound dysfunction in my own body’s biochemical function, I found a driving curiosity to understand the ‘why’ of how my body works," Streitwieser said.

She transferred into ASU’s online biochemistry program, which allowed her to continue her education while on the road to recovery. Even after her health struggles resolved and faded, her passion for chemistry did not. In fact, through one class, computational chemistry and biochemistry, taught by Professor Abhishek Singharoy, Streitwieser discovered a love for computational research.

“I realized that there was research occurring at ASU that elegantly combined my varied interests in biochemistry, neuroscience, physics and computer science,” Streitwieser said. “Working with Dr. Singharoy has shown me a model for scientific inquiry that values a collaborative, team approach and has encouraged me to see my own potential as a scientist. His mentorship has fundamentally shaped the scientist I am today.”

Streitwieser also credits Ara Austin, director of the School of Molecular Science's online programs, for her mentorship and guidance.

“Dr. Austin was one of my organic chemistry professors and saw my potential at a time I hadn’t recognized it within myself. Over the past two years she has encouraged me to go after my goals and has been instrumental in my applying for internships, scholarships, tutoring positions, research opportunities and PhD programs.”

Streitwieser has developed into a young scientist whose talent is being recognized. She was the 2019–2020 recipient of the ACS Division of Organic Chemistry Undergraduate Award, the 2020 recipient of the School of Molecular Sciences Women in Science Scholarship, and also received a 2021 National Science Foundation Graduate Research Fellowship Program Honorable Mention.

This year, Streitwieser was honored as the recipient of the prestigious 2021 School of Molecular Sciences Dean’s Medal, recognizing her scholastic achievements.

“I am honored to have been selected for this award, especially as an online student and really feel it is the capstone achievement to my time at ASU,” said Streitwieser.

Helping others is important to Streitwieser. While at ASU she worked as a teaching assistant for organic chemistry and tutored in the online learning resource center. Being an online student and helping online students allowed her to see a need that she developed into a valuable resource. Together with other students, Streitwieser founded the IDEAS Student Society, a club for ASU Online science students to meet and connect with one another. Founded in 2019, the club now has over 700 members.

“Our weekly virtual events have kept me sane while completing my degree and applying to PhD programs,” Streitwieser said. “The friends I have found there will be with me for life.”

Pursuing a PhD in neuroscience is Streitwieser’s next step. With support and encouragement from professor Singharoy and others, Streitwieser was accepted into nine PhD programs, including Uuniversity of California, San Diego; Berkeley; Johns Hopkins; ASU; and the University of Washington, among others.

“In 2018, as an online student just starting at ASU, I never imagined I would one day be viewed as a competitive candidate at this level,” Streitwieser said. “I’m proud to say that after graduating from ASU with my bachelor’s in biochemistry, this fall I will be starting my PhD in neuroscience at the University of Washington.”