Two Arizona State University professors have been elected to the American Academy of Arts and Sciences, an organization that was formed in 1780 by John Adams, John Hancock and other leaders of the time.

Cheshire Calhoun, faculty head and professor of philosophy in the School of Historical, Philosophical and Religious Studies, and James Collins, the Virginia M. Ullman Professor of Natural History and the Environment in the School of Life Sciences, were chosen for their foundational work in the fields they represent. 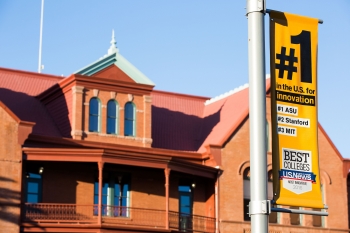 They are among the 276 members of the 2020 class recognized for their outstanding achievements in academia, the arts, business, government and public affairs. Others elected to the academy this year include singer, songwriter and activist Joan Baez; former Attorney General Eric Holder; bioethicist R. Alta Charo; and independent filmmaker Richard Linklater.

“The members of the class of 2020 have excelled in laboratories and lecture halls, they have amazed on concert stages and in surgical suites, and they have led in boardrooms and courtrooms,” AAAS President David Oxtoby said. “These new members are united by a place in history and by an opportunity to shape the future through the academy’s work to advance the public good.”

Calhoun’s work stretches across areas of normative ethics, moral psychology, philosophy of emotion, feminist philosophy and gay and lesbian philosophy. Her most recent book, "Doing Valuable Time: The Present, the Future, and Meaningful Living," deals with the various ways that motivations for living life are affected by our connection to temporality. 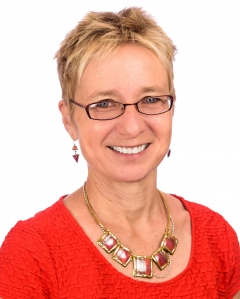 “As an advocate of women in the profession, a leader in her guild and head of the philosophy faculty in (the School of Historical, Philosophical, and Religious Studies), Cheshire Calhoun has also worked tirelessly to create the conditions necessary for new generations of scholars to lead meaningful lives of philosophical engagement,” said the school's director, Richard Amesbury. “Her election to the American Academy of Arts and Sciences is a well-deserved recognition of these many contributions to hopeful and perspicacious living.”

Calhoun is currently the faculty head of philosophy and the editor for the Oxford University Press series “Studies in Feminist Philosophy.” She is a chairperson for the American Philosophical Association’s board of officers and served as chair of the philosophy departments at Colby College and University of Kentucky. Her past positions include director of women’s studies at Colby College and the College of Charleston.

“It is both humbling and extremely gratifying to find myself among the American Academy of Arts and Sciences’ philosophers, a list that includes so many of the philosophers that I admire and have been influenced by, sometimes profoundly,” said Calhoun. “It is also heartening to know that it’s possible to have one’s contributions recognized even if you are someone who has always worked somewhat off the beaten path and at institutions that are not the conventionally elite ones. ASU invested confidence in me when it hired me, and I am glad that the academy has enabled me to offer this return on that invested confidence.”

Collins, an evolutionary ecologist, was chosen for his studies of the role of host-pathogen interactions in species decline and extinction. Collins uses amphibians, along with viral and fungal pathogens, as models for studying the factors that control population dynamics and has been one of the foremost leaders in addressing the global amphibian extinction crisis. He also studies the scientific, ethical and public policy issues surrounding the development and proposed environmental release of genetically modified organisms. 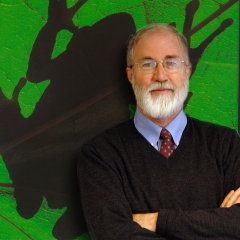 “As an internationally respected evolutionary ecologist, Jim Collins is deeply committed to applying his research expertise to critical conservation and policy issues,” School of Life Sciences Director Kenro Kusumi said. “He is a faculty role model as a scholar and public servant, who has been working tirelessly as an advocate for science and to advance STEM education.”

Collins has published more than 170 edited volumes, book chapters and peer-reviewed articles, including the book, “Extinction in Our Times: Global Amphibian Decline.” He has also mentored 23 master's degree students and 19 PhD students while also working for several leading organizations geared toward the advancement of science and the liberal arts, such as the National Science Foundation; National Academies of Sciences, Engineering and Medicine; Association of American Colleges and Universities; and Association for Women in Science. Additionally, he served on the National Science and Technology Council under presidents George W. Bush and Barack Obama.

“Receiving this honor reminds me that mentors matter,” Collins said. “I am grateful to all of those who helped me develop as a researcher and teacher. Students also matter. Throughout the years, undergraduate, graduate and postdoctoral students played a central role in my research. ASU’s support has been constant, providing the personal flexibility and exceptional colleagues needed to develop my research, teaching and service programs.”

The American Academy of Arts and Sciences was founded 240 years ago on the idea that the new republic should honor exceptionally accomplished individuals and engage them in advancing the public good. The academy’s dual mission remains essentially the same with honorees from increasingly diverse fields and with the work focused on the arts, democracy, education, global affairs and science.

African American communities are negatively affected by COVID-19 more than other ethnic minority groups because of enduring systemic racism and structural inequalities that exist in the United States, says an Arizona State University professor.Researchers are discovering that health differences between racial and ethnic groups are often due to economic and social conditions, lower access to healt... African American communities are negatively affected by COVID-19 more than other ethnic minority groups because of enduring systemic racism and structural inequalities that exist in the United States, says an Arizona State University professor.

Researchers are discovering that health differences between racial and ethnic groups are often due to economic and social conditions, lower access to health care and other existing heath disparities. Mako Fitts Ward, a clinical assistant professor with ASU’s School of Social Transformation and faculty lead of African and African American Studies, said all of these conditions have left the African American community especially vulnerable during the pandemic.

An educator, writer, facilitator and social justice advocate with over 15 years of experience teaching core principles of justice and social change to college students and advocating for racial and gender equity in communities around the country, ASU Now spoke to Ward about her observations on how COVID-19 has impacted the African American community. 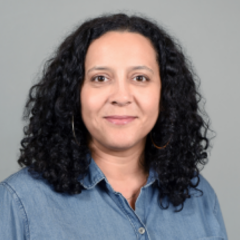 Question: News reports are stating that there’s a disproportionate amount of deaths in African American communities in large cities and rural areas. What do you account for this and what are some conditions that exacerbate the factors that put this community at higher risk?

Answer: The COVID-19 pandemic reveals longstanding racial health disparities where African Americans experience some of the highest risk factors across racial and ethnic groups. Factors that contribute to the higher death rates are the result of structural inequalities that reflect the intersection of economic, labor, housing and health conditions. These include the increased number of African Americans working in essential industries — especially black women — which increases the threat of exposure; decreased access to health facilities; higher concentrations of African Americans living in areas that are medically underserved, both urban and rural; overcrowded living conditions — e.g., from multigenerational households to criminal detention facilities; and historical mistrust of the health care systems due to conscious and unconscious racial and ethnic bias and systemic racism. All of this results in the precarity of survival for the most vulnerable communities across the U.S. during this pandemic.

Q: In a prior interview, you stated there is mistrust of the medical establishment by the African American community ever since the Tuskegee clinical studiesThe "Tuskegee Study of Untreated Syphilis in the Negro Male" was a 40-year clinical study that took place between 1932 and 1972 by the United States Public Health Service. It followed the medical journeys of 600 rural African American males in Alabama with syphilis, but doctors refused to tell patients or treat them in order to gauge long-term effects of syphilis. The deception led to an erosion of trust in the medical community by African American males, which continues to this day. were exposed in the early 1970s. Is that having an impact now?

A: The "Tuskegee effect" speaks to a sociological concern about how African Americans respond to and engage with the medical system based on legacies of race-based harm. I think we won’t know the full impact of COVID-19 infections and treatments until we have the necessary qualitative data on African American experiences during this time. Recommended guidelines from state and federal health agencies on preventing cultural bias in health care are necessary and important. Further data on the experiences of African Americans navigating these systems over the past five months will provide more accurate information to fully understand the impact.

Q: Are elected officials doing enough to draw attention to or address these inequities?

A: Politicians on all levels are naming the disproportionate death rates, from Congressional letters and gubernatorial press briefings to the Joe Biden presidential campaign releasing its plan to address African American communities. However, addressing structural inequalities requires long-term planning and strategic efforts that are much greater than media soundbites and social media posts can convey. Organizations like the African American Policy Forum, Color of Change and Black Women Organized for Political Action, along with data monitoring projects like the COVID Racial Data Tracker provide a model for what coalitions across research, policy and advocacy efforts should look like. These efforts can incite the necessary pressure on lawmakers to address structural racism at its root.