World-class scholar. Accomplished leader. True innovator. A major force. These are just several of the accolades Ayanna Thompson’s colleagues use to describe her.

Thompson joins Arizona State University this semester as the new director of the Arizona Center for Medieval and Renaissance Studies and a professor in the Department of English. 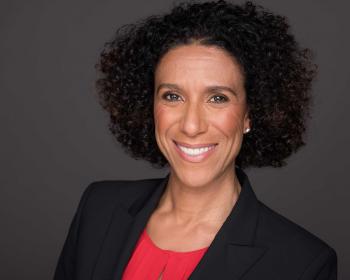 “I feel very privileged that she and I are coming to ASU at the same time,” Dean of Humanities Jeffrey Cohen said. “I, as a first-time person, her as a return. She brings so many good things to this place, including a love of ASU.”

Thompson left ASU to work at George Washington University five years ago. But she said she realized that around year three at GWU, when she referenced “we” in meetings, she still meant the team she had at ASU.

“The ethos, the whole drive of what we do here, striving to be the best and the most inclusive, are things that I’m passionate about. I kept referring to the ‘we’ as ASU, so it's a real homecoming. I feel like I’m in the right place,” she said.

Cora Fox, associate professor of English, has known Thompson since they worked together in the English department in 2004 and said ASU is lucky to have her back.

“Ayanna will transform the center,” Fox said. “She is a dynamic and visionary scholar and will bring renewed attention to the strength of ASU’s faculty in medieval and Renaissance studies.”

Thompson describes herself as a big thinker and appreciates that ASU allows people to think big. In her new position at the center, she has big ideas to help transform it into a major research hub.

“The center is amazing and has done great work but I do think it has operated as a niche research center. I want to blow it open. I want this to be the place, where everyone — whether they’re U.S.-, U.K.-, India- or China-based Shakespeare scholars — thinks of it as the cutting edge for medieval and early modern studies," Thompson said.

“This will be the place where people want to go to try out their new ideas, to make their work accessible to a nonacademic audience, to hit the most complex ideas that are affecting us currently and show us why these older materials impact the way we can think about new and better futures. My goal is for this to be the world-leading center for the study of medieval and Renaissance work. And we will do it in five years, this will be the place."

Building the center into one that appeals to students of all backgrounds is an important goal of Thompson’s. She didn’t grow up in a privileged family and said she never considered a career in academia or theater.

“I came from such a disadvantaged background; I thought success meant making a lot of money,” she said.

“If we, as a center, can encourage work that has crossover appeal, you get more students who would never have thought about going into this field going into it and more diversity, whether that’s economically diverse, racially diverse, gender-wise, everything — that’s the goal,” she said.

Tackling big or complex ideas is not a new undertaking for Thompson. While some in the field describe her as a Shakespeare scholar, her work is more interdisciplinary. She began her academic life as a historicist, working on issues in the early modern period, but then her work pivoted.

“I started asking questions about nontraditional casting and how that was being employed on stages. I was the first person to put together a book on this topic; it’s called 'Colorblind Shakespeare.' I didn’t realize at the time that it would be picked up by practitioners and theater companies. They use it to start dialogues about what they’re doing on stage. That moved me out of thinking about just the early modern period and moved me into thinking about what’s on stage now.”

Nontraditional casting is the practice of casting actors of color in roles that were originally imagined as white characters to be performed by white actors.

“What’s amazing is that the history of nontraditional casting in Shakespeare goes back to 1821, so it’s not new. It’s not something that happened in 1980; it has a huge, long history. But one of the issues is there is a discomfort in our country and the U.K., too, about talking about race openly, so companies that would start employing nontraditional casting didn’t have a way of talking about it and no one had given them a history of it.”

Susan Dudash, assistant director at the center, credits Thompson with pioneering the conversation about the performance of race.

“She has created the possibility for conversations that everyone else has been avoiding by addressing them head-on and creating a space in which the conversations can happen,” she said.

Thompson said her pre-academic life had a hand in helping her prepare for those conversations most were avoiding.

“I started off my professional life as an investment banker at Lehman Brothers in the oil and gas group. This was in an era where there were not women and certainly not women of color. And I felt like I developed a very thick skin then,” she said. “When I got to academia, I was like, wait a minute, we’re not talking about billions of dollars; let’s have the debate. While I hated that job passionately, I’m very grateful for the skill set that it gave me which is to be tough, strong, fight for what I believe in and to make people have the conversation with you face-to-face.”

Of all the milestones Thompson has achieved, she said the one she is most proud of is becoming the first scholar of color to be elected the president of the Shakespeare Association of America.

“When I joined that professional organization, there were not many scholars of color at all. I was able — through being elected first as a trustee, then vice president and now president — to put in some structural and programmatic changes that have made it much more inclusive,” she said. “I always felt of myself as a troublemaker in that organization so when my colleagues elected me to this position I was unbelievably honored and humbled by it.”

All Aboard with Coach Edwards Debuts Thursday at The Lodge

All Aboard with Coach Edwards Debuts Thursday at The Lodge