A new study by a research team from Arizona State University has found that climate change will dramatically increase the intensity of locust swarms, resulting in even more crops lost to insect pests and threatening food security.

The study, recently published in Ecological Monographs, outlines the results of considerable data gathered on the physiology of South American locusts, and demonstrates that species distribution models that consider physiology in addition to temperature may reshape what we can expect to see as climate change continues. 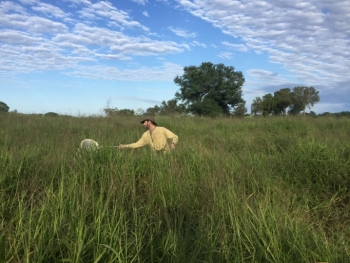 "One unique aspect of our study is that we combined many different research approaches, including field observations, laboratory experiments and computational modeling,” said Jacob Youngblood, recent ASU biology PhD graduate and first author on the study.

“To combine these approaches, we assembled a diverse team of researchers, which included physiologists, ecologists, entomologists and agriculturists. Collaborating with such a diverse team enabled us to study the effects of climate change on multiple aspects of locust biology."

The international team included researchers from ASU’s Global Locust Initiative: Assistant Professor Arianne Cease, President’s Professor Michael Angilletta and Professor Jon Harrison from the School of Life Sciences, and postdoc Stav Talal from the Global Institute of Sustainability and Innovation, as well as innovators and collaborators in South America.

Since at least the days of the pharaohs of ancient Egypt in 3,200 B.C., locusts have been erupting into massive swarms that descend upon crops and plant life, causing almost total devastation.

Why do these destructive swarms suddenly occur?

Just like people, locusts can be either shy or gregarious. For the most part, locust populations can spend several seasons in a low-density population, called a solitarious phase. The locusts are a cryptic brown or green — shy, solitary and relatively harmless on a global economic scale. However, when circumstances are just right, the locust numbers swell to overcrowding, triggering a drastic switch to a gregarious phase — social, brightly colored and capable of forming migratory swarms of 80 million locusts per square kilometer.

With each locust consuming up to 2 grams of vegetation every day, a swarm of this size can travel up to 90 miles a day, consuming the same amount of food as 35,000 people. It’s no wonder they are considered the world’s most devastating pest.

To help unravel the driving forces behind swarms, the team studied the physiology of the South American locust (Schistocerca cancellata).

"Conducting the research in Paraguay was really exciting for me because it was the first time I saw locust outbreaks in person,” Youngblood said. “Seeing tens of thousands of locusts together really made me realize how big of a problem locusts can be for local farmers and land managers.

“Most research on locusts has been performed on colonies that have been raised in the lab for years, so our research was a rare opportunity to study outbreaking locusts in their natural environment. This opportunity would not have been possible without the help of our colleagues in Argentina, Bolivia and Paraguay, who have been managing these outbreaks for the past seven years.”

To try to predict where swarms will migrate, and where crops will be threatened, scientists use species distribution models — computer algorithms that predict the distributions of a species across a geographic area using environmental data.

The most common modeling technique has been correlative models. However, given the unknown variables inherent in a changing global climate, this method has lost its efficacy.

The research team employed a mechanistic modeling approach, gathering data about locust physiology to inform their model. In this case, the researchers measured how quickly locusts digest food in different environments.

“Jacob’s study is a beautiful example, demonstrating that predicting how animals will respond to climate change, and helping humans survive and prosper despite climate change, is going to require in-depth studies of the intricate inner workings of our fellow biological organisms,” said Harrison. 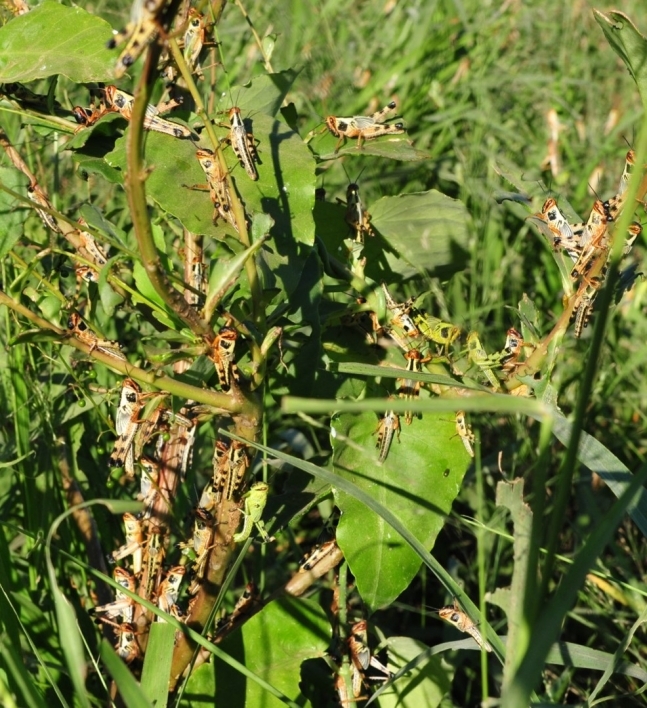 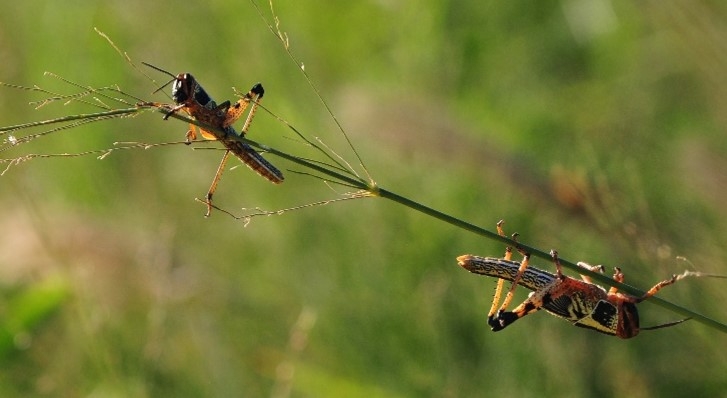 Locusts bask in sunlight to raise their body temperature while they are digesting food. 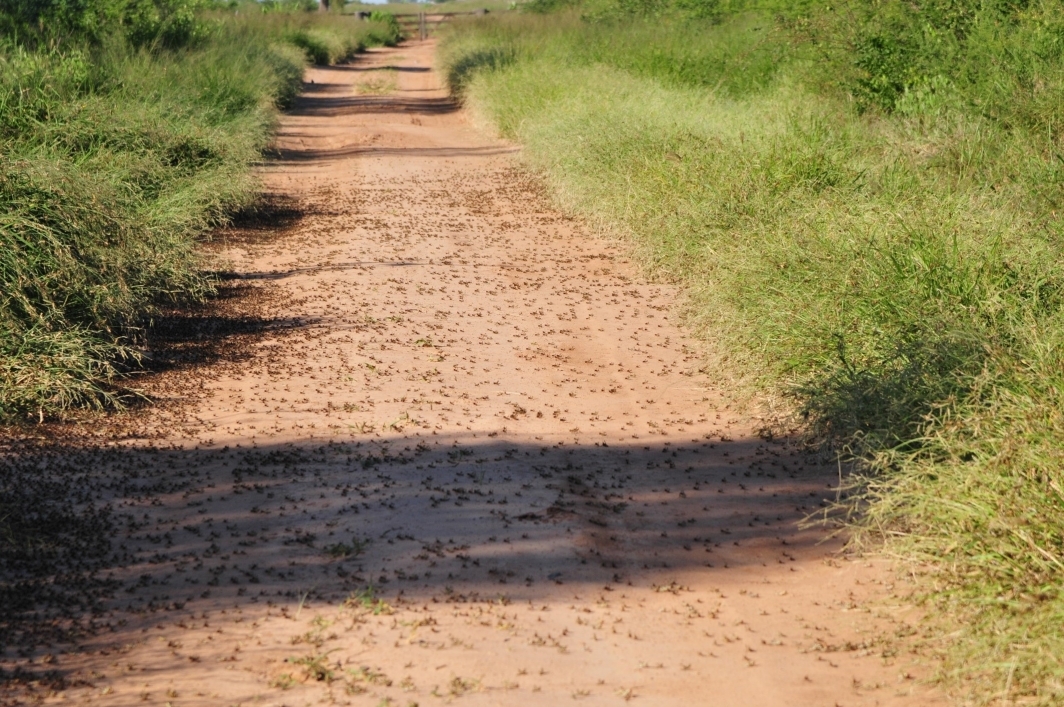 When in their gregarious phase, these locusts can form swarms of millions, capable of migrating 90 miles in a day and consuming as much food as 35,000 people.

The energy to swarm

A key factor of environmental data used for traditional correlative models is temperature, which has major impacts on locusts' eating habits.

However, this environmental data alone cannot adequately predict the effects of climate change on locust populations. First, locusts can exist and eat in a variety of temperatures. And as generalist herbivores who can travel long distances for readily available food, locusts can fill their stomachs with food faster than they can digest it.

While locusts can and will eat in a wide range of temperatures, the optimal temperature for digestion is much more specific.

Youngblood and his associates homed in on this element as a decisive criterion for a thriving locust population likely to result in outbreak scenarios.

The team measured how thermal conditions affected the rates of eating and digesting for field-captured locusts and used this data to model energy gain in both current and future climate scenarios. Next, they established this new data as a predictive variable for a new species distribution model that predicted the spread of locust outbreaks across multiple scenarios.

Their predictions show that locusts will be able to assimilate far more energy in future climates than current climates, between 8% and 17% more energy per wet season than currently, proportional to how much warmer it is.

Migratory populations of South American locusts are also expected to expand their range away from the equator due to climate change. Models that consider locust physiology actually predict a smaller range of expansion than typical correlative models, but the physiology-based models also predict an increase in population growth rate, resulting in even greater crop damage.

Previous models predicted crop loss from insect pests to increase by 10%–25% under climate change, but scientists did not know if these predictions were relevant to the South American locust. The new model created by Younglood matched the earlier models, predicting a 17% increase in crop losses from South American locusts.

"Climate change has become a keynote theme in scientific research literature,” said collaborator Eduardo Trumper of the National Agricultural Technology Institute in Argentina. “Plenty of it is correlational. The excitement of collaborating in this article stems from the exploration of likely mechanisms involved in the response of a high-impact agricultural pest to warming."

“Together, this information should help farmers and governments plan ahead for the next outbreak,” said Youngblood. “And although more research is needed, this physiological modeling approach could help predict outbreaks for other locust species too.”

This research is part of an ongoing partnership between ASU’s Global Locust Initiative (GLI) and national plant protection organizations, farmers groups and universities in Argentina, Bolivia and Paraguay that started at the beginning of the South American locust upsurge.

“Locusts are part of complex social-ecological-technological systems that require teams to work together across disciplines, sectors and boundaries,” said Cease, GLI director.

In 2020, GLI led a stakeholder workshop in Argentina to bring diverse participants together to formalize what they experience on a daily basis as locust governance.

“All of these stakeholders and areas of expertise are critical,” said Cease. “And understanding locust biology and being able to predict when and where outbreaks will occur is a key piece of the puzzle where we have surprisingly limited research globally, relative to the challenge. Jacob’s collaborative work building these models is an important advancement for biology and food security.”

Three Arizona State University alumni had their designs featured by Sun Devil Athletics and Sun Devil Campus Stores in honor of Hispanic Heritage Month this year.The alumni — Michael Torres, Justin Gilbert and Ivan Delvasto — collaborated with ASU communicators, Trademark and Licensing, and Los Diablos to create the designs, which were featured during the Sept. 24 ASU football game against ... 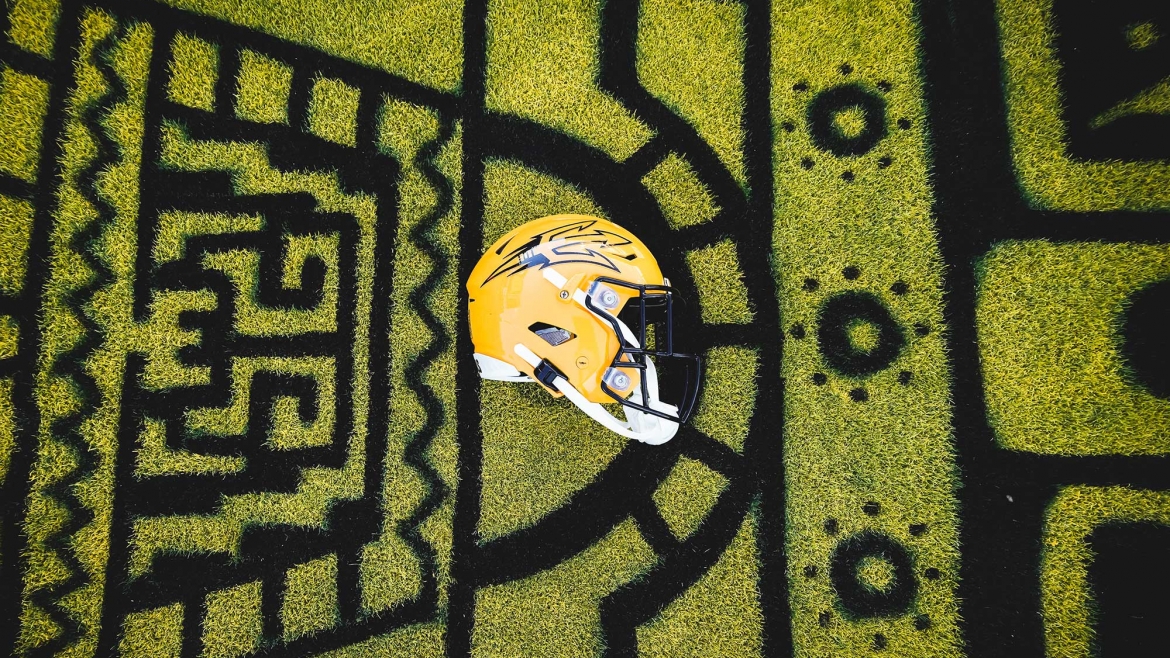 The alumni — Michael Torres, Justin Gilbert and Ivan Delvasto — collaborated with ASU communicatorsLindsay Kinkade, senior director of creative and Enterprise Brand Strategy and Management, and her marketing team won a Circle of Excellence, CASE award for the project. , Trademark and Licensing, and Los DiablosThe Latino chapter of the ASU Alumni Association to create the designs, which were featured during the Sept. 24 ASU football game against the Utah Utes both on the field and on Sun Devil merchandise.

Prior to the game, the designers visited Sparky’s Stadium Shop and the numerous pop-up shops where their designs were printed on T-shirts. One had an "El Sol" design created by Torres, and the other had a “Forks up, Los Diablos” design on the front that was created by Delvasto with Gilbert’s “Diablo’s Tail” design on the back.

At the game, the corners of the football field were painted with Mayan-inspired patterns created by Gilbert that came from his “Diablo’s Tail” design, while Delvasto’s “Forks up” design could be seen underneath the field goal in front of the Inferno student section.

Torres and Gilbert also had a private box for the game where they got a birds-eye view of their work, painted by Ground Manager Josh Lenz.

“We’re representing our culture in a way where a lot of people don't get a lot of recognition,” said Torres, whose logo was inspired by memories of the artwork and figurines he saw around his mom's and grandparents' house growing up. 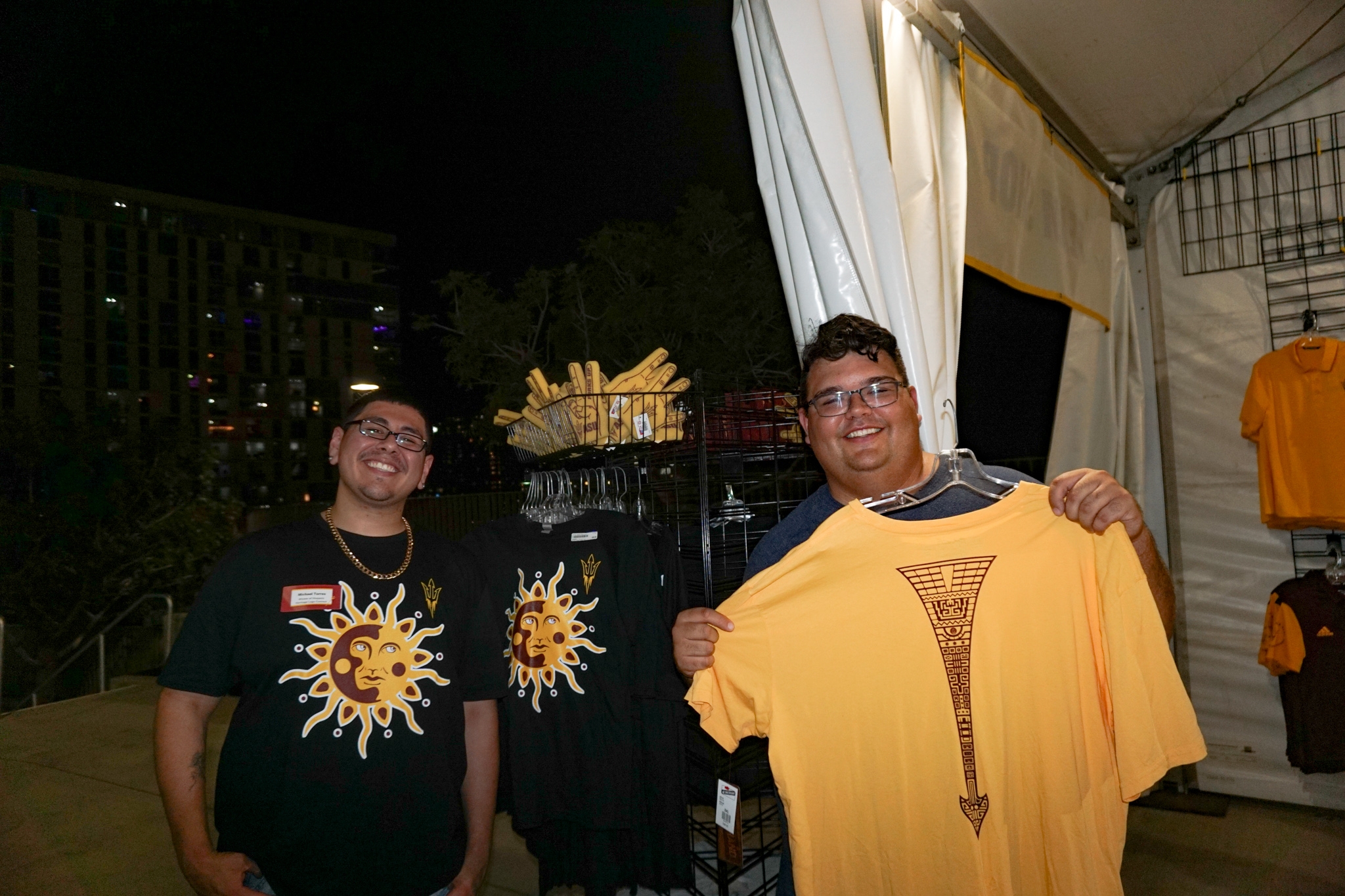 Michael Torres (left) and Justin Gilbert pose with to shirts with their logos at a pop-up shop at Sun Devil Stadium. Torres created the "El Sol" design, and Gilbert created the “Diablo’s Tail.” 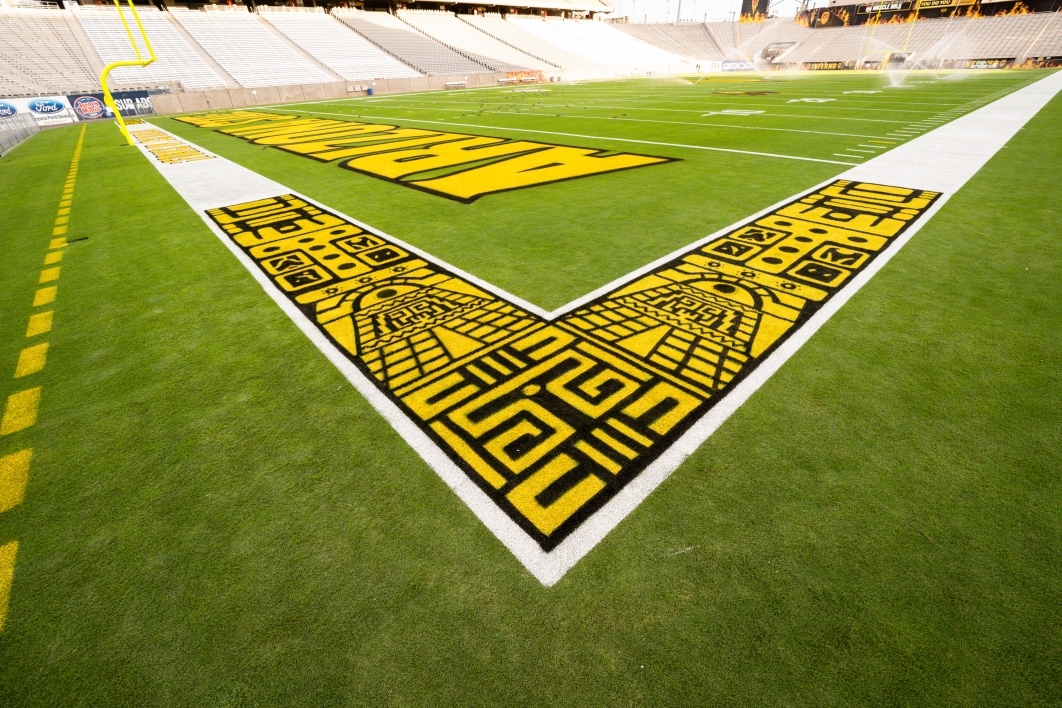 The corners of ASU football field were painted with Mayan-inspired hieroglyphics from Gilbert's “Diablo’s Tail” design for the Sept. 24 game. 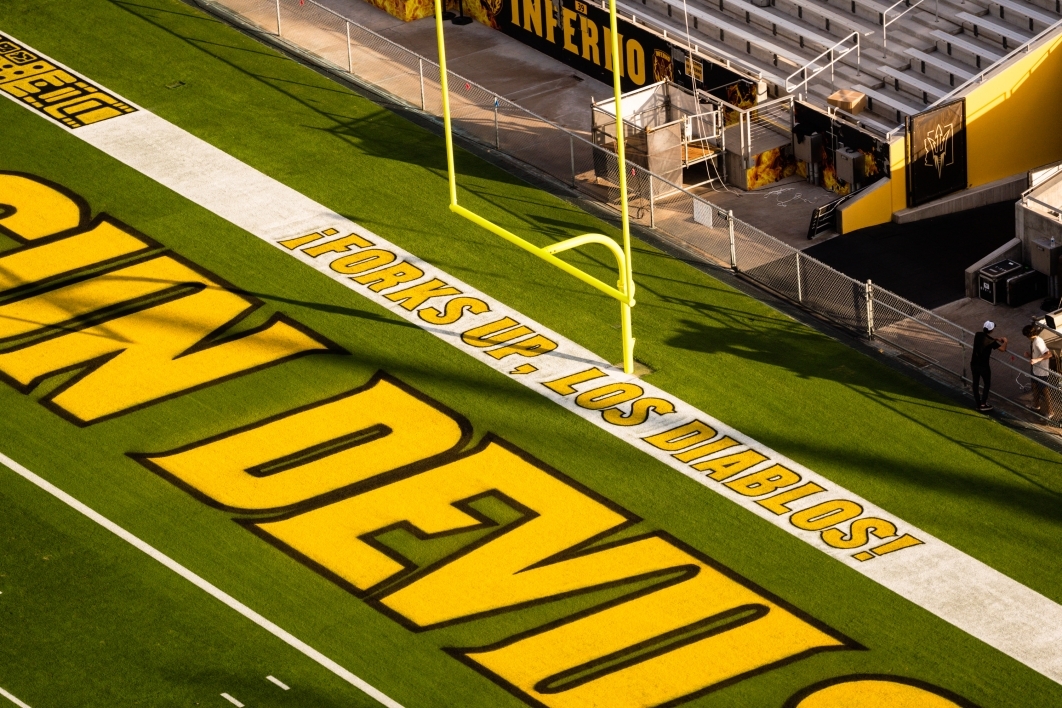 Ivan Delvasto’s “Forks up, Los Diablos" logo was painted on the ASU football field on Sept. 24.

Torres, who works as a digital designer at an inflatable pool company, said his visual communication design degree taught him essential graphic design skills that carry over into his career. He emphasized how the support from his family led him to his success.

“(My grandfather) literally put me through school and took care of me, like my grandma did,” Gilbert said. “And when I said I dedicated that graphic to them and my mom, those are the main people in my life that had a very, very good, profound, proud impact on me. And you know, without them I don't think I would be here, to be honest.”

Gilbert, who had difficulty finding a job post-graduation due to the pandemic, decided to create his own company, Kuvua Design, which helps Native American-owned businesses create brand identities. He identifies as Hispanic, Italian and Native American.

Gilbert said he recalled the stories his family told him about Mexico and decided to incorporate Mayan hieroglyphics in his design as a way to link his culture to the project.

“I think Hispanic culture ranges a wide variety of different cultures,” Gilbert said. “I thought about the Mayans and seeing like, how can I portray that, and I figured like the glyphs would be something that was ... important as far as Hispanic culture.”

Delvasto used his Colombian heritage as inspiration for his design. He teaches courses in the visual communications program at Northern Arizona University, where he focuses in editorial photography and design.

Torres said he's excited to leave his mark at ASU.

“To be a part of something and then realize, 'Oh my God, it's part of ASU’s history now.' I'm being recognized for something that I'm a part of,” he said.

“I'm leaving a little legacy behind at the school. And no matter what, I can tell my friends, my family about it and say that if I can do it, you can do it.”

The Hispanic Heritage Month merchandise is still available at the ASU bookstore. A portion of the earnings from the merchandise sales will go toward ASU cultural initiatives.