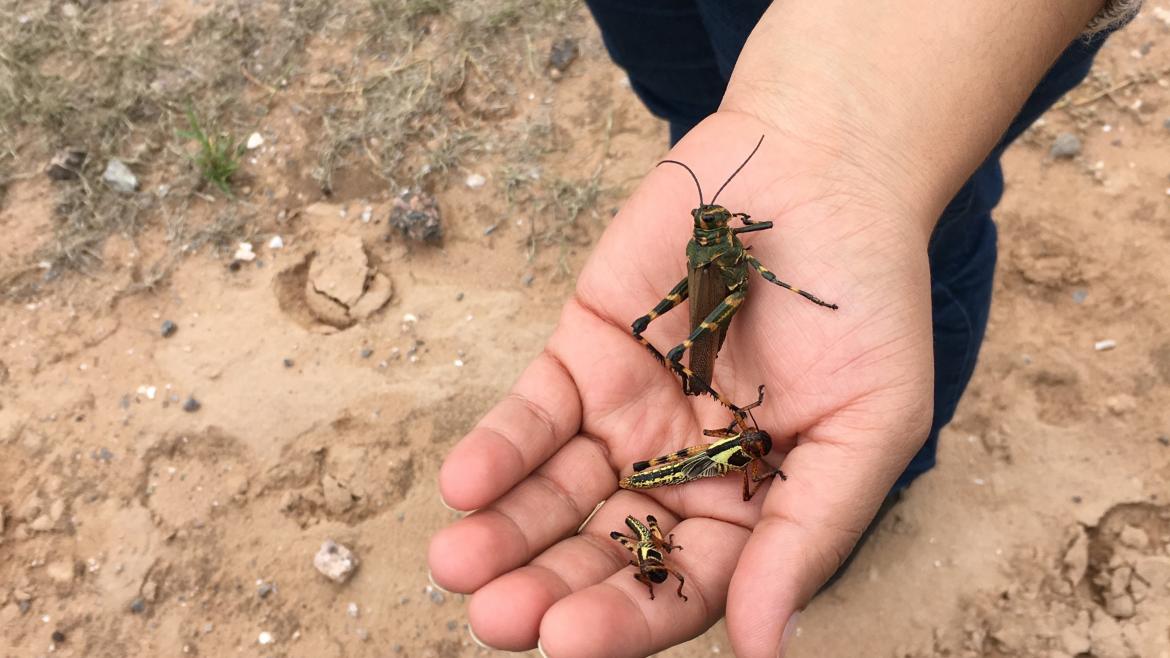 When an outbreak hits Argentina, Arianne Cease and her lab manager study hot spots with local experts to create solutions

The problem had been kept under wraps for so long that many had no idea what they were dealing with.

Some believe complacency had led to government budget cutbacks in locust monitoring, and many people who knew how to deal with locust plagues were retired.

“The locust upsurge slapped our faces and caused us to awake from a long nap,” said a government scientist.

Enter Arianne Cease, a scientistCease is an assistant professor in ASU’s School of Sustainability and a senior sustainability scientist at the Julie A. Wrigley Global Institute of Sustainability. at Arizona State University who studies how interactions between humans, plants and insects affect agriculture. She is an expert on locusts and has studied them worldwide.

“This is exactly the kind of thing we’re trying to position ourselves to be on the ground for when it’s happening,” Cease said.

She tasked Jenni Learned, a senior research specialist and manager of her lab, to find contacts.

Learned emailed everyone in the country who had anything to do with locusts. It took a few weeks of sleuthing. The standard email went like this: “Hey. We saw there’s an outbreak. Are you interested in us coming down there?”

Word got around. “They found out we were serious about it,” she said.

Learned hopped on a plane, went down first, scoped out the field sites and met with technicians from government agencies and government scientists. The Argentinians were happy to see her. 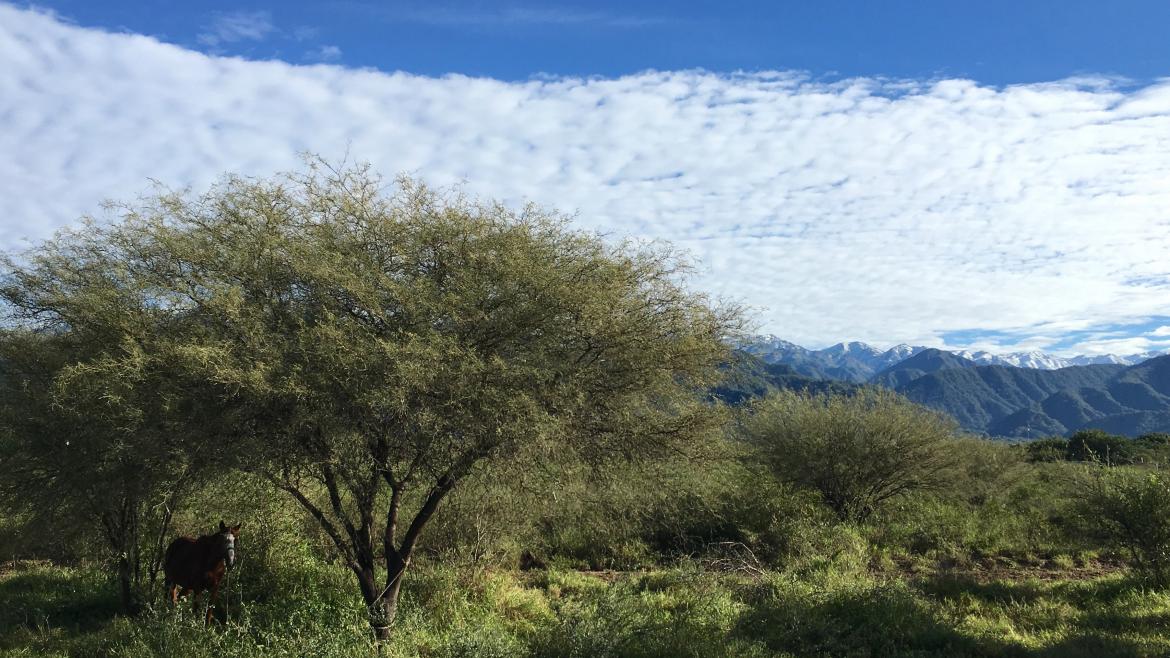 “Considering their experience and expertise on locust problems in different countries, it was decided that as part of our renewed efforts to learn more about the potential drivers of the upsurge, it was a good idea to assist Arianne and Jennifer in their field explorations and share experiences, knowledge and ideas for future work as we traveled through the hot spots,” said Eduardo Trumper, a researcher with the National Institute for Agricultural Technology (INTA) who studies the ecology and management of agricultural pests.

The locust upsurge startled the public as well as almost every researcher, consultant and government agricultural agent, according to Trumper.

“A few field scouts had given warnings that monitoring and control operations in the locust breeding areas were withering during the last years, probably as a consequence of budget cuts,” he said. “But perhaps it was not just a problem of less resources available but also a case of numbness and overconfidence after so many years without any outbreak occurring. First big lesson for us all: Do not take it for granted.”

Cease flew down in early May. She, Learned, Trumper and other expertsThe group included Jorge Frana from INTA, Carlos Maldonado and other experts from SENASA (Servicio Nacional de Sanidad y Calidad Agroalimentaria). hit the road for about two weeks, driving to trouble spots. Sometimes they were tipped off the same day by field scouts.

“Sometimes we could only know where we would head minutes before departure,” Trumper said of the field reports. “While traveling, Jennifer and Arianne told us about different aspects of their research projects and they asked us ... about different details of the environment, the livelihoods in the region, the agricultural and animal production systems, also details about the typical life cycle of locust in the region.”

The Argentinians provided matching funds for a two-day workshop in early May attended by university researchers and government officials.

Cease discussed how to approach the problem from a systems standpoint. Using a systems approach as a management tool for locusts has yet to be implemented on a large scale anywhere, she said.

This approach starts with good on-the-ground monitoring, coupled with centralized monitoring. When hot spots arise, field techs can deal with the problem by spraying before the locusts get out of hand.

One question Cease asked was, “Are there agricultural practices that promote large-scale outbreaks?”

Poor soil quality from overgrazing and a lack of crop rotation and plant nutrients can affect outbreaks. Some locusts like plants that are low in protein but high in carbohydrates.

There are 20 species of locusts. Some eat only grasses. South American locusts — the type in Argentina — will eat anything. Locusts live in recession zones: For this species, it’s forested, mountainous areas. They’re low-key in their own zones and can be difficult to find. When populations increase and become more dense, it’s a trigger that leads to swarms, which then spill over into adjacent invasion zones. 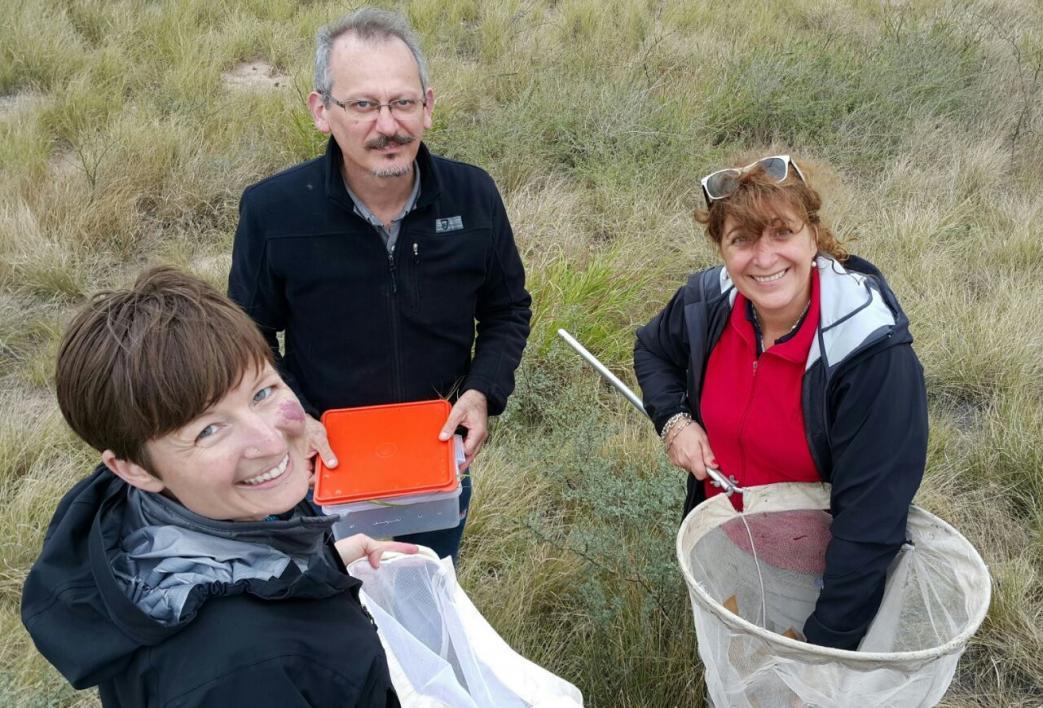 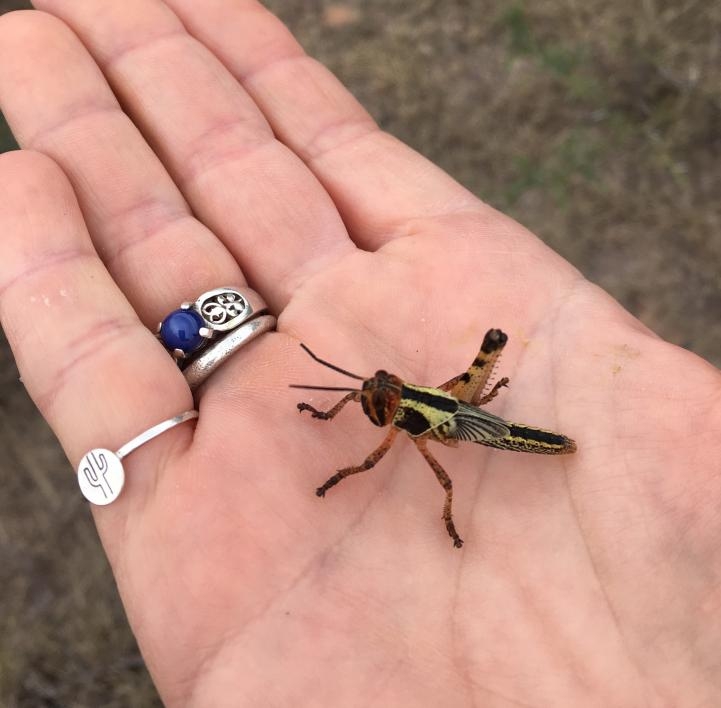 The S. cancellata nymph — the same type as the two smaller locusts in the top photo on this story — is the species behind the big outbreak in Argentina. 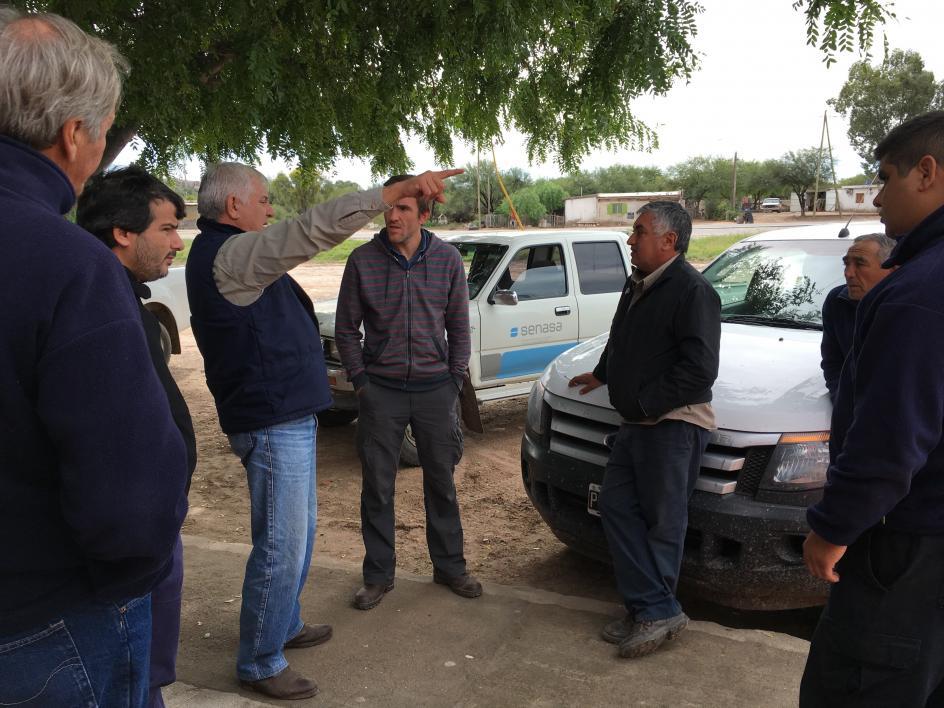 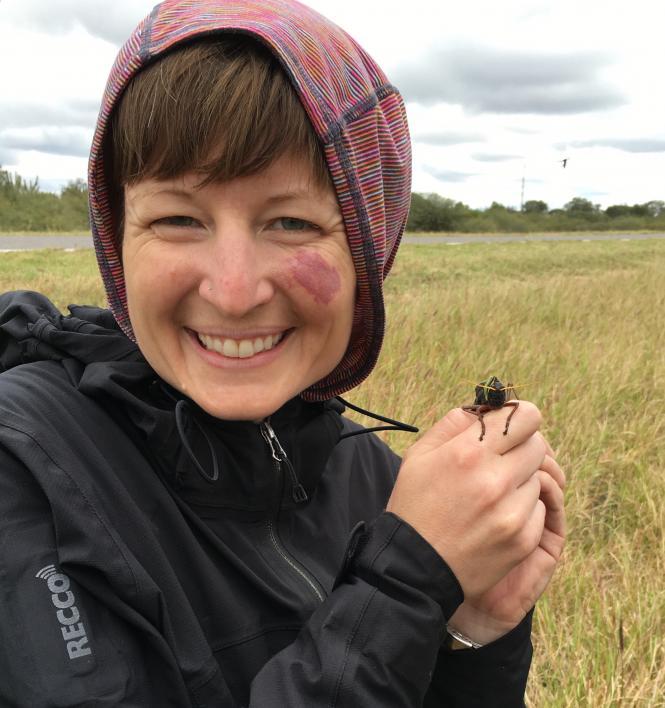 Arianne Cease has studied locusts worldwide. At a two-day workshop in early May attended by university researchers and government officials in Argentina, Cease discussed how to approach the problem from a systems standpoint. 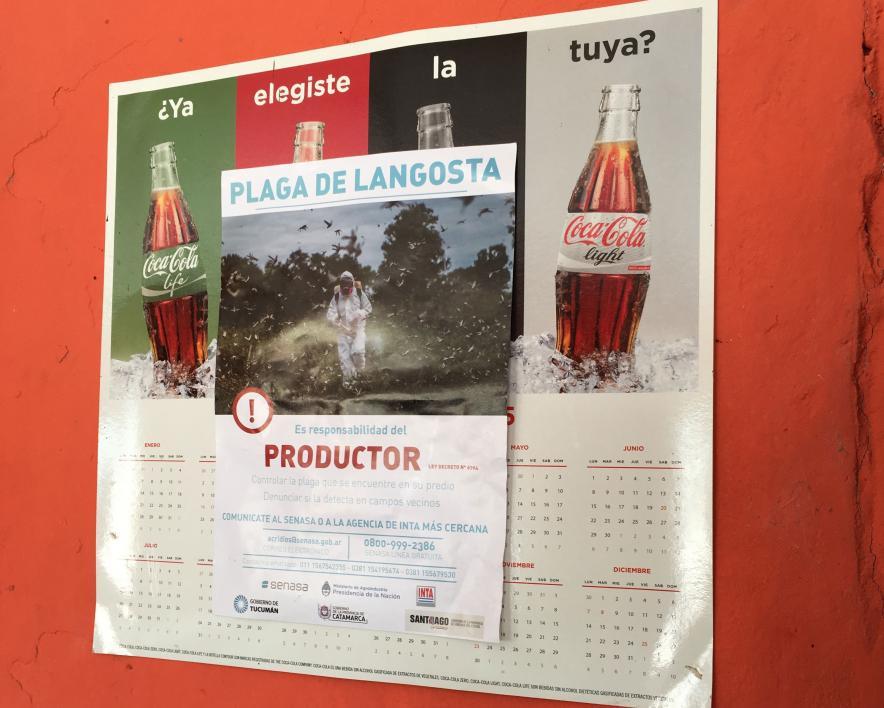 A poster in a restaurant reminds people to be aware of the outbreak and to do their part to help control it. ("Langosta" is the Spanish word for both lobster and locust.) 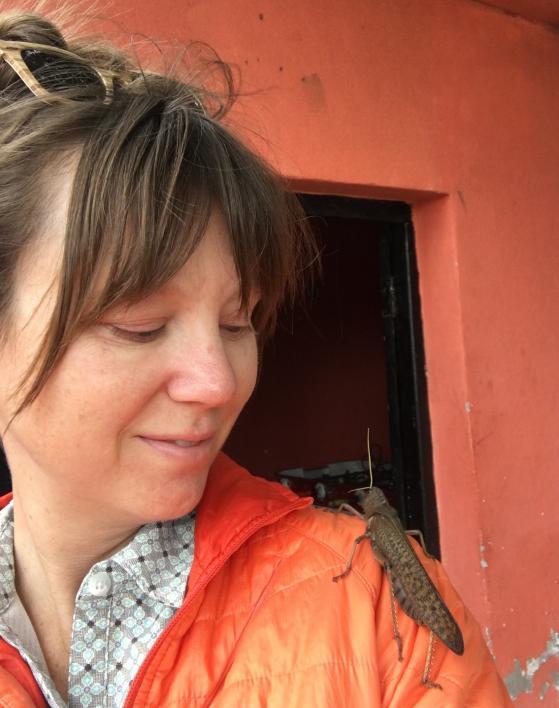 Jenni Learned, a senior research specialist and manager of Cease's lab (pictured with a rather large local specimen), was tasked with establishing contacts in Argentina and scoping out field sites.

“The plan for monitoring in Argentina is monitoring those recession zones,” Cease said.

Anecdotally, it seems when recession zones are decreased, it leads to more frequent invasions. This hasn’t been studied, Cease said.

The Argentine outbreak can be attributed to a perfect storm resulting from climate change, a good year for locusts, and budgetary cutbacks in monitoring. Like many problems faced by governments, if it’s not immediately rearing its head, they’re inclined to switch their attention (and money) to other priorities.

Argentina responded quickly in this case, and there wasn’t a big economic hit as a consequence.

“It was a good reminder their monitoring programs need to be kept in place,” Cease said. “They’re using this as a fresh opportunity to look at locust control. ... It was heartening to see the response to systems thinking.”

The trip ended with outlines for future collaboration. Because locusts were kept under control for so long, there was little opportunity for Argentinian researchers to keep up studies of the species, according to Trumper.

“Consequently, there are still many holes to fill in terms of biology and ecology knowledge of this species,” he said. “I believe that part of these holes, these knowledge gaps can be solved through collaboration with researchers who have been and still are working on locust problems around the world, and this is where we can build a partnership with Arizona State University.”

Cease is working on building a Global Locust Consortium. She hopes to launch the initial meeting later this year or early in 2017. One arm of the consortium will be a rapid-response team, to carry out missions like hers in Argentina.

Science is an international language, Learned was reminded on the trip.

“We really do have this common language of how science can help us address some of these global issues,” she said. “Every time I end up in these crazy places, I get a good reception. It was a very good experience.”