In a quest to make safer and more effective vaccines, scientists at the Biodesign Institute at Arizona State University have turned to a promising field called DNA nanotechnology to make an entirely new class of synthetic vaccines.

In a study published in the journal Nano Letters, Biodesign immunologist Yung Chang joined forces with her colleagues, including DNA nanotechnology innovator Hao Yan, to develop the first vaccine complex that could be delivered safely and effectively by piggybacking onto self-assembled, three-dimensional DNA nanostructures. 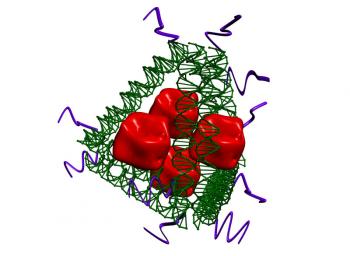 “When Hao treated DNA not as a genetic material, but as a scaffolding material, that made me think of possible applications in immunology,” said Chang, an associate professor in the School of Life Sciences and a researcher in the Biodesign Institute’s Center for Infectious Diseases and Vaccinology. “This provided a great opportunity to try to use these DNA scaffolds to make a synthetic vaccine.”

“The major concern was: Is it safe? We wanted to mimic the assembly of molecules that can trigger a safe and powerful immune response in the body. As Hao’s team has developed a variety of interesting DNA nanostructures during the past few years, we have been collaborating more and more with a goal to further explore some promising human health applications of this technology.”

Chang points out that vaccines have led to the some of the most effective public health triumphs in all of medicine. The state-of-the-art in vaccine development relies on genetic engineering to assemble immune system stimulating proteins into virus-like particles (VLPs) that mimic the structure of natural viruses – minus the harmful genetic components that cause disease.

DNA nanotechnology, where the molecule of life can be assembled into 2-D and 3-D shapes, has an advantage of being a programmable system that can precisely organize molecules to mimic the actions of natural molecules in the body.

“We wanted to test several different sizes and shapes of DNA nanostructures and attach molecules to them to see if they could trigger an immune response,” said Yan, the Milton D. Glick Distinguished Chair in the Department of Chemistry and Biochemistry and researcher in Biodesign’s Center for Single Molecule Biophysics. With their biomimicry approach, the vaccine complexes they tested closely resembled natural viral particles in size and shape.

First, the group had to prove that the target cells could gobble the nanostructures up. By attaching a light-emitting tracer molecule to the nanostructures, they found the nanostructures residing comfortably within the appropriate compartment of the cells and stable for several hours – long enough to set in motion an immune cascade.

Next, in a mouse challenge, they targeted the delivery of their vaccine cargo to cells that are first responders in initiating an effective immune response, coordinating interaction of important components, such as: antigen presenting cells, including macrophages, dendritic cells and B cells. After the cargo is internalized in the cell, they are processed and “displayed” on the cell surface to T cells, white blood cells that play a central role in triggering a protective immune response. The T cells, in turn, assist B cells with producing antibodies against a target antigen.

To properly test all variables, they injected: 1) the full vaccine complex 2) STV (antigen) alone 3) the CpG (adjuvant) mixed with STV.

“We were very pleased,” said Chang. “It was so nice to see the results as we predicted. Many times in biology we don’t see that.”

With the ability to target specific immune cells to generate a response, the team is excited about the prospects of this new platform. They envision applications where they could develop vaccines that require multiple components, or customize their targets to tailor the immune response.

Furthermore, there is the potential to develop targeted therapeutics in a similar manner as some of the new generation of cancer drugs.

Overall, though the field of DNA is still young, the research is advancing at a breakneck pace toward translational science that is making an impact on health care, electronics, and other applications.

While Chang and Yan agree that there is still much room to explore the manipulation and optimization of the nanotechnology, it also holds great promise.  “With this proof of concept, the range of antigens that we could use for synthetic vaccine develop is really unlimited,” said Chang.

INSPIRE, which stands for Integrated NSF Support Promoting Interdisciplinary Research and Education, was established to address some of the most complicated and pressing scientific problems that lie at the intersections of traditional disciplines. 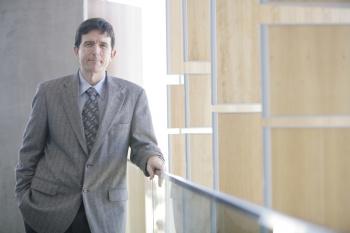 “Due to the convergence of new technologies, it has now become possible to create completely artificial systems with chemical complexity approaching that of biological systems, but integrated with electronics and computational design," said Neal Woodbury, who will be leading the grant effort along with Biodesign Institute colleagues Stephen Albert Johnston, Hao Yan, and Stuart Linsday, as well as Colin Wraight from the University of Illinois.

Woodbury is co-director of the Biodesign Institute’s Center for Innovations in Medicine and a professor in the Department of Chemistry and Biochemistry in ASU's College of Liberal Arts and Sciences.

The ASU team, led by Biodesign Institute researcher Neal Woodbury, will pursue research in “Digital Chemistry,” where scientists can build complex processes from small ‘bytes’ of single molecules hooked together in a precise pattern. Here, amino acids will be linked together to form peptides, small pieces of proteins, and these peptides will be used as the tethers to hold complexes of other biomolecules together.

“The complex chemical reactions that take place in us, and in all organisms, involve the orchestration of a tight, choreographed dance of molecules in time and space.  This ability to organize complex, dynamic systems at the molecular level is vital to life on Earth,” said Woodbury. “Now, we can envision a biomimetic approach to reimagining and redesigning complex chemistry and biochemistry, but with the added potential functionality of interfacing with our electronic world.”

Initially, the team will develop the conceptual framework and research tools to provide a proof-of-concept of their approach. They will focus on three research goals: to organize and optimize enzyme pathways using DNA nanostructures; remodel proteins involved in converting light to chemical energy in artificial photosynthetic reaction centers; and identifying cells and different stages of cell development to control their gene expression patterns through specific molecules.

All of these elements may eventually be used to develop molecular-scale devices that could be integrated with microelectronics to control complex biological systems.

Woodbury was just one of 11 recipients of the NSF INSPIRE award.

"INSPIRE is a great example of the vital role NSF plays in supporting highly innovative research and education projects at the intersections of traditional disciplines in science and engineering," said NSF Director Subra Suresh. "Through INSPIRE and other NSF programs, I encourage our nation's scientists and engineers to submit to NSF their most innovative ideas for interdisciplinary research."

Newly established for FY12, NSF created INSPIRE to fund interdisciplinary, potentially transformative research. Once fully implemented, INSPIRE will complement other NSF efforts with a suite of new, highly innovative NSF-wide activities and funding opportunities. INSPIRE awards are co-funded between the Office of Integrative Activities and other NSF offices and directorates. INSPIRE aims to widen the pool of prospective discoveries by supporting proposals that may be viewed as falling outside of other NSF programs and funding mechanisms.