Editor's Note: This article originally appeared in the March 2012 edition of ASU Magazine.

While economists vigorously debate the effectiveness of federal economic stimulus programs, Valley residents can glimpse physical remnants of 1930s New Deal programs from the Great Depression. Towns in the Phoenix metro area developed a host of infrastructure as a result of New Deal projects: city parks, streets, even curbs. 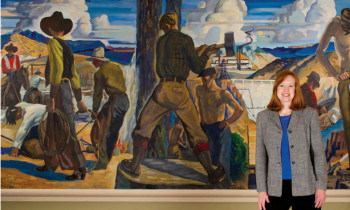 But perhaps the most surprising legacy of President Franklin Roosevelt’s economic recovery plan is the breadth of Arizona-based art fostered by the New Deal. According to Betsy Fahlman, an art history professor at ASU and author of the 2009 book “New Deal Art in Arizona,” the program’s cultural agencies, including the Works Progress Administration, were responsible for the creation of artworks and art organizations throughout the state, in the Valley and on the ASU Tempe campus.

This federal aid helped solidify the arts scene in the fledgling state, which was less than two decades old when the stock market crashed in 1929. The result was that an area long known for its “Five Cs” of cotton, copper, climate, citrus and cattle, grew in notoriety for a human-made quality: culture.

“The government bureaucracy that gave cultural support under the New Deal created a sense of community among the state’s artists where there had been none before,” says Fahlman. “It was during this era that culture emerged as a sixth significant C.”

Old Main, on the Tempe campus, is home to three artworks produced through the Public Works of Art Project (PWAP), an agency that enriched the state’s cultural legacy considerably, despite only existing for five months during 1933 and 1934.

“During that short span, Arizona received eight murals, 21 oil paintings, 30 watercolors, six oil panels and a design for a decorative fountain,” said Dianne Cripe, an ASU alumnus and expert on public art, who works for the City of Goodyear.

Two of the visual treasures that haven’t disappeared over the years are a pair of seven-foot by 16-foot murals by Joseph Morgan Henninger that reside in Old Main’s Tooker Boardroom and Basha Family Library. Trained at the Ecole des Beaux Arts in Paris, Henninger came to Phoenix in 1933 and was captivated by the geographic extremes presented by the Southwestern landscape.

“I find this part of our United States severe, austere and harsh ... it is all sharp in its outline. ... In a word, this country is dramatic,” he wrote in a letter home to his parents.

His painting “Industrial Development in Arizona” reflects several of the aforementioned economically important “C’s”: the raising of citrus and cattle as well as hard rock copper mining. Fahlman says of the painting: “The view he presents of modern Arizona ... (conveys) the strength of labor and hard work that symbolized the progress in a young state that would eventually triumph over the Depression.”

A less optimistic viewpoint colors Henninger’s other painting, “Spanish Influence in Arizona.” The painting is dominated by a dramatic central figure protesting the treatment of indigenous peoples. This figure is flanked by a scene portraying the baptism of Native American youth by Catholic missionaries, as well as a setting that depicts the use of native people as forced laborers.

A third PWAP-funded artwork on view at Old Main sits outside on the building’s front lawn. Emry Kopta’s three-foot stone “Kachina Fountain” replaced an earlier water feature in front of Old Main and featured four kachinas, considered guardians of well being in Hopi lore. Kopta, who came to the United States from his native Austria, designed a grand nine-foot-tall Hopi Flute Player sculpture to stand atop the fountain, but the project’s funding ran out before a casting of the bronze statue could be completed.

Luckily for art lovers, the story doesn’t end there. In 2002, in accordance with the wishes of the Hopi Tribe, ASU cast a six-foot-tall version of the flute player figure and installed it in the courtyard of the Music Building on the southwest side of campus.

The impact of the New Deal on the arts in Arizona seems beyond dispute. Fahlman points out that the cultural components in the state strengthened by the New Deal play a significant role in attracting and retaining a well-educated work force today. She had the opportunity to buttress this point in 2010, when she was tapped to edit the “Capitalizing on Arizona’s Arts and Culture” report to the 98th Arizona Town Hall.

“There is a wealth of hard information that supports precisely why the arts are important to Arizona’s economy and what a huge contribution they make to the state as a whole,” Fahlman said. “The arts and culture dollar is often stretched very thin, yet it makes an excellent return on monies invested, revealing that supporting the arts reaps positive benefits for the communities that invest in them.”

Herberger Institute for Design and the Arts Arts Alumni

This Saturday fans were excited and so were the Sun Devils.

The energy in the stadium was palpable as Joey DeMichele stepped up to the plate for the Sun Devils. With three runners on base and one of the best hitters on the team at bat, the fans slid to the edge of their seats as it seemed taking the lead from the Beevers was imminent. 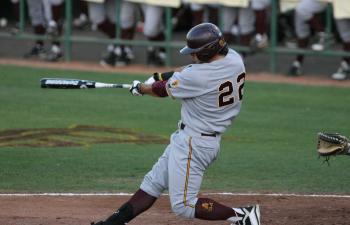 This was not the first time in the game that the Devils had the bases loaded, but it seemed that last time was sort of a "lazy" bases loaded as no one thought that a grand slam was possible. When DeMichele came up, there was finally a chance, and some hope. With each pitch the air would ebb and flow with the anticipation and subsequent release as the ball hit the catchers mitt. You could almost hear a collective sigh let out when the Sun Devil struck out.

Before fans could even catch their breath, Max Rossiter stepped up to the plate and hit a home run, vaulting the Devils into the lead. In one inning ASU went from down by one and not scoring in the game, to up by four going into the ninth inning. This shows the strength of the Sun Devils even when they're behind. Hopes looked bleak, especially since before that game, they had only swept one other series this season which was against western Michigan. It didn't matter though, because they kept their spirits up and ended up triumphing over the Beavers. You could have been there to feel this excitement flowing through the crowd, and the cheers roar through it when each and every one of those five runs came in.

This weekend when they come home to take on USC, they once again need a crowd to help cheer them on. Make sure you're not sitting at home when they sweep another series. Because there's no comparison to the energy that went through that crowd on Saturday. Don't miss out!