“I didn’t really have an idea of what was possible,” Chou says now. “I went into pre med. That was my compromise.” 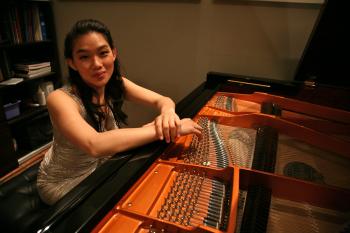 Eventually, she learned about the global health program in Arizona State University's School of Human Evolution and Social Change.

“At the time, I was looking for a safety in case med school didn’t work out,” she says. “I looked at the major map [and] I realized a lot of my pre med courses fit.”

Global health turned out to be more of a passion than a “safety.”

“I feel like it spoke to a lot of the different interests I have,” Chou says. “Global health is very much an interdisciplinary field; it incorporates the study of culture, the study of languages, the study of medicine and even the study of history. You can approach it from many different ways.”

She’s been selected as the Fall 2014 Dean’s Medalist for the School of Human Evolution and Social Change, and will be given special recognition at the College of Liberal Arts and Sciences convocation ceremony. The Dean’s Medal recognizes the academic and other achievements of the most outstanding graduating senior from each of the college’s schools and departments.

Last year, Chou did her honors thesis on the field of acoustic ecology, which she describes as “the intersection between art, science, acoustics, history and anthropology.”

“In my thesis, I sought to answer an overarching question that reflected my personal path at ASU – despite conventional boundaries between music and science, how have the two fields intersected throughout history, and specifically the 20th century?”

Working with Sabine Feisst, professor in the ASU School of Music, Chou looked at David Dunn and Andrea Polli, two sound artists who explore music that draws attention to environmental problems and sustainability issues. Feisst cites Chou’s thesis project as an excellent example of “how the arts and sciences can be negotiated in a meaningful way.”

Chou believes that “it’s a good time to be interested in a lot of fields.”

“I’ve come to realize that I enjoy incorporating all these things I’m interested in,” she says. “I’m really passionate about the importance of approaching these real-world issues from other perspectives.”

Her ideal scenario for the future involves more interdisciplinary research that both relates to medicine and allows her to mine her passion for history and her background in music.

The daughter of Taiwanese immigrants who both came to the United States for graduate school, Chou grew up in a household that managed to integrate Western medicine and traditional Chinese medicine “pretty well,” she says. And she did a global health study in New Zealand this past summer that showed her “this parallel existence of Maori practitioners and Western practitioners, and people going to both.”

“I think studying other countries’ traditional medicine has a lot to offer to our health care system,” Chou says.

“When you grow up in America now, being a doctor is one of the most respectable jobs, so you automatically think you want to be a doctor. But the truth is that there’s so much more to health and medicine. The great thing about global health is realizing that the health of a population as a whole depends on other factors, like the economy and understanding that country’s culture, their traditions.”

One of Chou’s favorite experiences at ASU has been studying the history of medicine with Jane Maienschein, director of the ASU Center for Biology and Society.

“We look at how medicine has changed over the past centuries, going back to the Greeks. It’s crazy to learn about, but at the same time, it makes you more cautious about being certain about things now.”

Chou was struck by the idea that the Western notion of helping third-world countries means either volunteering there for a couple of weeks or donating money, neither of which is effective in the long term.

“It was really eye opening to learn that there are ways to make lasting effects outside of those ways,” Chou says.

“Depending on how med school works out, I’m considering graduate programs, and I’m interested in the one Jane Maienschein leads,” Chou says. “I really loved her class. The best classes are the ones that challenge your personal outlook on things that are important to you.”

Grad finds aviating and geography on the same map

Geography graduate Joseph Keller excelled in his studies while continuing his career as a pilot. He has been recognized by the College of Liberal Arts and Sciences as the Fall 2014 Dean's Medalist for the School of Geographical Sciences and Urban Planning.

Grad finds aviating and geography on the same map

Joseph Keller knows how to manage complex operations and monitor delicate, changing situations. As a duty pilot manager and a captain on an MD-80 aircraft with Allegiant Air, Keller is responsible for being available by phone 24 hours a day to transmit operational information to his management and to airline safety authorities.

Asked about his work, Keller describes it in simple terms: “What we do is manage the flow of information during irregular operations for day-to-day issues,” said Keller. 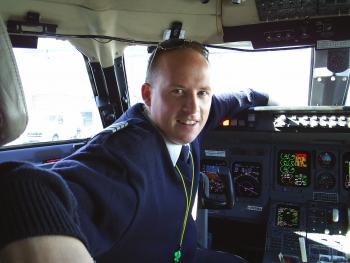 While managing aviation information, Keller has also been handling a whole other set of information. He graduates from Arizona State University this December as the College of Liberal Arts and Sciences Dean’s Medalist for the School of Geographical Sciences and Urban Planning.

Keller was selected as recipient of the dean’s medal for his outstanding academic achievement. He earned a 3.94 GPA and was named a member of the Phi Kappa Phi Honors Society.

Professor Michael Kuby, who taught Keller in a course on transportation, said the dean’s medalist added a great deal to his class’ atmosphere. “He really enjoyed getting into discussions with the grad students in the class,” said Kuby.

“The undergraduates in the class research a case study on transportation history and apply the concepts they learned to it, and his group’s presentation on the origins and geographic evolution of U.S. air mail service scored the highest in the class,” said Kuby.

Accustomed to considerable operations challenges, Keller pursued his geography degree full-time while also maintaining his full-time pilot schedule. According to Keller, his aviation experience led him to a keen interest in geography.

“Geography is a natural extension of flying in my eyes, as geography plays a huge role in weather, dynamics and airport position,” Keller said. “We are constantly using maps in the aircraft,” he added.

Professor J. Duncan Shaeffer, a member of the committee that selects dean’s medalists, said that Keller showed a willingness to go above and beyond from his first days at ASU.

“I remember he came to all the freshmen week activities when he first started, even though as a transfer student he wasn't obliged to attend any of them,” said Shaeffer. “He's been a great student, and he's quite deserving of this award,” added Shaeffer.

In working toward his geography degree, Keller has been able to develop new skills in a longstanding passion.

“I have been interested in aviation all my life. I got my private pilot certificate at the age of 17 and never looked back,” said Keller.

Keller said that through piloting, he has honed planning, management, finance and public relations skills. He decided that a geography degree would develop further skills and open up even wider possibilities.

Despite his high-pressure career and his considerable academic load, Keller has maintained a sense of humor.

“You never have too much fuel, unless you’re on fire,” Keller responded to a question about lessons learned from aviation – before quickly adding, “Just kidding,” and offering serious insights about how aviation and geographical sciences can work together.

Moving forward with his degree, Keller said his aviation background and his geography credential will complement each other.

“It's nice to know where you’re at as you’re flying along,” said Keller.

Keller plans to continue his work as a pilot. At ASU, he also became interested in European history and geography, and hopes to pursue a master's in that area in the future.

The School of Geographical Sciences and Urban Planning is an academic unit of the College of Liberal Arts and Sciences.