Moira is seeing Jeremy. Moira is single, but Jeremy is married – and a father. Big problem. Needs to be fixed.


How does it get fixed? 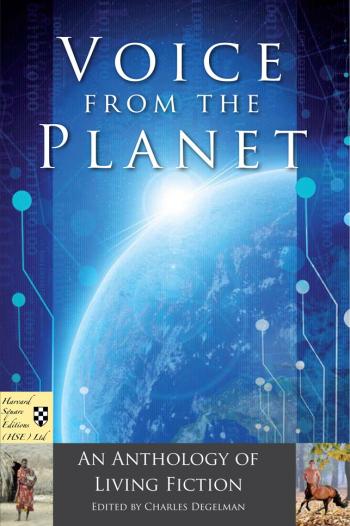 
J. Boyer, professor of English at Arizona State University, spins the tale of how Moira’s brother is called by their mother to put an end to the affair in his short story, “Frenching My Sister,” which is included in a new story collection titled “Voice From the Planet: An Anthology of Living Fiction.”


The anthology will be published Sept. 1 by Harvard Square Editions – but with a twist: The 30 authors are donating net proceeds from the book to Doctors Without Borders/Médecins Sans Frontières (MSF), an international medical humanitarian organization created by doctors and journalists in France in 1971.


Thirty writers from more than a dozen countries are included, with story topics ranging from war-torn Congo, the American rebellion of the 1960s and fire dancing in the mountains of Bulgaria to high finance on 9/11.


The anthology has yet another twist: the authors – who come from Congo, China, Peru, the United States, Bulgaria, Belgium, Canada, Brazil, Scotland, Finland, England and other countries – helped produce the book by asking their writer friends to submit work and pass the word, and by helping create new digital editorial processes and structures for such a far-flung publishing endeavor – all by e-mail and the Web. The editors also sent notices to creative writing programs and sought contributions via Web advertisements.


The initial call for stories was sent out by editor-in-chief J. L. Morin, who lives in Brussels, and editor Charles Degelman, in Los Angeles.


“We used every outreach available to contact writers around the world," Degelman said, “from personal contacts and references (quite successful) to online bulletin boards at universities, to writers' resources such as Duotrope Digest.”


Once the submission period ended, and the stories were in hand – 150 in all – Morin and Degelman, who have never met in person, began the process of winnowing them to the final 30, discussing and editing them by e-mail.


The electronic theme will continue when the book is published, said Morin and Degelman, because readers will be able to comment about the stories and contact the authors, whose e-mail information will be included at the end of each story.


“Voice From the Planet” is just the second book to be published by Harvard Square Editions, a press founded in 2009 that grew out of a discussion group on the Harvard website where participants lamented the fact that the publishing industry as becoming too corporate and top-heavy.


The first book, which also benefited MSF, was “Above Ground: An Anthology of Living Fiction,” published in 2009. This book also followed the format of enabling readers to talk to the writers – hence the term “living fiction,” Degelman said.


"The idea of a ‘charitable book’ came from Morin, who thought the best way to launch Harvard Square Editions was to create a philanthropic relationship with an effective, multinational human rights organization,” Degelman said, “and MSF’s international agenda dovetails perfectly with Harvard Square Editions' mission to develop a fiction without borders.”


Though Boyer didn’t graduate from Harvard University, he knew about Harvard Square Editions, and he knew about their past donation to Doctors Without Borders/Médecins Sans Frontières from the anthology “Above Ground.”


“I lived just beyond the Square when I was a young man, enrolled in some night classes there (at Harvard) as I was working toward my dissertation,” Boyer said.


“I can't recall off-hand how Harvard Square Editions first came into my line of sight, but what earned these good folk a place in my heart was that they were doing a series meant to benefit organizations like Doctors Without Borders, this at a time when the publishing market's as tough as nails and most publishing houses are very much looking out for themselves,” Boyer said.


“I can’t set a broken bone. I can’t raise a roof over the head of the homeless, I can barely hammer a nail, and if you send me out to raise money, the best I’ll be able to do for you is go door to door with a can in my hand begging change.


“I’m like most of us. Show me a disaster on television and I’m moved, I want to make a difference, but who am I? You’re better off with someone else, I’ll only get in the way. So when I learned that Harvard Square Editions was preparing an anthology meant to benefit Doctors Without Borders, I jumped at the chance to have my writing included.”


Boyer said he originally thought about writing a story about a concert musician from Tehran who finds, in the wake of 9/11, that he’s no longer welcome in New York City, even though he has come to think of it as home.


“In keeping with the spirit of the anthology, I meant to write about characters on a foreign shore who are trying to do good,” he said.


After several discussions, Boyer and the editor settled on “Frenching My Sister.”


“It’s about a man trying to protect his younger sister, trying to do good on the most foreign shores of all, those we think are familiar, only to learn that we’ve been wrong,” Boyer said.


So perhaps Moira didn’t need someone to fix that "big problem" after all.

(Voice From the Planet will be available Sept. 1 from Amazon.)

The City of Tempe wants your ideas on how to make our community more prosperous and efficient.

The City of Tempe wants your ideas on how to make our community more prosperous and efficient. Join the Technology, Economic and Community Development Council Committee at the Economic Community Forum on Business and the Economy, from 5:30 p.m. to 6:30 p.m., June 8, in the Don Cassano Community Room at the Tempe Transportation Center, located at 200 E. Fifth St.

Participants will be treated to a presentation on the state and future of the local and regional economy by Stephen Happel, economics professor at ASU’s W. P. Carey School of Business. Happel’s research focuses on microeconomic issues and demographics. He has written two textbooks along with numerous articles in the Wall Street Journal, the New York Times and the Christian Science Monitor.

In addition to Happel’s presentation, Sheri Wakefield-Saenz will give a review of Tempe’s economic development; Councilmember Corey Woods will discuss 2009 economic accomplishments; and Councilmember Onnie Shekerjian will lead the brainstorming.