Scientists from ASU, in partnership with the City of Phoenix, released a study this summer evaluating the city’s Cool Urban Spaces work. The report, Urban forestry and cool roofs: Assessment of heat mitigation strategies in Phoenix, evaluated two initiatives – the Phoenix Cool Roofs project and the Tree and Shade Master Plan – that aim to reduce extreme heat in Phoenix.

City officials will use the results of the report to take their next steps in addressing urban heat impacts. 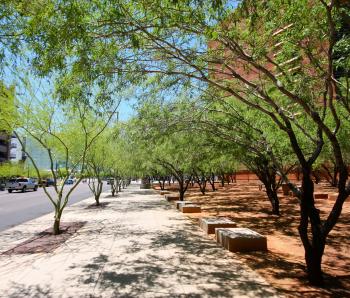 The problem and some solutions

The city's rapid urbanization in the past decades has led to increased warming because agricultural and desert terrain were replaced with buildings, concrete and pavement. These materials trap the sun’s radiation and slowly release it at night, altering natural nighttime cooling. According to climate researchers, nighttime temperatures in central Phoenix increased by approximately 9 degrees Fahrenheit between 1948 and 2000, while the average daily temperature went up by approximately 5.5 degrees Fahrenheit during the same period.

Such marked increases have made reducing the urban heat island effect a priority for scientists and city officials.

ASU researchers from the Center for Integrated Solutions to Climate Challenges and the Decision Center for a Desert City partnered with City of Phoenix Environmental Program and Parks and Recreation Department officials to conduct the study. The evaluation was part of a larger project funded by the National Oceanic and Atmospheric Administration and carried out in collaboration with the University of Arizona’s Climate Assessment for the Southwest (CLIMAS) program.

A major finding of the assessment was that, for a typical neighborhood in Phoenix, increasing tree canopy cover from the current level of about 10 percent to 25 percent could reduce temperature by 4.3 degrees Fahrenheit. For a bare neighborhood with no vegetation, adding 25 percent canopy could lead to a 7.9 degree cooling effect.

The evaluation also looked at the impacts of light-colored, reflective roofs (or “cool” roofs) installed on almost 70,000 square feet of city rooftops. The roofs had limited cooling potential as a stand-alone mitigation strategy. However, they could have a role in broader efforts as researchers found that they add to the cooling effect when combined with trees and landscaping.

State climatologist Nancy Selover, a professor in ASU’s School of Geographical Sciences and Urban Planning, worked on the assessment team and explained why trees are more effective for cooling.

“Urban forestry is better at cooling neighborhoods and yards than cool roofs because the shade prevents the ground surfaces and walls from heating in the first place, since they don’t receive so much direct solar radiation,” Selover said.

Cultivating shade trees in the city

With the urban forest’s beneficial impacts confirmed, the city wants to move ahead with planting more trees in its urban spaces. Richard Adkins, Forestry Supervisor for the City of Phoenix Parks and Recreation Department, said the goal is to reach 25 percent canopy by 2030. Current estimates place Phoenix’s urban canopy at around 10 to 11 percent.

According to Adkins, achieving this goal will require cooperation.

“Increasing the tree canopy has to be a public-private partnership,” Adkins said. “The majority of the land is held privately, not publicly,” he explained.

Private ownership of the land means that outreach is a priority. Adkins is working on initiatives to inform city residents about what the urban forest does and how increasing it could benefit them and their neighbors.

“People don’t grasp how important trees are,” Adkins said. “By placing trees around the south and western sides of their homes, people can save money. It shades the home and keeps the sun from hitting onto the roof of the house where heat gets taken in, so people have to spend less in cooling.”

Adkins said that those hesitant to plant trees often argue that it will increase their water bill or that it wastes water resources. While he recognizes these are concerns, Adkins does not consider the wasting water argument to be valid. He holds that trees are an efficient use of water because they help maintain water in the ground. However, he does advise planting drought tolerant trees that are suited to Phoenix’s desert climate.

“You have to be very thoughtful in your species selection,” Adkins said. “I’m all about the right tree in the right place,” he said.

Adkins suggests residents consult the National Tree Benefit Calculator website to help determine what tree may be right for their property. Visitors to the site can select a tree and see the projected benefits on factors such as electricity use, air quality and property value.

Challenges to growing an urban forest

While having trees provides documented cooling benefits, the perceived costs of increasing vegetation can be a challenge. Research suggests that this is as true for private residents’ efforts to find foliage as it is for city tree projects.

According to Selover, data from previous ASU research shows that certain areas of the city lack trees. For instance, Black Canyon Freeway is one of the hottest neighborhoods in Phoenix and has few trees. It is also one of Phoenix’s lower-income neighborhoods.

Sharon Harlan, a professor in the School of Human Evolution & Social Change, led a team of researchers that looked at this “green gap” in neighborhood microclimates in Phoenix. They reported that low-income and elderly residents in hot neighborhoods often have less means to cope with the heat, as they may not have access to air conditioning and pools, and their communities do not have trees to provide natural shade and cooling.

“Our surveys have shown that residents in low-income neighborhoods are dissatisfied with the absence of trees,” explained Harlan.

“People in low-income neighborhoods generally express a desire for trees because it 'beautifies' their neighborhoods and makes them cooler,” she said. “However, many have told us that they cannot afford the cost of watering trees in their yards. If you don’t have the money, you don’t have it – no matter what the benefits of trees may be.”

For her part, Selover encouraged finding a feasible way for the city to work with low-income areas to increase vegetation.

This fall, Selover and other ASU researchers are collaborating with the Phoenix Neighborhood Services Department on an urban forestry project in the Wilson School District neighborhood. The project hopes to engage students, their parents and others in the neighborhood in the planning and implementation of the project as a means of educating them on the benefits of trees and other vegetation – as well as the care and maintenance of these home-cooling assets.

The Center for Integrated Solutions to Climate Challenges and the Decision Center for a Desert City are units of the Julie Ann Wrigley Global Institute of Sustainability. The School of Geographical Sciences and Urban Planning is an academic unit of the College of Liberal Arts and Sciences.

Four faculty members in ASU's Mary Lou Fulton Teachers College were honored for demonstrating excellence in the field of education through exemplary scholarship, research and teaching.

Receiving 2014 Teachers College Faculty Awards, ASU professors Michelene Chi, Sarup Mathur, Josephine Marsh and Lauren Harris were lauded for their contributions to the field that are helping transform the way we think about education on local, national and global scales. 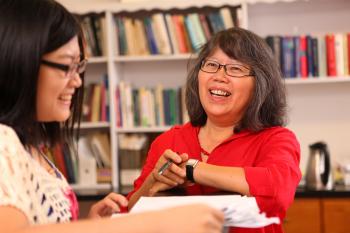 The award recipients were recognized at the college’s Sept. 19 meeting for faculty and staff, where Mari Koerner, dean of the Teachers College, presented the awards.

A cognitive learning scientist, professor Michelene Chi focuses her research on learning and education. Her work is cited extensively in scientific papers and has been empirically acclaimed by the learned societies.

Chi keynoted at the 2014 International Conference on Conceptual Change in Bologna, Italy, and is a member of the National Academy of Education, a founding fellow of the Cognitive Science Society, and a fellow of the American Educational Research Association (AERA).

She received the 2013 Sylvia Scribner Award from the AERA and the 2014 William Elgin Wickenden Award from the American Society for Engineering Education. She was recently appointed chair-designate of AERA’s Research Advisory Committee.

As co-principal investigator and academic director of the India Support for Teacher Education Program (In-STEP), Sarup Mathur, associate professor, is helping to expand the impact of Teachers College across the globe. In her role, she is creating a shared vision and common understanding of teacher preparation between educators in India and at ASU.

Outstanding Integration of Scholarship with Teaching

In addition to her role as associate professor of literacy education, Josephine Marsh is the professor in residence at ASU Preparatory Academy (ASU Prep).

Since 2011, she has worked with ASU Prep administrators and teachers to integrate scholarship with teaching, creating academically rigorous and supportive teaching and learning environments for K-12 students from a wide range of backgrounds.

She is at one or both of the ASU Prep campuses every day, providing “just-in-time” professional development, and using ethnographic and action research methods to build knowledge about instructional methods and the school transformation process.

One of the core principles of Teachers College is to “conduct, support and disseminate research that impacts educational thought and action.” Lauren Harris, assistant professor, has exemplified this principle since her arrival at ASU.

Her research areas include disciplinary literacy practices in history, and how teachers and teacher educators can help students make global connections. Harris consistently identifies ways her work can be applied and useful to the K-12 classroom through her use-inspired, grounded research.