If Joshua Gigantino sounds like he has arrived from the future, that’s because his unique perspective on art and technology inspires him to foresee uncommon possibilities.

“Space and computers have been my obsession since childhood, but always through a creative lens,” says the graduate from Arizona State University’s Herberger Institute of Design and the Arts. He is receiving a Master of Science in Design (MSD), with a concentration in new product innovation. 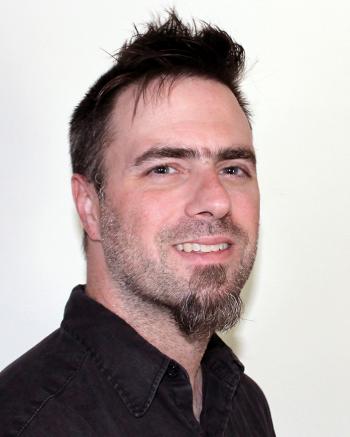 The convergence of his knowledge and skills in design, technology and space resulted in the BodyWare project, which are wearable devices for space travel and for earth. His research projects include knee braces, backpack harnesses, measuring tools and crash harnesses.

Among other possible applications are prosthetic limb attachments, custom sizing for clothing and bags, and a class of body-based robotics.

The BodyWare project foresees design solutions based on a comparison of body-mapping acupuncture techniques with “lines of non-extension,” areas in which the skin does not stretch during most normal movements.

Gigantino completed his undergrad degree in fine arts at the Massachusetts College of Art. After 15 years in industry, he tried a “warmup” semester at other colleges before joining The Design School at ASU. “Master’s study was the best way to bring what had been an advanced hobby into my professional sphere and ASU has helped make that happen.”

“Design research is unique and in demand in the U.S., but most schools focus on studio skills and only teach a limited toolkit of research techniques,” he says. “I'm really interested in the give-and-take between realms of knowledge and how that can be used in new ways.”

“ASU has a great combination of research opportunities, strong cross-disciplinary support and rigorous academic standards,” he adds. “The Design School in the Herberger Institute at ASU combines analysis skills from the social sciences (primarily anthropology and visual sociology) with solving design problems.”

Gigantino reached out to the School of Earth & Space Exploration (SESE) for cross-disciplinary collaboration in his space travel designs. He also served as graduate advisor for SEDS (Students for the Exploration and Development of Space) and helped with the SpaceVision 2013 conference, which brought 350 student explorers together with top names in space, like Bill Nye the Science Guy and Phil Plait. SEDS won chapter of the year for 2013 based on diversity, programs and outreach efforts.

He is the first in his family to receive a graduate degree, and says he was encouraged and supported by his extended family. What he found most challenging was recovering from a heat/stress-induced seizure at the end of his first year in graduate school.

Although Gigantino had always been physically fit with Kung Fu, Tai Chi, cycling and “anything in the water,” he now adds riding his bike and a minimum amount of cardio and stretching every morning into his busy schedule. “It is hard to find the additional time to get to the gym, and my biggest challenge has been staying fit post-seizure.”

After graduation, Gigantino has plans extending far into the future. “My next steps are finding an appropriate PhD program to provide a technical environment to nurture the BodyWare technology while I build another startup.

“The first of these startup projects will be supporting the MarsTrac open-source analog Mars rover. I'm looking forward to testing some of my projects in Utah, at the Mars Desert Research Station, and hopefully in Antarctica. This may sound ‘out there’ but eventually, I want to grow trees in space and build stations in Mars’ orbit to help others travel further.”

A combination of design research with technical and creative skills for space-related development points to an interesting future for Joshua Gigantino.

“I want to get into space-related work that will lead to research and development in exotic/dangerous locations and develop interesting new products.”

Lillian Ostrach will follow a unique family tradition when she graduates with her doctoral degree in geological sciences.

Lillian Ostrach will follow a unique family tradition when she graduates with her doctoral degree in geological sciences from ASU’s School of Earth and Space Exploration (SESE).

She will be hooded while wearing her 90-year-old grandfather’s doctoral regalia during commencement ceremonies. Dr. Simon Ostrach will proudly watch as his granddaughter carries the College of Liberal Arts and Sciences gonfalon during opening ceremonies. 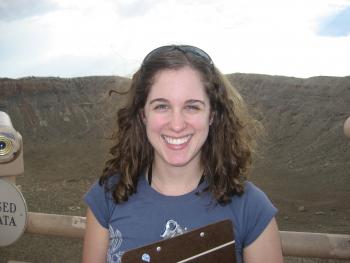 “I am the fourth person in my family to earn a PhD, and the first woman,” she says. “I was raised to value family and family traditions, and one tradition we have is that each PhD wears my grandfather’s doctoral regalia during the commencement ceremonies.”

The regalia was originally purchased in 1950 and worn by her grandfather when he earned a doctoral degree in applied mathematics, and then later worn by her father (neuroscience) and her uncle (comparative pathology).

Science seemed a natural path for Ostrach. “I have always had a love of the outdoors (especially rocks), and from an early age my parents and grandfather exposed me to science and math,” she says. “My father and grandfather both worked for NASA, so space exploration was a large part of my childhood, and I became fascinated (as many young children do) with the planets and workings of the solar system.”

Yet she didn't plan on becoming a geologist or planetary scientist until she took a few geology classes during her undergraduate studies at Brown University.

“I realized my passion. I really wanted to research landforms and geologic processes on other planets.”

After earning her bachelor’s and master’s degrees in geology, with a focus in planetary geoscience from Brown University, Ostrach decided to complete her doctorate at ASU.

“I was attracted to ASU because, out of all the programs in the country, SESE offered a multi-disciplinary approach to science education. SESE emphasizes collaborations, discussions and education across traditional field boundaries, and I embraced the potential for multi-disciplinary research.”

Recognition of Ostrach’s talents has been extensive. She has presented at international conferences, including the Lunar and Planetary Science Conference in Houston, and received the ASU SESE Rock Star Geology Student Award in 2011, the SESE Graduate Student Merit Award in 2010, and received travel grants for field workshops and conferences. Participation in workshops and field camps enhanced her skills and knowledge in planetary volcanism and impact cratering.

As a scientist, she believes in the importance of outreach to make science more accessible to the public. As a woman in science, she wants to inspire young girls and young women to explore opportunities in STEM (science, technology, engineering and math) fields.

Volunteer and outreach activities have been frequent during her studies at ASU, including SESE open houses, the Phoenix Zoo Prowl and Play, Hands-On Science Days, guest lectures for groups and K-12 teacher workshops.

Ostrach will begin a postdoc fellowship at the NASA Goddard Spaceflight Facility in early January, where she will continue studies of the impact cratering process.

“I can expand a comparative planetology investigation included in my thesis to the global scale, in addition to beginning new projects with my new advisor and colleagues.”

Extracurricular activities include eclectic tastes, extending from being an avid reader of many genres to Broadway musicals, weight lifting, swimming, baking and crocheting. “However, if you asked my friends, they would all say that I’m a huge 'Doctor Who' fan.” The popular sci-fi television show inspired a collection of Doctor Who items that she owns or has made, and even a Doctor Who-themed wedding.

“Writing a dissertation is a lonely process,” she says, “but earning a PhD is essentially a group effort.” Ostrach mentions a very long list of people who provided help, friendship and guidance, including ASU staff, faculty, fellow graduate students and postdocs.

“A few key people must be named because they were instrumental along the path: my advisor, Dr. Mark Robinson, who taught me how to be a better scientist; my parents, who prompted me to follow my dreams no matter how far away or 'out there'; my sister Sarah, who supported me through the good, bad and ugly of graduate school; my husband Jack, who waited for me for eight long years of long-distance; and lastly, my Grandpa, who inspired me to follow a path of my choosing.”