Finding 'Mr. Right': How insects sniff out the perfect mate

You may want to ramp up your romance this year by sharing a candlelight dinner, a walk on the beach, or even the scent of a perfume, but will that help you find your perfect mate? For one wasp species, it only takes a whiff of his special love potion to know whether he’s “Mr. Right.”

Unlike humans, most insects rely on their sense of smell when looking for a mate. Scientists have found that sex pheromones play an important role in finding a suitable partner of the same species; yet, little is known about the evolution and genetic basis of these alluring smells. 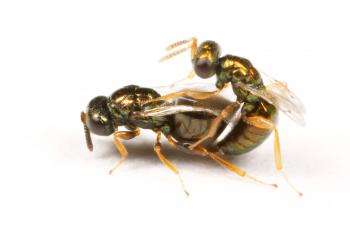 A team of researchers from Arizona State University and Germany found that one wasp species has evolved a specific scent, or pheromone, which keeps it from mating with other species. In addition, they discovered that the genetic basis of the new scent is simple, which allows the males to change an existing scent into a new one. Over time, the females recognize and use this new scent to distinguish their own species from others.

Scientists from ASU, the University of Regensburg, the Zoological Research Museum Alexander Koenig Bonn, and the Technical University Darmstadt in Germany, present their findings in an article published Feb. 13 online in the journal Nature.

The researchers studied two species of the parasitic wasp genus Nasonia to learn about the evolution of sex pheromones. They asked, if male sex pheromones are used as unique mating signals to attract females, and if female wasps will not mate with males that have different pheromones, then how did the vast array of these scents evolve in insects?

They found that the pheromones of all known Nasonia wasps contain two elements except for one species, Nasonia vitripennis, which uses a novel third ingredient. These tiny wasps, less than half the size of a grain of rice, lay their eggs in developing flies. The two species in this study prefer laying their eggs in similar types of flies and are found in the same parts of the Eastern United States, which means they have many opportunities to choose the wrong mate.

“We identified a gene in N. vitripennis that we thought was responsible for its unique scent,” said Josh Gibson, an ASU doctoral student working with Jürgen Gadau, a professor in School of Life Sciences in the College of Liberal Arts and Sciences. “Then, we successfully conducted an experiment to suppress that gene, which actually changed the composition of the sex pheromone, so that it resembled that of the other species,” Gibson added.

Female N. vitripennis wasps did not respond when offered the new pheromone alone. They responded only when it was combined with the two original, or ancestral, scents. In addition, females from a closely related species, Nasonia giraulti, did not distinguish between the new and ancestral sex pheromones, regardless of whether there were two or three scents.

Thus, the researchers concluded that the N. vitripennis females did not react to the third component when it first evolved. Instead, they adapted to the new smell over time and now it is an integral part of the species-specific sex pheromone of N. vitripennis males.

This study is one of the few where researchers have identified genes that prevent a species from breeding with another closely related species. The findings provide new insights into the evolution of genes that contribute to speciation, or the formation of new species, as well as the evolution of diverse sex pheromones.

“The females use this smell to distinguish between the species,” said Gibson. “This is important. If an individual wasp were to mate with a different species, it would be very costly because they would not produce viable offspring. We learned that the smell difference is based on a single and simple chemical change. Basically, this is the way the female wasp can find Mr. Right.”

Six Tibetan singing bowl robots, each carrying two singing bowls that produce pure sustained tones, will fill the room with an omnipresent series of harmonics. In contrast, oscillating cymbals produce an earthy, gritty and urgent intervention, marking out the sound field in a dynamic manner. 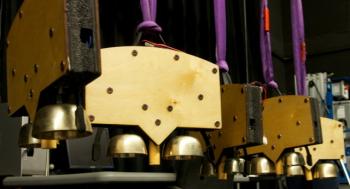 “This aural adventure will truly allow visitors to ArtSpace West to ‘experience the new,’ which is the theme of the cultural events series for ASU’s West campus,” said Jeff Kennedy, campus artistic director.

Paine’s specialties are digital music and sound and interactive performance. He is particularly fascinated with sound as an object that can be exhibited where the listener can spend time with the sonic artifact so that they feel truly present. This passion has led to several interactive responsive environments where the visitor generates the sonic landscape through their presence and behavior, to fixed media compositions and to several music scores for dance works, generated through real-time video tracking and or bio-sensing of the dancers. His work has been shown throughout Australia, Europe, Japan, the United States, Hong Kong, Korea and New Zealand.

Paine currently is the interim director of the School of Arts, Media + Engineering in the Herberger Institute for Design and the Arts at ASU’s Tempe campus.

The opening night celebration of this new work is at 6 p.m., Feb. 19, in ArtSpace West (room 228 of the University Center Building), the Interdisciplinary Arts and Performance gallery space. The installation will then be available for viewing Mondays through Fridays from noon to 5 p.m. through March 8.

ArtSpace West admission is free. Visitor parking on the West campus, at 4701 W. Thunderbird Road, is $2 per hour. For information, call 602-543-2787, go to http://campus.asu.edu/west/events or visit Facebook at “ASU West Events.”