The Arizona State tennis, softball and soccer teams have been recognized by the NCAA for recording an Academic Progress Rate (APR) in the top 10 percent nationally, the NCAA announced Thursday. The Sun Devil tennis team earned its seventh-straight score of 1000 (or 100 percent), while softball and soccer recorded scores of 997 and 998 respectively.

With seven-straight APR scores of a perfect 1,000, the NCAA has honored the ASU tennis team each year the measurement has been in existence (since 2003-2004).

"These sports that are honored today truly exemplify the essence of a student-athlete at the highest level," said Jean Boyd, associate athletic director for the Office of Student-Athlete Development (OSAD). "These teams and their coaches take pride in performing at the highest level, not only athletically, but also in the classroom."

Jean Boyd selected as the 2012 Lan Hewlett Award
winner, considered the top honor in the profession

Among Pac-12 schools, Arizona State is tied for second with USC and Washington for the most teams in the top 10 percent nationally. Only Stanford ranks higher than the Sun Devils.

"The hard work and dedication of the support staff, coaches and athletes is exemplified by Arizona State's presence in the top-tier, academically, in the Pac-12 Conference," said Steve Patterson, vice president for University Athletics. "These numbers only reiterate our commitment to academic excellence and producing successful graduates of Arizona State University."

Each year the NCAA honors select Division I teams by publicly recognizing their latest multiyear APR. This announcement is part of the overall Division I academic reform effort and is intended to highlight teams who demonstrate a commitment to academic progress and retention of student-athletes by achieving the top APRs within their respective sports. Specifically, these teams posted multiyear APRs in the top 10 percent of all squads in each sport.

"The academic coaches and members of the Office of Student Athlete Development understand the rigors of life as a student-athlete," said Boyd. "Almost every staff member has had collegiate athletic experience. They understand navigating a difficult curriculum while trying to balance athletics and a social life. It lends credibility and validation to the message we are trying to impart."

The APR provides a real-time look at a team's academic success each semester by tracking the academic progress of each student-athlete on scholarship. The APR accounts for eligibility, retention and graduation and provides a measure of each team's academic performance.

Multiyear APRs for all Division I teams, including the teams receiving public recognition, will be announced next week. Last year, Arizona State recorded its highest cumulative APR score since the NCAA started the measurement with 976, 39 points higher than ASU's initial score of 937 in 2003-2004.

Track and Field's Houlihan Named Pac-12 Newcomer of the Year

The freshman swept the Cross Country and Track and Field honor for the first time in Pac-12 history.

Track and Field's Houlihan Named Pac-12 Newcomer of the Year

Arizona State University track and field freshman Shelby Houlihan was named the Pac-12 Newcomer of the Year, as announced by Commissioner Larry Scott on Thursday. 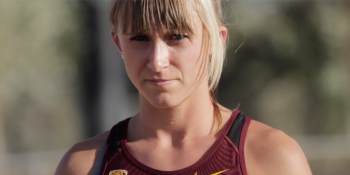 Houlihan sset freshman records for the Sun Devils at 800 and 1,500 meters during the 2012 outdoor season with times of 2:03.85 and 4:22.95, respectively.   Indoors, Houlihan obliterated the school record in the mile with her season’s best of 4:39.56 – nearly five seconds quicker than any other Sun Devil in history.  In addition, she clocked the third-fastest 800-meter indoor time in school history at 2:07.58.

Houlihan’s outdoor time at 800 meters was the eighth-fastest time in the NCAA this season this year and the third-fastest junior time in the country as well.  Houlihan took fourth in the event at the Pac-12 Championships in a race where the top five were separated by less than half a second.  She was favored to advance to the NCAA Championships in Des Moines, Iowa, before an untimely fall at the NCAA West Preliminary knocked her from contention.

For Houlihan, it made it a sweep of the Pac-12 award in the category for the 2011-12 season after she was honored as the conference Cross Country Newcomer of the Year this past Fall.   With this honor, Houlihan became the first student-athlete in Pac-12 history to earn both the cross country and track and field Newcomer of the Year honors since the conference began awarding both in 2000.

Houlihan became the third Sun Devil to be honored as Newcomer of the Year behind Jacquelyn Johnson in 2003 and Charonda Williams in 2008.  That mark ties Arizona State for the highest total of Newcomers of Year in Pac-12 history with UCLA and USC.

Houlihan is slated to compete this weekend at the USATF Junior Outdoor Championships in Bloomington, Ind., in the 800-meter run with the preliminary round taking place on Friday.