Team Note-Taker, on July 13, took the award in the leading category of the Microsoft Imagine Cup World Finals in New York City. 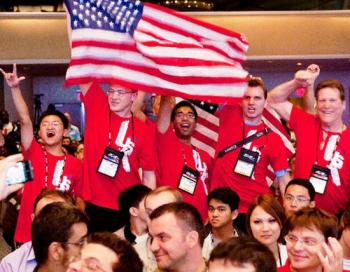 Three students in ASU’s Ira A. Fulton Schools of Engineering – David Hayden, Michael Astrauskas and Shashank Srinivas – along with Qian Yan, an industrial design student in the university's Herberger Institute for Design and the Arts, make up the team.

They developed a portable custom-designed camera connected to a pen-and-multitouch Tablet PC that aids students with visual impairments in classroom note-taking.

Their prototype of the device won out among the technology projects developed by more than 400 students from 70 countries who competed in the Imagine Cup World Finals.

Microsoft, one of the world’s leading computer technology corporations, created the competition nine years ago as a way to highlight and recognize student innovation around the globe, as well as inspire more young students to study science and engineering.

Last year, the Note-Taker device won the first- place prize in the Imagine Cup Worldwide Finals in Poland, competing in a special category that required teams to use Microsoft Windows-based Tablet PCs in projects designed to improve access to education.

For this year’s competition Team Note-Taker competed in the software design category, considered the most demanding Imagine Cup competition category.

Hayden, a graduate student, began work on Note-Taker when his visual disability began hindering his pursuit of undergraduate degrees at ASU in computer science and mathematics.

Legally blind, he found that none of the commercially available assistive technologies allowed him to keep up with the fast-pace of note-taking in his senior-level math classes The Note-Taker allowed him to solve that problem.

The Note-Taker device was developed over the past two and a half years in the Center for Cognitive Ubiquitous Computing – known as CUbiC – in the School of Computing, Informatics, and Decision Systems Engineering, one of the Ira A. Fulton Schools of Engineering.

CUbiC is involved in the design of technologies and devices to assist people with perceptual or cognitive disabilities. ASU students and faculty collaborate on projects in the center’s lab.

The Note-Taker camera is able to tilt up and down, sweep side to side, and zoom in on its target. The Tablet PC provides a split-screen display. One half of the screen has a window that shows live video from the camera, while the other half has a window used for handwriting or typing notes.

This split-screen interface allows students with visual impairment to quickly glance back and forth between the live view of a classroom presentation and their notes, just like their sighted peers. The video window allows the user to aim and zoom the camera by simply dragging, tapping or pinching within the video window.

The team plans to make more advances in the technology and develop a product for commercialization.

The students are working on expanding its capabilities by providing audio and video recording that allows synchronized playback of lectures, along with the corresponding handwritten or typed notes, so students can quickly review lessons after classes.

The improvements will allow the student to select any portion of the handwritten or typed notes previously taken in class, and then see the video that was being recorded while those notes were being taken.

Hayden says his ultimate goal is to see Note-Taker have a positive impact on some of the tens of millions people in the United States whose education is hampered by low visual capabilities – including the roughly 60 percent of working-age adults among those with such visual impairments who are not part of the nation’s work force due to their disabilities.

Overall, more than 325,000 students from more than 100 countries took part in various regional and national stages of the competition leading to the Imagine Cup World Finals. In April, Team Note-Taker took the top prize in the Imagine Cup U.S. Finals at Microsoft headquarters and elsewhere near Seattle.

See video of the Note-Taker device

Seven undergraduate architecture students from The Design School in the Arizona State University Herberger Institute presented their final semester projects to the residents of the San Tan Valley Estates neighborhood in May 2011. The students worked closely with this neighborhood, often referred to as "Little Mexico," to develop plans for a community center and park to be located in three dona...

Seven undergraduate architecture students from The Design School in the Arizona State University Herberger Institute presented their final semester projects to the residents of the San Tan Valley Estates neighborhood in May 2011. The students worked closely with this neighborhood, often referred to as "Little Mexico," to develop plans for a community center and park to be located in three donated parcels. Students presented boards with drawings and images of the proposed design projects in both English and Spanish. Lecturer Milagros Zingoni challenged her students in the studio to serve the public good in underserved communities through education and architecture and to empower these communities through design. 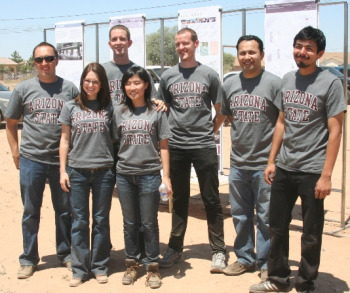