ASU in space: 7 current missions, more in the wings

Arizona State University is no stranger to space exploration missions. Whether to Mars or other solar system targets, its involvement with NASA planetary exploration began in the 1970s and at present, professors and researchers from ASU’s School of Earth and Space have instruments on board or play a significant role with six NASA missions and one European Space Agency (ESA) mission. Others are in the wings.

ASU began exploring space as an outgrowth of research on meteorites and cosmochemistry. Mars became a prime area of research starting with the arrival in 1977 of professor Ronald Greeley from NASA Ames Research Center. He established the Mars Surface Wind Tunnel facility and was on the flight team for Viking, a Mars mission with two landers and two orbiters.

Courses on the geology of the Moon and Mars followed, as Mars-interested researchers joined the faculty, among them Philip Christensen. Computerized image processing for remote sensing began in the early 1980s, making ASU one the first universities strongly involved in the field, which was previously dominated by NASA’s Jet Propulsion Laboratory and the U.S. Geological Survey.

Then two ASU-designed instruments – Christensen’s long-wave infrared Thermal Emission Spectrometer (TES) and a visual camera by former ASU geological sciences professor Michael Malin – were selected by NASA for its Mars Observer missions. Having two instruments from a single university on a major mission was largely unprecedented at the time. When Mars Observer failed upon arrival in 1991, NASA felt both instruments were so important that they were rebuilt and reflown successfully in 1996 on the Mars Global Surveyor mission.

Following up on this success, NASA launched the Mars Odyssey orbiter in 2001 to determine the composition of the planet’s surface, to detect water and shallow layers of ice, and to study the radiation environment. The orbiter holds the record for the longest-operating Mars spacecraft.

For NASA’s twin Mars Exploration Rovers, Spirit and Opportunity, Christensen redesigned his TES infrared spectrometer making it smaller. Each rover was outfitted with one of these “Mini-TES” instruments to aid in the identification of promising rocks and soils for closer examination. Bell is principal investigator of the rovers’ main optical imagers, the Panoramic Cameras (or Pancams) and Greeley served as a member of the rover science flight team.

ASU’s Mars foothold widened in 2003 with the launch of ESA’s Mars Express orbiter, on which Greeley is a co-investigator on the High Resolution Stereo Camera team. ASU’s involvement increased again in 2006 when NASA’s Mars Reconnaissance Orbiter began to search for evidence for persistent water on Mars. Bell serves as a science team member for both color and black and white imaging systems.

A School for Explorers

With Mars and solar system exploration growing, in 2006, ASU’s School of Earth and Space Exploration was born through the interdisciplinary combination of the department of geological sciences with astronomy and astrophysics researchers and students from what had been the department of physics and astronomy. An academic unit of the College of Liberal Arts and Sciences, the school acts as the focus for systems engineering research and education at ASU as it relates to space and Earth science.

“SESE (pronounced see-see) was built to be an internationally recognized center for exploration activities on Earth and in space,” says founding director Kip Hodges. “As part of this mission, we will be at the leading edge of robotic exploration and engaged in efforts to re-energize America’s human exploration efforts. I foresee an increasing role for universities in space exploration, and you can be sure that SESE will be at the front of the pack.”

In Focus: Mercury, the Moon, asteroids

Via the MESSENGER (MErcury Surface, Space ENvironment, GEochemistry, and Ranging) mission, ASU is involved with the small rocky planet of Mercury. After flybys of Earth, Venus and Mercury, MESSENGER started a yearlong study of its target planet in March 2011. Professor Mark Robinson, a member of the camera team, was involved with creating the first global mosaic of the planet.

While many space missions go to Earth’s nearest neighbors, some go farther afield. NASA’s Dawn mission, launched in 2007, carries a suite of instruments to image the surface, measure reflected and emitted radiation, and measure the gravity field of two massive asteroids, Vesta and Ceres. These orbit between Mars and Jupiter.

David Williams, a faculty research associate in the School of Earth and Space Exploration, is a participating scientist on Dawn. Williams, a planetary volcanologist who has worked on NASA’s Magellan and Galileo probes imaging Venus and Jupiter, intends to study the geological history of these asteroids.

Right Around the Corner

If all goes according to plan, the Mini-Cooper-size rover is scheduled to land at Gale Crater on Mars next year in August. Carrying an advanced suite of scientific instruments, Curiosity will explore a gigantic “history book” in the form of sedimentary deposits in Gale, seeking evidence of Mars’ past and present habitability.

ASU professors and researchers from the School of Earth and Space Exploration, as well as graduates, are involved in the mission. Professor Meenakshi Wadhwa is a co-investigator with the Sample Analysis at Mars (SAM) instrument, essentially an analytical chemistry system. Amy McAdam, an alumna, is also working on SAM. Professor Jack Farmer is a science team member for a different instrument, CheMin, designed to examine the chemical and mineralogical properties of rocks and soils. And professor Behar is an investigation scientist for the Russian Dynamic Albedo of Neutrons instrument.

Malin is also the principal investigator for two other MSL cameras, the Mars Descent Imager (MARDI) and Mastcam. And ASU’s professor Bell is an important player regarding the targeting and interpretation of images recovered from all of these camera systems.

Another asteroid mission involving ASU is NASA’s OSIRIS-REx. This mission, scheduled for a 2016 launch, is expected to return the first rock and soil samples from asteroid 1999 RQ36 to Earth in 2023. Christensen designed a mineral scouting instrument for OSIRIS-Rex, dubbed OTES (short for OSIRIS-REx Thermal Emission Spectrometer). This instrument, about the size of a cantaloupe, is a modified version of Christensen’s highly successful Mini-TES instrument carried by both Mars Exploration Rovers.

OTES will be the first major scientific instrument completely designed and built on campus at ASU for a NASA mission. This landmark effort will be enabled by completion next summer of the new Interdisciplinary Science and Technology Building IV, a flagship facility to accommodate a new age of exploration. In addition to researchers and students from across the university, the building will house the headquarters for the School of Earth and Space Exploration and many of its faculty research teams. An exciting aspect of the new building will be interactive displays and a high-definition, 3D-theater on the first floor, designed for exploration by the public. Viewing windows will allow visitors to see into the environmentally controlled laboratory facilities where the OTES instrument is being built.

“In the past,” says Christensen, “instruments we’ve designed for NASA were built at an aerospace company in California. With OTES, for the first time complicated space hardware will be built right here on the ASU campus. This is a major step forward for ASU – I can count on one hand the number of universities that can do this.”

Says the school’s director Hodges, “Even as we celebrate our past accomplishments and current success stories, we are focusing our efforts on designing and preparing for future space missions.”

Fans will be able to watch this weekend's tilt against Oregon at the Harkins Theater at Tempe Marketplace.

The Arizona State University Sun Devil Club will unveil its first-ever Sun Devil Away Game Viewing Party on Saturday, Oct. 15.  For the first time, Sun Devil fans can gather at the Harkins Theatres at the Tempe Marketplace, 2000 E. Rio Salado Parkway, to watch ASU’s conference road tilt against No. 9 University of Oregon in Eugene, Ore.

The viewing party will be the first of its kind at ASU and offers a new experience for fans hoping to gather with other fans to cheer on their Sun Devils from over a thousand miles away. 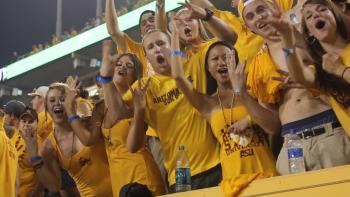 Saturday’s kickoff is set for 7:15 p.m. PST and the doors at the viewing party will open a little over an hour beforehand at 6:00 p.m.  The game will be broadcast in high definition digital projection on one of the theatre’s large screens and the Sun Devil Club hopes to have up to 250 people in attendance.  Admission to the event will be free of charge and will be offered on a first come, first serve basis.  Tickets will be handed out to approximately the first 250 people in line, at which point they will be allowed to enter the theatre.  Admission is not guaranteed once the theatre reaches capacity.

The game will be broadcast live on ESPN and the University of Oregon will also be the host of ESPN’s College Gameday on the same day, as well.  The Sun Devils (5-1, 3-0 Pac-12) currently sit atop the standings in the Pac-12 South Division while the Ducks are undefeated in conference play (2-0) and enter the game on a four game winning streak.  ASU is currently ranked No. 18 in the most recent AP poll and No. 20 in the weekly USA Today/Coaches Poll.

The game will be shown in its entirety, without interruption or reduction of volume for the duration of the broadcast.

No outside food and drink will be permitted into the theatre.  Harkins reserves the right to deny entrance to the event to anyone appearing to be intoxicated or disruptive in a negative way.  Children ages 15 and under must be accompanied by an adult for the duration of the game.