Participants will need to be between 60- and 80-years-old and not have insomnia or other sleep disorders, or sleep problems. This study, supported by the National Institutes of Health, is examining the effects of spending one hour less in bed or following a fixed bedtime and wake time. 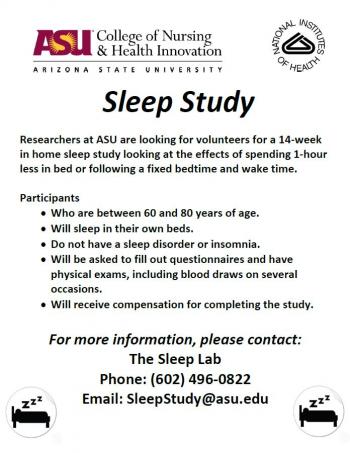 Those who are interested in participating need to complete a 10 to 15 minute phone screen. Those who are eligible will then come into the sleep lab where research staff would go over a consent form and questionnaires. Those who are concluded to be good candidates for the study will be given a device to wear during the night to see whether they have sleep apnea.

Next, candidates will have a physical exam and blood drawn. The final step of the screening process is to spend two weeks following a usual sleep schedule. Those who fit the study's criteria will be randomly assigned to one of two groups. One group will spend one hour less in bed than they normally spend for the remaining 12 weeks of the study. The other group will be asked to maintain a fixed sleep schedule.

Participants will be asked to wear a wrist watch to monitor sleep continuously throughout the 14 weeks and staff will retrieve this information every two weeks. Participants will also be asked to complete a sleep diary every day and a few surveys each week. Also throughout the 12-week study, there will be three brief physical exams, including finger pricks for blood.

Fans of the annual guitar series at the ASU School of Music, take note: The upcoming lineup of performances has been announced for the 2015–2016 season. Running the gamut in style from north Indian classical to flamenco, the five performances in this year’s series will showcase music by an impressive selection of international guitar virtuosos.Johannes Möller – Oct. 8, 2015The European guit...

Fans of the annual guitar series at the ASU School of Music, take note: The upcoming lineup of performances has been announced for the 2015–2016 season. Running the gamut in style from north Indian classical to flamenco, the five performances in this year’s series will showcase music by an impressive selection of international guitar virtuosos.

Johannes Möller – Oct. 8, 2015
The European guitarist and composer Johannes Möller has captivated audiences throughout the world with charismatic performances. In 2010, he was awarded first prize in the GFA Concert Artist Competition, considered by many to be the most prestigious guitar competition in the world. Möller’s ASU program, entitled “Tales of India,” reflects a crossover between Indian and Western classical music. A reflection of Möller’s years of travel in India, his compositions are accompanied by the tabla, an Indian percussion instrument. 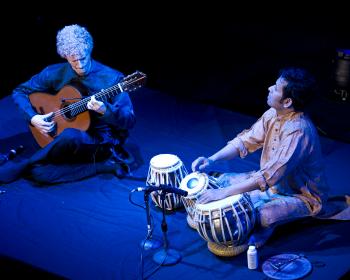 As part of the ASU School of Music's annual guitar series, guitarist and composer Johannes Möller will perform accompanied by the tabla. Photo by Alan Smith. Download Full Image

Thomas Viloteau – Nov. 13, 2015
Thomas Viloteau is considered one of the most gifted classical guitarists of the younger generation, and not without reason. His first concert, in his home country of France, was only a year after he began his studies and in front of an audience of 200 people. Since then, Viloteau has won several prestigious competitions, including the Guitar Foundation of America Competition in 2006 and the Tárrega Competition in Spain in 2012.

Zoran Dukic – Jan. 15, 2016
Zoran Dukic is a distinguished classical guitarist whose concert performances leave long-lasting impressions on both audiences and critics. His carefully balanced programs present a range of music from Bach to Britten, from Sor to Albéniz, from Tárrega to Villa-Lobos and Brouwer. According to El Norte, a newspaper in Monterrey, Mexico, Dukic is “…master of the instrument, shining in virtuoso moments as well as in the intimate ones. The sonority he creates from his guitar is as admirable as his palette of expression and elegance.”

Adam Del Monte – Feb. 12, 2016
One of the leading flamenco and classical guitarist/composers of his generation, Adam Del Monte has made it his life mission to fully express himself in these two genres, transcending labeling and convention. Always having incorporated a wide array of musical styles in his compositions, Del Monte has embarked on a journey of creating a unique sound and language of flamenco that is both steeped in tradition and progressive in its openness to musical flavors from around the world.

Roberto Aussel – April 1, 2016
Roberto Aussel is an extraordinary musician and an exceptional interpreter. Born in 1954 in Argentina, he began playing guitar at the age of seven. After studies with Jorge Martinez Zarate, he won numerous international competitions and prizes. Since the 1980s, his renown as an international concert artist has continued to spread, and he regularly appears in concerts and at festivals in Europe, South America and the United States.

All concerts will be held in Katzin Concert Hall in the School of Music.

Save 25 percent by ordering tickets to three or more events by Sept. 15.