Arizona State University Chief of Police John Pickens is pursuing a new opportunity after 14 years of service. Pickens initially was hired as the director/chief of police for the Department of Public Safety at ASU's Tempe campus, after serving as director of public safety at Northern Illinois University.

“I have given much thought to what I would like to accomplish during the next phase of my life,” Pickens said. “After 14 years of service, it is time to pass the baton to someone else. It has been an honor to serve as the chief of police at ASU.” 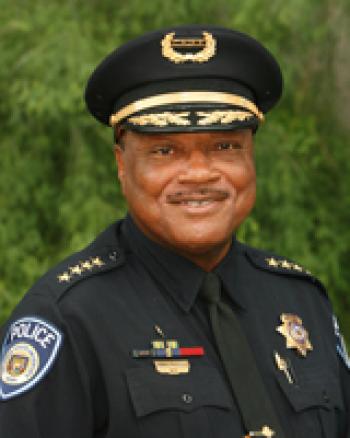 Pickens will continue to serve as ASU police chief while a national search is completed and until his successor is on board, said Morgan R. Olsen, ASU’s executive vice president, treasurer and CFO. He then will assume his new duties as executive director of University Security Initiatives.

Pickens’ duties in this new role will include overseeing expansion of the university’s video security system and other emerging public safety technologies, assisting the Office of Emergency Preparedness in ensuring that ASU is positioned for effective emergency response and recovery, and leading security planning for the Sun Devil Stadium project.

Among the accomplishments achieved during Pickens’ tenure as ASU police chief are the following:

• All marked police vehicles have been equipped with in-car video recording systems and enhanced communications.

• Expansion of the community-based policing program by establishing internal and external partnerships and a team-building philosophy to promote higher levels of service to the university community.

• Establishment of the Chief’s Advisory Board to enhance communication and problem solving within the department.

• Reorganization of the university’s police functions to consolidate the West, Polytechnic and Tempe campus police departments under his leadership, in accordance with the “One University in Many Places” philosophy.

• The 2006 implementation of law enforcement and security services at the newly-formed ASU Downtown Phoenix campus, using a new model designed specifically to meet the unique nature of that campus.

• Expansion of the police aide ranks, which often are used as a recruitment pool for ASU Police officers.

• Aggressive pursuit of grants that allowed upgrading the 9-1-1 system to include police vehicle laptops and implementation of the Live-Scan fingerprint system.

• Development of a new, state-of-the-art police facility on the Tempe campus, including a sophisticated Emergency Operations Center.

• Legislative testimony successfully supporting the university’s ban of firearms on its campuses.

“Chief Pickens’ many contributions during his years of leadership have made the ASU community a safer place to work, study and live,” Olsen said. “I join many in thanking John for his commitment to ASU and the communities in which we are located.”

The School of Music at ASU's Herberger Institute for Design and the Arts welcomes the Shanghai String Quartet as Visiting Quartet in Residence for 2014-2015.

The School of Music at ASU's Herberger Institute for Design and the Arts welcomes the Shanghai String Quartet as Visiting Quartet in Residence for 2014-2015.

This will be the 10th anniversary of the Visiting Quartet Residency Program at ASU, an innovative program that integrates distinguished visiting artists with a comprehensive chamber music curriculum, creating one of the leading chamber music programs in the country. 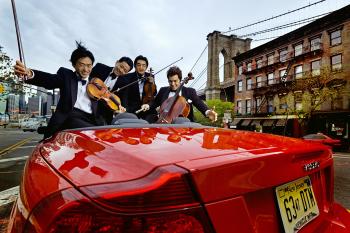 "What makes our program unique is that we bring in a different professional string quartet each year and structure the chamber music curriculum around that particular quartet's strengths and interests," said Jonathan Swartz, artistic director of the Visiting Quartet Residency Program.

During visits to the university, the quartet works intensively with students on themed projects while presenting a series of demonstrations and lectures, performances, open rehearsals and master classes.

"The visits are incredibly intense, creating an environment of immersion with the highest level of artistry in the field," Swartz said. "Our students also benefit from the relationships they develop with the visiting quartet throughout the year."

Renowned for its passionate musicality and impressive technique, the Shanghai String Quartet has become one of the world's foremost chamber ensembles. Its elegant style melds the delicacy of Eastern music with the emotional breadth of Western repertoire, allowing it to traverse musical genres from masterpieces of Western music to cutting-edge contemporary works.

As part of the residency, the Shanghai String Quartet will be featured in three concerts at Katzin Concert Hall:

From now until Sep. 15, a package discount for all three concerts of 25 percent off ticket prices is available in a limited release. Single concert tickets are available beginning in August 2014 at $23 for adults and $8 for students. Visit asuevents.asu.edu/shanghai-string-quartet or contact the box office at 480-965-6447 for more information.