ASU Mars camera to get new views of Red Planet

For the first time since the Viking Mars mission of the 1970s, which ended more than a generation ago, scientists will soon begin systematic observations of Mars from orbit at times of day around local sunrise and sunset. The instrument they will use is the Thermal Emission Imaging System (THEMIS) camera, designed at Arizona State University.

The new approach is a result of NASA changing the orbit of its Mars Odyssey spacecraft, which carries the THEMIS camera. The spacecraft has been drifting toward the new orbit for more than a year, and a small engine burn on Feb. 11 accelerated the drift so it can finalize the orbit in November of 2015. During the transition, THEMIS will continue observations as the orbital time of day changes. 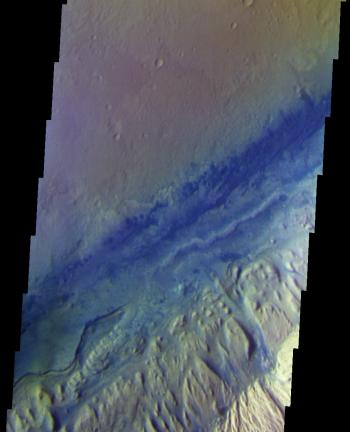 "We don't know exactly what we'll find when we get to an orbit where we see Mars just after sunrise," says Philip Christensen, designer and principal investigator for THEMIS. He is a Regents' Professor of Geological Sciences in ASU's School of Earth and Space Exploration on the Tempe campus. Christensen developed the post-orbit change observing plan.

THEMIS is a multi-band camera that images Mars in nine infrared (heat-sensitive) "colors" and five visible ones. It was launched on Mars Odyssey in April 2001 and reached the Red Planet in October that year. The spacecraft spent several months dipping into the Martian atmosphere to regularize its orbit, and THEMIS began science imaging in February 2002. With more than 12 years elapsed since arrival, Mars Odyssey is the longest-working Mars spacecraft of any nation.

Morning and evening on Mars

Besides revealing landscapes in sharp relief, thanks to the low sun angle, the new orbital time of day for THEMIS promises to let scientists explore frosts, ground fogs, early morning clouds and hazes, and other transient atmosphere-related features that usually vanish as the Martian day goes on.

"We know that in places, carbon dioxide frost forms overnight," says Christensen. "And then it sublimates immediately after sunrise. What would this process look like in action? How would it behave? We've never observed this kind of phenomenon directly."

He notes that the Martian atmosphere is more variable than scientists have appreciated in the past.

"We can look for seasonal differences," says Christensen. "Are fogs more common in winter or spring? Do they vary from day to day? From one part of the year to another? From year to year? We'll check it out."

In addition, THEMIS will measure surface temperatures at thousands of locations. These observations can yield insight about materials in the ground and about temperature-driven processes. These include warm-season flows of water or brine seen on some slopes, and gas-and-sand geysers fed by spring thawing of carbon dioxide ice near Mars' south pole.

"We're teaching an old spacecraft new tricks," says Odyssey project scientist Jeffrey Plaut at NASA's Jet Propulsion Laboratory in Pasadena, California. "We will be in position to do something that has never been done systematically: to watch how morning fog, clouds and surface frost develop at different times of year."

After Mars Odyssey reaches its intended orbit of 6:45 a.m. and p.m. (local time) in November 2015, mission engineers expect Odyssey will have enough propellant for nine to 10 more years of operation, an important matter for ongoing Mars exploration. Besides conducting its own observations, Odyssey also serves as a crucial communications relay to Earth for the two active rovers, Curiosity and Opportunity, operating on the Martian surface.

"Mars is a dynamic world," says Christensen. "And for a generation, we've not been positioned to explore this part of it so thoroughly."

In the most recent episode of The Alumni Experience, the official podcast of the ASU Alumni Association, managing editor Liz Massey interviews two of this year's honorees: Javier Cárdenas and Roy Curtiss III.

Cárdenas is a 1999 graduate of ASU who is being honored for his contributions to concussion prevention and education among young athletes. Curtiss is the director of the Center for Microbial Genetic Engineering and the Center for Infectious Diseases and Vaccinology at ASU's Biodesign Institute.

The Soundcloud files below are excerpts from interviews with Cárdenas and Curtiss. For the full episode, visit https://alumni.asu.edu/podcasts.