When Arizona State University audiology professor Ingrid McBride first met 7-year-old Emma on a trip to Malawi, the little girl was unable to say her name.

McBride fit Emma with hearing aids and then a student taught her to sign her name in sign language. Emma then went around the room signing and saying her name with very deaf speech. In McBride’s successive trips to Malawi, she has seen Emma’s speech change dramatically. 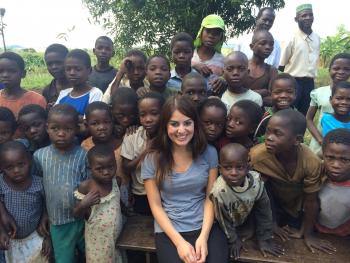 “She says her name and it’s clear,” said McBride. “There is a notable difference between really, really deaf speech and then a little bit [improved speech]. That’s a memorable one.”

Since 2012, McBride, a professor in the Department of Speech and Hearing Science at ASU, and former ASU professor Gail Belus have been taking students on trips to Malawi as part of their Hearing for Humanity program. McBride fell in love with Malawi after going on a similar trip to Africa in 2010.

While in Malawi, the students usually graduate audiology students, perform clinic days where they test hearing and fit hearing aids. They team up with students and audiologists from the African Bible College while in the central city of Lilongwe. Then the Hearing for Humanity team visits different hospitals, clinics and schools throughout the country. Students also get to explore Malawi and its culture. McBride says what makes the program so special is the opportunity students have to become embedded in the culture.

“The students have this wonderful opportunity to really get to know their Malawian counterparts and to share information about their U.S. culture and learn about the Malawian culture from their peers,” she said. “They’re all young people and they’re all students, so they really connect in an amazing way.”

Audiology graduate student Emily Venskytis was drawn to ASU when she learned about Hearing for Humanity.

“I found out about the trip and I thought it was really unique compared to other graduate programs,” she said. “That was actually one of the big factors that made me come to ASU.”

During the 10-12 hour clinic days, students sometimes treated 100 people a day. In 2014 students treated more than 1,000 patients in four weeks. Hearing for Humanity aims to provide the same level of care that they would provide in the United States, whether that means working extra hours or in the dark.

Audiology graduate student Rozela Melgoza enjoyed getting out of her comfort zone and working on patients that presented more challenges.

“I think that the middle ear pathologies that I got to see are beyond what any of the other students that didn’t go got to see,” said Melgoza. “Right now we’re learning about various middle ear infections and pathologies that you would probably never see here, and I think I’ve seen almost all of them. Actually, a lot of our clinical professors haven’t seen them because things just never progress that far here (in the U.S.) because they get treated so soon.”

Melgoza said they fit close to 300 hearing aids over the month but they could not fit a lot of patients because of how bad their infections were. She said she enjoyed fitting hearing aids on children because the hearing aids “will make a big difference in their speech development.”

“You could tell it made a huge influence in their lives,” she said. “It was awesome that we would come to these clinics and people would come see us, and then the next couple days they would bring like four of their family members. There was a lot of word of mouth going on, where they would come and feel like they were treated really well so they would bring their entire family.”

According to Belus, the Hearing for Humanity group has grown every year, and in 2014 they had 13 students accompany the two professors to Malawi. With the students and audiologists from the African Bible College, the group became 30. ASU students worked with the ASU Study Abroad Office and, once they were selected, they went through nine pre-departure training sessions. Belus and McBride wanted their students to understand that this is not a typical study abroad trip.

“It’s not an easy trip by any stretch of the imagination,” said Belus. “So we’re pretty clear that this is a working trip, and we’re not staying in five star hotels. We really want people to make a wise decision that they’re cut out for this.”

How to change a life

In 2014 the first group of undergraduates embarked on the trip. The professors saw an interest from undergraduate students, and four of them went on the trip. Initially, the undergrads would just take histories but over time, the professors were able to train them in some of the audiology basics. Belus and McBride were so impressed that they plan on continuing to take interested undergrads.

Bryanda Silva was a sophomore undergraduate and had never been on a plane until the trip. She was worried about her lack of knowledge and how she would be able to help. Once she got over her initial fears, Silva bonded with the other students and professors and made an impact.

“I met so many wonderful, really educated women, and I feel like those friendships are going to last forever,” she said. “I’ve met wonderful professors who I learned so much from. They’re role models that I can look up to. I learned a lot, and the trip was a motivator to keep doing what I like to do and hopefully progress from there.”

McBride said they saw Silva grow up on the trip and that is just one example of how the program is life changing. Courtney Caron first went on the Hearing for Humanity trip in 2012 and never looked back. Caron deferred her graduation in 2013 in order to go to Malawi again. After that trip, she came to McBride and enlisted her help in getting an audiology job there. She was able to get a job through Sound Seekers, an organization out of the United Kingdom that helps those with hearing loss in Africa. Caron came on the 2014 trip as a professional but stayed in Malawi.

“So when she went with us last year, we knew fully well, as did she, that we were leaving her there,” said McBride. “She’s going to be building a full clinic in the southern part of Malawi, in a city called Blantyre. So it’s just amazing how this totally changed the path of her life. This would never have been a reality otherwise.”

Belus and McBride speak passionately about helping Malawi and implementing audiology there. McBride has even helped the African Bible College figure out curriculum for their audiology program. She has met with university leaders and government officials from Malawi’s Ministry of Education and Ministry of Health. Belus is very excited that two women from Malawi are going to study audiology in the United Kingdom. These women will be the first Malawian audiologists.

“To be just a tiny part of that is pretty exciting,” she said. “That’s the future of the country. When you go to a developing country like Malawi, everything from the roads to the infrastructure, health care, education; everything needs attention. We’re trying to do just hearing, but all of these other things impact what we do. “

The warm heart of Africa

Every trip, Hearing for Humanity gives back to a local village. In 2013 they gave a wood burning stove that the residents can use to bake bread and help raise money to support children orphaned when their parents died of AIDS. Last year they donated two sewing machines to allow women to make a living and support themselves. This year they are raising funds to send all the girls of the village to school. The school fees are only around $35, but oftentimes, if families do not have the money, they will send their sons instead or not be able to send the girls at all.

McBride loves going to Malawi and calls it one of her favorite places in the world.

“I just love it there,” she said. “It’s hard to put it into words, but it’s an alive place. The humanity there is so obvious. Where they may be poor in resources, they are so rich in family and community. In many ways they have so much more than we tend to have here in our culture.”

She and Belus only need three words to describe what they think of the program they created: “It’s life changing.”

Two close friends – undergraduate global health student Eva Jeffers and Allison Weidemann, who graduated last December with a master's in global health – will continue to expand their understanding of the world with Fulbright scholarships.

Always passionate about cross-cultural learning and issues of poverty, recent ASU graduate Allison Weidemann found her way into the field of global health during a life-altering trip to Haiti with a team of medical professionals.

“That experience opened my eyes to the centrality of health to overall well-being and the many factors beyond biology that influence human health,” she said. It also led her to study global health – in which she earned her master’s last December – in the School of Human Evolution and Social Change in the College of Liberal Arts and Sciences. 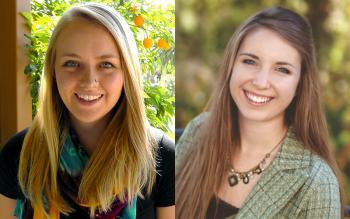 And now she’ll be taking her passion for helping others abroad again, after being awarded a Fulbright scholarship. Also receiving a Fulbright is her friend, ASU undergraduate global health student Eva Jeffers. The two have been close since meeting at ASU in 2011 and call the simultaneous Fulbright experience “really special.”

Fulbright awards provide funding for students to study, conduct research or teach English abroad. The Fulbright program was founded to “increase mutual understanding between the people of the United States and the people of other countries.”

Jeffers will use her scholarship to travel to India as an English teaching assistant. Outside the classroom, she intends to work on a project that examines local news reactions to India’s leadership in public health.

Previously, Jeffers traveled to India for an eight-month study abroad program focused on language and culture. While there, she worked with a local, rural non-governmental organization conducting research on maternal and child access to supplemental nutrition.

Maternal and child health-care access, especially in Southeast Asia, is Jeffers’ primary area of interest. She is also drawn to sustainability, global health policy, urban youth engagement and the spread and development of education and prevention programs surrounding disease.

For three semesters, she has participated in ASU’s Global Classroom, a collaborative research experience with Leuphana University of Lüneburg in Germany. She looked at urban sustainability while designing and conducting an original project on the use of community gardens in forced migrant integration into host countries. She will travel to Germany this summer to present the findings.

Jeffers hopes to use her Fulbright-sponsored year to decide on her career plans. A master’s in public health is in her sights, and she is considering partnering that with medical school.

After graduation, Weidemann became the strategy, collaboration and innovation intern at World Vision International, a Christian humanitarian aid and advocacy organization that works with children and families worldwide. Her role involves researching global trends to anticipate their impacts on the group’s work and prompt strategic action.

Her Fulbright will send her to Turkey for a year to teach English at the university level. During this time, she plans to gain Turkish proficiency while connecting with the local community through music and athletics.

Ultimately, she would like a career in international development with a focus on asset-based health and education programs.