Hiking the Horizontal: Field Notes from a Choreographer

The unique career of choreographer Liz Lerman has taken her from theater stages to shipyards and from synagogues to science labs. In this wide-ranging collection of essays and articles, she reflects on her lifelong exploration of dance as a vehicle for human insight and understanding of the world around us.

Marvin González De León, who received his MFA in dramatic writing from the School of FIlm, Dance and Theatre in ASU’s Herberger Institute for Design and the Arts, was recently awarded a 2018-19 Jerome Fellowship at the Playwrights' Center. Jerome Fellowships are awarded annually to emerging playwrights and come with an $18,000 stipend and $2,000 in play development funds.

González De León is a Reno- and Phoenix-based playwright, and the school premiered his play “Haboob” in 2017. He has worked with Good Luck, Macbeth Theatre. Co., Reno Little Theater and Teatro Bravo. He was a national finalist for the Kennedy Center American College Theatre Festival's 10-minute play category, as well as their National Partners of the American Theatre Playwriting Award. He was a finalist for Latinx Theatre Commons’ Carnaval of New Latinx Work, and twice participated in Theater Masters National MFA Playwrights Festival. Two of his short plays are published through Samuel French. 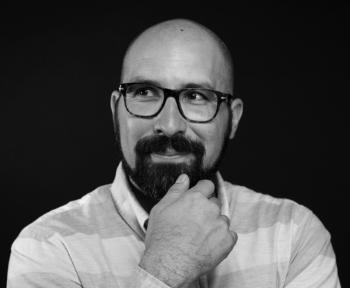 Fellows spend a year in residency in the Twin Cities, Minnesota, working with the Playwrights’ Center artistic staff.

Herberger Institute for Design and the Arts School of Film, Dance and Theatre

Innovation at Arizona State University often comes in the form of research, business ideas and technology. In the case of ASU alumna Amanda Prahl, however, innovation came in the form of literature, theater and music, demonstrated by her original musical, “Til Death.”

Prahl graduated from ASU in 2015 with Bachelor of Arts degrees in political science and English literature from the College of Liberal Arts and Sciences. Immediately after graduating, she entered the MFA program in the theater departmentPart of the School of Film, Dance and Theatre in the Herberger Institute for Design and the Arts., where she earned her master’s degree in dramatic writing in 2018. 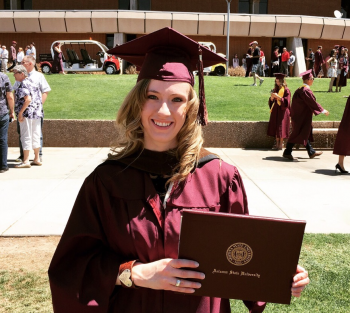 Amanda Prahl graduated with two Bachelor of Arts degrees in political science and English literature from the College of Liberal Arts and Sciences and earned her master's degree in dramatic writing from the Herberger Institute for Design and the Arts. Download Full Image

Prahl began her undergraduate career on the pre-law track, intending to enter intellectual-property law to protect writers and creative works. However, she had her own passion for creative writing she could no longer ignore.

“I had always loved to write. Literally, all my life, I was writing stories, going to the theater and reading voraciously,” Prahl said. “But I had some very well-intentioned teachers who suggested that I couldn't really make a living as a writer, or that I'd be ‘wasting’ myself. The summer before my junior year, I realized that I still wanted to write, not just protect writers.”

This revelation led Prahl to add a degree in English literature, and from there, there was no turning back. Prahl combined her love for writing and theater to write an original musical that she used for her honors thesis and application to the MFA program for dramatic writing.

“I've never been one to fit into tidy boxes or definitions. So much of my college career has been about crossing disciplines and breaking new ground,” Prahl said.

As a graduate student in the School of Film, Dance, and Theater, who received support from the Lyric Opera Theatre, Prahl bridged the gap between theater and music at ASU.

“I was uniquely situated to create this multi-department collaboration and push forward into new territory. I hope this collaboration will last long after I've left ASU,” Prahl said.

The original musical, “Til Death,” debuted as part of the New Works series at the Kerr Cultural Center in March. Prahl says she worked on the production for years and was able to work with a fantastic cast and production team.

“Being able to share [the production] with family, friends and colleagues who had supported me along the way was just extraordinary. It meant so much to be able to see this vision come to life,” Prahl saud. “I have such a strong belief in the power of the arts, and of theater in particular. Stories are how we connect with each other, with the past and with the world around us. Getting to be a part of that is honestly a dream come true.”

Prahl says that attempting to create an original musical was her biggest challenge while attending ASU, but she was able to overcome it with help from those who believed in her.

“It's always a challenge to do something new, but the key to overcoming them, in my experience, is to find amazing people to meet that challenge with you,” Prahl said. “My own determination and hard work were important, of course, but it wouldn't have been possible without finding other people who believed it was possible too. Community changes everything!”

Prahl’s ability to cross disciplines during her time in the College of Liberal Arts and Sciences allowed her to utilize her diverse knowledge in political science, literature and dramatic writing and forge a new path of innovation at the university and in her work as a graduate student.

“I'm a big believer that a liberal arts education is useful for everyone, regardless of their field. It's where we learn about humankind, what makes us who we are,” Prahl said. “I want to be telling stories that move people, make them think and bring them joy. If I'm doing that, I'll be happy.”

Creativity The College of Liberal Arts and Sciences Herberger Institute for Design and the Arts Department of English School of Politics and Global Studies School of Film, Dance and Theatre Theater Music Arts and Entertainment Innovation Politics English Convocation Alumni

This anthology explores the connections between dance and human rights. Such connections appear most frequently in the context of dance being used as a tool for inciting people to violence, as a means of humiliation and as a means of uniting communities in times of hardship. Dance is often employed as a nationalistic propaganda tool, as a means of healing individuals and groups after traumatic events and as a powerful form of theatrical expression and education by artists/choreographers who have undergone or witnessed gross violations of human rights.

The Y located at 92nd Street and Lexington Avenue in New York City is the largest and oldest continuously operating YM-YWHA in the U.S. Many of the most important figures in modern dance premiered on its stage, but until now no one has thought to ask why this should have been so. As Naomi Jackson shows in "Converging Movements," the Y's particular conception of Jewishness laid the groundwork for the establishment of a center for dance in the 1930s.

The Latino population of the United States is on track to exceed 50 million within the next few years, and will nearly triple in size by the year 2050. As this wave of Latinos/as emerge, acting students, teachers, and coaches need resources to support this population and their stories. "Monologues for Latino/a Actors: A Resource Guide to Contemporary Latino/a Playwrights for Actors and Teachers" is a gateway into a cultural world that has been historically ignored by other resource guides.

Understanding the Business of Entertainment

Understanding the Business of Entertainment: The Legal and Business Essentials All Filmmakers Should Know is a guide to the legal and business aspects of the entertainment industry. The book covers essential topics in a thorough but reader-friendly manner and includes plenty of real-world examples that bring business and legal concepts to life. Topics include:

• copyright
• First Amendment law
• Hollywood’s growth and the current conglomerates that own most of the media
• how studios develop projects, manage production, and engage in marketing and distribution