They can often be seen in the night sky as quick streaks of light. This flashy display signals their vaporization as they speed and heat up in the Earth’s atmosphere. Some people call them shooting stars, but they actually have two other names: meteors and meteorites — all depending on whether enough remains of them reach the ground.Meteors and meteorites are pieces of asteroids. If they burn ...

Researchers in ASU's Ira A. Fulton Schools of Engineering, School of Earth and Space Exploration seek to understand macroscopic characteristics of space rocks that fall to Earth

They can often be seen in the night sky as quick streaks of light. This flashy display signals their vaporization as they speed and heat up in the Earth’s atmosphere. Some people call them shooting stars, but they actually have two other names: meteors and meteorites — all depending on whether enough remains of them reach the ground.

Meteors and meteorites are pieces of asteroids. If they burn up completely on entry into Earth’s atmosphere, they’re called meteors. If they fall to the ground, they’re known as meteorites. 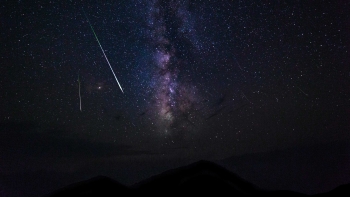 Clay-rich carbonaceous chondrite meteorites often fall from space, but their physical properties — such as friability, porosity and elasticity — are not widely studied because of the destructive nature of testing methods. But these meteorites will soon be given a close examination in a three-year, NASA-funded collaborative study by Arizona State University researchers. Photo courtesy Austin Human/Unsplash Download Full Image

Over the past several decades, a growing number of meteorites have accumulated on the Earth’s surface, making them a focus for researchers around the world, including at Arizona State University. Even researchers without a traditional background in meteoritics or geochemistry are interested in studying them.

“I have no problem admitting that I knew absolutely nothing about meteorites,” says Christian Hoover, an assistant professor of civil engineering in the School of Sustainable Engineering and the Built Environment, part of the Ira A. Fulton Schools of Engineering at ASU. “I knew that I worked on cement and on gas shales. They’re both comprised of many smaller material ingredients that spread across different length scales, just like I’ve since learned meteorites to be.” 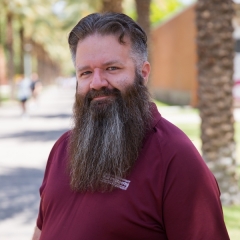 Hoover’s research is focused on small-scale mechanics. He views materials at microscopic levels to learn more about their characteristics and answer questions such as why a material may behave a certain way when it is alone and acts in other ways when mixed with other materials.

Hoover says he was intrigued by the idea of applying his knowledge to a new area of study — in this case, the study of meteorites. That curiosity set the stage for him to be the lead investigator in a three-year collaboration with Laurence Garvie, a research professor in ASU’s Buseck Center for Meteorite Studies, or BCMS; Erik Asphaug, a professor in the Lunar and Planetary Laboratory at the University of Arizona; and Desiree Cotto-Figueroa, an associate professor in the Department of Physics and Electronics at the University of Puerto Rico at Humacao.

The funding for the project comes from NASA’s Yearly Opportunities for Research in Planetary Defense, more commonly referred to as YORPD.

“Many of the meteorites that we’re looking at for this project have many things inside of them,” Hoover says. “They contain crystal fragments, carbonaceous materials and minerals. They have all sorts of amazing ingredients and that makes it very difficult to understand how they will behave when they are compressed or deformed, as well as their mechanical properties, unless you have small localized mechanical testing, which is what I do.”

How the meteorite crumbles

Clay-rich carbonaceous chondrite meteorites are fragments of asteroids that survive the fiery passage through the Earth’s atmosphere. Their physical properties are not as widely studied because of the destructive nature of testing done to examine them.

For example, one characteristic known as friability is defined as the tendency of a rock to pulverize under moderate strain. It is a key aspect that can help organizations such as NASA determine what challenges or risks could arise if spacecraft, satellites or other space-bound objects interact with asteroid materials.

There are several ways friability is commonly tested in the lab. One requires preweighed samples to be placed in a drum and rotated a fixed number of times. The calculated percent of mass loss determines the friability.

As a result, the sample is damaged and smaller in size. These damaging techniques have proven to be a limitation for researchers in the past, but in the interest of planetary defense, Hoover and his research team are determined to overcome this drawback. 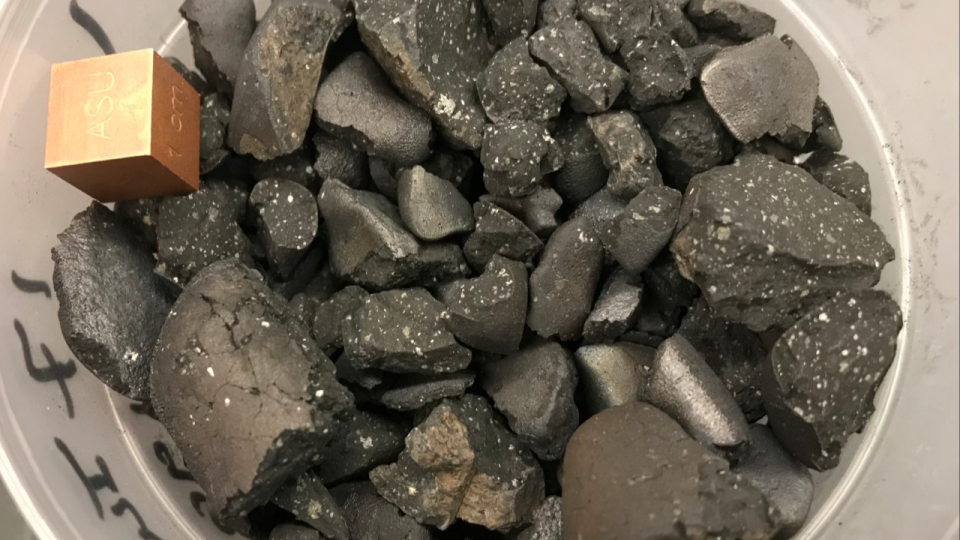 Researchers will be testing clay-rich carbonaceous chondrite meteorite samples that have been acquired by the Buseck Center for Meteorite Studies at ASU. Photo courtesy Laurence Garvie

NASA established the Planetary Defense Coordination Office in 2016. The office focuses on “identifying near-Earth objects and mitigating hazards.” Its most well-known project was the DART Mission, in which researchers purposefully smashed a rocket into an asteroid to determine if it could alter the asteroid’s orbit, a technique known as kinetic impact. Hoover and his co-investigators want to build on that project in their research.

“We’re studying meteorites so that humans can survive the next big asteroid impact from space,” says Garvie, who conducts research in the School of Earth and Space Exploration at ASU. “By determining the physical properties, we can work out a deflection strategy.”

Hoover and Garvie will use long-established ASU resources, including the repository of meteorite samples housed at the BCMS, to achieve this over the course of the three-year project.

In their first year of the project, the team hopes to measure the responses and material properties of these samples ranging from nanometer to centimeter scales and to understand how these materials behave in our planet’s atmosphere.

“This is a set of data that is currently lacking in the scientific literature and handicaps the calibration of accurate multiscale numerical models as well as the development of new theories,” Hoover says. “By the end of our third year, we plan to build and archive a database of experimental data that can be used for meaningful statistical analysis of strength variations at different scales.”

Gathering this information will enable agencies like NASA to understand what forces they need to deploy to redirect or smash an incoming asteroid, even before they become a danger to Earth. 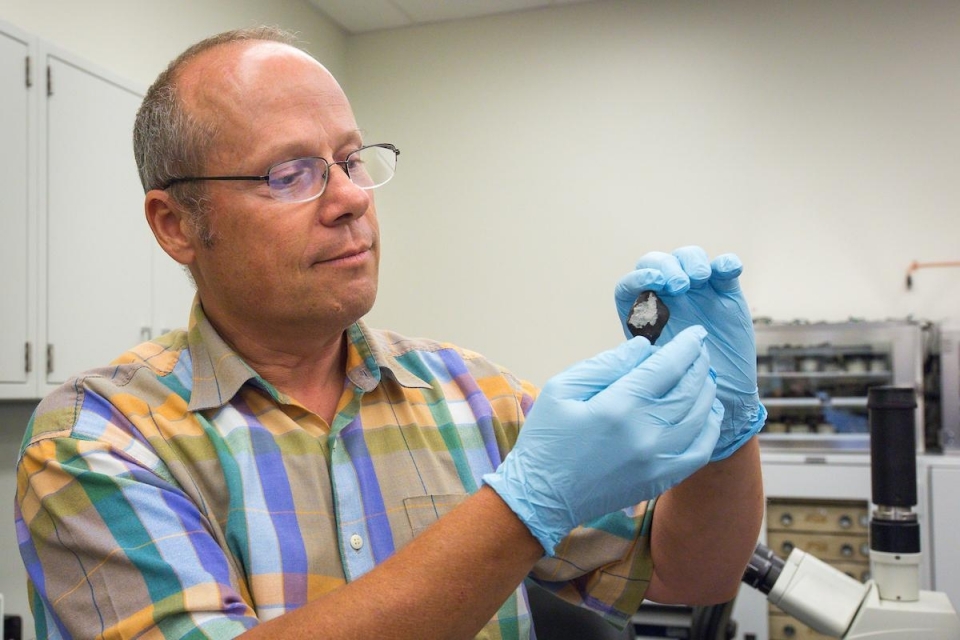 Hoover and Garvie say the project would not be possible without collaboration across ASU, support from NASA and thinking outside the box.

In addition to having a school dedicated to space exploration and research, ASU is home to the Space Technology and Science, or NewSpace, Initiative, one of the strategic initiatives of ASU’s Knowledge Enterprise, which works to foster and establish partnerships between next-generation, nongovernmental space exploration science and technology companies — the NewSpace sector.

“Scott Smas, assistant director of the NewSpace Initiative at ASU, is responsible for bringing Christian and me together,” Garvie says. “He’s the reason why we were able to land a NASA-funded, transdisciplinary, multiuniversity research project.”

Hoover emphasizes the significant contributions to establishing the NewSpace Initiative from Jim Bell, a planetary scientist and professor in ASU’s School of Earth and Space Exploration and now the NewSpace director, as well as strong support from Kyle Squires, dean of the Fulton Schools and ASU vice provost of engineering, computing and technology.

A spirit of curiosity and making connections at ASU, NASA and beyond through opportunities like NewSpace have positioned Hoover to make an impact in this challenging but important field of science.