She submitted her research on JMARS XR to AGU's Student Visualization Research competition and received the grand prize, allowing her to present at the conference. She will give a talk and help the JMARS team host their booth on the exhibit floor with live demos of the project. Last year, there were 26,000 scientists in attendance at the AGU fall meeting. This year, Gold gets to help carry the ASU flag as a winner of this competition and broadcast the potential impact of this technology.

Lauren worked with subject-matter expert collaborators Kathryn Powell and Jonathon Hill to create an immersive experience using real data and real stories. She attributes her ability to meet and work with them to Interplanetary Initiative support.

“Interplanetary has empowered me (an AME student) to collaborate with experts from planetary science disciplines, which in turn increases the impact that our JMARS XR technology could have,” Gold says.

The JMARS XR platform allows multiple researchers, educators and learners to collaboratively configure and view planetary terrain dataset fusions. The project is integrated into VR headsets, AR smartphones and desktop and/or laptop computers so users can explore in whatever form they're most comfortable with. It’s also integrated into Dreamscape in both seated and walkable formats.

The project is the continuation of a rich collaboration between Phil Christensen's JMARS team of the Mars Space Flight Facility at ASU and Meteor Studio. Lauren and her team of undergraduate assistants continue to work extensively with JMARS engineers Scott Dickenshied, Ken Rios, Saadat Anwar and others on software and network integration. In preparation for this AGU submission, she also pursued heavy consultation with planetary scientists Hill and Powell, contextualizing the work in legible terminology for her storyboard. 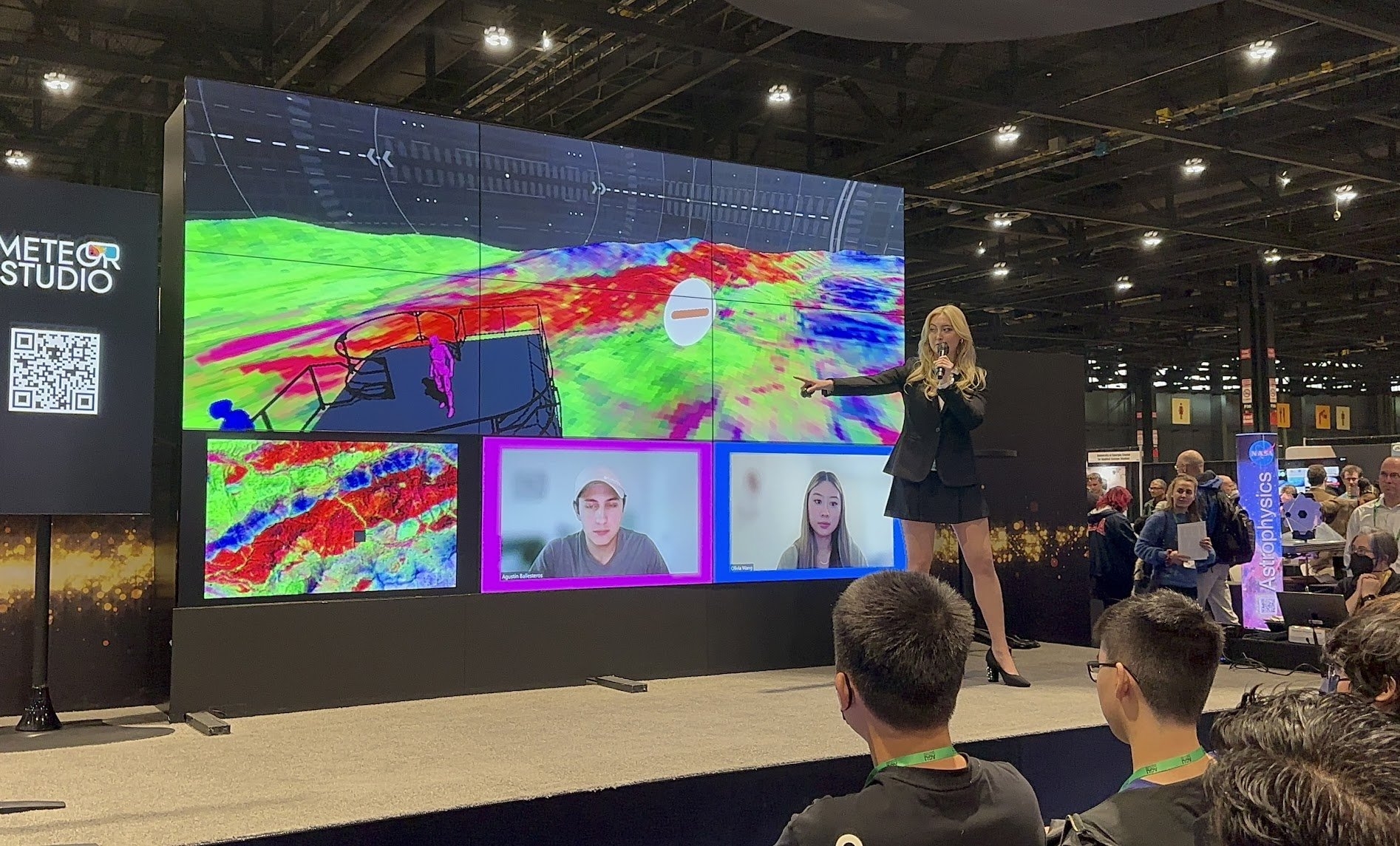 The NCA is the largest national academic organization that focuses on communication. More than 7,000 communication researchers, practitioners, faculty and students are members of the NCA, and more than 4,000 attended the convention. The late ASU Associate Professor Daniel Brouwer, who passed away in May 2021, received the Golden Anniversary Monograph Award, along with Charles E. Morris III of Syracuse University, for the article “Decentering whiteness and AIDS memory: Indigent rhetorical criticism and the dead of Hart Island,” published in the Quarterly Journal of Speech in 2021.

In a letter nominating the two scholars for the award, Assistant Professor E. Cram from the University of Iowa wrote, “This essay is a theoretically sophisticated model for criticism at the intersection of racial rhetorical criticism, public memory and space/place that simultaneously offer important correctives to much of our disciplines’ approach towards the raced and classed politics of AIDS.”

Hugh Downs School Director and Professor Sarah J. Tracy, a friend and associate of Brouwer’s for more than 20 years, reflected on the award and its meaning for the discipline.

“Dan dedicated his scholarly career to marginalized communities, and by doing so, fundamentally transformed the field of rhetorical criticism as we know it. As an intellectual leader in counterpublic theory and public memory, his final essay will have a lasting impact on the field, and his foundational legacy will live on in perpetuity. The field is forever indebted to his innovative ideas and his thoughtful scholarship,” she said.

Associate Professor Sarah Amira de la Garza was awarded the Legacy Award from the Ethnography Division and the Córdova-Puchot Scholar of the Year Award from the Latina/o Communication Studies Division.

In a letter nominating de la Garza for the Córdova-Puchot Scholar of the Year Award, one scholar wrote, “Her teaching is inspirational, innovative and empowering. She has demonstrated her longstanding passion and commitment to mentoring Latinx students and colleagues across the U.S. The high impact of her Latinx postcolonial scholarship and performance-based dissemination efforts cannot go unrecognized. Overall, with her outstanding teaching, mentorship, research and service, she has become a sought-after and well-respected role model for Latinx students and scholars, and she is highly worthy of this award.”

In a nomination letter for the Ethnography Division Legacy Scholar Award, Tracy wrote, “From my years of working with and talking with Amira, I know that she was writing critical ethnography about personal experience and creative writing as cultural ethnographic expression long before it became the dominant form of autoethnography that many practice in communication and other fields. She calls her form of writing 'chicanography,' a term she coined and has been developing as a distinct genre of Chicana critical creative writing.”

Accepting the awards, de la Garza said, “Both of these awards mean an incredible amount to me as they recognize the work that has always been the most meaningful to me during my career. They reinforce my commitment to continue doing what I do no matter where I am. I am grateful to ASU for providing the interdisciplinary community to support my work over three decades."

Assistant Professor Loretta LeMaster was awarded Book of the Year by the GLBTQ Communication Studies Division for "Gender futurity, intersectional autoethnography: Embodied theorizing from the margins," co-authored by Amber Johnson.

That division also awarded LeMaster Monograph of the Year, for "'It’s a ... [inaudible blood-curdling screams, chaos]!’: Gender reveal party fails as ideological rupture" published in Peitho, a peer-reviewed jounral of the Coalition of Feminist Scholars in the History of Rhetoric and Composition.

In response to the awards, LeMaster said, “The Book of the Year and Monograph of the Year awards instantiate the importance of transgender cultural performance and rhetorics to the discipline's future. I am both honored and humbled to win these awards (one of which I share with Dr. Amber Johnson). I am honored to be included among fellow GLBTQ scholars whose award-winning work has helped to shape and enrich the discipline, including developing my own thinking.

"And I am humbled to win these awards in light of the recent Club Q tragedy in Colorado Springs ... in which five people were murdered in a queer club, including two transgender workers. More than recognition, these awards help to normalize trans presence in and beyond the discipline. I dedicate this award to my fellow trans and gender-expansive community.” 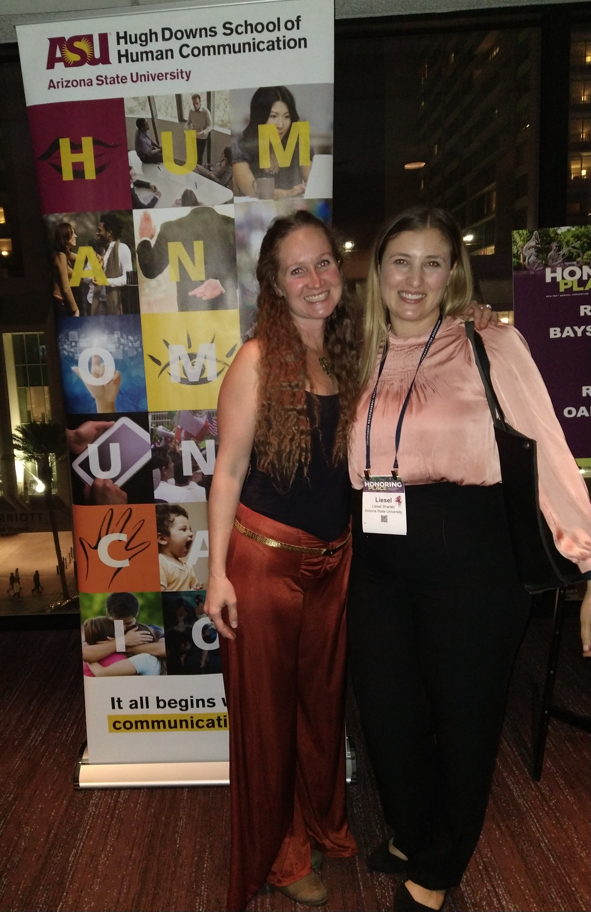 Assistant Professor Jenna N. Hanchey received a New Investigator Award from both the Critical and Cultural Studies Division and the Rhetoric and Theory Communication Division.

She also received an Outstanding Article Award from the Critical and Cultural Studies Division for “African communication studies: a provocation and invitation,” co-authored with Godfried A. Asante.

In her nomination letter for Critical and Cultural Division’s New Investigator Award, one scholar wrote, “I believe that critical future studies will animate the next wave of groundbreaking scholarship in the field, and Hanchey is poised to lead that work through her careful and nuanced attention to the rhetorical dimensions of Africanfuturism.”

In a nomination letter for her New Investigator Award from the Rhetoric and Communication Theory Division, one scholar wrote, “She is a star and I believe she will have a distinguished career. Her early career accomplishments are astounding. I am in awe of how much she has contributed to the field and beyond. She asks big questions and is not afraid to transgress disciplinary or methodological boundaries to find the answers.”

Accepting these awards, Hanchey said, “That I have been honored with these three awards this year is demonstrative of the growing recognition of African communication studies as a subdiscipline, and the community of African scholars being built in the discipline. I'm overwhelmed with gratitude to Godfried Asante, Joëlle M. Cruz, C. Nthemba Mutua-Mambo and Gloria Nziba Pindi for their conversations and collaborations — without their support and feedback, the research honored by these awards would not have been possible.

"I'm so excited that the field of communication studies is starting to recognize and celebrate scholarship that centers on African epistemologies. I'm particularly proud of the Critical and Cultural Studies Division Outstanding Article Award, as it honors the introductory essay to the double issue of Review of Communication that Godfried Asante and I co-edited. I hope these awards bring more attention to African scholars in the discipline and their brilliant work!”

Accepting the award, Sharabi said, “I’m honored to receive this award and grateful to my colleague, Laura Guerrero, for her nomination. It means a lot to have my work recognized by my peers and by the interpersonal communication discipline at large.”

In addition to the faculty awards, several other Hugh Downs School faculty and graduate students were honored at the conference with Top Paper awards: 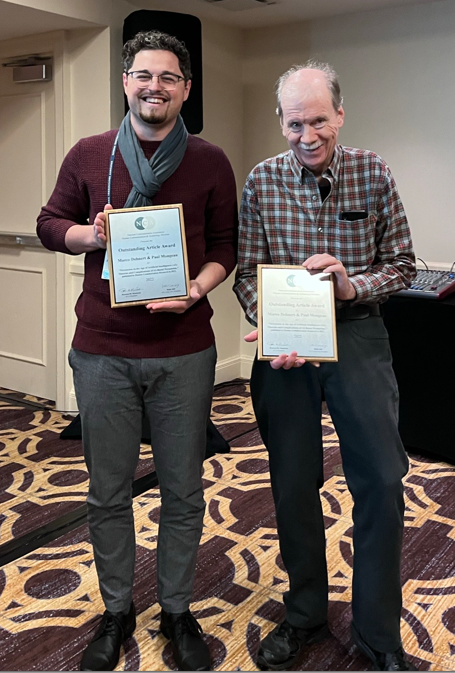 "Persuasion in the Age of Artificial Intelligence (AI): Theories and Complications of AI-based Persuasion" by Paul Mongeau and Marco Dehnart.

Top Paper in Communication and Sport

“Surviving the Temporal Drag of the Classroom: A Collective Autoethnographic Exploration of the Mundane*” by Sarah Keeton and Ashlee Lambert.

“Loss Shapes Itself” by Angela Labador.

See the full list of NCA presentations from the Hugh Downs School.