In the United States, there are over 270,000 cold cases — unsolved criminal cases of homicide or missing persons that remain open pending the discovery of new evidence. Behind each of these cold cases there are thousands of families, friends and loved ones that are left without answers.

This topic and more were discussed last week at the New College of Interdisciplinary Arts and Sciences’ first-ever Cold Case Symposium. At the event, over 300 community members, faculty, experts, students and staff came together, both in-person and virtually, to better understand this crisis, bring awareness to local cold cases and explore some of the work being done to address this growing problem. “This event is the first of its kind where it's bringing together academics, students, family members, advocates and organizations to build a collective community of people that have the same goal and the same interest,” said Krystal Hans, an assistant professor of forensic entomology at Purdue University.

“We are talking about ways that we can build this network, support these cases and aid in these investigations, whether it's from a student that wants to find out how they can get involved, or a community member that wants to hear more about a case and wants to share that in their community. We’re just looking to bring all of these people together to help support cases that are in need.”

Although cold cases are a topic that many are familiar with, one of the goals of the event was to encourage attendees to go beyond entertainment and gain a deeper understanding of the lives that are impacted by cold cases.

The event began with an introduction from the organizers Hans and Lauren Weidner, an assistant professor in the School of Mathematical and Natural Sciences.

In their overview of cold cases, they shared that one of the reasons cases go cold is the lack of resources and a centralized location to access information. In the U.S., only 7% of police departments have a dedicated cold case unit, and only 20% have a protocol for initiating cold case investigations.

“One thing that we see is very striking is that vulnerable communities are impacted the most,” Hans said. “Every case deserves as much attention as the Gabby Petito case received. Daniel Robinson and Lauren Cho should be names that we all know well. It's unfortunate how many cases don't get that kind of attention and community support.”

During the event, attendees first heard from David Robinson II, the father of Daniel Robinson, who went missing in June 2021. Daniel Robinson, a 24-year-old geologist, was last seen leaving his work site in Buckeye, Arizona. In July 2021, his vehicle was found about two and a half miles from the work site in a remote part of the desert. Although his vehicle was recovered, he has still not been found.

David Robinson II, an Army veteran, spoke about how he moved from South Carolina to Arizona to search for his son and has continued his unwavering fight for answers over one year later. He founded the Daniel Robinson Foundation to provide help for families who are experiencing a similar situation.

Kelsi German took the stage next to speak about the murder of her sister, Liberty German and her best friend Abigail Williams. Liberty German and Williams were murdered in February of 2017 in Delphi, Indiana. The crime remains unsolved to this day, despite video evidence found on Liberty German’s cell phone.

Since 2017, Kelsi German has become an advocate for her sister and other family members fighting for answers. She is a recent graduate of Purdue University with degrees in forensic science and psychology. 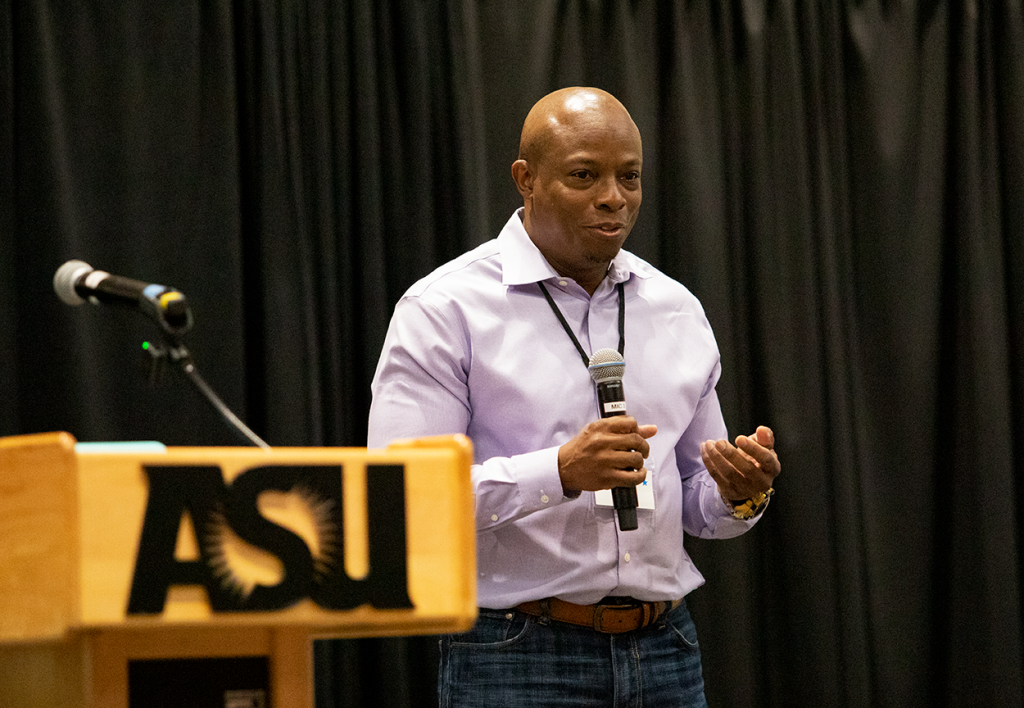 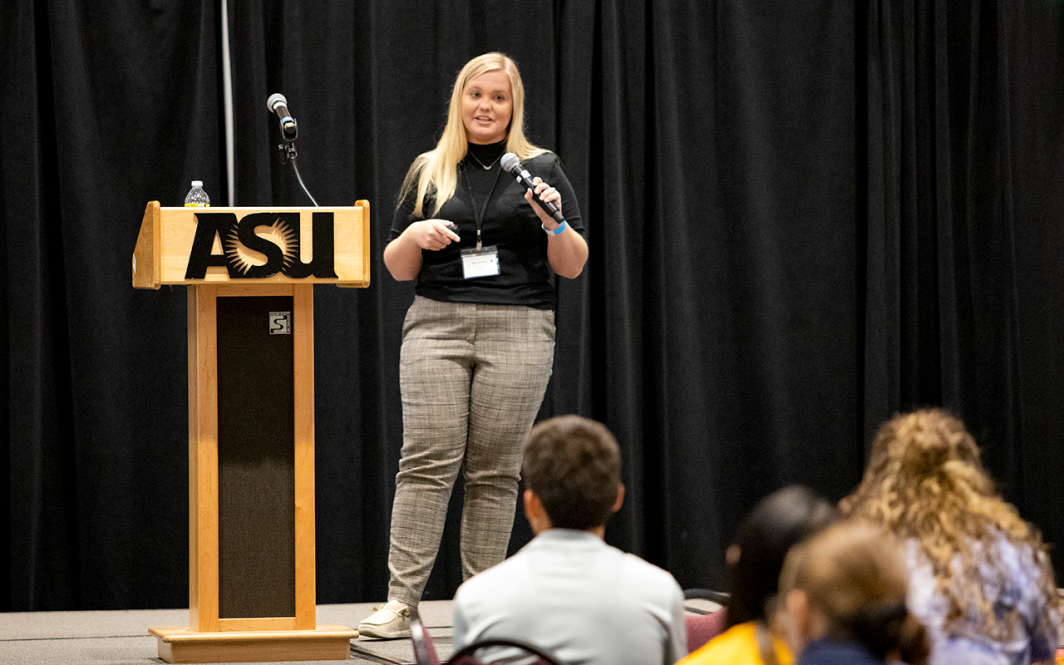 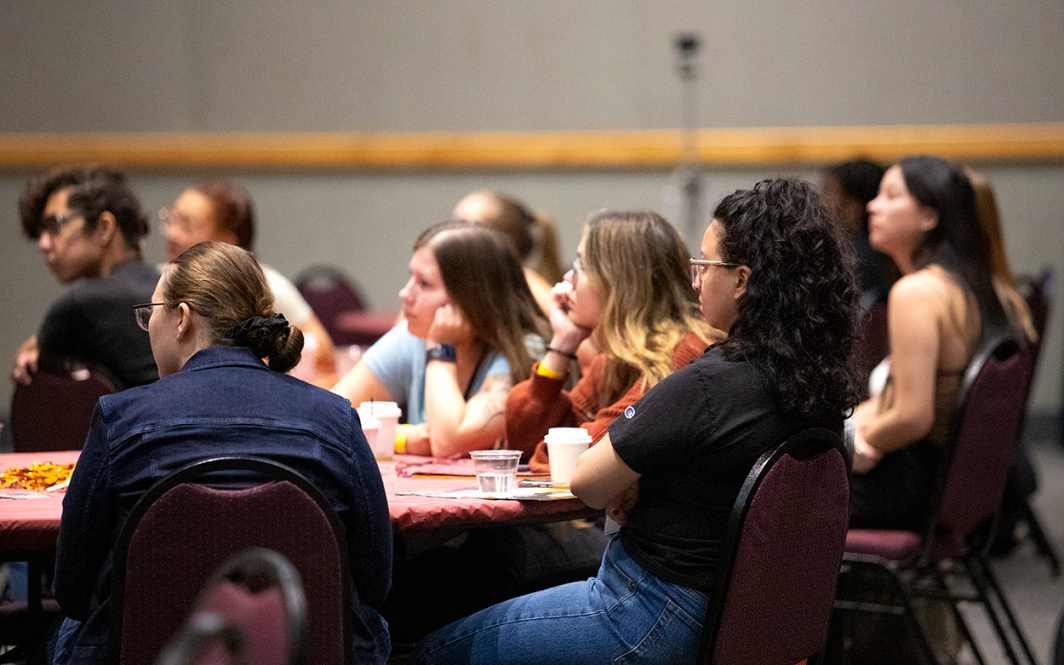 Over 300 community members, faculty, experts, students and staff came together, both in-person and virtually, at the Cold Case Symposium at ASU's West campus on Sept. 23 to better understand this crisis, bring awareness to local cold cases and explore some of the work being done to address this problem. 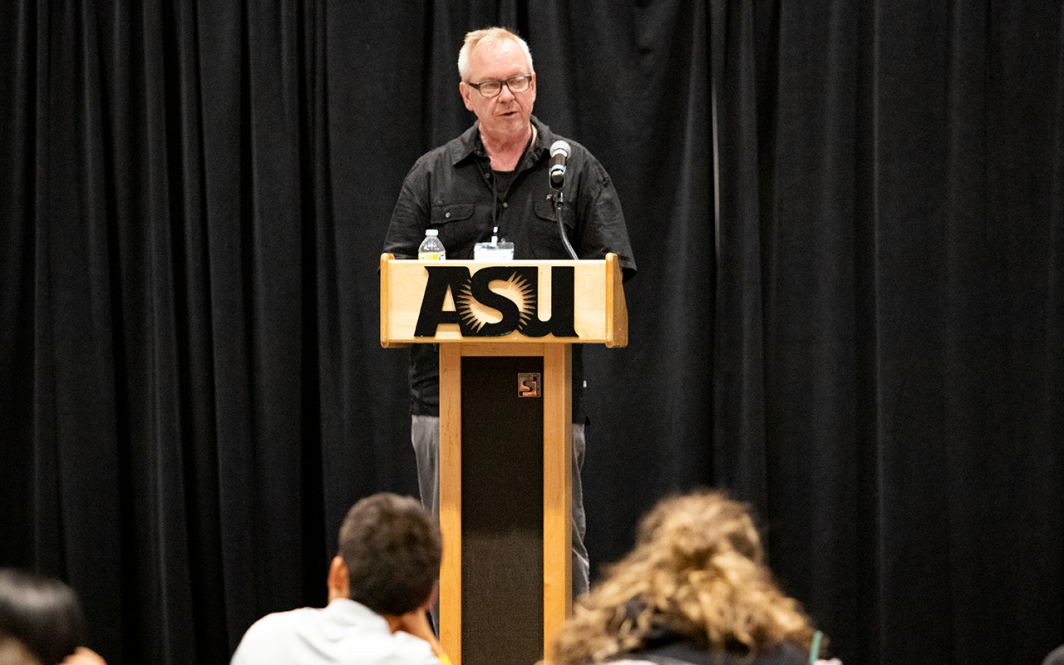 Ethan A. Ristow speaks during the Cold Case Symposium at ASU's West campus on Sept. 23. 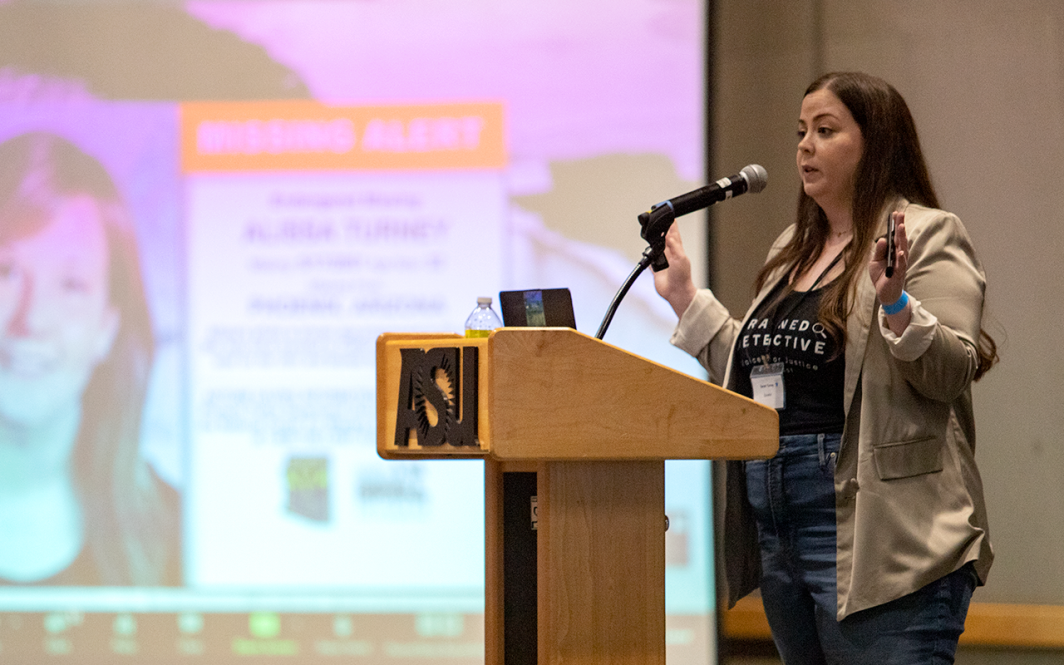 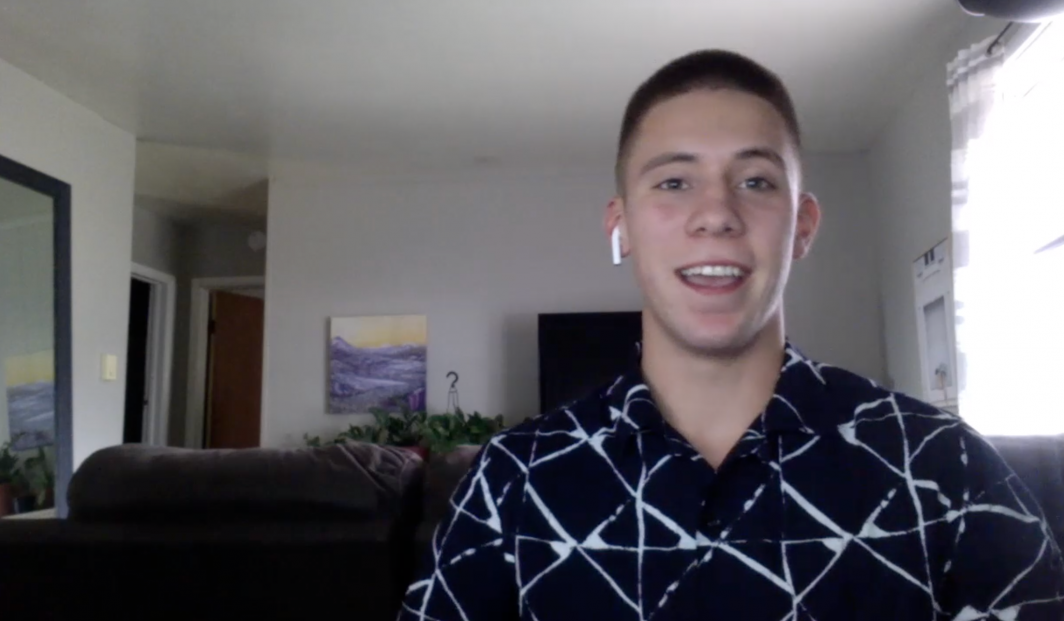 Brayden Johnson, an undergraduate student from Purdue University, shares work he had done on a cold case and what he learned from the experience via Zoom. 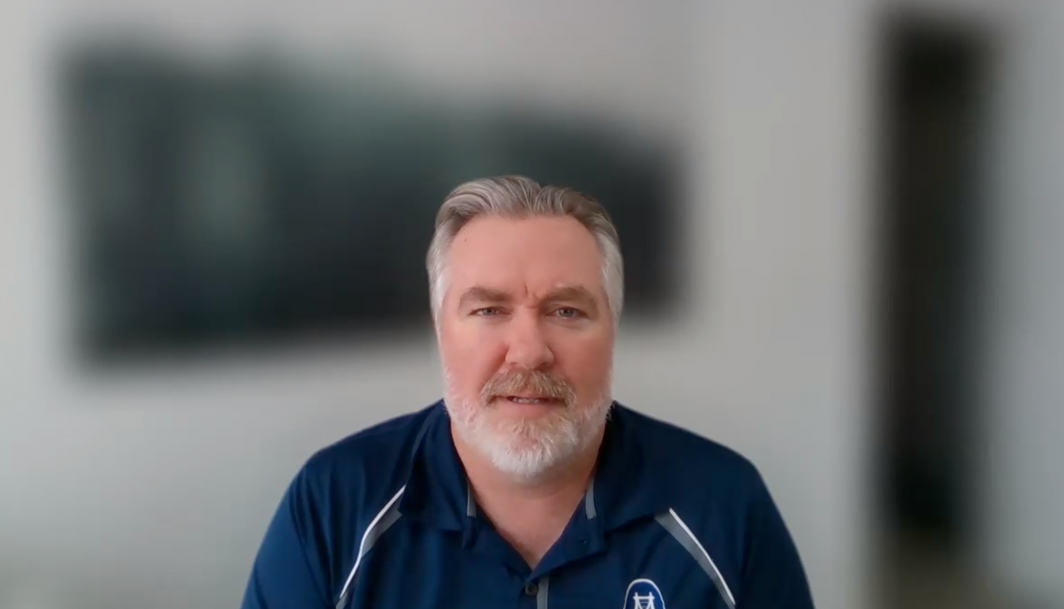 Ryan Backmann, the founder of Project: Cold Case, an organization based out of Jacksonville, Florida, speaks via Zoom about the work he does to provide resources and support for families who have lost loved ones in a cold case. Ethan A. Ristow went on to speak about his son, Ethan B. Ristow, a 38-year-old man who has been missing since August 2021. He was last seen in the desert near the border of Fountain Hills, Arizona. At the time of his disappearance, he was with his wife and two sons and became separated from his family and has not been seen since. Ethan A. Ristow continues his tireless searches for his son, and has started a YouTube channel in an effort to bring greater public awareness.

New College alumna Sarah Turney was the final speaker during the morning session. Sarah is the sister of Alissa Turney, a 17-year-old woman who went missing in May 2001. Sarah, the host of podcasts Voices for Justice and Disappearances, spoke about the power of social media in missing persons cases.

After searching for answers in her sister's case for years, Sarah took to TikTok in the hopes that the case would gain media exposure. Her videos began going viral and with a renewed public interest in Alissa’s case, an arrest was made in August of 2020.

Following the individual speakers, attendees had the opportunity to ask questions during a live Q&A panel discussion.

In addition to hearing directly from families impacted by cold cases, attendees also heard from students and organizations working on cold cases.

Brayden Johnson, an undergraduate student from Purdue University, shared work he had done on a cold case and what he learned from the experience via Zoom. In a course taught by Hans, Johnson researched the cold case of Janet Shirar, the great aunt of his fiancée who was murdered in 1980. Through this experience, Johnson was able to uncover new details in the case

“It wasn't just about finding any information. It was about finding information that had been overlooked or needed a new pair of eyes — something that could push the investigation even an inch toward a solution,” Johnson said.

Moving forward, the event organizers said they plan to hold the Cold Case Symposium annually as part of New College’s commitment to leading the way in the forensic sciences.

“The first Cold Case Symposium hosted here at ASU’s West campus was an incredible experience and I am proud that I was able to host this event with friends and colleagues,” Weidner said. “This event was an opportunity to share knowledge and experience with attendees who had a common goal — supporting these cases and raising awareness. I am looking forward to growing this event and seeing the positive impact that can come from it.”

Sun Devils Drop Opener on the Road at Georgia

Eighteen Sun Devils made their ASU debuts in Friday's season-opening loss to Georgia. ...

Sun Devils Drop Opener on the Road at Georgia Eighteen Sun Devils made their ASU debuts in Friday's season-opening loss to Georgia.