How TEDI-London is redesigning engineering learning

Imagine a new way of teaching engineering that brings in more people — learners who never thought they would have the opportunity to pursue an engineering degree — and that designs learning around hands-on, project-based approaches, around learning by doing. That’s what a new program does, with the help of ASU.

A creative and nontraditional approach to engineering education began in fall 2021 when The Engineering & Design Institute in London, or TEDI-London, launched its project-based degree program in global design engineering. It’s now going strong into its second year.

TEDI-London is an initiative of the PLuS Alliance, a partnership that combines the resources of ASU, King’s College London and UNSW Sydney to solve an array of pressing global challenges.

“One of those challenges is the acute need for more diverse engineering talent in the workforce,” says Ann McKenna, the vice dean of strategic advancement for the Ira A. Fulton Schools of Engineering at ASU. “Addressing that lack of talent requires more than expanding the capacity of current educational systems. It also means tackling a persistent gap in engineering, so we have designed TEDI-London to help expand perceptions of who should be an engineer.” 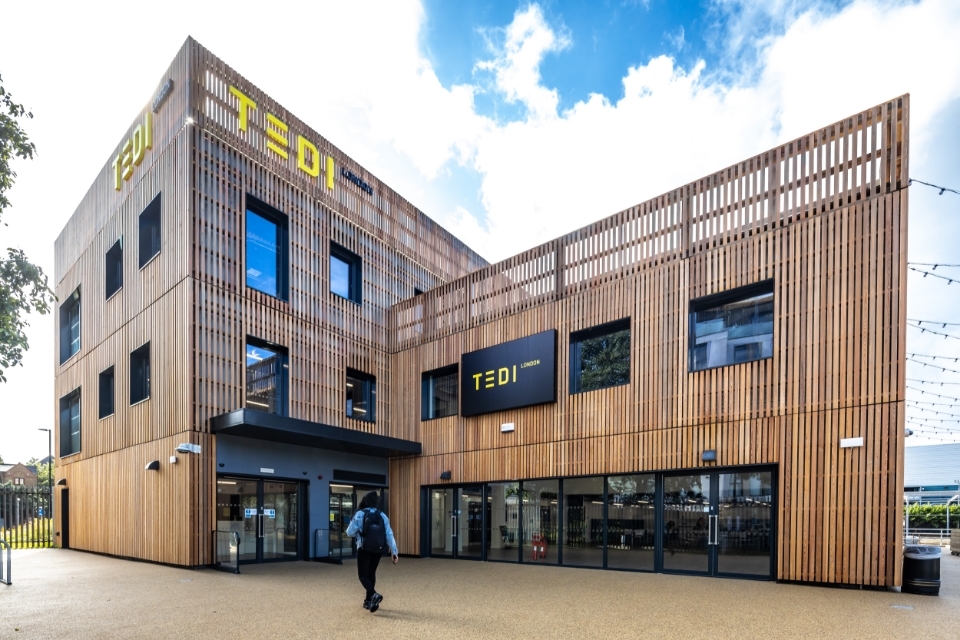 TEDI-London is an initiative of the PLuS Alliance, a partnership that combines the resources of ASU, King’s College London and UNSW Sydney to solve an array of pressing global challenges.

Designing instruction based on learner feedback

TEDI-London’s first cohort of 24 undergraduate students is almost equally male and female, which is a significant contrast with typical engineering programs in which women represent less than a quarter of students. The cohort also includes many students without extensive secondary school math and science credentials.

In the U.K., students often must choose their postsecondary education focus as early as the first or second year of high school — and then prepare extensively for admittance tests called A-Levels. Part of the way TEDI-London has been designed is to help U.K. and international students who didn’t make those early decisions still gain the opportunity to move into an engineering career.

“We conducted focus groups with potential students who are not from traditional STEM backgrounds, and we asked what would excite them about involvement in engineering,” McKenna says.

After those discussions, ASU and TEDI-London developed curriculum that supports real-world impact. “We found that they really want to know they can make a practical difference, meaning that their work will be important to the lives of others. So, the new program is conceptualized around societal impact, as opposed to just developing technology.”

This orientation means TEDI-London’s educational content is organized by functional themes such as smart cities and user-centered design rather than according to disciplinary categories such as chemical or mechanical engineering. Other key elements are meant to develop professional competencies related to social responsibility, commercial acumen and ecological sustainability. 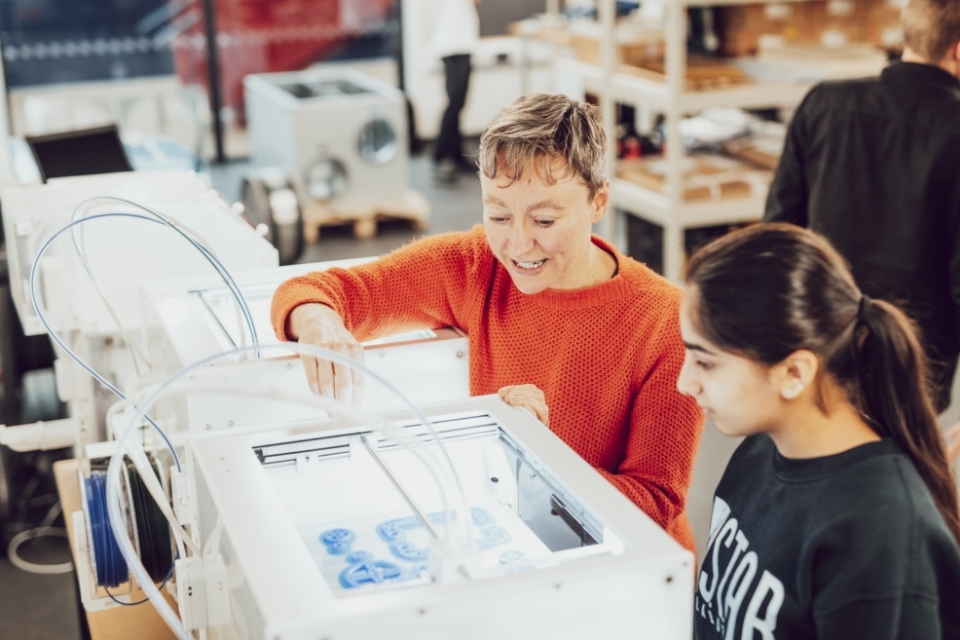 The TEDI-London campus includes makerspaces with 3D printers, along with small and large prototyping equipment.

“We are not discarding math, science and other traditional aspects of engineering. This is an accredited degree program, so it needs to cover those fundamentals,” McKenna says. “However, the student narrative is about broader aptitude, personal attitude and overall ability. TEDI-London’s focus goes to tackling societal challenges such as environmental sustainability and health care provision. These cultural considerations can make engineering education more inviting, more inclusive and better able to generate more globally relevant solutions.”

It’s an innovative approach, and it took significant support from ASU’s Fulton Schools and PLuS Alliance peers in London and Sydney to develop the curriculum.

Testing the operation of the new TEDI-London curriculum involved short-term summer school sessions with students from the three PLuS Alliance institutions in 2019, 2020 and 2021. The initial round revealed how to best structure support for learners within an atypical, globally oriented curriculum. By the final round, students were piloting the actual systems used by the degree program that launched in September 2021.

“If someone just tells you something, you will often forget it the next day. Whereas if they ask a question first, you think about it more,” Colaco says. “Then, if they give you the answer, you’re a lot more likely to memorize it. Project-based learning builds your curiosity — you’re the one trying to get to an answer and come up with the quickest or most creative way to do so.” TEDI-London Dean and CEO Judy Raper (right) works on a hands-on project with a student.

Other students appreciate the collaboration inherent in TEDI-London’s approach. “One of the key benefits is that you are placed with different people with a lot of different skills,” says Zemzem Sonmez, who has a non-engineering background and holds a master’s degree in chemistry. “When tackling a project together you are pulling resources from people with very different talents, and you then gain those skills from working that way.”

This prepares students for tackling today’s complex problems as a team and how many organizations work on tasks in the real world.

McKenna says ASU’s experience with digital content delivery for online engineering degrees represented a key source of assets for the development of the TEDI-London curriculum. Trevor Thornton, a professor of electrical engineering in the Fulton Schools and an early collaborator with TEDI-London leadership, for example, helped to adapt current undergraduate course material from the School of Electrical, Computer and Energy Engineering, part of the Fulton Schools, for different modules.

Fulton Schools faculty members also supported workshops to determine how and when to introduce specific core concepts of engineering science, and how projects should be paced for teams of students to effectively apply their course experience together and progress through the curriculum.

The benefits of this innovative work extend beyond the new institute in the U.K. McKenna says Fulton Schools leaders are evaluating how insights gained from creating TEDI-London can inform development of ASU’s newest engineering school, the School of Manufacturing Systems and Networks, as well as the reimagining of The Polytechnic School.

“Additionally, we now have a model for a fully adaptable and transportable engineering degree program, so we could launch others,” McKenna says. “It’s TEDI-London today, but it may be TEDI in another location tomorrow. There is a lot of opportunity to accelerate ASU’s engineering expertise across multiple global academic partnerships.” "Industry relationships are important from the start. The co-creation of curriculum will enhance graduate employability and can solve problems,” says Judy Raper, dean and CEO, TEDI-London.

5 ways to work effectively as a project team

By Danae Matthews, an engineering student who took part in the Net Carbon by 2050 summer school at TEDI–London. This involved students working together online across four different time zones.

1. Don’t expect group organization to just “happen.” It can be tricky, especially when working across groups. Actively encourage organization and discuss it with your group.

2. Expect conflict in your group. This is something I learned from one of my teammates, Wilson. Conflict is a sign of thinking differently and that is a great tool to harness in teamwork. Be respectful and understanding of your teammates’ different views and turn that conflict into a strength.

3. Communication is key. Especially when you are working online and across time zones, things will change quickly and will likely change as you sleep. Make sure everyone in your group knows what is happening, including yourself.

4. Be confident about your ideas, but don’t get too emotionally attached. Got an idea? Own that idea and sell it. But be prepared for your idea to be changed or not chosen. Don’t be scared to iterate your design and actively collaborate with your group to change it.

5. Be prepared to not always be involved in live discussions. During the online summer school, for instance, and likely in corporations, time zone clashes can mean meetings happen as you sleep. You may not make it to every meeting. That doesn’t mean you can’t express your ideas in the discussion. You can always send your ideas to your group beforehand, but take the decisions they make without you in stride. Trust your group members. You are a team after all.

To get involved and find out more about TEDI-London as an industry partner, visit tedi-london.ac.uk/collaborate/industry.

Story by Gary Werner. Photos by Chris O’Donovan. Top image: By deconstructing and documenting details of existing products, students develop understanding of some of the most fundamental aspects of engineering.

Editor's note: This story originally appeared in the fall 2022 issue of ASU Thrive magazine.If you want to create bigger and better career opportunities, it’s crucial to forge a good working relationship with your boss, especially when you’re starting a new role.So, how do you establish good rapport with your boss while getting up to speed in a new job?A strong working relationship dep... You’ve got a new job; use these 3 savvy tips to succeed

If you want to create bigger and better career opportunities, it’s crucial to forge a good working relationship with your boss, especially when you’re starting a new role.

So, how do you establish good rapport with your boss while getting up to speed in a new job?

A strong working relationship depends upon building trust, and here are three strategies for doing just that:

Make sure you understand the task or project you’ve been asked to do. These questions can help you outline the task:

The answers will give you the awareness to negotiate for more time or resources if you need them, and it will also prevent you from doing too much and wasting time.

Additionally, knowing your project timeline and milestones gives you a helpful framework for updating your boss on what’s going on — which leads to the second trust-building strategy.

Operational transparency is about making your progress, and potentially your process, visible to your boss as you go. This could look like giving progress updates to your boss as you complete each milestone, which will help your boss understand and appreciate the value you’re delivering. It can also help your new boss trust that you’re going to get your job done.

But giving a progress update does not mean sharing all the details. Share the amount that will make your boss feel able to trust you — and no more.

Now, on to the third strategy.

3. Create moments of delight for your new boss.

This is about surprising your boss in a positive way. For maximum effect, use this technique sparingly; if you do it all the time, it will become expected instead of surprising.

One way to do this might be to show extra creativity or finish something way before the deadline. Or you may look to take care of something that your boss doesn’t like to do, so that when they say, “Oh no, now we’ve got to do X,” you can say, “It’s already done!”

Creating moments of delight makes you memorable and showcases your unique abilities. And better yet, it can turn your boss into your raving fan.

Building trust is worth the effort

When it comes to your relationship with your new boss, their trust in you is essential. It’s what can make the difference between stagnating in your career and achieving the success you deserve.

Story by May Busch, the former COO of Morgan Stanley Europe. She’s now an executive coach, speaker, advisor, author and executive-in-residence in ASU’s Office of the President. Go to maybusch.com/asuthrive for more career tips.