For any public research institution, the task of translating its intellectual capacity into something senior leaders and investors can get behind is nothing less than an issue of existential importance.

At Arizona State University, Karen Walker has been doing just that for 15 years. Recently, the assistant director of research development within Knowledge Enterprise was awarded the 2022 National Organization of Research Development Professionals (NORDP) Innovation Award for that work. 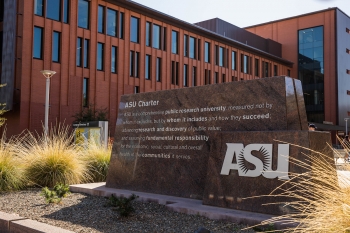 Walker’s innovation is relatively simple: take formal corporate practice and adapt it to the more collaborative and open environment of academia.

“When we tell the story of research development at ASU, it goes something like, ‘We were two girls and a dream,’” said Faye Farmer, executive director of research development in Knowledge Enterprise. “The reality is that we really enjoyed what we did and believed others found it useful. Turns out, we were right. Karen started a movement in academia and now, she’s a sought-after authority for establishing a strategic intelligence function at universities everywhere.”

This past fiscal year, Walker’s staff of three people produced 81 reports and analyses to inform strategic decision-making, in addition to many presentations on competitive programs for federal funding. This year, the team has tracked federal funding using a bi-weekly memo format that is sent to college-level leaders.

As a former team member, Jamie Burns, now employed by an industry group, can attest, “Karen and her team have developed a robust network of clients across ASU’s campus. Under Karen’s leadership, the team has standardized products and processes while remaining nimble enough to innovate and meet stakeholder needs. The team has consistently grown its reach and service to the university, a testament to the quality of the intelligence they provide.”

In 2017, Walker developed several capacity analyses for Vice Provost Elizabeth Wentz. One helped inform a proposal to a local nonprofit, which was awarded approximately $15 million. Similarly, Walker provided unique support for Wentz, including institutional information for ASU’s NSF ADVANCE proposal, which was funded at approximately $3 million in 2018.

“Karen’s analyses were incredibly comprehensive. Taking data and making it into accessible information is critical when walking through a strategic planning exercise. Under her leadership, her team consistently produces high-quality documents that start as a simple question but have significant impact on what we decide to pursue,” Wentz said.

The NORDP Innovation Award recognizes those who have “unique skills or resources to kick-start innovation in research development in ways that generate evidence of promise or demonstrable results.”

Walker’s work has yielded real gains for research development and has forged new connections with institutional peers. For example, she partners regularly with The Ohio State University Strategic Intelligence and Mapping Unit, which focuses on industry research business development.

Walker’s team has attracted new talent to the research development field, and she has consulted with many universities over the past few years that have gone on to establish their own dedicated intelligence units.

In 2018, Walker founded the Competitive Intelligence Working Group (CIWG) as a national resource for those in academia interested in exploring competitive intelligence.

“Knowledge Enterprise has led the national conversation on research in so many ways. Karen’s commitment to the university’s positioning and dedication to surfacing our expertise is unwavering. This award is a wonderful recognition of the value of her work and the impact it has nationally,” said Sally Morton, executive vice president of research in Knowledge Enterprise.

Research Development maintains the website funding.asu.edu. If interested, you can sign up to receive weekly information regarding general federal funding programs and outreach events on the main page.

Alexander Warthen, a senior in Barrett, The Honors College at Arizona State University majoring in medical studies, wanted to do undergraduate research on his way to completing his degree and pursuing a spot in medical school.For eight weeks this summer, as a Helios Scholar at the Translational Genomics Research Institute in Phoenix, he did just that, participating in hands-on biomedical research ...

Alexander Warthen, a senior in Barrett, The Honors College at Arizona State University majoring in medical studies, wanted to do undergraduate research on his way to completing his degree and pursuing a spot in medical school.

For eight weeks this summer, as a Helios Scholar at the Translational Genomics Research Institute in Phoenix, he did just that, participating in hands-on biomedical research that will help him beef up his skills and his resume. 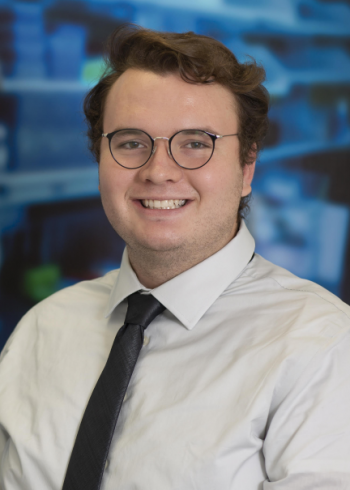 Warthen was part of the 2022 class of Helios Scholars at TGen, a paid internship program with TGen, an Arizona-based, nonprofit medical research institute. TGen is part of the City of Hope, a biomedical, treatment and education center focused on basic and clinical research in cancer, diabetes and other chronic, life-threatening diseases.

The Helios Scholars at TGen program is designed for undergraduate, graduate and medical school students and offers a one-of-a-kind summer experience in biomedical research under the guidance of experienced TGen mentors.

Students in the program work along with faculty and staff on research and administrative projects and attend seminars to develop their professional writing, networking and presentation skills.

Warthen said he was especially interested in being a Helios Scholar in order to gain practical experience and skills to help improve his research capabilities.

“TGen does such a great job at giving its interns real projects that have real-world application and potential clinical trials at the conclusion of the projects,” he said.

Warthen’s internship consisted of learning practical lab skills, including pipetting, passing cell lines and using high tech lab equipment. He learned how to interpret results and created a poster presentation based on his work. He also took workshops and seminars in which he learned more about topics such as public health and honed his presentation skills.

“As an aspiring physician and physician-scientist, I know these skills are critical to a successful career,” he said.

Throughout the internship, Warthen worked on the “G-Protein” project, which he said focused on ways “to identify specific genes that promote synergy with the mutant G-alpha-Q protein through screening methods such as CRISPR or inhibitor libraries to evaluate how that impacts cell proliferation of tumor cells.”

Warthen said he joined Barrett Honors College because he thought an honors experience would get him closer to medical school.

“I knew I wanted to pursue a career in medicine and that I wanted to do research as an undergraduate student,” he said. “Barrett would give me the access to resources and information on how to pursue that.”

He also was attracted to The Human Event, a Barrett Honors College’s signature course for first-year students, as “it would be vastly different from the rest of my course material required by my major and exercise skills I would otherwise lose or never have, such as writing and communication skills,” he said.

Warthen said he used the writing skills he learned from The Human Event to write a personal statement for his Helios Scholar program application.

Warthen plans to complete his bachelor’s degree next spring, and within a year study for the Medical College Admissions Test (MCAT) and apply to medical schools.

Helios Scholars at TGen provides an opportunity for students wanting to gain experience while learning to navigate the world of biomedical research, said Kristen Kaus, manager of education and outreach at TGen.

Since its inception, Helios Scholars at TGen has trained over 650 students, many of whom have gone on to careers in Arizona’s biomedical research, health care and life science sectors. According to the organization, Helios Scholars have been accepted into top-tier graduate and medical schools, won national awards and scholarships, and authored scientific publications.

“We are proud of the success Helios Scholars at TGen has achieved over the past 16 years,” said Paul J. Luna, president and CEO of the Helios Education Foundation. “As a foundation focused on postsecondary success, it is extremely rewarding to see how this partnership has enriched and benefitted so many students, many of whom are first generation and have gone on to make significant contributions in the biomedical sciences.”

The 2022 program concluded July 29 with a daylong scientific symposium where TGen celebrated the Helios Scholars for their achievements and the students competed for awards recognizing project mastery and presentation skills.