Close to half of all marriages in the U.S. end in divorce, affecting over 1 million children each year. These children are at an increased risk of struggling in school, experiencing mental health or substance use problems and engaging in risky sexual behavior.

A new study from the Arizona State University Department of Psychology has shown that an online parenting skills program for divorcing or separating parents reduces interparental conflict, improves quality of parenting and decreases children’s anxiety and depression symptoms. 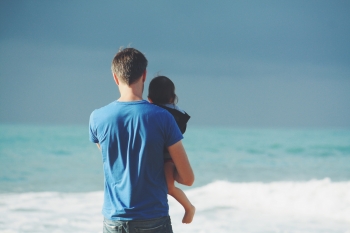 “Most children bounce back after divorce, but anywhere between 25 to 33% of children have significant problems, including academic challenges, mental health problems, risky sexual behavior and substance use,” said Sharlene Wolchik, professor of psychology at ASU and first author on the paper. “We showed that the online eNew Beginnings Program, which is based on 30 years of research into factors that help kids after divorce, benefits these children.”

The researchers, led by Wolchik and Irwin Sandler, a Regents Professor emeritus of psychology at ASU, adapted an in-person parenting skills program to be web-based and asynchronous, which meant parents could complete training sessions whenever they wanted and even on their phones. The effectiveness of the eNew Beginnings Program was tested in a randomized controlled trial that included 131 participants who were randomly given access to the program or assigned to a waitlist. The findings will be published in Family Court Review.

“Many divorcing parents are concerned about their children and might be frightened by the statistics they read that their children are at increased risk for negative outcomes. This study provides the strongest evidence to date of the positive impact of an online program for divorcing and separating parents,” Sandler said. “Family court judges can use it as a tool to protect the well-being of children and to help parents through the process.”

The eNew Beginnings Program consists of 10 sessions that focus on parenting quality and interparental conflict, which directly contribute to mental health problems in children after divorce or separation.

To test how well the program worked, the study used evaluations from both parents enrolled in the course and their children. Parents and children reported that the course improved parenting quality and reduced anxiety and depression symptoms in kids. Both also reported reduced conflict between parents. The size of the reduction in interparental conflict was greater for the online program than the in-person version.

“We were surprised that the effects of the online program were stronger than the in-person program,” Wolchik said. “The eNew Beginnings Program was designed to be highly interactive and engaging in its focus on teaching parents how to identify obstacles to practicing the skills they learn, which is a key part of the program.”

“That completion rate is unusual for programs like this,” Sandler said. “The eNew Beginnings Program was designed to be accessible, and more than half of the participants completed the sessions on their smartphone.”

Wolchik and Sandler have been working for years to expand access to the New Beginnings Program because they know it works. The in-person program is expensive – they estimate it costs approximately $700 per family – and the combination of having to train facilitators with the scheduling constraints of parents who are balancing work and child care likely contributed to the low program completion rate.

“We have been working for a long time to disseminate this program and our frustration with the expense and other hurdles is what led us to turn to the web,” Sandler said. “We are thrilled that the eNew Beginnings Program works just as well.”

Over 80% of the participants said that family courts should recommend divorcing or separating parents complete the eNew Beginnings Program.

This work was funded by the Eunice Kennedy Shriver National Institute of Child Health and Human Development. More information about the eNew Beginnings Program can be found at divorceandparenting.com.

South Asia — the geographic region composed of Bangladesh, Bhutan, India, Maldives, Nepal, Pakistan and Sri Lanka — is home to the largest Muslim population in the world. Though nearly one-third of all Muslims reside in the region, existing scholarship is underdeveloped and often misrepresents and obscures the richness and diversity of Muslim identities and experiences.A forthcoming 15-book s...

South Asia — the geographic region composed of Bangladesh, Bhutan, India, Maldives, Nepal, Pakistan and Sri Lanka — is home to the largest Muslim population in the world. Though nearly one-third of all Muslims reside in the region, existing scholarship is underdeveloped and often misrepresents and obscures the richness and diversity of Muslim identities and experiences. 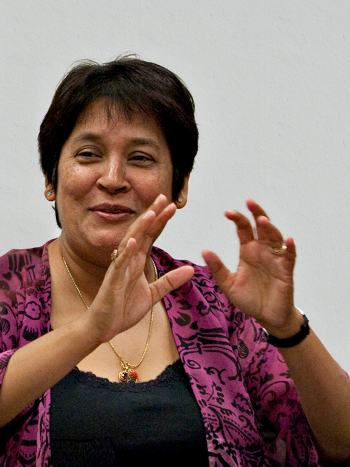 As the newly appointed editor for the "Muslim South Asia" series, Saikia, Hardt-Nickachos Chair in Peace Studies at the Center for the Study of Religion and Conflict and professor of history in the School of Historical, Philosophical and Religious Studies, is uniquely qualified to make a global impact in this role, shaping key questions and setting the pace for new intellectual discovery in the field of South Asian studies. A leading expert on South Asian history, Saikia advances understanding by crossing man-made boundaries of geography and politics to illuminate history by chronicling, curating and correlating the lived experiences of those whom history acts upon.

Saikia credits her work leading the Peace Studies initiative at the Center for the Study of Religion and Conflict for this.

“The center has really, really shaped the way I have now started emphasizing commonalities in human beings, and using that as the lens through which I write history,” Saikia said. “The lived became the focus, because once you talk about the lived of human experiences, of human practices, of human actions, you start seeing the other as not as different from you.”

Saikia’s approach of collaborating with scholars from various fields and integrating humanities disciplines into her research to explore these facets, still rare within the humanities, has helped to expand the field of peace studies. This approach is reflected in her own work, including the award-winning “Women, War, and the Making of Bangladesh,” two edited volumes on peace studies, “Women and Peace in the Islamic World” and “People’s Peace: Prospects for a Human Future,” and a forthcoming edited volume, “On Othering: Processes and Politics of Unpeace.”

She is approaching the "Muslim South Asia" series in a similar way, bringing together an editorial team spanning generations, cultures and disciplinary backgrounds to address a broad range of themes. From religion, community and politics to postcolonial identities and belonging, environment and climate change, and Muslim lived ethics in daily life, the series will promote interdisciplinary knowledge that will enrich the study of Muslim communities, and make that which is currently invisible, visible.

Instead of taking a standard high-level view that emphasizes national or dynastic perspectives or focuses on big actors, "Muslim South Asia" is interested in how normal people experience and participate in history.

“They are the so-called multitude that we don't see. But history works on them,” Saikia said. “If you only pay attention to the watershed moments and lose the story of the process, how you got there, and the people who lived through it, you don't get the intimacy of history. You lose that kind of passion and empathy that we need to feel for one another. Only when we see the lived, then the particular becomes a story of the universal.”

Every story is a human story, and history is not simply a collection of dead narratives, but context for future, Saikia says. '

“You learn something about the past, because you want to shape the future, to make that history speak, for, about people in this kind of empathetic, humanistic way,” she says.

To that end, the timing of the series launch is especially relevant. In 2022, India and Pakistan – the most populous Muslim countries in South Asia – will celebrate 75 years of independence from British colonial rule. Exploring history, people and cultures of the region from a new perspective will help decenter Western stereotypes of “Muslim as threat” and demonstrate a greater interconnectedness.

“It's a global story,” Saikia says, emphasizing the importance of focusing not only on Muslims in South Asia, but also on the contributions and place of South Asian Muslims around the world. “I live in America. There have been a lot of issues with Muslims here politically, but also Muslims have been very much embraced here. That story of America also needs to be told.”

All human beings have the same story to tell, according to her. Though it may happen in different places and times, humans share the same essential desires and experiences: laughter, joy, losses, gains.

“Learning to understand one another is crucial, now more than ever,” Saikia says.

“'Muslim South Asia' is an idea of these commonalities, these connections, these bridges, and how those bridges have been kept, created and maintained by Muslims. And not just Muslims. Every community is actually a preserver of one another in that region. Through their different ways, they have preserved and enriched one another. And this particular story, hopefully, will become the prism through which we see everybody else. The Muslim becomes a prism through which you also embrace the other communities; through which you make connections with the past, the present and, hopefully, it'll show us the ways of the future,” she says.

In addition to her new role as editor of the "Muslim South Asia" series, Saikia has taken a lead role in developing the Center of Muslim Experience in the United States at ASU, which will launch in fall 2022.

“That is the role of a scholar,” Saikia says, “to be a leader in thinking, and thinking beyond a present moment of impasse. To create hope in communities, to produce knowledge that gives a sense of your past in order to go ahead in the future.”

Though she acknowledges it may be an idealistic position, as a historian of peace studies Saikia constantly endeavors to improve the community in which she lives — locally and globally — to have a positive impact and to inspire others to think the same way.

Manager, Marketing and Communications, Center for the Study of Religion and Conflict