This fall, 20 first-generation college students from around the state will attend Arizona State University, courtesy of the Dorrance Foundation for Education.

Created in 1999 by Bennett and Jacquie Dorrance, the Dorrance Scholarship awards students with $100,000 each, over four years, to attend ASU, Northern Arizona University or the University of Arizona. 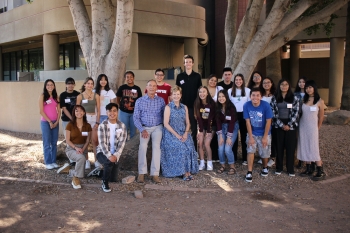 Dorrance Scholars must maintain at least a 3.0 grade-point average, live on campus during their freshman and sophomore years, attend monthly meetings with fellow scholars and perform volunteer service.

Before arriving at ASU this fall, Dorrance Scholars are also invited to participate in a variety of summer programs that include international study and travel, an innovative entrepreneurship experience, and mentoring and tutoring.

“We are thrilled to welcome our largest class of Dorrance Scholars. In 1999, the Dorrance family established the program with a relatively small gift supporting 10 high school graduates,” said James Hensley, executive director of the Dorrance Foundation for Education. “It has been an incredible honor to shepherd the growth of this program, which has awarded over 560 scholarships to date.”

The 20 scholars who will be attending Arizona State University, and the high schools from which they graduated, are as follows:

To learn more about the Dorrance Scholarship Programs, visit www.dorrancescholarship.org.

Although the study of viruses that cause disease in humans has been in the spotlight for the past few years, it is important to better understand how viruses work in other species. In a new study, Arizona State University professors Kevin McGraw and Arvind Varsani investigated the characteristics and infection patterns of a new avian poxvirus in house finches (Haemorhous mexicanus) in Arizona. Thi...

Although the study of viruses that cause disease in humans has been in the spotlight for the past few years, it is important to better understand how viruses work in other species. In a new study, Arizona State University professors Kevin McGraw and Arvind Varsani investigated the characteristics and infection patterns of a new avian poxvirus in house finches (Haemorhous mexicanus) in Arizona.

This is the first time that the full genome of the house finch poxvirus has been sequenced, and their findings have been published in a recent issue of the journal Transboundary and Emerging Diseases. 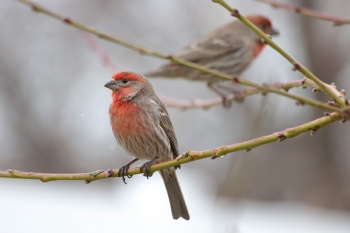 ASU researchers have discovered and sequenced a new poxvirus in house finches. This could give us insight into how viruses work in other species. Photo by Jeremy Stanley/Unsplash

It is known that poxvirus infections in animals, including birds, usually cause skin lesions (like chickenpox in humans). However, how the virus works is still not well understood. This study is one of the few that has investigated the molecular and ecological aspects of poxvirus infection in wild birds.

The study focused on two main areas. First, researchers wanted to understand which characteristics in the birds could predict poxvirus infection. They examined temporal (day of capture) and biological (including sex, initial body condition and age) aspects, as well as the degree of infection with Isospora spp. protozoan coccidian parasites. Interestingly, none of these were predictors of poxvirus infection.

“This is unusual, as we've previously found that variables like age, male plumage coloration and glucose levels link to poxvirus infection in these birds,” McGraw said.

Second, they performed a genetic analysis and phylogenetic comparison (a comparison between genes of poxviruses found in other bird species). DNA was taken from lesions on two male house finches. Using high-throughput sequencing, a precise way to sequence DNA, the viral genome was obtained. It was determined that the sequence was around 354,000 base pairs (A,T,G,C) long. Between the two house finches that were analyzed, there was 99.7% similarity between their genomes, confirming that the same and new finch poxvirus had been sequenced. Lastly, they found that the newly sequenced genome is 82% similar to the canarypox virus genome. Identifying similar poxvirus genes between different bird species is key in understanding their evolution and the relationship between them.

Figuring out how viruses work in an urban house finch population provides invaluable insights on potential viral threats to wild animals in the light of climate change and habitat loss. The full genome sequences obtained from this study are publicly available at the National Center for Biotechnology Information database’s GenBank under the identifying numbers OM869482 and OM869483.

“Sharing sequence data in a timely manner is essential to address epidemiological questions as well as aiding in the rapid development of diagnostics, therapeutics and prophylaxis to pathogens,” Varsani said.

McGraw and Varsani are professors in the School of Life Sciences. Varsani is also an associate professor in the Center for Evolution and Medicine and in the Biodesign Center for Fundamental and Applied Microbiomics. This investigation was done in collaboration with other international ecologists and virologists, including Victor Aguiar de Souza Penha, Dean Drake and Simona Kraberger.