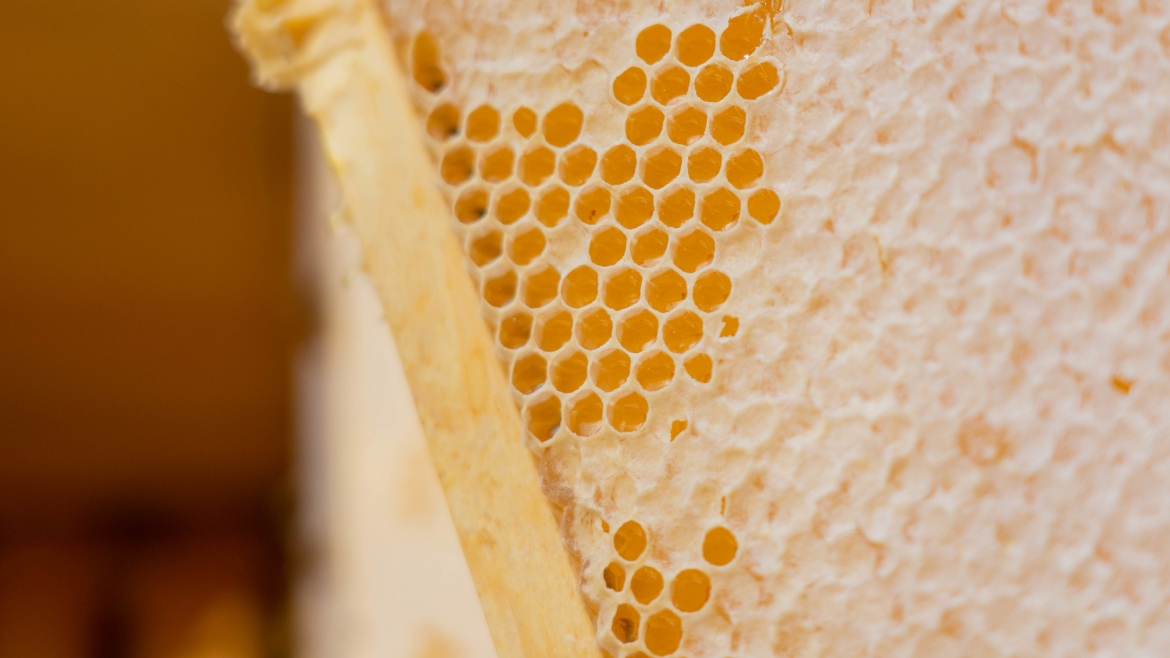 Ozturk, a research technologist and associate researcher at Arizona State University’s Bee Lab Annex, is about to show a few visitors how honey is harvested from the more than 5,000 bees at the lab, located near the ASU Polytechnic campus.

The lab is one of the largest bee laboratories in the United States, where ASU researchers are studying bee immunization, social behavior and evolution, and more. (Students can even take hobby beekeeping courses there.)

The harvesting, which occurs once or twice a year, can produce up to 3,000 pounds of honey, all of which is donated to the Crockett Honey Co. farm in Tempe, which gives ASU a credit to cover expenses.

The harvesting is also done to give the bees enough space to produce brood, which is the eggs, larvae and pupae of honeybees.

Here, we take a look at the process. 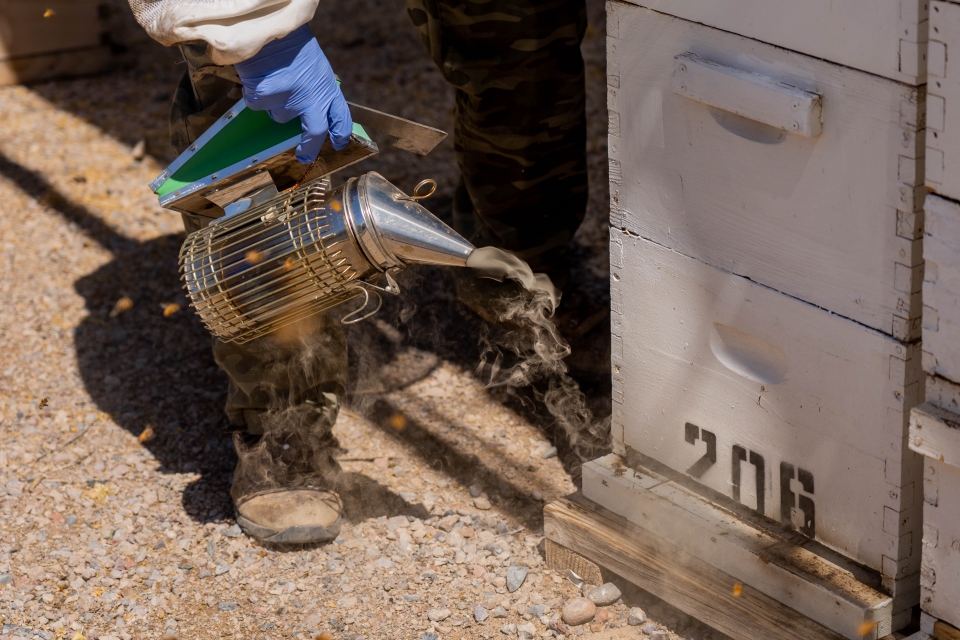 First, Ozturk releases a puff of smoke around the hive entrance to calm the bees. After waiting a minute, he’ll gently open up the hive and deliver another puff of smoke, which is made of wood shavings. 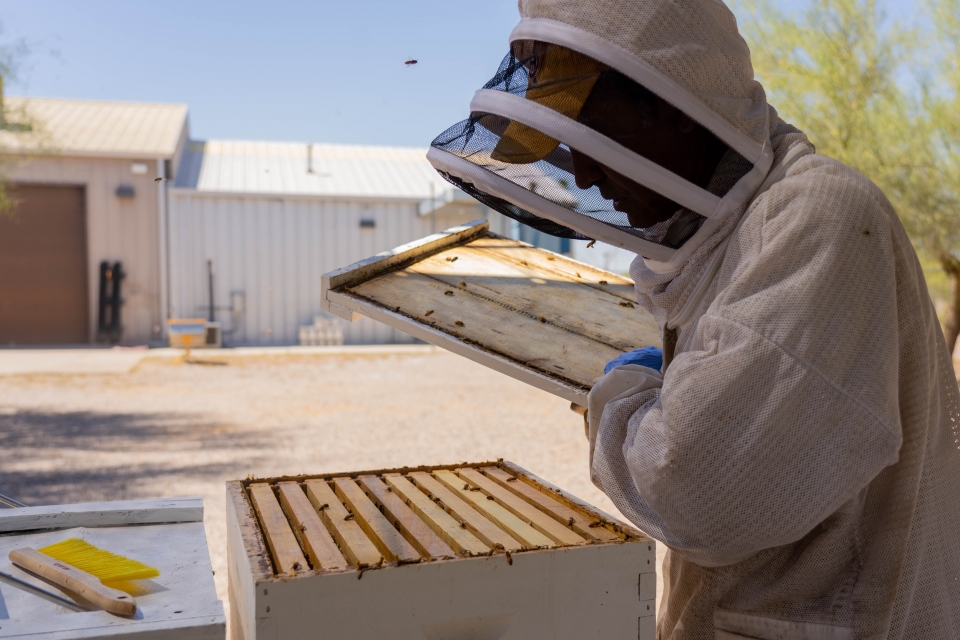 Ozturk examines the 10 wooden frames inside the hive. Because the bees need the honey to survive, he will not harvest one of the frames unless there’s less than 20% moisture measured by a refractometer. But if it’s obvious the frame is, say, 90% capped (capping is the thin layer of wax built over the top of the honey), there is enough honey to be harvested. 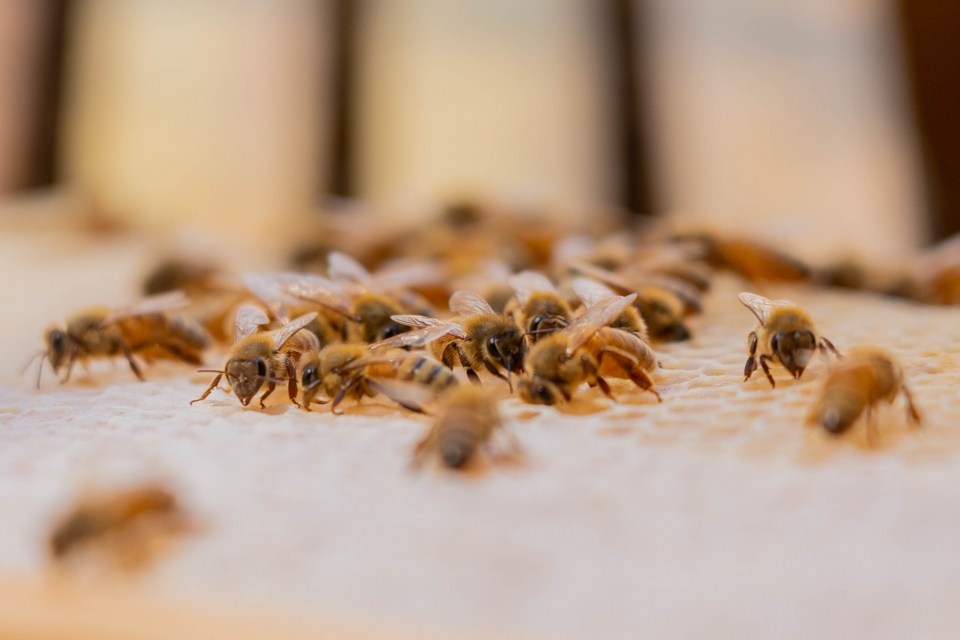 “We make sure we leave some honey for them for winterizing and for their survival,” Ozturk said. “If we think they have more than their need, then we harvest some of the extra honey.” 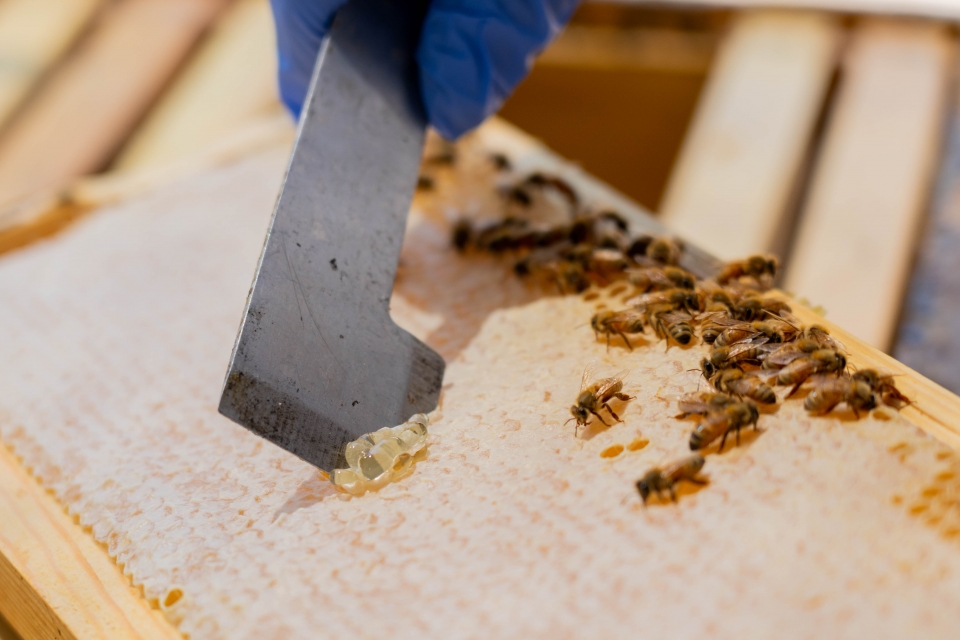 Ozturk uses a metal scraper to strip away the capping from the honey. The European honeybees at the bee lab are bred for gentleness so they don’t fight for their honey like wild bees or other sub-species like Africanized bees.

“They are happy right now because they have plenty of nectar sources available,” Ozturk said. “So they don’t care. They’re telling us we can produce.” 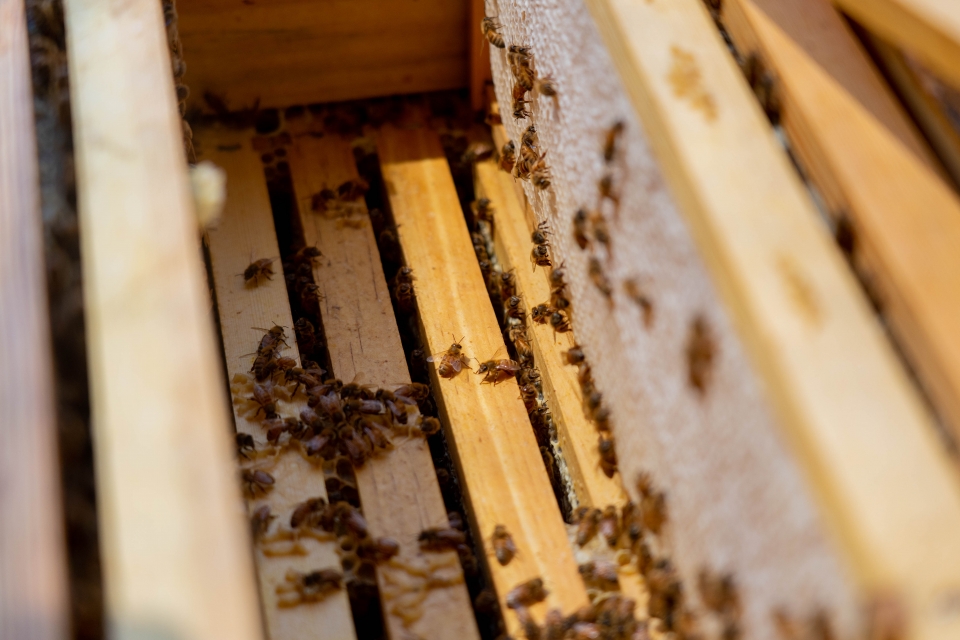 Each colony can produce anywhere from 50 to 100 pounds of honey. It can take a week to 10 days to harvest all the colonies at the bee lab, depending on how much time Ozturk has.

Not all the colonies are harvested, though. Some haven’t produced honey beyond what they need to survive. 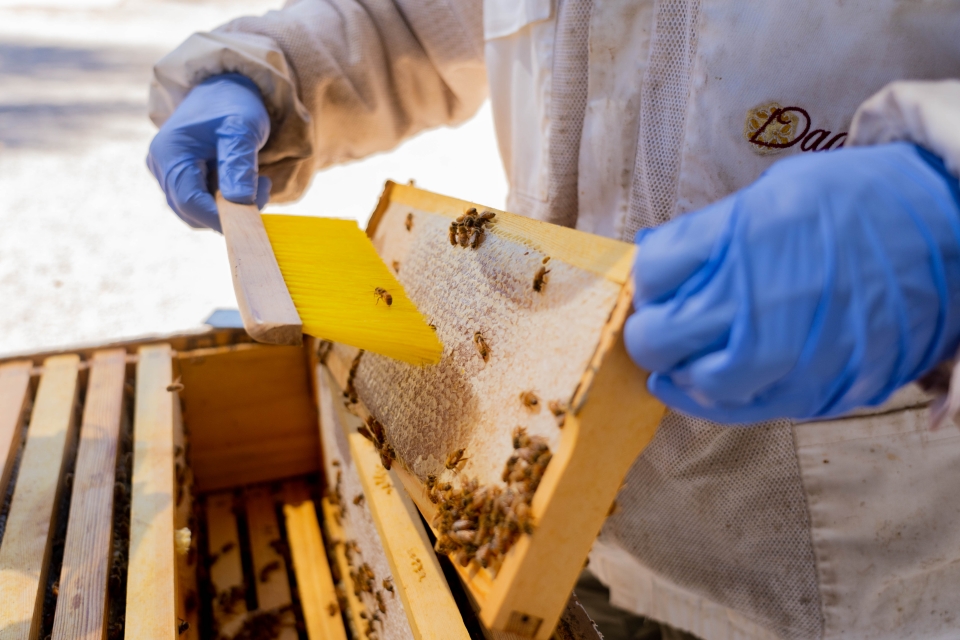 Ozturk will shake each frame in an effort to get rid of the bees. If that doesn’t work – inevitably a few remain – he takes a brush and gently whisks them off. The bees don’t seem to mind, as you can see by the one who has landed on the brush. 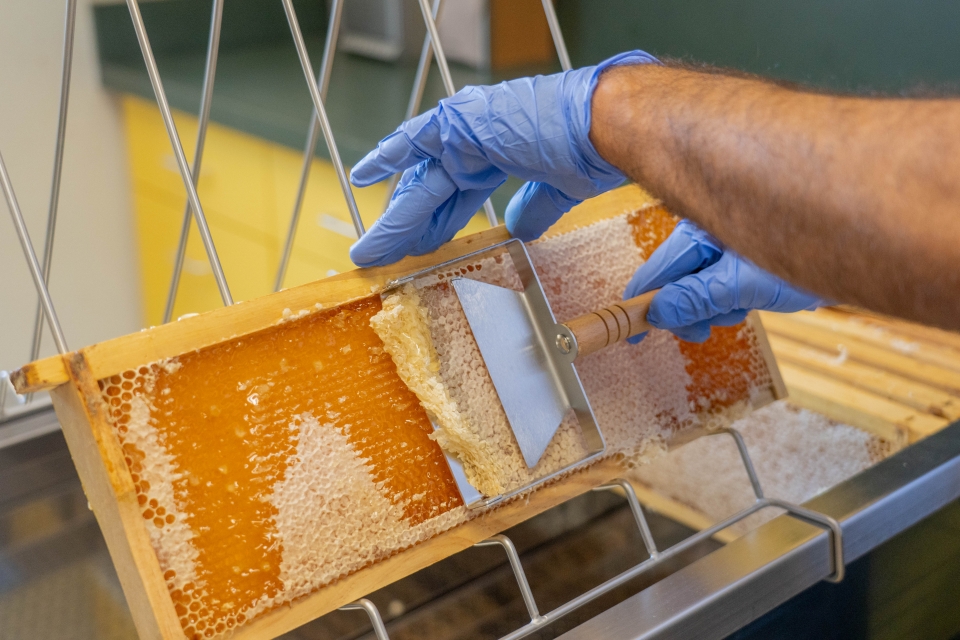 Inside the bee lab, Ozturk begins scraping away the capping. He will use different instruments depending on the size of the capping, including an electrical knife and heating gun. 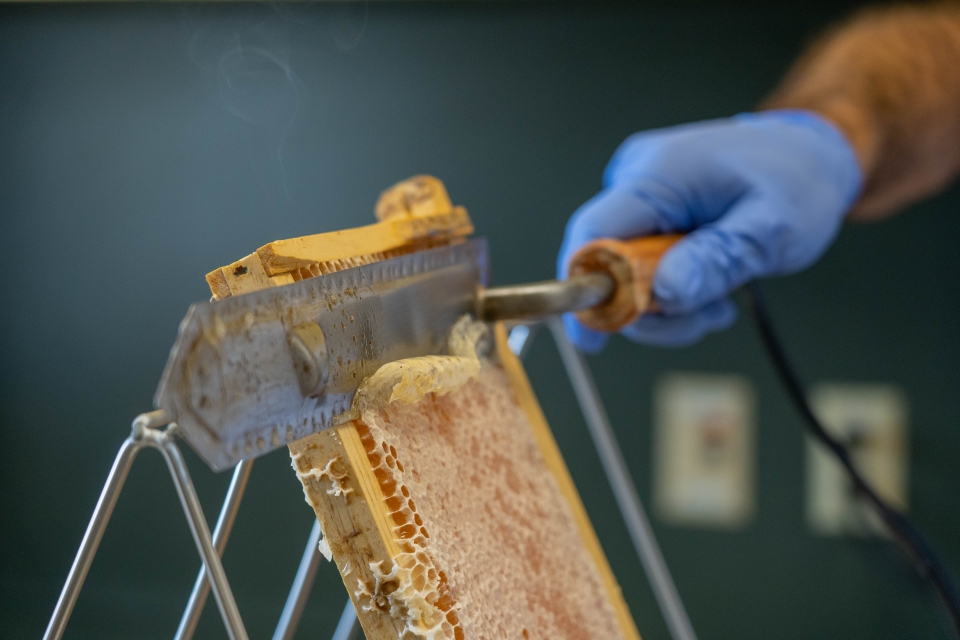 Ozturk uses the electric knife to scrape away the capping. The knife helps accelerate the process when the capping is wider on the frame.

Ideally, the temperature inside the room should be around 90 degrees. The warmer it is, the easier it is to separate the honey from the cells. 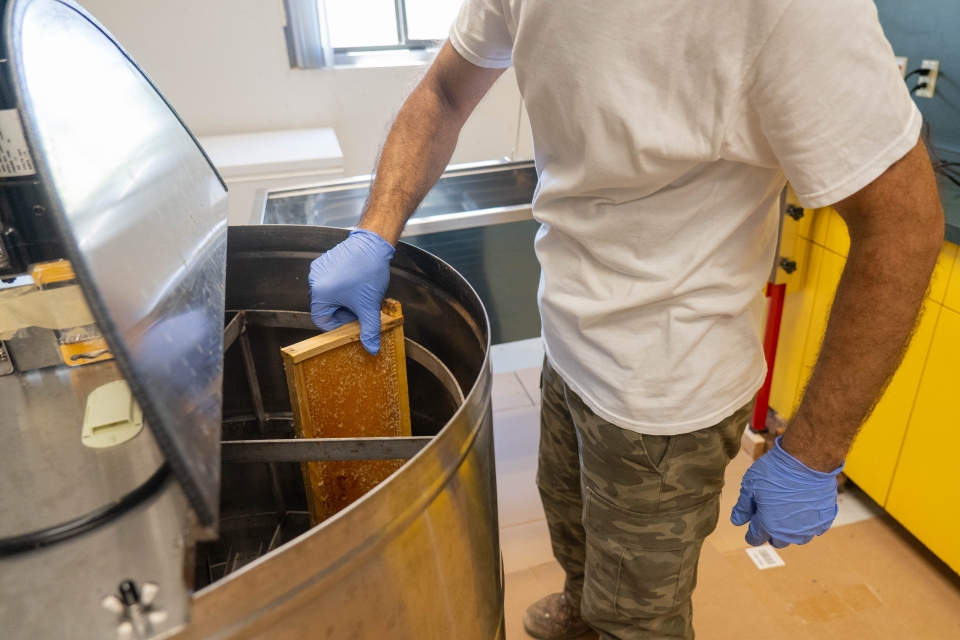 Ozturk puts a frame, with the capping scraped away, in the honey extractor. The extractor, which can hold 20 frames, spins until it shakes all the honey out. The honey is then filtered so it’s smooth and not granulated. 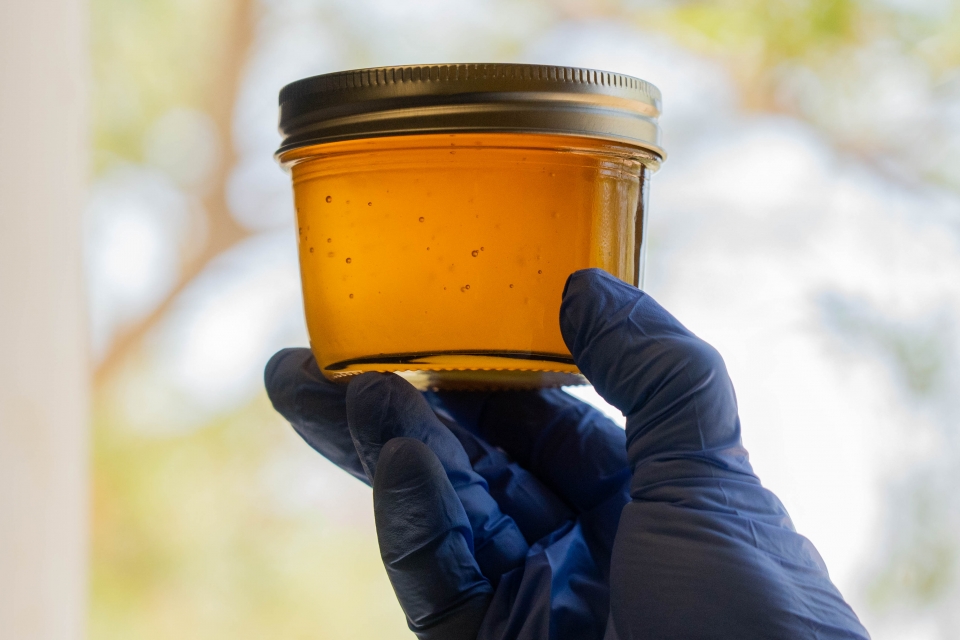 The finished product. Good as gold.

While working in Washington, D.C., April Hobby was surrounded by impressive museum art galleries like the Smithsonian and National Gallery of Art. She wanted to see what else was out there — especially Black-owned art galleries — but wasn’t sure where to start. Now, she’s helping others find these galleries.Originally from Southern California, Hobby joined Arizona State University as a stu...

While working in Washington, D.C., April Hobby was surrounded by impressive museum art galleries like the Smithsonian and National Gallery of Art. She wanted to see what else was out there — especially Black-owned art galleries — but wasn’t sure where to start. Now, she’s helping others find these galleries.

Originally from Southern California, Hobby joined Arizona State University as a student in the Herberger Institute’s School of Art. While at ASU, she had experience in art galleries on campus and saw plenty of behind-the-scenes setups of exhibitions. She graduated with an art history degree in 2014 and later went on to pursue a Master of Education in higher and postsecondary education from ASU in 2016, but maintained her interest in the arts when she moved to Maryland after graduation. April Hobby in London, in front of a 30-foot mural of Michelle Obama by the artist Neequaye Dreph Dsane. Photo courtesy April Hobby

“In 2020 especially, people shifted their focus to supporting Black-owned businesses and art galleries,” Hobby said. “I thought it would be cool to have a one-stop shop for galleries. It started as an Instagram and Google Maps page. I shared other galleries in other cities, and organizations recognizing Black-owned businesses. I built a blog to house articles. It’s important to be intentional about how we’re shopping.”

Hobby said she recommends that students interested in getting practical experience at galleries to reach out and consider interning.

“They need extra hands. Universities can partner with local businesses. They need people for events or lectures. Utilizing these spaces benefits both parties,” she said.

Hobby currently serves as an advisory board member for BlkArtHouse, a social enterprise that promotes and sells original and contemporary art by emerging Black artists that reflects the complexity and richness of Black culture through the BLKMKT. Collections feature original artworks, photography, prints and more from the emerging Black artists supported by the organization.

”Speaking of The Black Curation,” Hobby said that she hadn’t found other places that have a dedicated space like hers, and that she has plans for the future. “I’m not there yet, but I have a goal in mind. I haven’t made movement yet, since during the pandemic, galleries have had funding challenges and closed down. I plan to leverage my fundraising background.”

The Black Curation features galleries all over the country and some abroad, including in England, Canada and South Africa.

“There are a ton in California, especially in L.A., and one in Phoenix named Onyx Art Gallery — they have an event space and a small gallery," Hobby said.

Hobby said a lot of the galleries are in hubs like Atlanta, New York and Los Angeles, but there are some Black-owned art galleries in smaller areas like Santa Fe, New Mexico, and even Fairbanks, Alaska.

“Smaller states are worth amplifying,” she said. “And if people have the willingness to go and visit, iIf people buy artwork and encourage family friends to visit these places, it really does impact and support them economically.”