Honeybees serve as pollinators for the majority of the world’s crops, and their global decline threatens the world’s food supply.

However, hobby beekeepers have been helping to combat this danger by installing hives in their backyards. According to “Bee Culture” magazine, there are now more than 120,000 hobby beekeepers and a 3% rise in honeybee colonies in the United States.

Cahit Ozturk, manager of the Honey Bee Research Lab on ASU's Polytechnic Campus, explains how to care for a colony during a beekeeping course. Several one- and two-day courses, from beginner to advanced, are offered this fall. Photo courtesy Cahit Ozturk/ASU Download Full Image

There are lots of factors to consider before starting a bee colony and lots to learn once you have it going. So, Arizona State University offers several continuing professional education courses on hobby beekeeping at the Honey Bee Research Lab on the Polytechnic campus, led by the School of Life Sciences manager of the facility, Cahit Ozturk.

The classes, which are one day for introductory classes and two days for advanced classes, are held on weekends during September and October and offer students a range of topics as well as the opportunity to take advantage of the equipment at one of the largest bee laboratories in the U.S.

“We have a really good research environment here, so when it’s empty, I say we are wasting our resources,” Ozturk said. “We should share this with other people.”

For those with no experience, Ozturk offers introduction to beekeeping and hobby beekeeping courses that teach the basics: how to start, where to get your colony, when to start, how to check for diseases and parasites, how to harvest your honey and how to take care of your colonies.

More experienced beekeepers can take advantage of the advanced classes, such as instrumental insemination of queen bees, royal jelly production and queen rearing.

One of the biggest concerns of hobby beekeepers, especially in the south, is that their queens can breed with Africanized bees, making them more aggressive and difficult to handle.

“You need to change your queens every one or two years because young females lay more eggs and keep the colonies strong and productive,” Ozturk said. “Otherwise, they will change the queen on their own and mate in flight, and we can’t control that. Africanized bees are good pollinators and producers, but they are very aggressive. We have very gentle Italian bees here, but the only way to keep those breeding lines pure is to control the mating.”

Cahit Ozturk, manager of the Honey Bee Research Lab on ASU's Polytechnic Campus, leads an advanced course on inseminating queens. Young queens are stronger and keep the hive more productive, so it is important to replace your queen regularly. Doing so yourself ensures that your queen will not naturally breed with more aggressive Africanized bees.

Students learn to inseminate queen bees in an advanced beekeeping course at ASU. The class allows students to learn the equipment and test their skills. Three out of the seven students left the class with an inseminated queen. 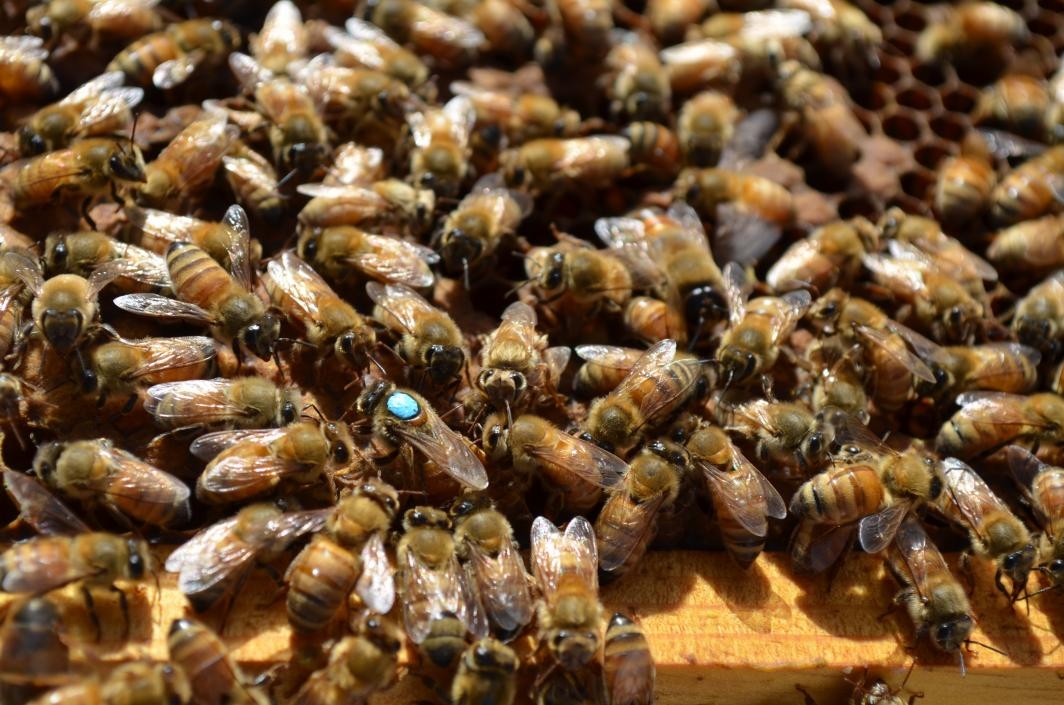 Bees are an important part of our agriculture, and hobby beekeepers are helping to protect their future. Rearing a strong queen is important to the health of a colony. ASU continuing education courses teach anyone from beginners to experts how to maintain a strong colony, rear and breed queens, produce royal jelly, harvest honey and many other skills.

However, inseminating a bee can be difficult and requires special, expensive equipment. Ozturk said that before beekeepers invest in this equipment, they want to be sure they can use it properly. Because of this, Ozturk invested personal funds in purchasing equipment for the advanced classes, allowing students to learn the skills and test the equipment before buying their own.

Of the students who took the class last semester, nearly half left with an inseminated queen to add to their colony.

“Whether they were hobbyist or commercial beekeepers, Dr. Ozturk’s teaching method was well in tune with all of the people in the class," said Ed Russell, who traveled from the Florida Keys to take the course. "He provided assistance and instruction at the level needed for all and sincerely wanted you to leave his course having learned the techniques and skill necessary to be successful at instrumental insemination. After the two days were over, Dr. Ozturk emphasized that he was available anytime to answer questions and provide assistance. I’ve never attended an ASU course before, but I do feel like I’m part of an ASU family now.”

What: Learn to graft larvae for queen rearing, handle virgin and mated queens, mark and introduce queen to colony and basic beekeeping techniques.

Who: Experienced beekeepers and researchers. Limited equipment available. Must provide own equipment or reserve equipment in advance.

What: Learn how to use the tools of instrumental insemination, rear queens and drones, collect semen from drones, insemination techniques and evaluate success of insemination.

What: Learn basic honeybee biology, how to start and maintain a honeybee colony and how to address common challenges for beekeepers.

Who: Anyone interested in learning about bees or beekeeping.

What: Learn technical beekeeping skills and applying techniques to maintain healthy bee colonies as well as hands-on practice handling and managing a bee colony with the European colonies at the Honey Bee Research Lab.

ASU students take their aircraft design skills to the sky

ASU students take their aircraft design skills to the sky

In the competition, undergraduate and graduate aerospace engineering students create small unmanned, electric, radio-controlled aircraft that meet strict requirements, develop a report about their design and complete flight missions on a new theme each year. 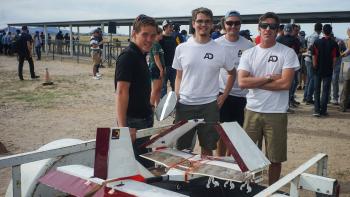 A group of Arizona State University students from the Ira A. Fulton Schools of Engineering was one of the 77 teams out of 142 total entries that participated in the final flyoff round of the competition.

The aircraft had to pass four simulated aircraft carrier ground and flight activities.

First, the aircraft needed to autonomously fold and lock its wings to pass through a 3-foot-by-2-foot box simulating a transition from the hangar to the flight deck.

Then the ASU team’s aircraft had to fly three laps of a course as quickly as possible.

Next, the aircraft donned a radome (a dome that protects radar equipment on the outside of the aircraft) for a reconnaissance flight. The radome needed to remain stationary for takeoff and landing but had to rotate during flight.

Lastly, the team took their aircraft on the offensive with a 10-minute attack flight in which it completed as many laps as possible while dropping an “attack store” payload made of foam. 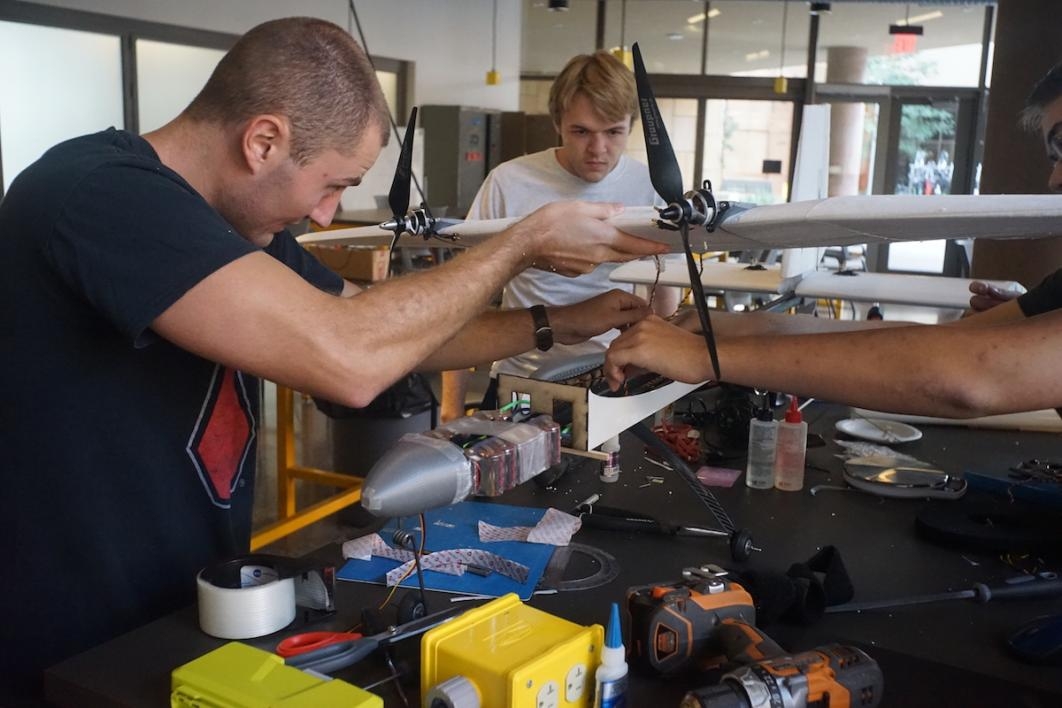 Nick Kolesov and Don Wood take the aircraft on a test flight near the ASU Polytechnic campus. The team benefitted from hitting production targets early to refine their design for the AIAA DBF Competition Flyoff. 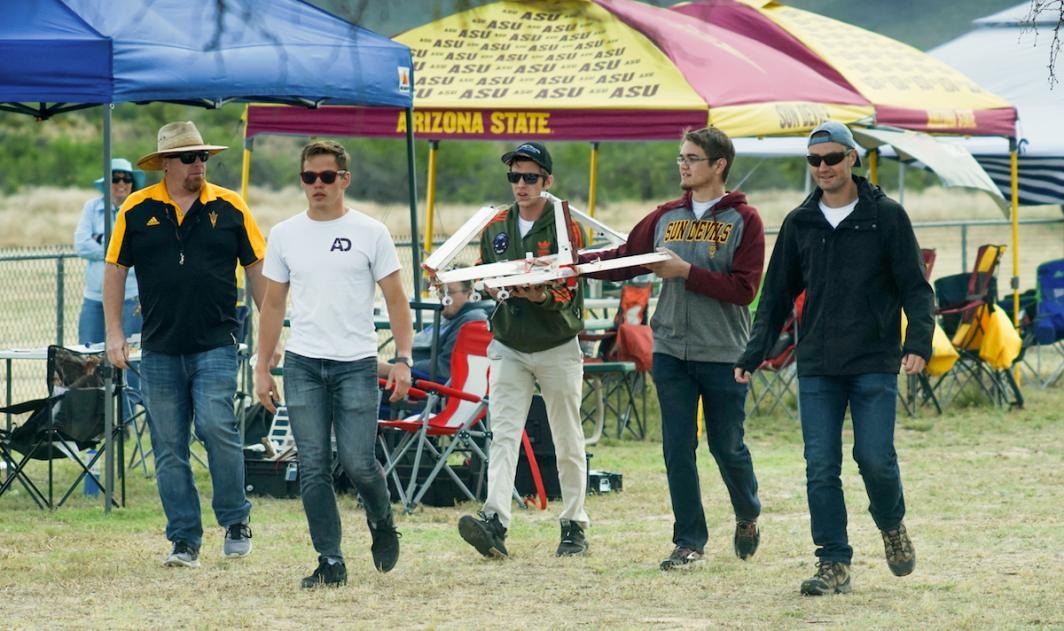 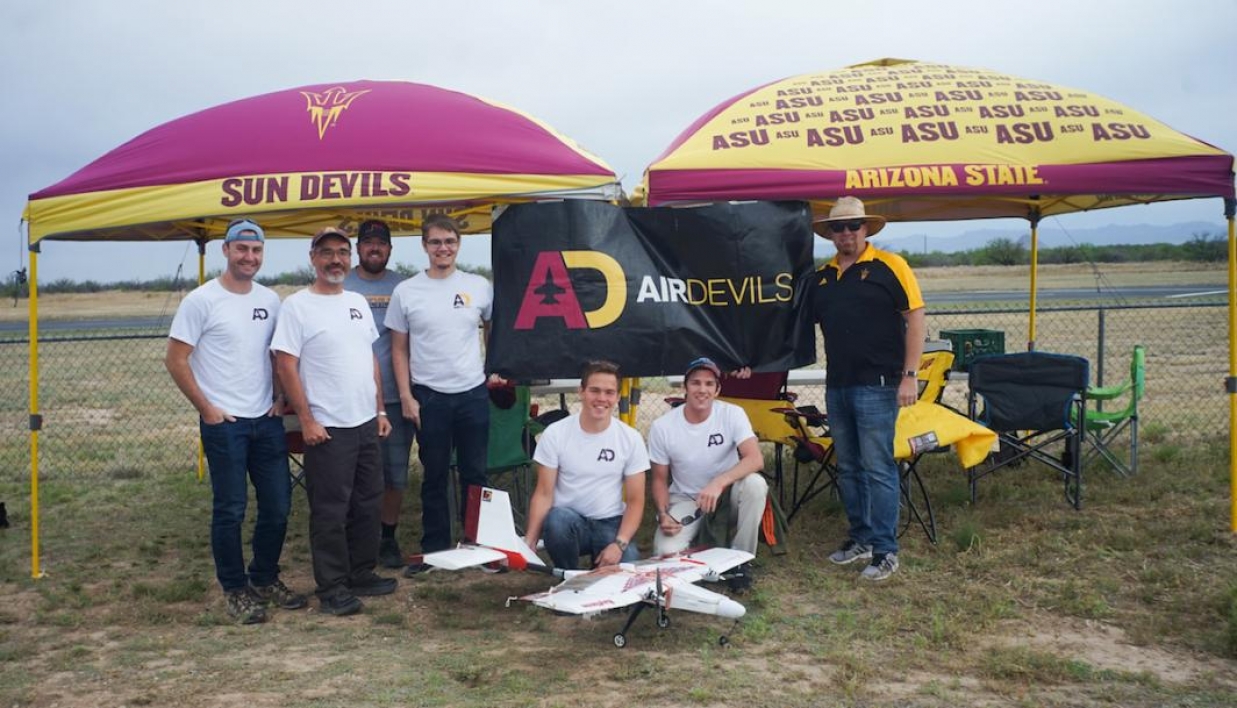 Kolesov, Draganchuk and Kosednar developed the aircraft with other members of the Air Devils student organization under advisor Timothy Takahashi, an aerospace engineering professor of practice in the School for Engineering of Matter, Transport and Energy, one of the six Fulton Schools.

“AIAA Design/Build/Fly is a great experience because students have to learn how to design and fabricate hardware that works in the real world, which means it has to reliably fly in real weather," Takahashi said.

The ASU team members were diligent about getting things done early, which contributed to their success.

“With the team running ahead of schedule, we got a lot of time to work out the detail kinks in our design,” Takahashi said. “The lessons learned came from a considerable amount of successful practice flights.”

This year’s team was a relatively young one, comprised of mostly first- and second-year students, with only two third-year students. Many of them were competing for the first time and building their first competition aircraft.

“The most unique thing about our aircraft was the attention and detail we put into creating the perfect wing shape for our mission,” Kolesov said. “For all of fall semester, our flight sciences lead, Luke Burgett, worked with Dr. Takahashi to test different airfoil shapes, wing twists and thicknesses to create a design that would best suit our need. The benefits of this were clearly visible in how stable our aircraft was coming off the ramp at low speeds compared to other schools.”

Their design also helped the team take on the requirement of a short, 10-foot take-off runway of the simulated aircraft carrier. Kosednar said they “utilized the ‘wind’ generated by the propellers directly to produce lift for the wing” rather than the engine to generate forward airspeed and lift, as many other teams did.

The payload mission — in which teams could score the most points — ended up being the most challenging.

“It was extremely difficult to design a reliable payload-release mechanism in the mission rule-set,” Kosednar said, noting the payload foam missiles had shorter tails than the ones used in tests, which were less stable and would fail to release in their aircraft’s mechanism.

However, they excelled in the non-payload flight mission.

“Our first attempt was relatively slow compared to the other teams, but during our second attempt we managed to get one of the fastest times.”

Due to the large number of teams competing, there was a lot of time to chat with other competitors while team members waited to fly. It was a valuable lesson to learn how teams from other schools addressed the same design and mission challenges.

“Seeing other schools fly was a very interesting experience, mainly because it highlighted how open-ended engineering problems can be,” Kolesov said. “After working on one design for a year, you kind of convince yourself that this is the only way to solve the problem, so it’s always interesting to see how other planes in the competition are different from yours.”

Kosednar noted that every team had a different solution for each component of the aircraft, and he talked with many of them to see “how they went about their design process and how or why they chose to do certain things that our group didn’t do for one reason or another.”

In all, the team members were happy with the results, as they were just getting the hang of some of the basics of aircraft sizing, weight estimation and aerodynamic analysis.

Landing among the top 20 teams was an accomplishment, but next year, the team will aim to earn a top-10 spot for the first time in ASU’s AIAA DBF competition history.

The same team members will be back for the 2019-2020 season competition. This year, they mastered a basic design, but next year they can be more ambitious, which is the way to win, said Kolesov, an experienced competitor.

“After three years of participating in DBF, I’ve learned that you can’t win the competition by taking an approach that you know will work from the start,” he said. “The way to win is to come up with an aircraft concept that seems too ambitious to ever make it off the ground and then find a way to make it work.”