In Oman, on the Persian Gulf, there is a large slab of ancient seafloor — including ultramafic rocks from Earth's upper mantle — called the Samail Ophiolite. These unique rocks not only provide valuable information about the ocean floor and Earth’s upper mantle, they may also hold clues to life on other planets.

To find these clues, a team of scientists from Arizona State University, who are members of the Group Exploring Organic Processes in Geochemistry led by Everett Shock of the School of Earth and Space Exploration and the School of Molecular Sciences, traveled to Oman to investigate a geological process unique to these rocks, where water reacts with them to create hydrogen gas. This process, called “serpentinization,” supplies hydrogen gas to microorganisms that oxidize it for energy. For this team, gaining an understanding of this process may lead to a better understanding of life on other planets and the development of space exploration instruments that can detect life on ocean worlds beyond Earth. The results of their findings have been published in AGU’s JGR Biogeosciences, with lead author Alta Howells, who is a former ASU graduate student in the School of Life Sciences and is now a NASA Postdoctoral Program Fellow at NASA Ames Research Center. Shock is a co-author on this study.

“It is believed that processes like serpentinization may exist throughout the universe, and evidence has been found that it may occur on Jupiter’s moon Europa and Saturn’s moon Enceladus,” Howells said.

For their study, the research team set out to determine what might influence the biodiversity of serpentinization-hosted ecosystems on Earth. Specifically, the team focused on methanogens, which are microorganisms that produce methane by oxidizing hydrogen gas with carbon dioxide. Methanogens are found in serpentinization-hosted ecosystems and are simple life forms that likely evolved early on Earth. 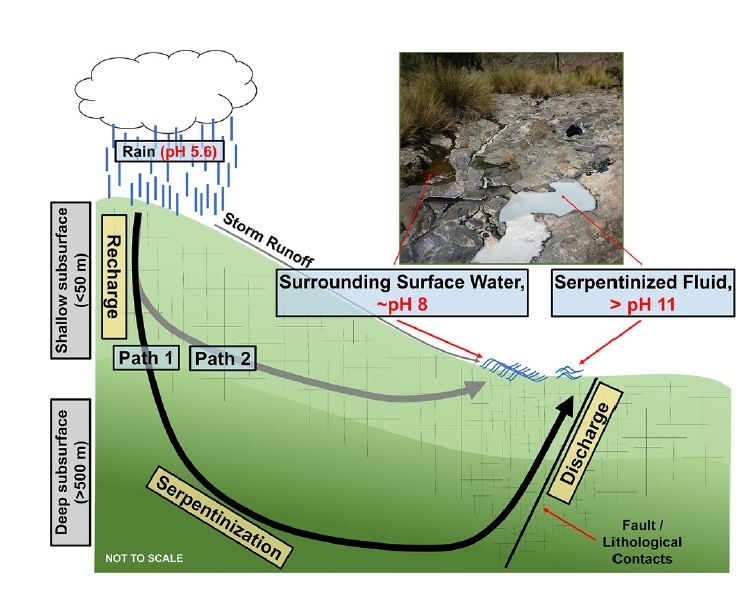 When studying the serpentinized fluids in the Samail Ophiolite of Oman, the team found that not all serpentinization-hosted ecosystems may support methanogens. In systems where methanogens are not supported, organisms that reduce sulfate for energy may be prevalent.

“Because sulfate reducers don’t produce methane, this can have a big influence on the instrumentation we develop and deploy on missions to detect life on other planets,” Howells said.

Additionally, from an Earth perspective, the distribution of methanogens across the sites they studied suggests that methanogens in serpentinized fluids require more energy than methanogens found in freshwater or marine sediments.

While the cause of this has yet to be determined, it may be attributed to the high pH of serpentinized fluids or the low availability of their electron acceptor, carbon dioxide.

“A requirement for energy is fundamental to all life on Earth,” Howells said. “If we can develop simple models with energy supply as a parameter to predict the occurrence and activity of life on Earth, we can deploy these models in the study of other ocean worlds.”

As the software development landscape evolves, new security vulnerabilities are surfacing. Traditionally, a software’s source code could shed light on its vulnerabilities, but acquiring high-quality source code for the purpose of finding weaknesses can be difficult because of “compiling.”Compiling refers to the process of transforming and optimizing a program’s source code to generate a fi...

As the software development landscape evolves, new security vulnerabilities are surfacing. Traditionally, a software’s source code could shed light on its vulnerabilities, but acquiring high-quality source code for the purpose of finding weaknesses can be difficult because of “compiling.”

Compiling refers to the process of transforming and optimizing a program’s source code to generate a final executable, which is a file that causes a computer to perform indicated tasks according to the encoded instructions. While an executable performs well and runs quickly on computers, it no longer has any information about the original source code. 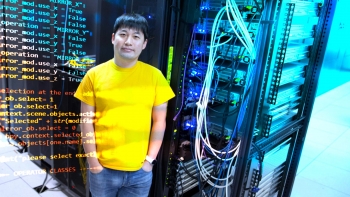 Assistant Professor Ruoyu (Fish) Wang has received National Science Foundation recognition and financial support for his work to mitigate the effects of malware and computer viruses by making them easily understandable. The research results may enable analysts and researchers to uncover source code in a manner that identifies vulnerabilities. Photo by Erika Gronek/ASU Download Full Image

Today, more and more software is developed in high-level programming languages, such as C++, Go and Rust, because of their many advantages, including higher development speed and better software engineering practices. Most importantly, programs written in high-level languages are compiled into machine code, the elemental language of computers, and will execute on computers at what is known as native speed. Executing at native speed allows for the fastest results.

Unfortunately, cybercriminals have also joined the transition to high-level programming, meaning a growing number of computer viruses and malware are programmed using these languages. And existing techniques do not allow security analysts and researchers to uncover malevolent source code with satisfactory quality.

However, existing techniques do not allow security analysts and researchers to uncover source code with satisfactory quality.

Ruoyu (Fish) Wang, an assistant professor of computer science and engineering in the Ira A. Fulton Schools of Engineering at Arizona State University since 2018, is addressing this security concern with a 2022 National Science Foundation Faculty Early Career Development Program (CAREER) Award by discovering new techniques for recovering source code, a process known as decompilation.

“My project will develop a set of generic, automated decompilation techniques that transform these viruses and malware samples into accurate, concise and human-readable source code,” Wang says. “As an added benefit, this project will enable software hardening and vulnerability mitigation without accessing the high-level language source code of software, which will help improve the security portfolio in scenarios where legacy software is in use.”

Researchers have worked on binary decompilation for more than 25 years, yet a critical problem that continues to hinder progress is the lack of a clear metric to evaluate the output quality.

“A fundamental problem, as I see it, is that decompilation can lead to many different end goals, such as software behavior analysis, vulnerability discovery, generic hardening, patching and recompilation,” Wang says. “These goals may have vastly different requirements on various aspects of the output.”

Along with his students and colleagues in the School of Computing and Augmented Intelligence, one of the seven Fulton Schools, Wang will first develop a set of objectives under each end goal, then create standardized metrics for evaluating the quality of decompilation output.

“Guided by these metrics, we will develop novel techniques that will transform machine code into a high-level intermediate language known as angr IL, or AIL,” Wang says. “With different end goals, we may have different focuses or make different compromises during code transformation.”

The development of a new decompiler for each high-level programming language can be tedious and expensive. With that in mind, Wang and his team will aim to automatically generate programming-language-specific decompilation transformation rules by using a novel technique called Compiler Transformation Inference and Inversion, or CTII.

“We will use the latest progress in the fields of natural language processing and evolutionary computation to assist with the generation of these transformation rules,” Wang says. “We will open source all research artifacts under this award. The foundation of our research, angr and angr decompiler, are already available on GitHub.”

Wang’s research will take place in ASU’s Laboratory of Security Engineering for Future Computing, known as SEFCOM. Wang credits the skilled reputations of his SEFCOM colleagues — Assistant Professor Yan Shoshitaishvili, Associate Professor Adam Doupé and Assistant Professor Tiffany Bao — all of whom are computer science and engineering faculty in the School of Computing and Augmented Intelligence, as one of the reasons his project received NSF funding.

“Our team is well known in the computer security community for conducting open, usable and reproducible research in binary analysis,” Wang says. “I like to work with fun and awesome people who share similar ideologies, and I firmly believe that modern systems research is only possible via a coordinated team effort. My colleagues and I form a great team at SEFCOM and ASU, and I do not see any possibility to enjoy the same level of productivity through teamwork anywhere else.”