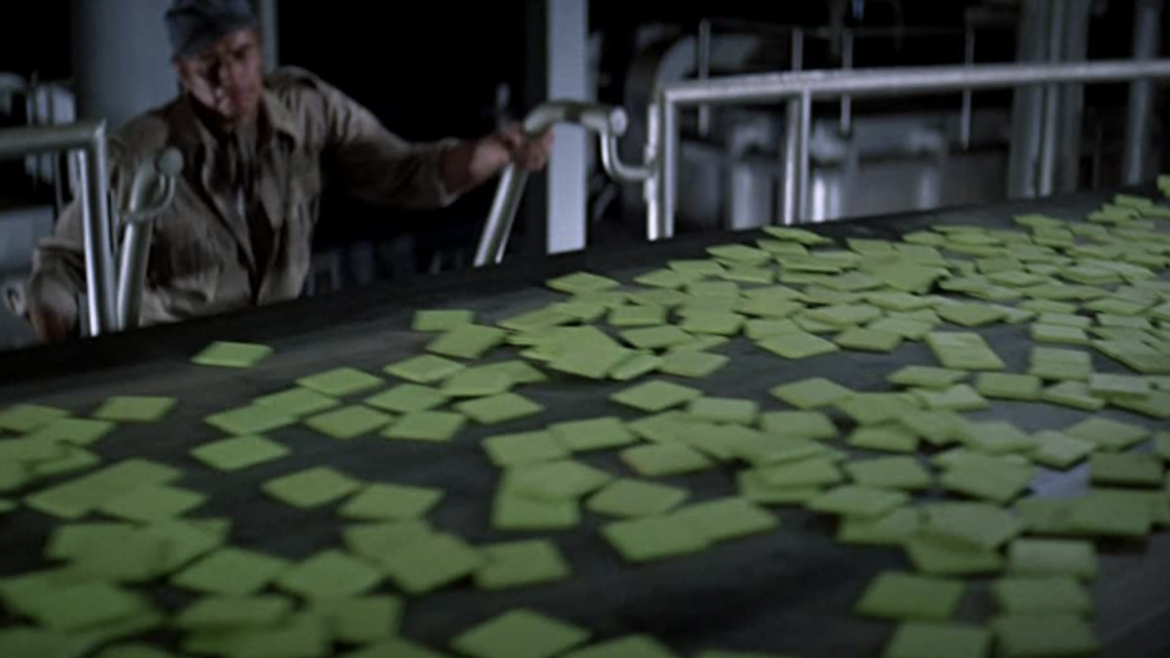 Spoiler alert: In the final scene of the 1973 movie “Soylent Green” actor Charlton Heston, who plays detective Frank Thorn, is being led off on a stretcher following a gun battle when he desperately reveals the secret he wants the world to know: The nutritious wafer Soylent Green is composed of pulverized remains of human corpses.

Yes, the movie is a fictional piece of work. Then again…

The film portrays a world being devastated by climate change, its oceans polluted with waste; overpopulation and overuse of resources lead to shortages of food and water; housing prices skyrocket to the point only the elite can afford apartments.

The year the movie was set?

April 19 marks the 49th anniversary of the film’s release, and its futuristic, dystopian themes have some relevance today, so much so that four Arizona State University professors, all in different fields, could address the movie’s, well, prescient takes.

A jar of strawberry jam costs what?

In the movie, the food shortage is so extreme a jar of strawberry jam is $150 and people weep at the sight of beef. Housing in New York City, where "Soylent Green" is set, is only affordable to the richest of the rich. The elite, they’re called.

Everyone else sleeps in their cars — or on the street.

The affordability of resources isn’t quite as class-driven today as it was in the film — unless you’re trying to find a decently-priced apartment in the Phoenix metro area.

“The housing shortage has become particularly acute over the past year,” said Alison Cook-Davis, associate director for research at ASU’s Morrison Institute for Public Policy. “The vacancy rate is historically lowThe Arizona Housing Department estimates 270,000 affordable rentals are needed statewide. Source: https://www.azcentral.com/story/money/real-estate/catherine-reagor/2021/11/14/arizona-needs-280-000-new-affordable-homes-but-roadblocks-slow-progress/6361041001/, so the rents are getting pushed up and up.”

The rising rental prices, Cook-Davis said, will likely cause an even greater increase in the number of homeless people in the Valley. According to a January count by the Maricopa Association of Governments, the unsheltered homeless population has increased from 1,053 in 2014 to 5,029 this year.

“It’s having really devastating effects, especially for low-income households,” she said. “Those are the individuals who are just trying to make ends meet and really get squeezed because they were already potentially cost-burdened in terms of the percentage of their income they’re paying toward housing.”

Pricing people out of affordable rentals isn’t the only problem, Cook-Davis added. Those without significant resources can’t get into a home, either, which is very "Soylent Green"-like.

“It’s people who are kind of in the low or very low income bracket who are trying to get into the housing market for the first time,” she said. “It’s almost impossible. So young people who may have good jobs still aren’t able to buy a home.”

The power of (mis)information

The Soylent Green corporation controls the world’s food supply, and in many ways, the information faucet to the 7 billion people around the world. (That's one more thing the movie accurately forecast: Today’s world population is 7.9 billion).

In doing so, the corporation protects itself from public examination or even the most cursory questioning. Its duplicitous messaging is most evident when people choose to be euthanized. They see a beautiful montage of waterfalls, deer and flowers – before their remains turn into wafers of Soylent Green.

It’s communication as control, and it’s magnified by today’s technology.

“We’re living in a world where we’ve somehow got to play catch up with how we use our technological abilities wisely,” said Andrew Maynard, an associate dean for curricula and student success at ASU’s College of Global Futures. “It’s exactly this tension that is seen in a film like 'Soylent Green,' where you have a layer of society that is using technology both to maintain their own position, control other people and to actually suppress other people.

“And most people don’t question it, right? They live miserable lives, but they’re not rebelling against the machine. They’re not asking hard questions, and we have to ask why and what we can learn from that.”

Maynard concedes that the world is a subtler and far more complex place than it was in the movie. But, he added, that doesn’t make misinformation any less dangerous.

“People absolutely do not think critically,” he said. “You see this in so many places, and it almost seems like the more technologically complex we get, the easier it is for people not to think.

“Just look at social media and how trends sort of stream across social media. Look at movements such as the anti-vax movement or conspiracy theories. All of those stem from increasingly complex communication technologies. You see how people, because of lies and misinformation, don’t question things. There is that element of sheep-dom that we’re seeing right now.”

Joni Adamson, a President’s Professor of environmental humanities in the Department of English, teaches a class called “Environmental Literature and Film.”

Yes, "Soylent Green" is on the curriculum.

“We play around with what the future food system is going to look like, and how are we going to get there?” Adamson said. “So we watch 'Soylent Green' and ask questions like, ‘Is this what we want the future to look like? And if not, then what do we need to do to have a different future?’"

In the movie, the Soylent Green corporation advertises that its wafers are being made from ocean plankton when in reality, all ocean life has died. Thus, the corporation throws human carcasses into waste production plants.

A future reality? Let’s hope not. A cautionary tale? Perhaps.

“There’s a process called acidification,” Adamson said. “Acidification is when all of the chemicals that are being used in our agricultural fields run through the rivers and then into the bigger rivers and then out into the ocean. And when they’re out in the ocean, one of the things they tend to do is cause algae to bloom, and algae bloom leads to a deprivation of oxygen in the water, and fish die.

“The film itself imagines something that could happen and is happening. It just takes it to the extreme.”

Maynard said the film, if stripped of its dystopian elements, accurately portrays the gap between haves and have-nots when it comes to food supply. According to the United Nations, nearly one-third of the world’s population didn’t have access to adequate food in 2020.

“We have this question of who gets access to stuff versus who doesn’t,” he said. “Who has the privilege and who doesn’t. That’s absolutely caught in the film … One of the things I find fascinating watching science fiction movies, including 'Soylent Green,' is no matter how dystopian things are in the sci-fi movie, you can almost always find some aspect of global society that mirrors it.”

Including how corporations can create class distinctions by affordability and accessibility of their products.

“They’re not just making Soylent Green to be philanthropic,” Adamson said. “They’re controlling the food system in order to be in control of who is in what class.”

Joshua Vasquez, a lecturer in film and media studies in the Department of English, first watched "Soylent Green" as a boy when it would pop up on television on Saturday afternoons.

“It always seemed a little awkward to me,” he said. “And I know in pop culture, it became something of a joke because Phil Hartman did a parody of it on 'Saturday Night Live.'”

But as Vasquez grew up, became more interested in film and watched "Soylent Green" again, he recognized a melancholy and sense of anxiousness that grips some people today.

“This is not a political screed, but we are living in a very fractured political landscape, which is not exactly but largely similar to this kind of fracturing in the late 1960s and early 1970s,” he said. “And that profound distrust of government can lead to this feeling of paranoia. That sense of being very aware of the dangers of the moment, at least I would argue, has kept the movie very fresh.”

And while "Soylent Green" is clearly an exaggeration, it’s what it represents that makes it relevant today.

“I mean, we’re obviously not making wafers out of human remains and a jar of strawberry jam doesn’t cost $150,” Vasquez said. “But people will say, ‘This is where we’re heading unless we do something.’”

You could say the future in "Soylent Green" has become, 49 years later, the present.

“Essentially,” Adamson said, “it was a movie ahead of its time.”

Katie Vahle (Defensive) and Carley Adams (Offensive) were both named the Pac-12 Player of the Week. ... Katie Vahle (Defensive) and Carley Adams (Offensive) were both named the Pac-12 Player of the Week.