In high school, Simon Anthony Lee was a part of multiple political advocacy organizations, one of which, the Minority Student Achievement Network, took him to a national conference in Glendale, Arizona.

While in Arizona, he toured Arizona State University’s Tempe campus. After seeing the beauty of the campus and scenery, Lee, who was only a sophomore at the time, knew he found where he wanted to go to college. 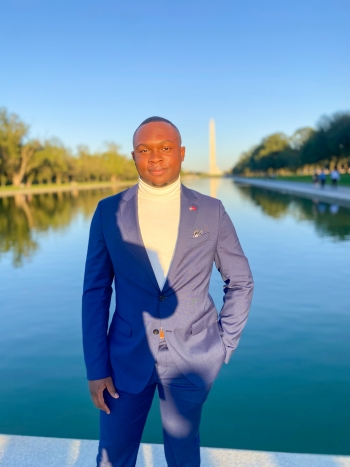 A decade later, Lee is currently working on his third degree from ASU — all from the School of Politics and Global Studies.

Lee’s path to completing his Bachelor of Arts in political science with certificates in international security, human rights and socio-legal theory was an untraditional one. He started his undergraduate experience at a sophomore level of credits because he spent time in the Marine Corps.

He was then deployed to Okinawa, Japan, for a year in the middle of his studies. Even though his graduation was pushed back due to his deployment, Lee shared that his time as a Marine instilled in him discipline and the ability to tap into learned perseverance when in difficult situations.

“Furthermore, my time in the Marines has reminded me that different opinions are built from different life experiences, and to reject an opinion no matter how outlandish it might seem to you, is to discount the experiences of another,” Lee said.

“Instead, use the knowledge and research you attain to find common ground and move forward in conversation.”

While working on his undergraduate degree, Lee found ways to spend time on the campus he fell in love with. He created and governed the ASU chapter of the Caribbean Student Association through the Black African Coalition.

“My father is from Trinidad and my mother is from Barbados,” Lee wrote on the Caribbean Student Association Facebook page. “I was born in the Bronx, (New York). It’s been my dream ever since arriving on (the) ASU campus to have a community of Caribbean people (here). I’m honored to bring that dream to life.”

Lee was also a part of the Pat Tillman Veterans Center’s Outreach Team, and while working on his dance minor, he met his significant other during a salsa class.

“During my bachelor’s degree is where I met a handful of lifelong friends and retained a deeper understanding of myself and my purpose in the world,” Lee.

With his newfound research interests, Lee was looking into graduate programs when he met with former Ambassador Edward O’Donnell from ASU’s Leadership, Diplomacy and National Security Lab.

At the time, O’Donnell was director of the School and Politics and Global Studies’ International Affairs and Leadership master's program, offered through ASU Online. Lee was hooked, however when the launch date for the program was pushed back, Lee decided to pursue a different online master’s degree from the School of Politics and Global Studies first — global security.

“I liked the flexibility of the program and the vast knowledge the professors of the program have to offer,” Lee said of the degree, whose faculty consist of internationally recognized thought leaders, including influential practitioners and top scholars.

Lee would graduate the with his master's degree in global security in one year, and followed it up by enrolling in the master's program in international affairs and leadership – joining their inaugural class last fall.

“I’ve loved the (master's program) program,” said Lee. “It’s everything I ever imagined.”

According to Lee, the coursework, led by former ambassadors and high-ranking officials, heavily utilizes practical applications where they “simulate roles of international actors in a possible crisis” and “draft memos to high-ranking officials in the DoD and the National Security Advisor.”

“I enjoy assignments like that such so much more because we are able to be graded on our understanding of class material while practicing the very things we’re expected to be good at in this field,” he said.

Even though Lee's graduate programs have been online, like when he was an undergraduate, he is finding ways to get involved with the ASU community. Lee is currently a Global Human Rights Hub Fellow, which allows him to learn from Comstock once again — this time, as his fellowship adviser.

Lee shared that he was excited to learn more about the international law aspect of national security through the fellowship. His first blog post as a Global Human Rights Hub Fellow was titled “The U.S. is losing the Cold War on Global Influence.”

Between his studies, Lee also finds time to work with ASU's Global Security Initiative as a research aide on narrative, disinformation and strategic influence. He is also currently a case worker for U.S. Rep. Greg Stanton, where Lee says he has been able to appreciate the impact one can make in someone’s life by being there for those in a time of need.

He is considering a career at a think tank, consulting firm or as a political affairs officer, where he can utilize his two master’s degrees and the professional experiences he’s achieved while at the university.

“My experience at ASU has been amazing,” said Lee. “The faculty at the School of Politics and Global Studies are so supportive and undoubtedly are vying for your success. ASU will always hold a place in my heart.”

From building yurts in Mongolia to serving as an international election observer in Ukraine, Arizona State University alumnus Brandon Urness’ unconventional journey has now led him to pursue a master’s degree.Urness started his ASU journey at the School of Politics of Global Studies, where he received his bachelor’s degree in political science in 2015. As a transfer student from a local comm...

From building yurts in Mongolia to serving as an international election observer in Ukraine, Arizona State University alumnus Brandon Urness’ unconventional journey has now led him to pursue a master’s degree.

Urness started his ASU journey at the School of Politics of Global Studies, where he received his bachelor’s degree in political science in 2015. As a transfer student from a local community college, he was drawn to ASU’s program for the opportunities to network and build relationships in the field of politics. 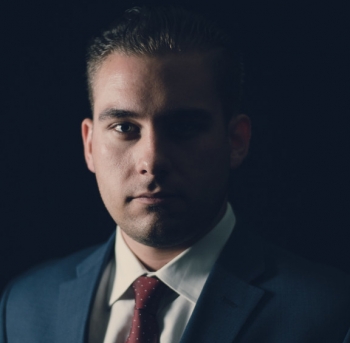 As an undergraduate, Urness participated in a number of influential internships, including at the Arizona Supreme Court, the United States Congress, the city of Phoenix and the Arizona Republican Party.

After graduating, he traveled to Mongolia, where he served as a missionary for two years, building yurts and learning about the country. As his time in Mongolia came to a close, he was looking for international language programs and learned about the Critical Languages Institute’s Ukrainian summer language program.

“I actually applied for the Russian program and one of the program directors told me about a grant that was available if I switched to Ukrainian,” Urness said. “ I thought, ‘You know, great, if there's money available, Ukraine is right next to Russia, and Ukraine is important with everything happening in the news.’ From there it just kind of fell into place.”

“My professor was extremely passionate, and she even gave us extracurricular activities if we wanted to get more involved or understand some of the recent political things at the time. I feel like I really got way more than just a language education,” he said.

Learning Ukrainian opened up a number of doors for Urness — most recently, he worked as an election observer for the Ukrainian presidential election in 2019. Today, he is working on completing his online master’s degree in political psychology. He shared more about his Sun Devil story.

Answer: I would say that I'm a big believer that the experiences we have kind of shape where we end up. I started college on a path of wanting to go to law school. Then, when I was in college, I had these internships and I realized that I was more excited about politics than I was about law school. I was following what was happening in the news. I was taking foreign policy classes. It was just a time where there was just a lot of information and a lot of high energy stuff, so it kind of planted that seed and grew from there.

Q: What’s your favorite part about the career you have chosen?

A: Politics are so exciting and there's always another fight to join. There's never a dull day and the work is significant. It's personally significant to me, and I think of the struggle for democracy and for elections. It's also the story of America, and we see how important these things are around the world, from Ukraine and most recently in Hong Kong, with democratic protests, and there's an uprising happening right now in Kazakhstan. There's never going to be a shortage of people who can help, who can train, who can organize and who can support the individual right for freedom.

Q: What has been your biggest motivation to succeed professionally?

A: I would say that I'm pretty motivated by the fight. I would say that the fight is important to me, and bringing the fight, whether it's at home or internationally, to the enemies of freedom anywhere is probably the biggest motivator for me. It's not win or lose, it's whether or not you've done your best and you fought with everything you have.

Q: What advice would you give to new students?

A: I would say just read books. I think a lot of students these days don't make a lot of time for reading, and I would say it doesn't really matter what you read as long as you're challenging your opinions and critically thinking and always focusing on your growth. I think if you have that kind of ember in your spirit, no matter how small, obviously it'll smolder, but eventually it's going to break out into a fire.

A: I want to finish my master's program and apply for a PhD at ASU. I'm very interested in teaching and being a local resource for politics and international issues for Arizona students. I would say that's kind of my longer goal. Ten years from now, I'd like to work in consulting or some kind of campaign role. Right now, I remain focused on my academics.