On Oct. 18–22, the inaugural class of students from the Online Master of Arts in International Affairs and Leadership program at Arizona State University traveled to Washington, D.C., for a week’s worth of immersive training and activities.

Students of the ASU Online master’s program, offered by the School of Politics and Global Studies, have the option of two separate intensive in-person experiences in Washington, D.C., over the course of the program, allowing them direct access to the professionals and institutions involved in U.S. foreign affairs. 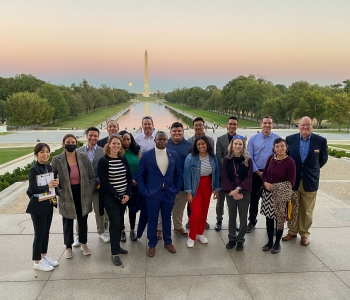 The inaugural class of ASU Online Master of Arts in International Affairs and Leadership program students during a week of activities in Washington, D.C. Download Full Image

“Washington Week provides our students the fantastic opportunity to network with top foreign policymakers in Washington, D.C.,” said School of Politics and Global Studies Director and Professor Magda Hinojosa. “But the Washington Week experience does more than that, too: It gives our students a chance to meet their exceptional colleagues and faculty members in person for an experience they will never forget.”

“This unique in-person experience as part of an ASU Online program introduces firsthand the international and foreign policy environment of Washington, D.C., to the (international affairs and leadership master's) students,” explained O’Donnell, program director and professor of practice at ASU. “They meet top foreign policy professionals and learn the most current status of the leading global issues that will confront them as they become future leaders in the global arena.”

To reinforce the curriculum, the cohort visited various historic sites in Washington, D.C., such as the U.S. Institute of Peace, the U.S. Holocaust Museum, the U.S. Capitol Building, the Diplomacy Center for the U.S. State Department and multiple monuments.

“We were able to expose our students to the key concepts of character-driven leadership through hands-on exercises, visits to key locations in the nation’s capital for experiential learning and application, as well as meetings and discussions with senior leaders,” said Freakley.

ASU alumni, many of whom who participated in the Policy Design Studio while at ASU, also met with students during an evening reception. Students were able to connect with these alumni, mostly from the School of Politics and Global Studies, who work in Washington, D.C., and with the U.S. State Department and other U.S. government agencies and Congress.

“The networking and collaboration I was able to achieve was more than I expected,” said Simon Anthony Lee, a current international affairs and leadership master's student who also graduated from ASU with a bachelor's degree in political science and an master's degree in global security. “So much that I’m still texting people I met throughout the week, bouncing ideas off of each other for future projects.”

Throughout the completion of their degree, students will continue to receive mentoring, career counseling and instruction from program faculty and outside speakers with real-world experience developing foreign policy and programs. At the end of their time in the master's program, students will travel back to Washington, D.C., for another week of activities.

“Retired Ambassador O’Donnell, retired Ambassador Polt and retired Lt. Gen. Freakley have done well to ensure a sense of community among this cohort during a virtual program,” said Lee. “The variety of speakers that volunteered their time was essential for us to see the many fields and career paths of foreign relations. I’m excited to come back in due time and reap the benefits of the education gained with this degree.” 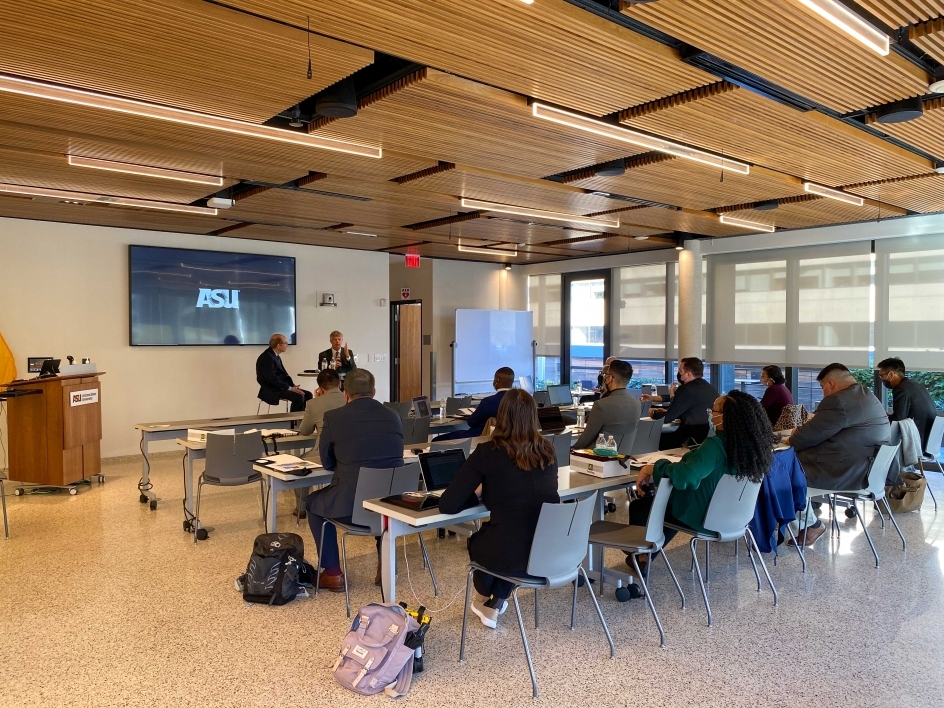 ASU Online Master of Arts in International Affairs and Leadership students participate in a discussion on national security with emphasis on Russia, Ukraine and the United States with Ambassador William B. Taylor and Ambassador David Johnson. 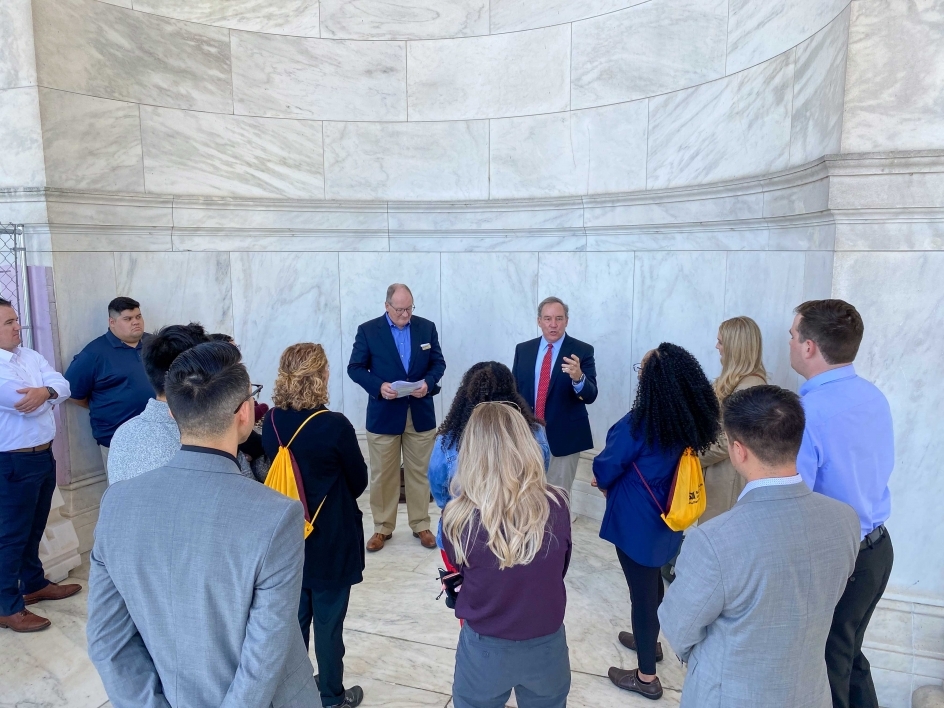 Students at the Jefferson Monument during their monument walk with retired Lt. Gen. Benjamin Freakley and Ambassador Michael Polt. 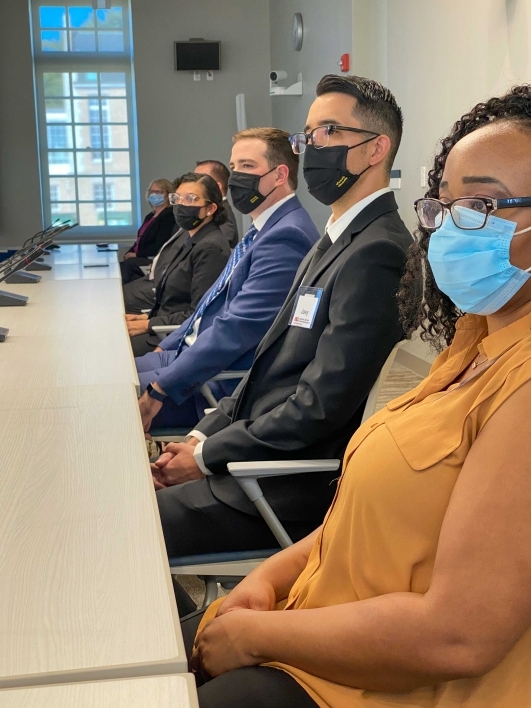 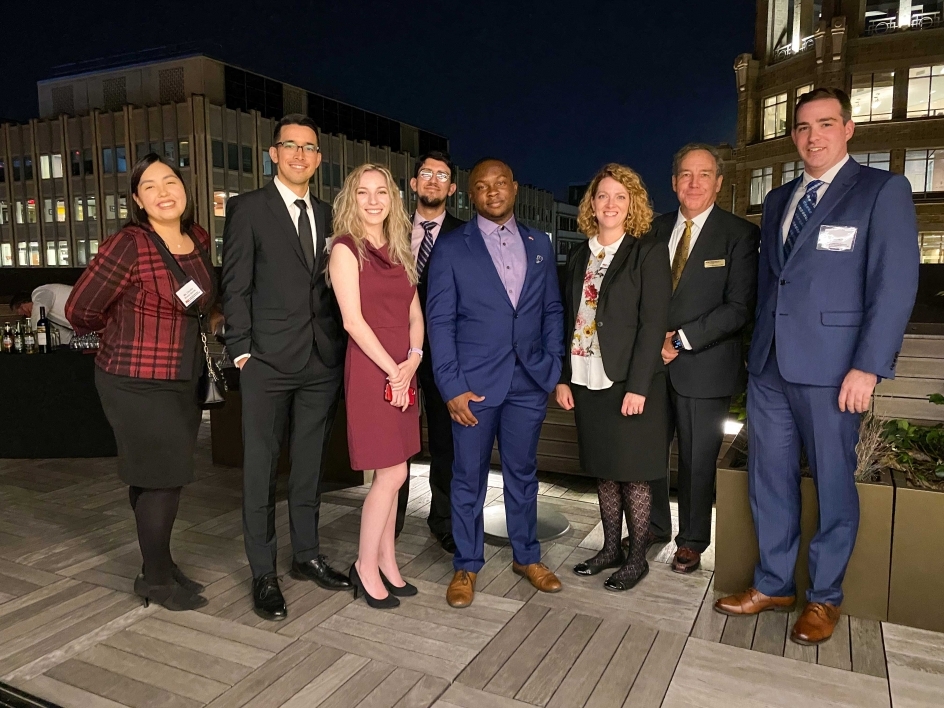 Students, including Simon Anthony Lee (center), during the reception, which included ASU alumni such as 2021 Pickering Fellows Claudia Rivera Garcia (left) and Cameron Vega (back center). 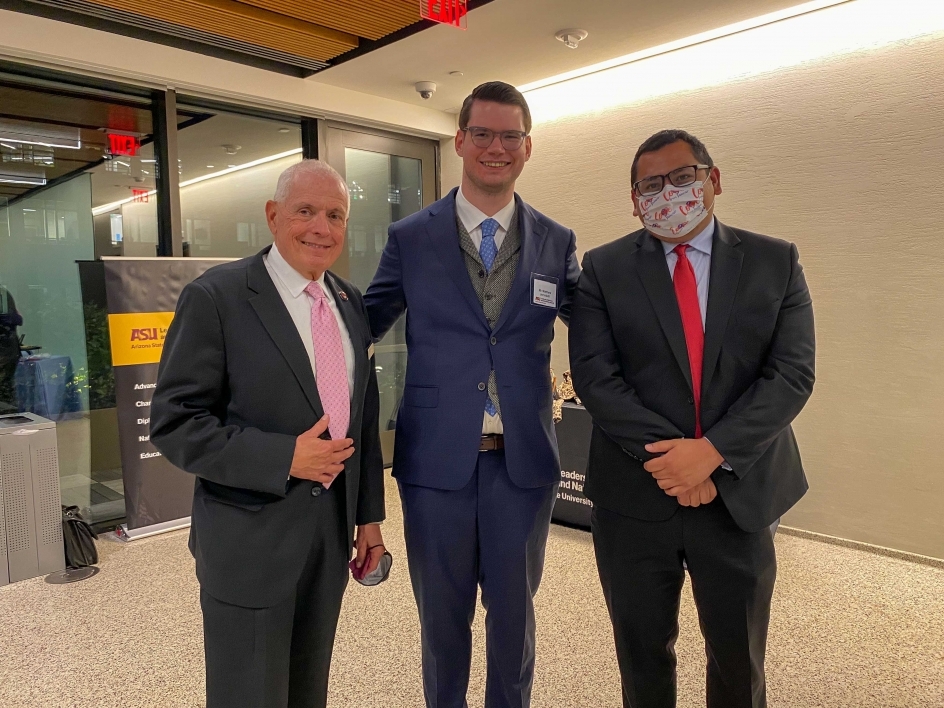 Program Director Ambassador Edward O’Donnell (left) with ASU political science alum and current Foreign Service Officer Matthew Jernstedt (center) and Daniel Ramirez (right), a student in the Online Master of Arts in International Affairs and Leadership program and a staff adviser to a member of Congress. 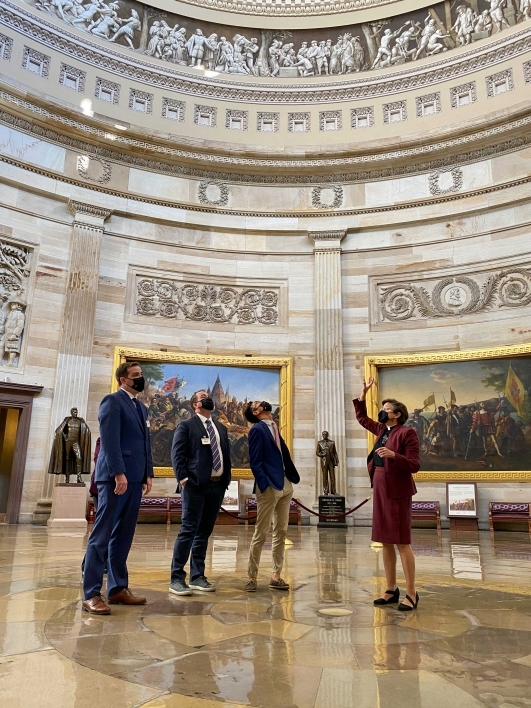 Four Arizona State University Department of Psychology graduate students have been named Sharon Manne Award Scholars, providing funding for personal research projects that address important and timely mental and physical health issues.Sharon Manne is currently a professor in the Department of Medicine at the Robert Wood Johnson School of Medicine and is the associate director of cancer prevention ...

Sharon Manne is currently a professor in the Department of Medicine at the Robert Wood Johnson School of Medicine and is the associate director of cancer prevention and control at the Rutgers Cancer Institute of New Jersey. She has committed to fund research proposals developed by ASU doctoral psychology students that allows them to conduct independent research projects, often outside the scope of what they are working on with their mentor. Manne was a doctoral student in ASU’s clinical psychology program and was mentored by Research Professor Irwin Sandler and former faculty member Alex Zautra.

Curci, a fifth-year psychology graduate student studying clinical psychology is part of the Las Madras Nuevas research project with professors Linda Luecken and Marisol Perez. This project is a longitudinal study on the socioemotional health of Mexican American mothers and families. The Sharon Manne funding will allow Curci to explore the role of the grandmother in the long-term development of the children and their mothers.

“Thanks to the Sharon Manne funding, I'll be able to recruit the maternal grandmothers of our sample, so we'll have three generations of data, which I'm really, really excited about,” Curci said.

“For example, disordered eating presents very differently among men compared to women, and might present differently among ethnic and racial minorities compared to Caucasian individuals where there's a lot of research already. Understanding the nuances of how these behaviors differ among these different groups can really inform prevention and prevention science going forward in the future.”

The Sharon Manne Funding is allowing her to take advanced statistical training to better understand mixed modeling and growth analysis, as well as paying for the software to run these analyses. This will complement the quantitative psychology training that she is currently receiving in the program and expand her capabilities.

Torres is a second-year doctoral student in the cognitive science training area who is mentored by Associate Professor Gene Brewer. She is part of the Memory and Attention Control Lab and conducts research on how people attend to and process information.

“My broad research focus is attention, specifically why it is that individuals vary in their ability to attend to tasks over long periods of time. Some people may be worse at it or better, and I'm interested in what contributes to those differences,” Torres said.

Currently, Torres is working in collaboration with professors Brewer, Samuel McClure, Daniel Peterson and Edward Ofori on an interdisciplinary project that is focused on understanding the effects of dopamine on attention in Parkinson’s disease patients. A common experience for Parkinson’s patients is the tendency to lose their balance and experience falls, often when they have divided attention.

“What we are trying to understand is whether the decrease in dopamine that occurs due to the disease has an effect on different cognitive abilities like attention,” Torres said.

Torres and her colleagues use fMRI to look at brain activity during these attention tasks and the additional funding will allow her to look at the structural integrity of the brains of people with Parkinson’s, specifically the pathways that are affected by disease progression. She hopes to evaluate performance on more cognitive tasks that measure memory and attention ability while also collecting additional data from more participants.

Rhodes is also a fifth-year doctoral candidate in the clinical psychology training area and conducts research under the mentorship of Sandler and Professor Sharlene Wolchik. Rhodes is part of the REACH Institute, a prevention centered research institute within the Department of Psychology, and conducts research with the New Beginnings Program.

Rhodes is interested in expanding access and improving accessibility in prevention programs like the New Beginnings Program and is modifying the delivery mechanism to a podcast format. With the Sharon Manne Funding, she will be able to run a pilot study to examine the preliminary efficacy of the new programming and to see if similar podcast-style interventions have a future in prevention science.

“I work on a parenting intervention called the New Beginnings Program, which is a program for divorcing families, and I'm working on adapting that program to a podcast format so that it can be free and accessible to any English speaking family anywhere in the world who has a smartphone,” Rhodes said. “What I'm really interested in is investigating a novel telehealth platform to determine does this work?”

She had already begun modifying the program and the additional funding will allow her to find out how users engage with the podcast and conduct focus group interviews with divorcing parents and clinicians to ensure the podcast teaches the skills that are relevant and useful to those families.

A sense of gratitude

“For me personally, I would definitely like to do what Dr. Sharon Manne is doing for us students. It is really humbling to even be here and to be able to contribute to knowledge and work with such amazing and supportive people, in a university that provides so many resources and is so attentive to our needs,” Torres said. “I have this kind of sense of obligation that I want to give back, and I want to continue to make science better — and part of doing that is contributing to us. That's what Dr. Sharon Manne is doing for us and we are all so grateful!”