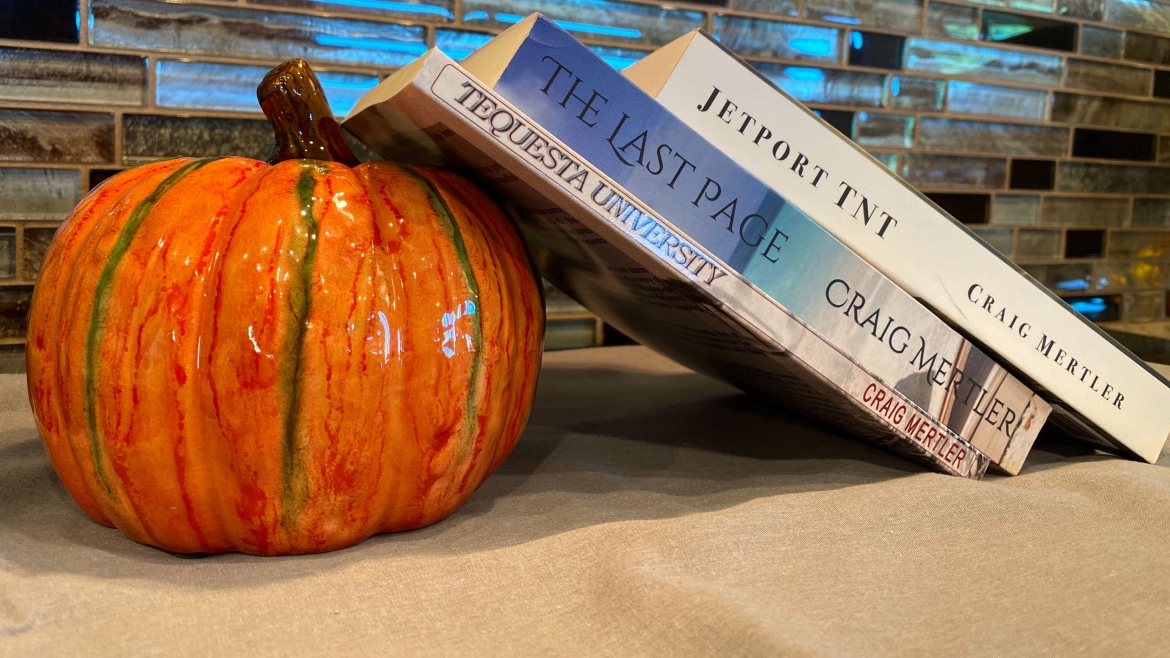 For many, Halloween is a time to have fun with costumes and haunted houses. For creatives, it can also be an inspiring time.

Is he trying to tell us something? Maybe or maybe not, but he certainly is entertained.

“Writing mystery novels is so much fun for me because I get to write about evil antagonists who are taken on by my heroic protagonists,” Mertler said. “It’s a huge creative escape for me.”

ASU News recently spoke to Mertler about his passion for writing, how Halloween inspires him and why murder mystery novels are his genre of choice. 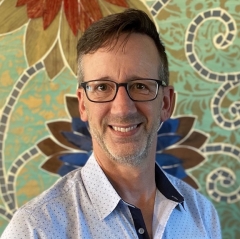 Question: Has Halloween ever influenced your work?

Answer: I would say absolutely yes. Halloween is a time to let loose and have fun. At the same time, Halloween is a creative celebration in a lot of ways. People get creative with costumes and decorating their homes. For me personally, it gives me an opportunity to think about the evil side or the horror side of Halloween. That provides a lot of inspiration for me in terms of creating some of the characters that I write about in my novels.

Q: How would you classify your fiction novels?

A: I would probably classify them as a combination of murder mystery and crime dramas. All of my novels have a murderous element to them. But the antagonists in the stories also are involved in a lot of other types of crime. That gives the protagonist of my novels, which is the same character in all three novels, the opportunity to really be creative in how he goes about either solving a crime or capturing the target of the investigation, so to speak.

Q: What is the occupation of your protagonist? Tell us about some of his characteristics.

A: He’s a retired police detective named Luis Tanner. The thing that I like about him most is that because he’s retired, he doesn’t necessarily have to play by all the rules in order for him to do some things that, if he were still active on the police force, he might not be able to get away with these days.

Q: So, after writing 10 textbooks, why and how did you get into fiction?

A: I think it’s a funny story because I’ve read a lot of fiction over the years. I'm very intrigued by crime drama, murder movies and limited-run drama series. I love how characters are built and how they develop over the course of a novel or series.

About four years ago, I had the idea that I wanted to try writing a novel, but the only writing I had done over the last 25 or so years was academic. I was really hesitant to venture into fiction because I had no formal training in creative writing or writing fiction. I wanted to try it to see if I could develop a plotline and carry it through from beginning to end.

So, I sat down to write my first novel in 2018. It’s a shorter novel, but I think I did a really good job of developing characters and then taking a story line from what I envisioned as the beginning to what I envisioned as being the logical end of that story line. It was so much fun to have that kind of creative outlet and do some writing that I hadn’t done before. Once I wrote the first one, I got bit by the bug and was excited to keep going forward. 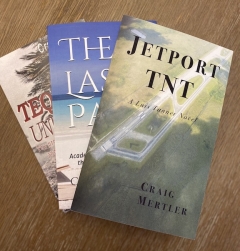 Q: Where does the inspiration for your novels come from?

A: I think it comes from a couple of places. I get basic ideas from other things that I read and see, but I also try to take things from current events, television and newspapers. Sometimes I read about real people who feel as if they could get away with murder, and those make great plotlines.

Secondly, all of my novels take place in Florida. One of the reasons for that is I used to live there and I know a lot of the geography. Also, if you notice, a lot of strange news comes out of Florida. The state is famous for people doing, let's say, creative and sometimes crazy things that you just don't see happening in other parts of the country. I might take something from what I hear or see and build or embellish on that and take it to a creative place.

Q: Can you describe your writing process for me?

A: I would say that there are some overlaps between my academic book writing and also my fiction writing. One of the overlaps is the fact that I like to plan everything out. So if I'm doing an academic book, I'll lay out every chapter before I sit down and write. If I'm working on a novel, I'll lay out the whole plot and list all of the things that I want to happen. Some of the stuff changes as I get deeper into the actual writing, but that's the starting point for me because I need to be able to envision where I plan to go. Maybe not necessarily where I end up, but where I'm hoping to go from the outset.

I feel I do my best writing when I can write a little bit every day because all of the plot and the characters, along with their idiosyncrasies, are all fresh in my head. If I, you know, try to write once every couple of weeks or once a month, I think I would lose a lot of that. I think I would not have the consistency in characters that I want and that I strive to have. Also built into that, I do a lot of research with respect to the locales or the settings of my novels, because I want them to be very accurate. If people live in those locales and they read my novels, I want them to say, “Oh yeah, I know this street” or “I know that restaurant” or whatever. I tend to be highly accurate in my novels because I want them to seem very realistic to the people who read them.

Q: What’s your favorite part of the writing process?

A: Over the course of my first three novels, I have really learned to love the value of dialogue between characters. In my first novel, I focused a lot on narrative. But a lot of can be revealed through character dialogue. For me that's fun because I try to envision sitting in a room with those two or three characters and listening in on their conversations, especially when one person knows something that the other person doesn't know. Or how people might talk around things that they don't want other people to know. It’s just human nature, part of conversing and dialogue.

Q: What are your plans for future novels?

A: I'm currently working on my fourth right now, but I’m at a roadblock because I have about three or four different directions that I think the plot could go. I'm trying to lay each one of them out before I make a decision about which way I want to go. So it’s in the early planning stages. I actually have numerous working titles, but the one that I'm leading towards is “Paradise is No Vacation.”

Barrett, The Honors College, at Arizona State University has announced that award-winning artist and activist Common will be the speaker for the 2021 Flinn Foundation Centennial Lecture.Titled “An Evening with Common,” the lecture, presented by Barrett Honors College, is scheduled for 7-8:15 p.m. Monday, Nov. 15, in the Arizona Ballroom at the ASU Memorial Union on the Tempe campus.The event i...

Barrett, The Honors College, at Arizona State University has announced that award-winning artist and activist Common will be the speaker for the 2021 Flinn Foundation Centennial Lecture.

Titled “An Evening with Common,” the lecture, presented by Barrett Honors College, is scheduled for 7-8:15 p.m. Monday, Nov. 15, in the Arizona Ballroom at the ASU Memorial Union on the Tempe campus. 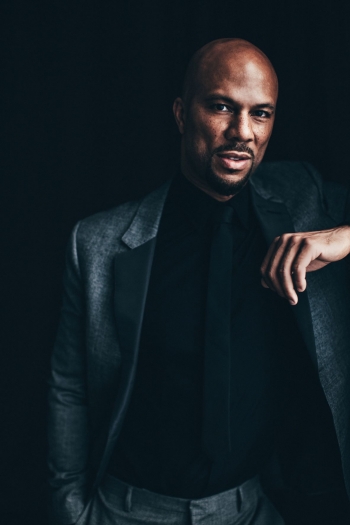 The event is free. Tickets are available here.

He is the author of a memoir, “One Day It’ll Make Sense,” released in 2011, and another book, “Let Love Have the Last Word,” released in 2019, in which he shares his personal stories of the people and experiences that have led to a greater understanding of love and all it has to offer.

Throughout his career, he has used his art as a platform to change people’s perspectives, promote more diverse narratives and encourage people toward positive movement. As a speaker, Common motivates audiences to nurture the dreams of the young, overcome adversity and address the persistent hope that lives within us all.

Compassionate, mindful and driven to inspire, Common reminds audiences that we all have a voice and we must speak out.

Common has performed on critically acclaimed studio albums, including his 11th album, “Black America Again,” and has written music for films. He also has acted in many movies, including “The Kitchen,” “The Hate You Give,” “Selma, “John Wick: Chapter 2” and “Megan Leavey.”

He has worked behind the scenes on several productions, including as executive producer for the Netflix drama “Burning Sands” and Showtime’s hit TV series “The Chi.”

Common has dedicated countless hours and has been deeply engaged in social justice and advocacy work around mass incarceration, mental health and voting.

After the success and impact of his Imagine Justice concert in 2017 and his Hope & Redemption Tour to eight prisons, Common decided to establish and launch Imagine Justice as a nonprofit in 2018. Centered at the intersection of art and activism, Imagine Justice in dedicated to leveraging the power of art to advocate for communities around the country, to fight for justice and equality, and to stand united against injustice wherever it appears.