This summer, the Critical Languages Institute held its 30th year of language classes.

Hosted by Arizona State University’s Melikian Center for Russian, Eurasian, and East European Studies, the institute provides affordable, college-level language courses in languages from East Europe and Eurasia. In 1991, the Critical Languages Institute began with a single Macedonian language class, and soon added Bosnian, Croatian, Serbian and other languages. Over the next 30 years, the institute grew into a large and vibrant community of language learners. 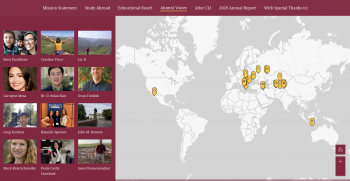 To celebrate the 30th anniversary of the Critical Languages Institute and its alumni achievements, ASU alumnus Nicholas Gayer built an interactive ArcGIS storymaps website. One map displays all of the institute’s study abroad locations, past and present, alongside alumni photographs and stories for each location. Another map follows students in their careers after leaving the institute. Download Full Image

Each of the summer courses offered by the institute are open not only to students from ASU and elsewhere, but also to non-students who are interested in the region. In 2020, students from countries as far-flung as the U.K., the Netherlands and India took classes in 13 languages: Albanian, Armenian, Bosnian/Croatian/Serbian, Hebrew, Indonesian, Kazakh, Macedonian, Persian, Polish, Russian, Turkish, Ukrainian and Uzbek. The classes provide the equivalent of a year’s worth of university language instruction condensed into one summer.

To celebrate the anniversary and alumni achievements, Nicholas Gayer, who graduated from Arizona State University with a bachelor’s degree in urban planning in 2019 and a master’s degree in geographic information systems in 2020, built an interactive ArcGIS storymaps website.

The website features interactive maps that illustrate the experience and impact of the institute. One map displays all of the institute’s study abroad locations, past and present, alongside interactive alumni photographs and stories for each location. Another map follows students in their careers after leaving the institute.

Today, alumni of the institute work around the world, leveraging their language and study abroad experiences. Many former students have gone on to win prestigious fellowships and scholarships such as the Fulbright Fellowship or the Charles B. Rangel International Fellowship. Some have returned to Phoenix, including the Melikian Center’s current director, Keith Brown, who is an alumnus of the institute and a professor at ASU’s School of Politics and Global Studies.

For Evan Tieslink, who took Uzbek at the institute in 2010 and 2013, the institute was a formative academic and professional experience.

“The Critical Languages Institute did a great thing in choosing teachers that felt more like peers or friends than a traditional professor,” Tieslink said.

“While working in Washington, D.C., my data team was almost entirely composed of people from outside the U.S. (Sudan, Gambia, Vietnam, Wales, India and Ethiopia, among others), and it was never a struggle for me to build friendships and understanding with them. Learning difficult languages, the institute rewired my brain a bit and made me more comfortable and accepting of people with different languages, religions, cultures and ways of thinking than myself,” he said. “No matter what you end up doing after your university experience, this is one of the most important skills you can have throughout your professional career.”

Tyler Gobble, who graduated from Arizona State University and Barrett, The Honors College, with a degree in aerospace engineering in 2017, took Turkish with the Critical Languages Institute in 2018 and used the experience to pivot to an international relations master’s program. He graduated from Georgetown University with a master’s degree in foreign service in 2021.

“The Critical Languages Institute prepared me because it taught not just language but also culture, about people and what matters to them. It facilitated my transition to graduate school,” Gobble said. “I was nervous because I majored in aerospace engineering, because of my undergrad experience, and I was in a room with colleagues with work experience in international relations already, some of whom even worked for the foreign service. The institute made me feel more ready.”

In line with ASU’s institutional commitment to being accessible to the surrounding community, the institute does not charge tuition but rather an administrative flat fee of $1,500 for its Tempe-based programs. It also offers a limited number of first-come, first-served need-based scholarships for low-income and Pell-eligible applicants.

“It’s important to us that language study is accessible to all students, especially those who could not envision themselves taking a language like Ukrainian or Kazakh, let alone study abroad," said Irina Levin, director of the institute. "Our goal is to make language learning, especially for less popular languages, something that students of all backgrounds see as open to them. The Critical Languages Institute is one of the only places in the U.S. that teaches some of our languages for college credit, making us an essential resource for students and scholars of Eurasia and Central Asia in particular.”

Looking forward to 2022, the Critical Languages Institute is adding a 14th language: Tatar.