Arizona State University alumna Tatum James has a busy year ahead of her, from an internship in Washington, D.C., to a teaching assistantship in North Macedonia. It’s all a part of her plan to become a foreign service officer working abroad as a diplomat representing the United States.

Her journey began when academic success coordinator Alan Beaudrie visited her high school Spanish classroom to promote ASU’s School of International Letters and Cultures. Such visits are an important part of the school's recruitment efforts, which seek to encourage prospective students to continue studying the languages they began learning in high school. 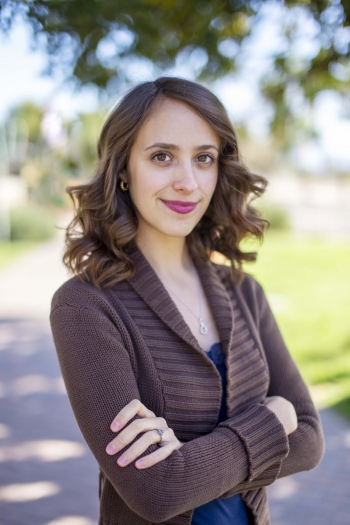 First-generation college student Tatum James graduated in May 2020 with two bachelor’s degrees in global studies and Spanish with a concentration in linguistics. She recently earned a Fulbright English Teaching Assistantship and a Rangel Graduate Fellowship. Download Full Image

“High school students are often told to look toward the ‘safe’ degrees,” Beaudrie said, noting that humanities degrees actually offer students the ability to apply their skills in a wide variety of career fields. “But it’s hard to stand out that way when looking at graduate school or a job after graduation.”

When James enrolled in the Spanish program at ASU, Beaudrie became a mentor to her. He advised her on which classes would best fit her interests and helped her craft her applications for the prestigious postgraduate opportunities she would later be awarded.

“He has been there from the beginning,” she said.

James first grew interested in working for the U.S. Foreign Service while she was studying abroad as a Benjamin A. Gilman Scholar in Barcelona, Spain. Immediately, she said, she knew it was the right career path for her.

“Being a diplomat is a career where I can serve my country, help make the world a better place, learn foreign languages, and travel the world!” James said.

She graduated from ASU in May 2020 with two bachelor’s degrees in global studies and Spanish, with a concentration in linguistics. A first-generation college student, James supported her studies with awards such as the Quino E. Martinez Scholarship, as well as by running her own photography business.

Edurne Beltrán de Heredia, a PhD candidate in Spanish and a graduate teaching associate, taught one of James’s Spanish classes and saw her passion and work ethic firsthand.

“Tatum was always ready to understand how learning a language can help her achieve many goals in her professional life,” Beltrán said. “She was always interested in seeing the world as a place that she could further discover by learning Spanish.”

While enrolled at ASU, James remained heavily involved both on campus and in the community. She taught English to international students as part of ASU Global Launch and completed an honors thesis through the Critical Languages Institute at the Melikian Center. She also served as a Virtual Student Federal Service intern for the U.S. Department of State, preparing Albanian high school students to enroll in college in the United States, and completed an internship with Phoenix Sister Cities as the assistant to the president and CEO.

“Tatum is a great example of how our motivated students can build an extraordinary resume that helps them stand out above most other college graduates,” Beaudrie said. “She has the skill and ability that is hard to find in someone so young.”

That resume is what led James to being awarded both a Fulbright English Teaching Assistantship and a Charles B. Rangel International Affairs Graduate Fellowship.

She will spend the summer interning on Capitol Hill as a Rangel Fellow, learning about how Congress shapes foreign policy. Then she’ll travel to North Macedonia to teach English to students at the State University of Tetovo for a year as part of the Fulbright program.

The following summer, James will complete an internship at a U.S. embassy in the country of her choice before enrolling in a master’s degree program. The Rangel fellowship will cover her tuition and living expenses for the duration of her graduate studies at the university of her choice. If all goes according to plan, James will be sworn into the U.S. Foreign Service as a foreign service officer in spring 2024.

“I will continue a lifelong career of serving American interests and citizens abroad while engaging in cultural exchange within my host communities and hopefully helping to make the world a better place,” she said.

It is incredibly rare for a student to be awarded both these fellowships. The Fulbright program only awarded assistantships in North Macedonia to two people for this coming school year, James said, and the Rangel fellowship is only awarded to 45 students out of more than 1,000 applicants.

“Seeing Tatum earning all these accomplishments is proof that we are preparing students to get many achievements after their graduation, and it is also a proof that learning a language is an open door to a whole new world of possibilities out there,” Beltrán said.

James credits her time in the School of International Letters and Cultures and the School of Politics and Global Studies for fostering her curiosity about the diverse cultures in the world around her.

“I learned so much about embracing other cultures and perspectives,” she said. “I came from what felt like a really small town, so being around such multiculturalism completely opened my mind and challenged my preexisting beliefs.”

The Melikian Center: Russian, Eurasian and East European Studies , Center on the Future of War , The College of Liberal Arts and Sciences , School of Politics and Global Studies