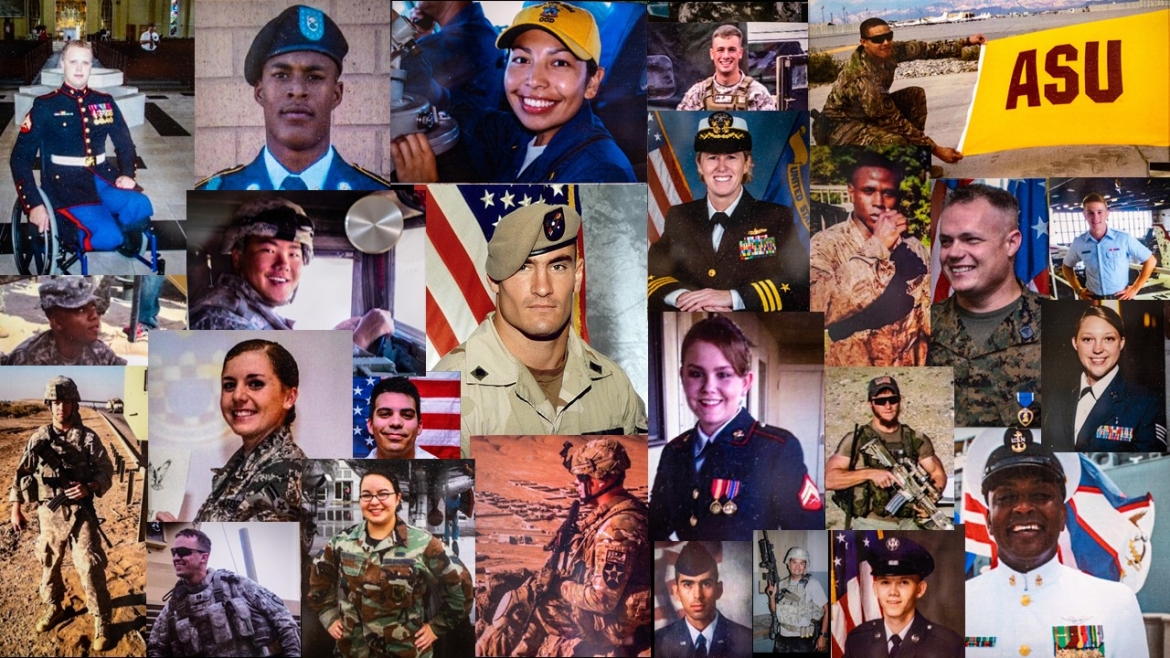 Inspired to serve: Sun Devils who answered the call after 9/11

The Sept. 11, 2001, terrorist attacks against the World Trade Center twin towers in New York City and the Pentagon in Washington, D.C., prompted countless Americans into action, including many Arizona State University Sun Devils who went on to serve the nation in various ways.

Alumnus Pat Tillman is one of the most recognizable figures to be inspired into military service following 9/11, sacrificing a promising NFL career to join the U.S. Army.

Tillman arrived at Army boot camp in the summer of 2002, subsequently graduated from grueling Ranger school and went on to serve two tours in Iraq before being killed by friendly fire in eastern Afghanistan during a firefight in April 2004. He was 27.

Despite Tillman's untimely passing, his legacy of service, principles and passion for excellence live on.

“Twenty years ago Pat Tillman was inspired to serve after 9/11, and 10 years ago we were inspired by him,” said Michelle Loposky, ASU Pat Tillman Veterans Center director of student success and partnerships. “Having Pat Tillman’s name associated with our veterans center is an absolute privilege.”

The Pat Tillman Veterans Center celebrated its 10th anniversary Aug. 16. Since its 2011 inception, the center has helped veterans make the difficult transition to academic life, and in turn veterans have earned over 10,750 degrees to date.

“From the many stories I’ve heard from those who knew Pat, he was a guy who welcomed challenges and challenged others,” said Loposky, who is an Army veteran. “Through challenge there is growth, and through growth individuals create the better version of themselves.

“The hope is that our student veterans see their potential and strive for their own greatness.”

“Natural leaders who push from the front and lead by their own personal example are a rarity,” said Guimarin, a former Air Force colonel and commander. “For that reason, they should be put in the spotlight, to be a beacon for others.

“We are better as a society when we objectively look at figures from our past and live by the lessons they put before us.”

Although Tillman may have been the best-known Sun Devil to answer the call after 9/11, others did so as well and vividly recall their memories of that day and their service.

Anthony Wende, a lecturer with the Ira A. Fulton Schools of Engineering aviation program on the Polytechnic campus, was already an Air Force senior noncommissioned officer during 9/11. Stationed halfway around the world in Osan Air Base, South Korea, Wende was an aircraft maintenance superintendent responsible for keeping a fleet of 24 A-10 Thunderbolt II fighter jets war-ready in the event of a North Korean invasion.  9/11 turned Wende’s perspective upside down on what it meant to be on the war front.

“We were pissed,” Wende said. “Fifty miles from the demilitarized zone, we thought we were the ‘tip of the spear,’ only to find out the homeland was being attacked.”

Soon after the second tower was struck and without knowing the culprits, the teams at Osan prepared for combat. Wende directed his crews to move jets into their hardened shelters for protection while keeping them launch-ready.

“I had the aircraft stripped of training munitions, and basically directed everyone to go into wartime mode,” Wende said. “Days later, we were officially on wartime footing. Combat aircraft were loaded for bear, with live munitions.”

Wende already had 16 years of service on 9/11. He stayed in the service longer than his original career plan because of the attacks. 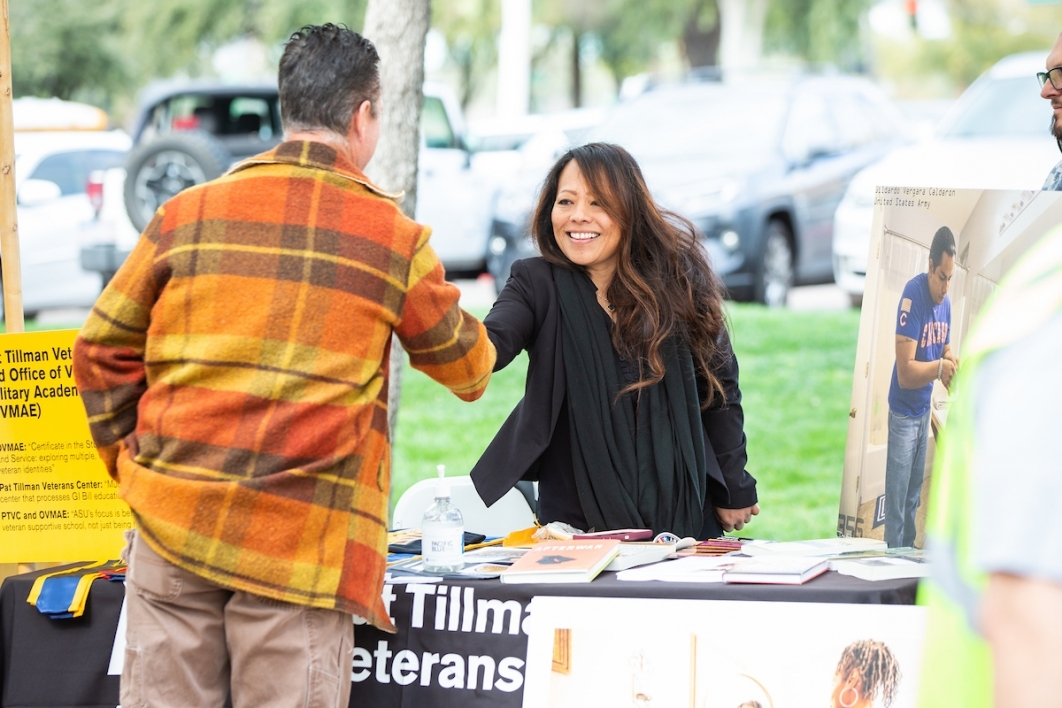 Army veteran Michelle Loposky, Pat Tillman Veterans Center director of student success and partnerships, chats with Warde Nicholes during the annual ASU Day at the Capitol at the Wesley Bolin Plaza in Phoenix on Feb. 11, 2020. Master Sgt. Anthony Wende poses with an A-10 Thunderbolt II attack aircraft at Osan Air Base, South Korea, in 2001. Wende was a maintenance superintendent for a fleet of A-10s at Osan AB during the 9/11 attacks. He is now a lecturer with the university's aviation program at the Polytechnic campus. 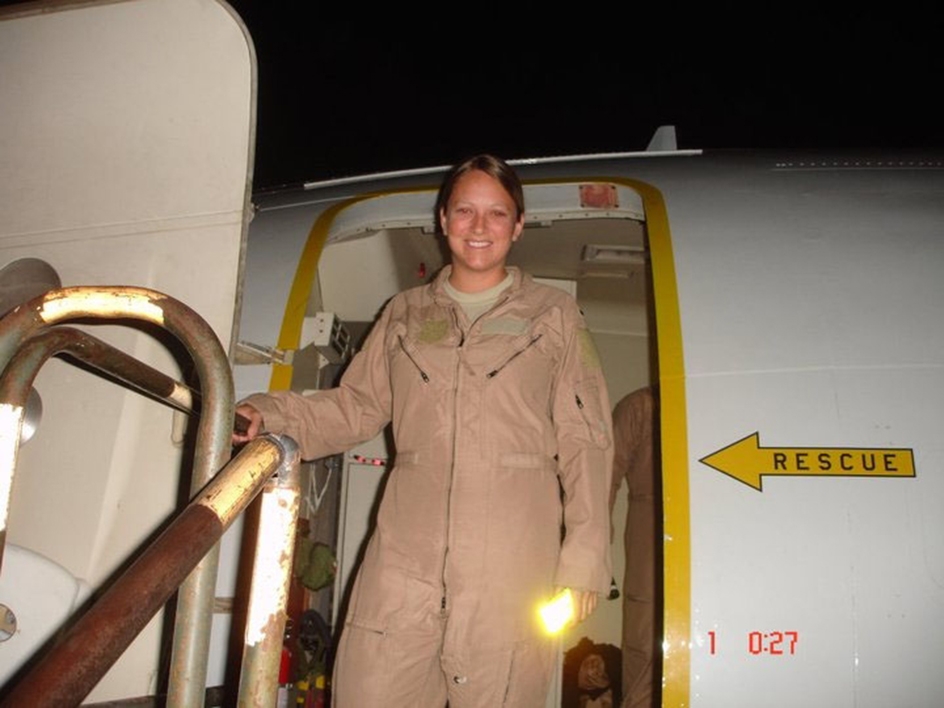 1st Lt. Alicia Ellis steps out of an E-8C Joint Surveillance Target Attack Radar System aircraft somewhere in the Middle East after her last combat mission in the Air Force. Ellis served as an air battle manager and was inspired to join the military after 9/11. She is now a lecturer with The College of Liberal Arts and Sciences' School of Politics and Global Studies.

“I was going to get out at 20 years to pursue working on aircraft on the civilian side,” Wende said. “But after 9/11 I felt like I would be a traitor if I left, because our country was still under attack. So I stuck around.”

On that day, but nearly 7,000 miles away from South Korea was Alicia Ellis, a high school senior in Fort Worth, Texas. Ellis had no connection to the military, nor was it something she had ever considered. After seeing the second airliner strike the second tower live on TV from her first-period classroom, that changed.

“We were watching the smoke, watching them (reporters) talk, and then the second one hit,” said Ellis, who immediately suspected war was imminent. “I think that was the first time the idea came into my head, ‘I might join the military.’ I think by the end of that day, I had it in my head that that was what I was going to do.”

Ellis, now a lecturer in ASU’s School of Politics and Global Studies, stayed with her original plan to attend college. But soon after graduating, she applied to Air Force Officer Training School. It was a lengthy process, but Ellis was accepted, succeeded in all her training and finally reported to her first military assignment at Robins Air Force Base, Georgia, in 2008. At Robins, she served as an air battle manager aboard the E-8C Joint Surveillance Target Attack Radar System aircraft, better known as the Joint STARS.

Joint STARS is an intelligence-gathering aircraft, widely used during the global war on terrorism launched after 9/11. The platform provides ground forces and commanders information to disrupt, delay or destroy enemy forces. Ellis’ duties included rapidly coordinating and relaying critical information via radio to units conducting combat missions on the ground.

“I thought the air battle manager position sounded so interesting,” Ellis said. “And I was good at it … to be that kind of communication hub and keep everything organized and figured out … I really liked it.”

Ellis spent most of her four-year Air Force career deploying to and from the Middle East, supporting combat operations in both Iraq and Afghanistan with Joint STARS.

Like Tillman, 9/11 inspired Ellis to serve. Personally, she felt a “duty to protect.” The attacks also changed her view on America’s vulnerability. She acknowledges that perhaps she saw life as a kid then, with a sense that Americans lived in a safe, powerful place that was untouchable by outsiders.

“Then after 9/11 that just wasn’t true anymore,” Ellis said. “It was like there was a cushion from the outside world that got popped.”

Looking back at her service and in light of the recent collapse of the U.S.-backed government in Afghanistan, where the global war on terrorism began 20 years ago, Ellis gives her perspective and encourages veterans to stand tall.

“I still have a lot of friends who are in (the service) and some of them were there (in Afghanistan) until a few days ago, and some of them are struggling,” Ellis said. “I think I did the right thing for the right reasons, and so does every veteran I know.

“You did your job and you should be proud of it.”

Like Wende, Guimarin was already in uniform during the attacks. Within two weeks of the towers collapsing, he found himself saying goodbye to his family and boarding a military transport headed to Oman. There, he helped establish a forward operating base to support military operations in the region.

Looking back, Guimarin believes there are lessons to be learned from 9/11 and from Tillman.

“The events of 9/11 impacted my life, both personally and professionally for years in its aftermath,” Guimarin said. “I think it’s important that the American people consider the whole picture of what happened and how we reacted to best understand the moral fabric of our society.

“Pat is the shining example of what is best in us. We should never forget that and ensure his legacy, along with others who sallied forth at that time to do what we knew was right.”

The Arizona State University Alumni Association is proud to welcome 27 Sun Devil alumni to the ASU Leadership Institute. Class 4 of the leadership development program is composed of up-and-coming and current leaders representing a variety of industries including education, nonprofit, marketing, construction and health care.This nine-month program immerses participants in the university’s culture...

The Arizona State University Alumni Association is proud to welcome 27 Sun Devil alumni to the ASU Leadership Institute. Class 4 of the leadership development program is composed of up-and-coming and current leaders representing a variety of industries including education, nonprofit, marketing, construction and health care.

This nine-month program immerses participants in the university’s culture with behind-the-scenes tours, presentations from renowned ASU professors and leaders, and experiences to broaden the perspectives on critical issues facing our region. The program continues to grow with participants from out of state willing to travel on a monthly basis to experience the leadership program and connect back to their alma mater. This year, four of the participants will travel from California, Texas and Maine for the monthly Innovation Days. 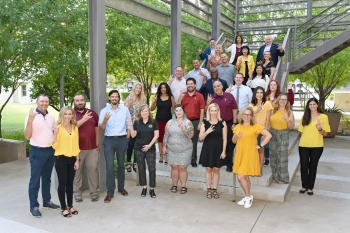 “During Class 4’s orientation day, we had each participant introduce themselves and explain why they applied for the Leadership Institute,” said Christine K. Wilkinson, ASU Alumni Association president and CEO. “There were three responses that were repeated among the group – to grow as a leader; to reconnect with the university and learn how ASU continues to innovate; and to make a difference in their community. I am looking forward to working with this devoted group of Sun Devil alumni develop their skill set and become champions for ASU.”

The members of ASU Leadership Institute Class 4 are: