“Embrace” has already been named one of the best albums of 2021 (so far) in Phoenix New Times and has been shared as part of the best experimental music on Bandcamp. 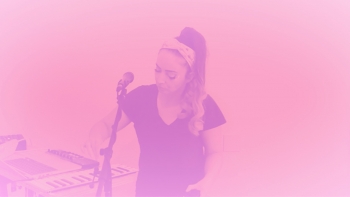 Hayes builds, teaches and performs with hybrid analog/digital instruments from her own creation. Throughout her career, she has musically improvised and performed in several major electronic music festivals such as Moogfest (USA) and Norberg (Sweden) using handcrafted instruments that she has created through coding and engineering. She said she incorporates all her experience into the classroom.

“I teach interdisciplinary improvisation in a class that is taken by students who are not only involved with sound and music, but also dance, visual arts, game design, engineering and more,” Hayes said. “I teach technical skills such as coding but from the perspective of really getting ‘under the hood’: being able to solve your own problems and think strategically. From my extensive experience performing with electronics on stage, having this kind of knowledge  is really crucial because it enables you to remain calm and be able to think quickly on the spot on the rare occasion that things break.”

Outside the classroom, Hayes enjoys continuing to translate what she learns from performing and teaching into sound art. She released “Embrace” in early February 2021 and it’s on track to take off in the sound art world. The album includes four tracks of improvised sound art using Max/MSP, a visual programming language, and very little editing in a digital audio workstation. All instruments used on the songs are a combination of drum machines, analog synths, voice processor, controllers and the software that Hayes has been building since early 2007.

It is Hayes’ ability to sculpt and meld music in real-time that has set her apart and allows her to create brand new experiences for each listener. This ability has paved the way for her to continue performing her works live. Since the album release, she has been featured in Wire Magazine’s June edition, voted best artist of the month in April by Huddersfield Contemporary Music Festival (hcmf//) and invited back by hcmf// to participate in their music festival.

The Institute for Humanities Research at Arizona State University has selected “That Most Precious Merchandise: The Mediterranean Trade in Black Sea Slaves: 1260-1500” by Hannah Barker as the 2021 book award winner.“The committee agreed that this book was uniquely worthy of receiving an award because of its meticulous research, keen analysis and timely relevance in the modern era,” said L...

The Institute for Humanities Research at Arizona State University has selected “That Most Precious Merchandise: The Mediterranean Trade in Black Sea Slaves: 1260-1500” by Hannah Barker as the 2021 book award winner.

“The committee agreed that this book was uniquely worthy of receiving an award because of its meticulous research, keen analysis and timely relevance in the modern era,” said Leslie Alexander, institute advisory board member and associate professor at the School of Historical, Philosophical and Religious Studies and School of Social Transformation. 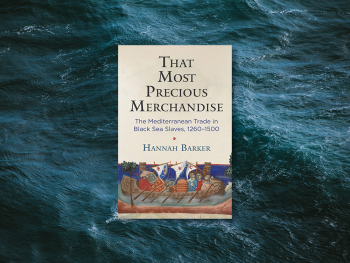 Barker, an assistant professor at the School of Histsorical, Philosophical and Religious Studies, is a historian of slavery and the slave trade in the late medieval Mediterranean and Black Sea. “That Most Precious Merchandise,” her first book, examines the processes of shipping, marketing and purchasing slaves from 1260 to 1500 and the Genoese, Mamluk and Venetian merchants who conducted this trade.

“Barker challenges us to shed our modern understandings about slavery, and to understand enslavement in the medieval period on its own terms,” Alexander said.

The book offers several comparisons between slavery in the Black Sea and other slave trades throughout history. For example, religious identity in the Mediterranean slave trade functioned as a fixed determinant of status, much like race in the Americas. Additionally, although women in both systems were subjected to sexual and reproductive labor, children born to women who were enslaved in the medieval Mediterranean were treated as family members and heirs to their masters, not new capital to fuel the slave industry.

“Ultimately, ‘That Most Precious Merchandise’ not only helps readers understand the specificity of slavery in the Mediterranean, but also urges us to think deeply about unfreedom across space and time,” Alexander said.

Barker hopes her book will serve as an example of how cultures and systems have changed over the centuries.

“I want readers to realize that the way we live now is not and has never been inevitable. At various moments in the past, individuals and groups of people have decided, consciously or unconsciously, to let go of or change certain things, to the point that we now are no longer aware that those things previously existed,” she said.

“To me, this is a hopeful perspective because it emphasizes that change is always possible. On one hand, the example of the Black Sea slave trade shows how deeply embedded systemic oppression is in our history. On the other hand, the fact that it has been so completely forgotten highlights the many changes that lie behind the present consensus that slavery is an absolute moral wrong. That consensus and the processes by which it emerged should not be taken for granted as we consider how to respond to other types of systemic oppression.”

In addition to Barker’s winning book, the advisory board selected four shortlisted titles:

The institute’s book award celebrates outstanding writers whose contributions to the humanities change the conversation by fostering new directions for their discipline. Every other year, this award is open exclusively to nonfiction publications of humanities-based scholarship by ASU faculty.

“I take this award as encouragement that medieval historians can make useful contributions to broader interdisciplinary conversations about power, labor and intersectionality,” Barker said.

“Precisely because the Middle Ages is not the first period that comes to mind when we think about slavery, medieval historians have insights to share about the wide and sometimes surprising range of functions that slavery has performed over the course of time around the globe, as well as their implications for both medieval and modern societies.”

Barker will be recognized and offer a lecture on her book at the Book Award and Author Reception, on Oct. 5. Registrants may attend either in person or virtually.