The Sun Devils will travel to the Bay Area to face No. 6 Stanford on Friday and California on Sunday.

Diversity, inclusion in the world of prestigious fellowships focus of ASU-hosted discussions

The Lorraine W. Frank Office of National Scholarships Advisement (ONSA) at Arizona State University is coordinating a series of events in March to promote discussions about diversity and inclusion in the world of prestigious fellowships, in particular the Marshall, Rhodes, and Gates Cambridge Scholarships for graduate study in the United Kingdom.“Over its 118-year history, the Rhodes Scholarship...

Diversity, inclusion in the world of prestigious fellowships focus of ASU-hosted discussions

The Lorraine W. Frank Office of National Scholarships Advisement (ONSA) at Arizona State University is coordinating a series of events in March to promote discussions about diversity and inclusion in the world of prestigious fellowships, in particular the Marshall, Rhodes, and Gates Cambridge Scholarships for graduate study in the United Kingdom.

“Over its 118-year history, the Rhodes Scholarship has had some dire problems with diversity and inclusion,” said Kyle Mox, associate dean for national scholarships advisement at Barrett, The Honors College at ASU and director of ONSA. “For example, it did not accept women until 1977, and until recently, even scholars selected from majority-Black constituencies, such as South Africa or the Caribbean were white. 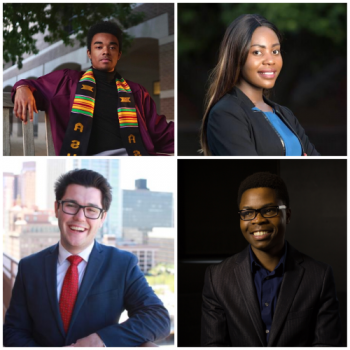 “In recent years, however, these elite fellowship programs have attempted to recover from this history and become more inclusive. And ASU recipients are a prime example of that turn towards inclusion."

Mox noted that diversity and inclusion is not just about race or nationality. “It’s remarkable that ASU students have been winning these fellowships so consistently, considering that the bulk of the awards go to highly selective private universities and Ivy League schools,” Mox said.

“Even more remarkable is that our recipients have been students who have historically been underrepresented in these programs, including first-generation students, students of color, or even women in STEM fields. We think it’s worth critically engaging with the realities of the competition for these selective awards and for admission to ‘elite’ universities,” he said.

“This event will be special because the alumni reached out to us directly to ask if we would like to host it,” Mox said. “Our incredible track record with diversity and inclusion in our applicant pool has drawn some attention, and many people would like to see that continue. I hope this conversation will help ASU students who don’t see themselves as ‘fancy fellowship’ material to understand that anyone can become a Marshall Scholar.”

The second event, on March 17, will feature several ASU alumni and will focus on Oxford University and the Rhodes Scholarship, with a special emphasis on the “Rhodes Must Fall” controversy.

“Over the past several years, protests to remove his (Cecil J. Rhodes) name and likeness from the buildings at Oxford have gained strength — it’s not unlike the recent movements to tear down monuments to Confederate leaders in the United States,” Mox said. “I think the ethical complexities surrounding historical trauma, exclusion and reparations are worth examining.”

Confirmed for the event are ASU Rhodes scholars Mugwisi and Marekera, ASU Marshall Scholar Frank Smith, who attended Oxford, and Marshall Scholar-elect Sojourney, who is an active civil rights advocate and will be studying at Oxford.

Both events are open to all ASU students and alumni, but juniors and seniors who are considering postgraduate fellowships are especially invited to attend.

“It isn’t our intention to turn off anyone to these programs,” Mox said. “Instead, we hope to promote the sort of critical discourse surrounding the ideas of ‘success’ and ‘inclusion’ that ASU is known for promoting. I’m really looking forward to it.”

Following these discussions, virtual information sessions on the application processes for these and other postgraduate awards in the United Kingdom and Ireland will take place on March 18 and 19. Register for all events online.