A new mineral has been named for Arizona State University Emeritus Regents Professor Carleton Moore, the founding director of ASU’s Center for Meteorite Studies. The mineral, named “carletonmooreite,” was found in a large, rare type of meteorite that fell in February 1948 in Norton County, Kansas.

School of Earth and Space Exploration Research Professor Laurence Garvie was recently analyzing a sample of the Norton County meteorite and found a mineral that had not been seen before. From there, he set about getting the new mineral approved by the International Mineralogical Association (IMA) and named for Moore. 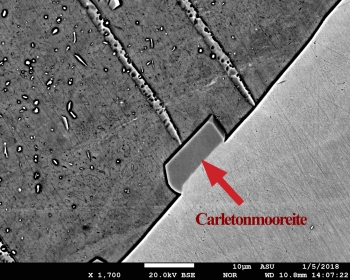 A backscattered electron image (using an electron microscope) of a euhedral carletonmooreite crystal in a Norton County, Kansas, metal nodule. This image shows a very small area of a polished and acid-etched section of one of the metal nodules. For scale, the whole width of the image is about the same width as a human hair. Image by Laurence Garvie/ASU Download Full Image

Garvie is the lead author of a recent study on carletonmooreite to be published in American Mineralogist with ASU co-authors Soumya Ray, who is a graduate student; research scientist Axel Wittmann; and Professor Meenakshi Wadhwa, along with Chi Ma of the California Institute of Technology and Kenneth Domanik of the University of Arizona.

“It is a rare type of meteorite made up primarily of a white mineral called enstatite but with an interesting batch of very much smaller dark minerals in it,” explains Moore. “I appreciate it being named after me, and all the credit goes to Laurence Garvie for making this happen. I get my full name on it because there are other Moores out there.”

“We discovered this mineral purely by serendipity,” said Garvie. “We were studying elemental maps of a metal nodule from the Norton County aubrite and noticed small grains dominated by nickel and silicon. Importantly, the grains lacked phosphorus and there are no described minerals with just nickel and silicon, so we knew we had something new.”

To have a new mineral species approved, Garvie and the co-authors first compiled a report of the mineral’s composition, structure and other particulars. He then sent the report to the IMA for review. From there, an international committee reviewed the proposal and ultimately decided the data warranted a new mineral species.

In this case, carletonmooreite was approved as the 68th new mineral submission in 2018 by the IMA, and Garvie suggested that it be named after the founding director of ASU’s Center for Meteorite Studies.

“Every new mineral, however tiny and rare, helps to uncover the rich tapestry of nature,” said Garvie. “Each mineral is a snapshot of the very specific conditions under which it formed, and when nature presents us with a new mineral, it is our job is to be smart enough to figure out what it's telling us.”

Moore is an emeritus Regents Professor at ASU’s School of Earth and Space Exploration and School of Molecular Sciences. He earned his PhD at the California Institute of Technology in 1960 and was editor of the journal Meteoritics for 20 years. Notably, he was a member of the Lunar Sample Preliminary Examination Team for the Apollo program and a principal investigator for the returned lunar sample program for all the Apollo missions. Asteroid 5046 “carletonmoore” is also named after Moore.

Moore joins several other ASU faculty who have minerals named for them, including Don Burt (burtite), Peter Buseck (buseckite), and Alexandra Navrotsky (navrotskyite), as well as Hongwu Xu (xuite), who will join the School of Molecular Sciences in 2022.

Burtite is named after School of Earth and Space Exploration Professor Don Burt, who is an authority on mineral equilibria in skarn and greisen deposits.

The mineral was discovered by Philippe Sonnet, who was a graduate student studying tin skarn deposits at El Hamman, Morocco, for his PhD thesis. The mineral has a powdery nature and is extremely rare in rocks (only two occurrences are known in the world to date). It is not uncommon, however, as the whitish corrosion product of various tin-bearing alloys like bronze and in the presence of hard (calcium-rich) water, such as that in Arizona. 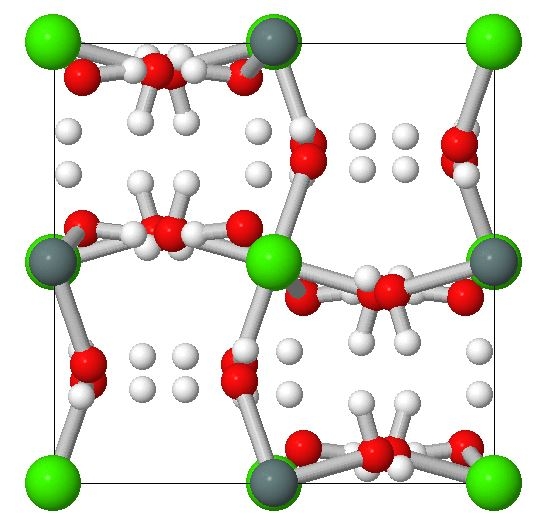 “I was once informed of a new hotel in Las Vegas where a tin-bearing solder was used as the low-melting alloy for the automatic sprinkler system that was supposed to melt in case of a fire,” said Burt. “Corrosion by hard water caused the sprinklers in nearly every room to start dripping simultaneously. The whitish corrosion product was X-ray identified as burtite, and I got a call from one of the many liability lawyers involved in the case, who wouldn't tell me the name of the hotel.”

In 2012 the mineral buseckite was named after Regents Professor Peter Buseck "for his many contributions to mineralogy, meteorite research and transmission electron microscopy," obtained over many decades of research.

Buseck, who is professor in both the School of Molecular Sciences and the School of Earth and Space Exploration, is widely known for his research in solid-state geochemistry and mineralogy, cosmochemistry, as well as atmospheric geochemistry. 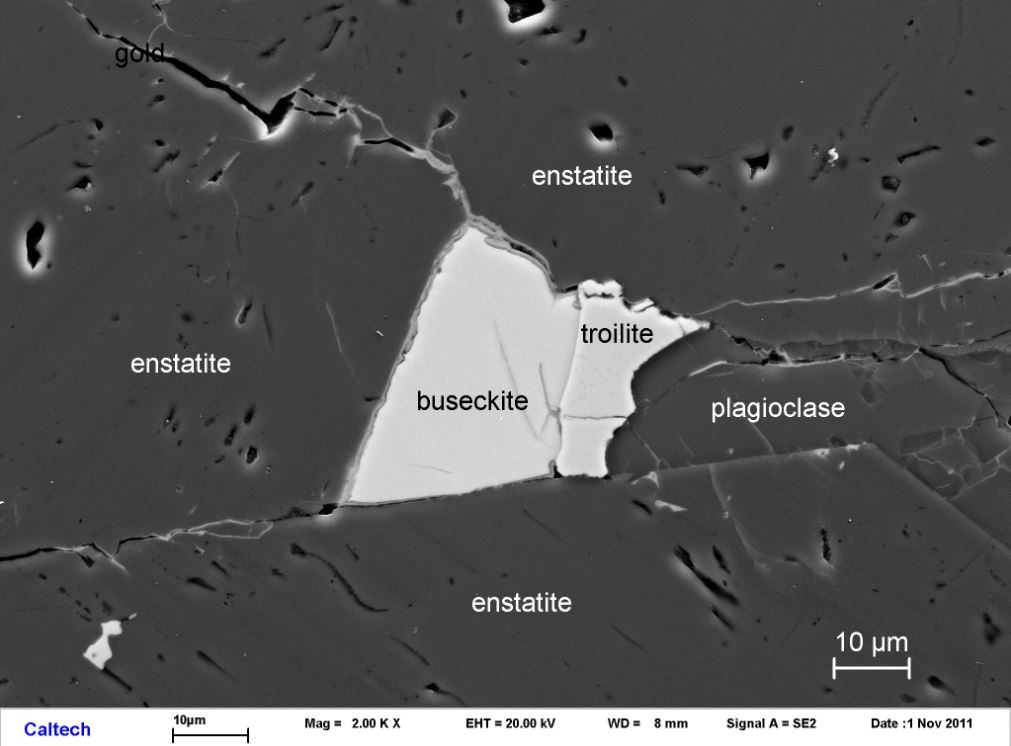 Buseck and his group pioneered the use of transmission electron microscopy to study minerals, meteorites and aerosol particles at close to the atomic scale. Buseckite is the iron dominant analog of wurtzite, a new member of the wurtzite group discovered in the Zakłodzie meteorite.

In 2019 a newly discovered mineral, navrotskyite, was named after ASU Professor Alexandra Navrotsky for her significant contributions to uranium thermochemistry.

Navrotsky is a professor in the School of Molecular Sciences in The College of Liberal Arts and Sciences and in the School for Engineering of Matter, Transport and Energy in the Ira A. Fulton Schools of Engineering, as well as affiliate faculty in the School of Earth and Space Exploration. She leads the Navrotsky Eyring Center for Materials of the Universe.

Navrotsky is a distinguished physical chemist whose research interests relate microscopic features of structure and bonding to macroscopic thermodynamic behavior in minerals, ceramics and other complex materials. 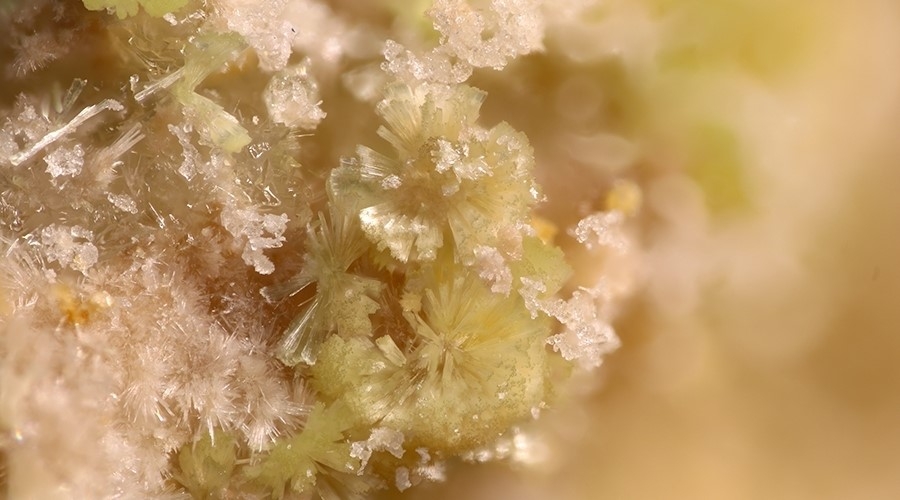 "My group and I have worked on the thermodynamics of uranium minerals for many years, so although navrotskyite is new, we know its cousins,” Navrotsky said at the time. “Getting a mineral named after you means that people like both your science and you, and I am deeply honored by this.”

The mineral was discovered in the Blue Lizard mine in Red Canyon in southeastern Utah.

After leaving ASU in 1985 for Princeton University, Navrotsky officially returned on Oct. 1, 2019, as a member of the National Academy of Sciences and the recipient of many other honors.

The mineral “xuite” was recently named after Hongwu Xu, a Los Alamos National Lab (LANL) Earth System Observations scientist, and his University of Wisconsin collaborator Huifang Xu. Hongwu Xu will join ASU as full professor in the School of Molecular Sciences in January 2022.

Xuite was initially discovered in Idaho as part of a reddish-brown scoria specimen from the Menan Volcanic Complex. The reddish glass on the scoria surface contains the new mineral. More recently, xuite was identified in a second location — naturally combusted coal beds in Gillette, Wyoming.

The newly named mineral, xuite, is shown here magnified in images A and B. The reddish area contains the xuite, hematite and silica-rich glass. Credit: Los Alamos National Laboratory

Xu’s research involves the structural characterization and thermodynamic measurements of natural minerals and synthetic materials, enabling determination of their structure-stability relationships at relevant pressure/temperature conditions. The systems he has studied include oxides, hydroxides, silicates, titanates, niobates, sulfates, and gas hydrates, with a wide range of Earth, energy and environmental applications.

Xu will be involved in the development of the Navrotsky Eyring Center for Materials of the Universe.

This story was written with contributions from Jenny Green of the School of Molecular Sciences.

Researchers at the Biodesign Swette Center for Environmental Biotechnology (BSCEB) and their colleagues have been awarded the 2021 Rudolph Hering Medal from the American Society of Civil Engineers. The prestigious award recognizes the best paper of the preceding year from the Journal of Environmental Engineering. The research selected for the Hering Medal describes new approaches to one of the ...

Researchers at the Biodesign Swette Center for Environmental Biotechnology (BSCEB) and their colleagues have been awarded the 2021 Rudolph Hering Medal from the American Society of Civil Engineers. The prestigious award recognizes the best paper of the preceding year from the Journal of Environmental Engineering.

The research selected for the Hering Medal describes new approaches to one of the thornier issues surrounding environmental contamination: how to rid ecosystems of a stubborn, pervasive and dangerous chlorinated chemical known as trichloroethene, or TCE. 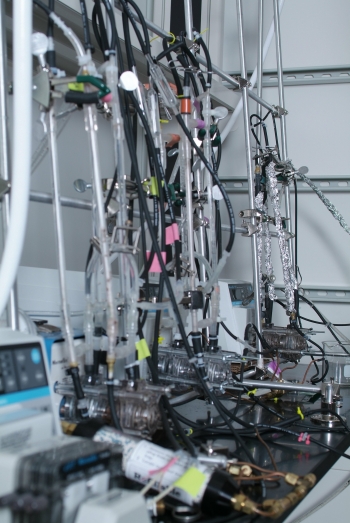 A membrane biofilm reactor is a device used in environmental biotechnology research. It uses the activity of specialized microbes to transform toxic chemicals into benign end products. Download Full Image

The paper presents the first mathematical model simulating a complex series of chemical interactions in which specialized bacteria reduce harmful TCE to benign end products. The model was then tested using a bench-scale device known as a membrane biofilm reactor in which the successful decontamination of TCE was carried out.

The winning paper was written by Bruce Rittmann, director of the BSCEB; Rosa Krajmalnik-Brown, director of the newly formed Biodesign Center for Health Through Microbiomes; Chen Zhou, assistant research professor in the BSCEB; Yihao Luo, an environmental engineering PhD student in BSCEB and ASU’s Ira A. Fulton Schools of Engineering; as well as Boya Wang and Youneng Tang, both now at Florida State University.

The Rudolph Hering Medal is awarded annually. It was instituted and endowed in 1924 by the Sanitary Engineering Division (now the Environmental and Water Resources Institute) of the American Society of Civil Engineers, in honor of Rudolph Hering, a past vice president of the society. Hering (1847–1923) is widely considered the founder of the field of modern environmental biotechnology. 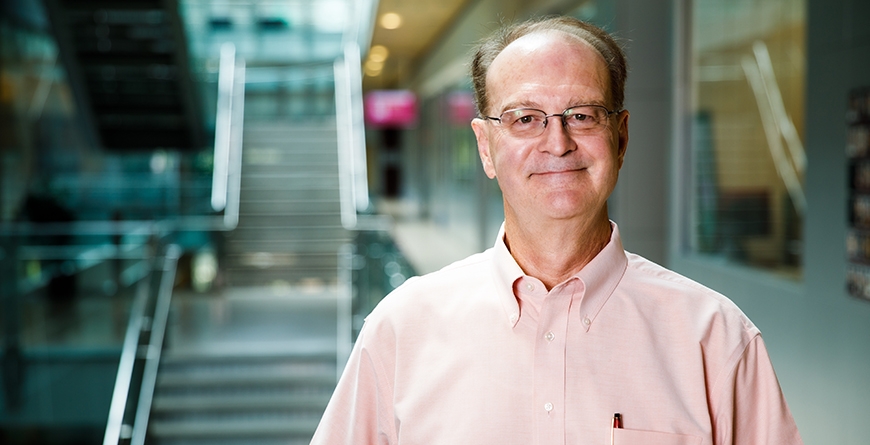 Bruce Rittmann is the director of the Biodesign Swette Center for Environmental Biotechnology. Rosa Krajmalnik-Brown is the director of the Biodesign Center for Health through Microbiomes. 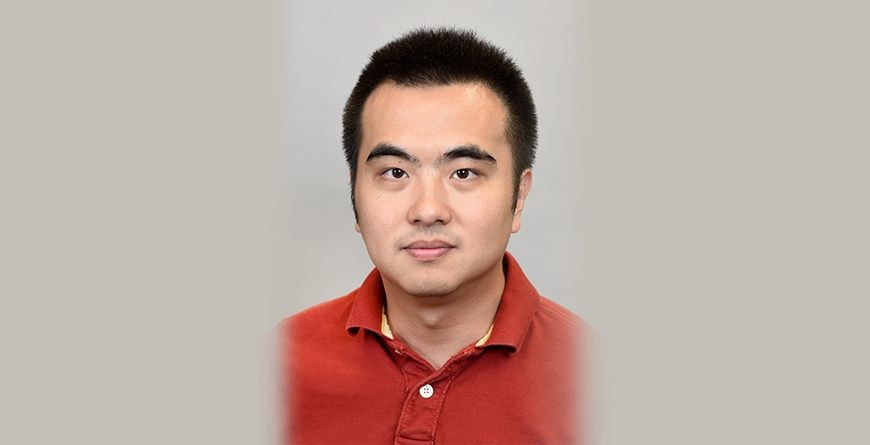 Chen Zhou is an assistant research professor in the Biodesign Swette Center for Environmental Biotechnology. 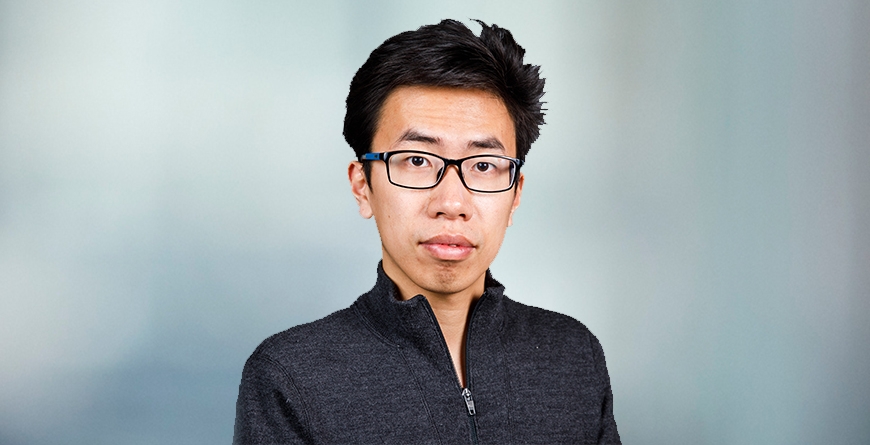 Yihao Luo is a doctoral student in environmental engineering in the Biodesign Swette Center for Environmental Biotechnology and the Ira A. Fulton Schools of Engineering at ASU. 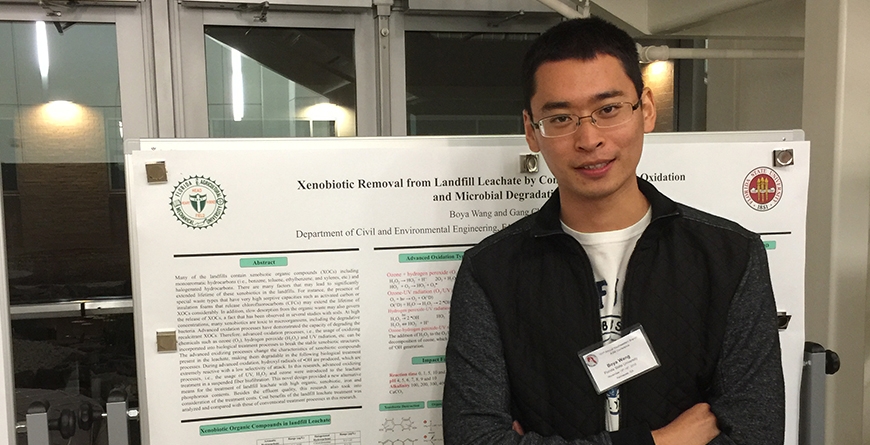 Boya Wang is a researcher at Florida State University. 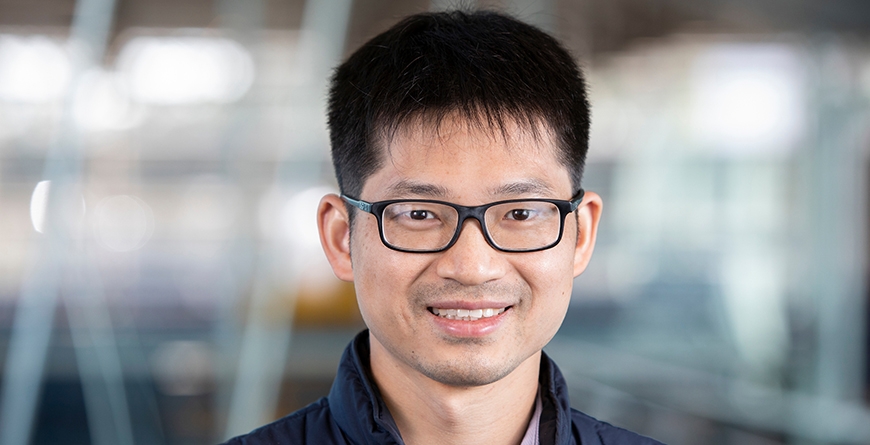 Youneng Tang is a researcher at Florida State University.