It is at the confluence of different experiences that new theories come into being. Writing in this week’s “Perspectives” in the journal Science, Arizona State University researchers Kim Hill and Rob Boyd comment on new science analyzing human behavior in traditional societies and advocate for a new fully integrated evolutionary theory of human behavior.

A collaboration of these two particular researchers is not unexpected but reflects how the practical and theoretical combine to create new ideas. Hill has spent most of the last 30 years in the jungles of South and Central America, South Africa and the Philippines, living and working with Indigenous hunter-gatherer communities to understand the unique aspects of our own species. Boyd is a forerunner in the field of cultural evolution, focusing on the evolutionary psychology of the mechanisms that give rise to — and influence — human culture, and how these mechanisms interact with population dynamic processes to shape human cultural variation. 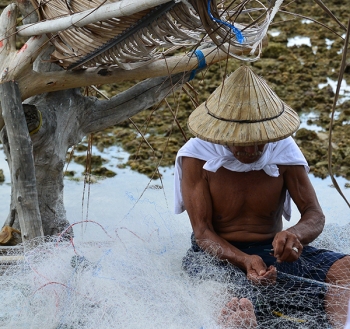 They are two of 17 scientists with the Institute of Human Origins who work on the cutting edge of evolutionary science to provide a better understanding of “how humans became human” and how and why we are in some ways so different from all other life forms on the planet. Both researchers are professors with the School of Human Evolution and Social Change.

In their commentary, Hill and Boyd support an analysis of 339 hunter-gatherer societies that shows that “not only are hunter-gatherers behaviorally similar in similar ecologies, but even mammals and birds in those ecologies tend to exhibit the same behavioral regularities as do human populations,” validating the evolutionary perspective called “human behavioral ecology.”

However, shifting to a new paradigm that began in the 1980s, they add that social learning, cultural history, and cultural evolution are also important prime determinants of human behavioral variation. Humans cooperate more than any other primate. Because of the role of cultural cooperation, our species has seen spectacular ecological success.

Hill and Boyd also cite Institute of Human Origins researchers Sarah Mathew and Charles Perreault’s recent paper on the causes of variations among 172 North American Native American communities that found that “the effect of cultural history seems to persist for hundreds or even thousands of years.”

Together, Hill and Boyd see a need to synthesize both adaptive behavioral ecology and cultural evolution approaches into a singular, integrated evolutionary approach to understanding human behavioral variation.

They state that “culture and genes are linked in a tight coevolutionary embrace, and this leads to complex patterns of genetic and cultural coadaptation.”

Hill and Boyd hope that these recent studies, their observations and new research currently being done will help elucidate the complex nature of human behavior and why explanations of human behavioral patterns will not simply be extensions of animal behavior models.

Commentary published in Science, "Behavioral convergence in humans and animals," by Kim Hill and Rob Boyd.

Measuring a lifespan of learning

Human adaptation is a unique combination of maturing and learning slowly from childhood to adulthood, the development of complex production skills and the establishment of cooperative sociality. A new study published in Science Advances provides powerful empirical confirmation that the human hunting skill-production curve for male hunters from around the world — one essential skill that calls u...

Measuring a lifespan of learning

Human adaptation is a unique combination of maturing and learning slowly from childhood to adulthood, the development of complex production skills and the establishment of cooperative sociality.

A new study published in Science Advances provides powerful empirical confirmation that the human hunting skill-production curve for male hunters from around the world — one essential skill that calls upon all human adaptation faculties — is universal and important for understanding how humans became a “special” animal. 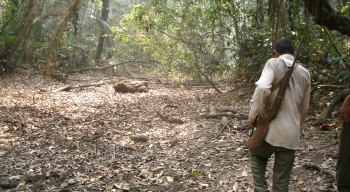 The research is the result of collaborators using large, geographically and culturally diverse data on modern hunter-gatherer communities from 40 study sites around the world. Arizona State University researchers involved in the study include Kim Hill, with his long-term research on the Ache in Paraguay, and Ben Trumble’s fieldwork with the Tsimane in Bolivia. Hill is a research associate with the Institute of Human Origins and professor in the School of Human Evolution and Social Change. Trumble is an assistant professor with the School of Human Evolution and Social Change and the Center for Evolution and Medicine. 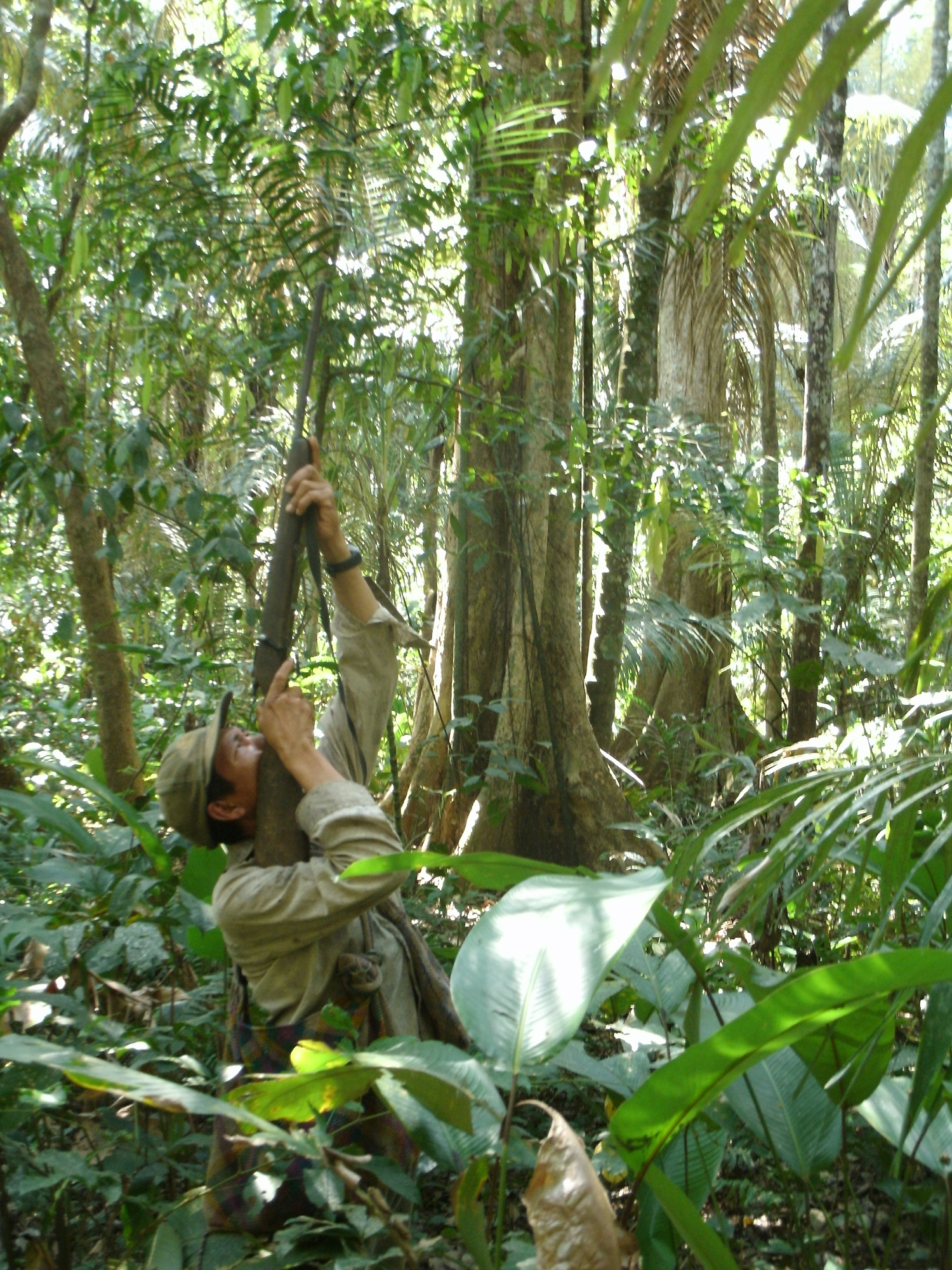 Tsimane hunter in the Bolivian Amazon. Image by Benjamin Trumble.

All traditional societies that were part of the data from 23,000 hunting records of 1,800 individuals show very low hunting productivity in childhood and mid-teen years, followed by a steep increase until middle age (30 to 50), and then a slow decline until the mid-60s. While there is some cross cultural and interindividual variation (mainly in peak age and rate of decline in older ages), the pattern appears to be a universal feature of the human hunting niche. Other empirical studies have also suggested a similar pattern for plant collection by women and even a similar age-specific income curve from modern industrial states like the United States.

This study is important because it helps clarify the adaptive “socioeconomic” niche of humans. It shows that a unique resource acquisition pattern had already emerged in small-scale hunter-gatherer societies and has been retained to the present. This pattern emerged when our ancestors began to use their big brains and cultural adaptations, or tools and techniques, to become predator specialists on complex prey and high-quality plant resources.

In short, children produce little to no food resources, teens begin a steep learning curve and final skill development doesn’t peak until middle age. This is dissimilar to any other known mammal where most individuals are able to meet their own food/resource needs efficiently soon after weaning. The human niche, on the other hand is about learning and development of skills (human capital) that ultimately lead to high productivity in the final one-third of the lifespan.

“In order to effectively hunt, you need to know the behavioral patterns of dozens of prey species, what time of day they sleep, what their tracks look like, what calls they make and what those calls mean. It is not just about how fast you can run, or how steady you are with a bow,” said Trumble.

“For 99% of human history, we lived as hunter-gatherers,” said Trumble. “In the U.S., we can drive to a fast-food restaurant and pick up 2,000 calories, but that is not been the case throughout human history. With the Tsimane in the Bolivian Amazon, the average hunt lasts nearly nine hours and covers more than 11 miles. Even then food isn’t guaranteed, only around two-thirds of hunters return with meat.”

The pattern shows that ancestral human foraging societies faced a life trajectory similar to modern Americans, with young adult hunters, mainly developing skills that later lead to high resource production rates in middle age. This also means that juveniles are totally dependent on adults for resources while they dedicate their time to learning. Much like today's college students, young adults in hunting societies are still mainly learning rather than bringing in high income. And, like in today’s world, middle age and older adults are the workhorses of society that subsidize younger individuals who are learning skills and cultural traits.

“Humans are in a very unique adaptive niche that we might call the 'learning niche,'" said Hill. “For many years of our lives we produce little and dedicate our time to learning. Then as we grow older we use that knowledge to produce high levels of resources that can subsidize the next generation of young learners. This leads to the unique human social system of intergenerational dependency throughout the lifespan.”