The Psyche Mission team, led by Arizona State University, encountered an interesting challenge this spring, as college campuses closed around the country due to COVID-19. The mission’s Psyche Inspired program had a team of undergraduate students creating works of art inspired by the mission, but were now without access to their on-campus studios or workspaces and without physical exhibit areas to share their art with the community.

Undeterred, however, some students brought their projects off campus and continued to work on them from home, while others changed their project to be something that could be completed digitally or with more commonly available materials. 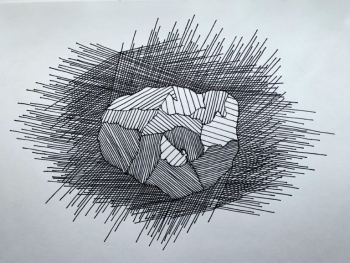 "Psyche 16" in pen and ink by Psyche Inspired intern Chase Mortensen, a computer science major at Utah State University. According to the artist, this piece emphasizes the rays of light surrounding the asteroid and the many different angles from which the asteroid will be observed and analyzed. Download Full Image

Another adjustment the team made due to campus closures was to move the year-end artist’s showcase, which had previously been a hybrid of online and physical exhibits on the ASU campus, to a completely online format.

For this to be successful, the team created a completely immersive experience for the public, including a 3D virtual gallery from Artsteps and a mobile app, developed by ASU undergraduate student Jennifer Breunig. Through these platforms, visitors can experience the artworks of each student as if they were walking through a gallery, reading about each artist and a description of their work.

The mission’s virtual showcase webpage also highlights the artworks and includes video interviews of students discussing their experiences in the program and art they created on each of their individual profile pages. 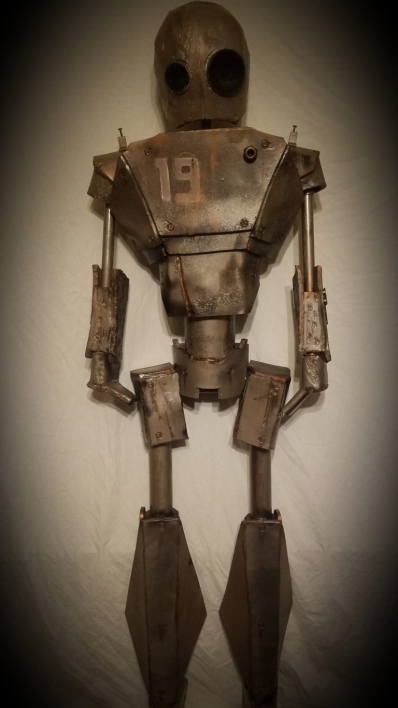 "Psyche Bot Model - 19" made from PVC pipe, EVA foam and cardboard by Psyche Inspired intern William Strunk, a civil engineering major at The Citadel. The robot’s plating is designed to resemble the surface of an asteroid, which shows damage and erosion from time and collisions with other objects. 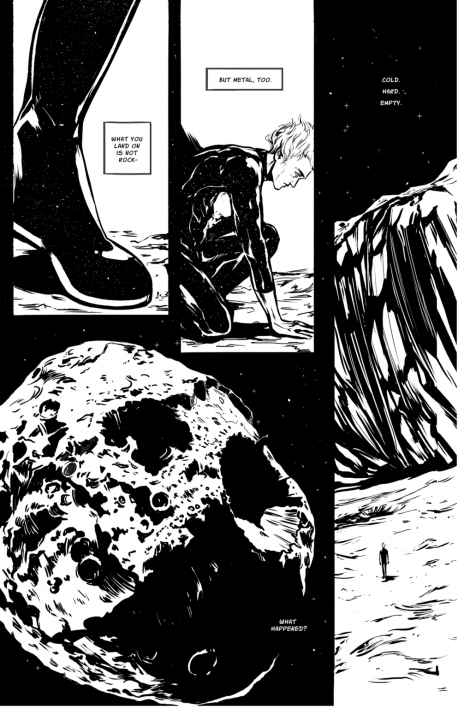 "Psyche Comic" by Psyche Inspired intern Sarah Tennant, an illustration and creative writing major at the Kansas City Art Institute. In this piece, Tennant wanted to explore Psyche’s history and its terrain and generate the same feeling of awe she felt when hearing Psyche’s story of being an asteroid that may be the core of an early planet. 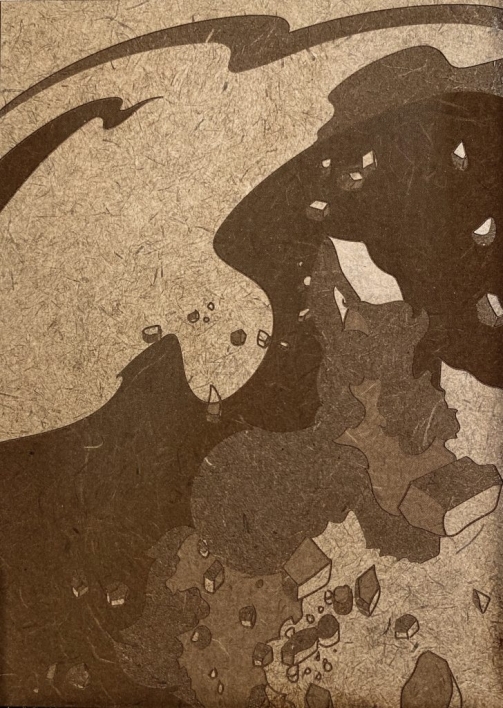 "Light Curves" in wire and yarn by Psyche Inspired intern Levi Keatts who is an undergraduate at Virginia Commonwealth University. This piece was inspired by a scientific paper on Psyche about the inversion of light curves to develop a topo map of Psyche.

“Even our artists, who, though they had never met in person, had seen each other’s work all year, found the online showcase to be an exciting culmination of the group’s efforts,” said Psyche Inspired program lead and mission co-investigator Cassie Bowman.

Psyche Inspired selects 16 students each year from a national pool of applicants. This year’s interns, known as the “Cobalt Class,” includes students from 13 different universities nationwide (this year the class included three students from ASU) and a variety of disciplines. All students worked together remotely, meeting weekly via video conferencing to learn about the mission and share ideas and inspiration. These talented individuals created over 60 artworks about the NASA Psyche Mission, with mediums ranging from digital art to dance.

“People sometimes don’t think that art and science go together,” said Binh-An Nguyen, a Psyche Inspired intern who is a chemistry major and art minor at Temple University. “As someone who really wants to go into a future career field that involves art and science, I think it’s great for them to realize how integral they are to each other and also see how the two of them together can create something wonderful.”

Fellow intern Monica Moreno, a jewelry and metalworking major at Pasadena City College agrees. “For some reason, I believed that art had no place in a field like (space exploration), but a lot of the people working on this mission are artistic and use their creativity and artistic skills in more ways than one to do their jobs,” she said.

Undergraduates in the program also found value in working with interns with different backgrounds and majors. “There’s an importance in having people who view things from other perspectives and who have different specializations than you, and this is a strength and a benefit,” said Psyche Inspired intern Fiona Schneider, a graphic design major at University of Florida. “It allows you to learn so much more than sticking to working with like-minded crowds.” Intern Joyce Tsui, an art major at the University of California Santa Barbara, agrees: “I truly felt close to everyone on this team, even though we were miles and miles apart.”

How to apply for the Psyche Inspired program

The Psyche Inspired application for 2020-21 will go live later this summer, in late June or early July. Psyche Inspired is open to all talented, creative full-time enrolled undergraduate students at universities and community colleges in the United States or its territories, regardless of major.

Psyche Inspired artist Noah Keime, a biology and studio art major at Creighton University, is a big proponent of the program and encourages other undergraduates to apply. “Always try out for something, even if you don’t think you’ll get it,” he said. “You should really shoot above what you think you can get because you never know what’s going to happen.”

Ral Vandenhoudt, a biology and economics major at Emory University, echoes that sentiment. “If there is an opportunity, why not try taking it?” he said. “See where that road leads, even if you have very little idea of what's actually along it. That leap of faith really did pay off."

And for enthusiasts who are not undergraduates, but would like to share their works of art inspired by Psyche, the mission team created the #PsycheSpaceCRAFTY program, which provides an opportunity for everyone to submit their inspired creations to the mission team.

About the Psyche Mission

This article was written by Psyche Mission intern, Kaxandra Nessi

TEMPE - Head Coach Graham Winkworth and the Sun Devil Soccer team announced five signees to the roster for 2020 competition. The Sun Devils continue to build a team touted with diverse backgrounds as the signees hail from five different countries, including Germany, Slovenia, New Zealand, England, and the United States. ... TEMPE - Head Coach Graham Winkworth and the Sun Devil Soccer team announced five signees to the roster for 2020 competition. The Sun Devils continue to build a team touted with diverse backgrounds as the signees hail from five different countries, including Germany, Slovenia, New Zealand, England, and the United States.