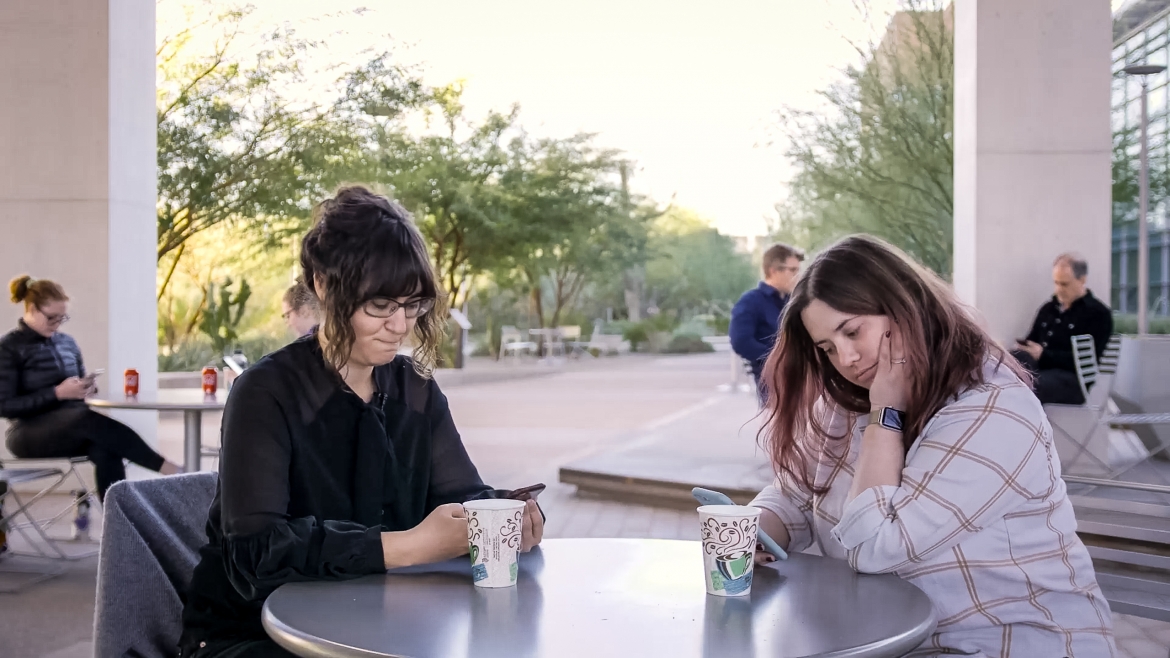 Before the threat of the novel coronavirus sent us all home to shelter in place this spring, limiting our face-to-face interactions to just a few members of our immediate household (if we were that lucky), it seemed to many that humans as a species had begun to take for granted the myriad opportunities for in-person connection in favor of scrolling through social media and other entertainment via our smartphones.

ASU Associate Professor of psychology Athena Aktipis wanted to know if there was a way to get people to put down their phones and engage with the environment around them and the person sitting next to them. In a paper on the subject, Aktipis and colleagues explore the classic coordination problem from game theory: the stag hunt game.

According to the theory, individuals can either choose to work by themselves, hunting small game like rabbits, or they can choose to work together and potentially garner a larger payoff in the form of a stag. In this modern manifestation of the stag hunt game, scrolling through social media instead of engaging with people physically near you is like choosing to hunt rabbits on your own.

“We call it scrolling for metaphorical rabbits,” Aktipis said. “Essentially, with a stag hunt game, you can only get the bigger payoffs if you coordinate.”

This problem and ways to solve it, including developing an app that allows social contacts to opt in to a coordinated technology blackout, is discussed in the article by Aktipis and her collaborators, Roger Whitaker of Cardiff University in Wales, and ASU psychology graduate student Jessica Ayers.

ASU Now spoke with Aktipis about the study’s findings, revealing advice that is useful both for those who are eager to get back to socializing in person (hopefully at a safe distance and while wearing a mask), as well as those who are choosing to take it slow but might need some help setting aside their smartphone to have a real conversation with members of their quaran-team.

Question: If, in this modern manifestation of the stag hunt game dilemma, the smaller reward is the satisfaction you feel from scrolling through social media, what is the bigger reward of putting down your phone and engaging in face-to-face conversation?

Answer: This is something that is somewhat subjective, and I’ve had some interesting conversations with people about this. The minority would rather be on their phone than talking with their friend or spouse sitting next to them. But I think for a lot of us, having that very human interaction where we make eye contact, listen to each other’s voices, see each other’s facial expressions and are able to understand each other in a more nuanced way is something that really helps us to feel more human and more connected and supported in whatever it is that we’re experiencing. And if we just go with the safe option of being on our devices, we miss out on that.

Q: As a solution, you and your colleagues suggest an app that would allow social contacts to opt in to a coordinated technology blackout. Tell me more about that.

A: We’re working on developing that now. But I think right now, given the current situation, maybe there’s a unique chance to look at how it would work in smaller-scale situations, because people aren’t interacting with hundreds of people a day anymore; they’re interacting with their roommates or their families or the cashiers at grocery stores.

Q: Has the pandemic made you rethink any of the aspects of your study?

A: It’s kind of an exciting time, despite it being really a huge challenge for all of us as a society. But I think that there are certain parts of the changes that we’re undergoing that we’ll be able to actually take as an opportunity to reflect on what we value and how we want to live our lives intentionally in relation to other people and what role we want social media and smart devices to be playing in our social lives. Especially since that role is expanding now with the need to social distance. There are lots of benefits to being able to utilize technology for our social interaction. What we need to think about now is how much of it do we want to be scrolling through feeds versus having real conversations.

Q: As technology advances, we’re not just getting pings from our phones; we’re getting a buzz on our wrist or a sudden announcement from Alexa in the middle of our favorite song. What kind of challenges do you foresee there?

A: If instead of a smart device in your pocket, you have a watch on your person — or even an implant in your retina — as you go more and more invasive with the technology, the decision point for whether we want to keep interacting with the things around us or be tied to a feed coming in electronically is going to become much more important. Each of us will have to decide if we want to be tethered to people or to Google news alerts. And we’ll need to make those decisions intentionally, because if you just leave all your notifications on, your consciousness just gets flooded with all sorts of things you might not even value or prioritize.

A: I think the current situation has revealed an underlying preference for in-person interaction that maybe people didn’t consciously realize. When you take away the possibility of getting together with friends in person, you realize there’s something really valuable about that. And I don’t think that will ever go away no matter how advanced technology becomes. There’s just something fundamental about being in each others' physical presence. You can get a decent amount of that from the phone or other correspondence; people have had long-distance relationships from the beginning of recorded history. But almost always, those relationships intended to move toward a place where they could eventually get together in person. Fundamentally as humans, we are a very social species. We need social connections to feel normal. And I think right now, there is an opportunity for us to connect with the people who are closest to us in a deeper way.

A: The second season of my podcast Zombified is out now. In the final episode (which came out March 10), I talk with author and science communicator David Quammen about the origins of viral diseases and the stories behind how pandemics start and spread. He was so prescient about it, it was kind of creepy but also really cool. And then in between Season 2 and 3, we’re planning on doing a bunch of mini episodes about how life is changing with the pandemic.

Top photo: Screenshot of a video explaining the stag hunt game theory from the Cooperation and Conflict Lab. Video produced by Robert Ewing.

Oxygen first accumulated in the Earth’s atmosphere about 2.4 billion years ago, during the Great Oxidation Event. A long-standing puzzle has been that geologic clues suggest early bacteria were photosynthesizing and pumping out oxygen hundreds of millions of years before then.But something was holding back oxygen’s rise. Where was it all going?A new interpretation of rocks billions of years ol...

Oxygen first accumulated in the Earth’s atmosphere about 2.4 billion years ago, during the Great Oxidation Event. A long-standing puzzle has been that geologic clues suggest early bacteria were photosynthesizing and pumping out oxygen hundreds of millions of years before then.

But something was holding back oxygen’s rise. Where was it all going? 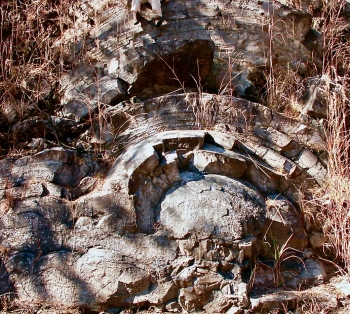 Giant mounds of fossil stromatolites from about 2.5 billion years ago are located in South Africa. For scale, notice a person’s dangling legs at the top center. These layered minerals were deposited on an ancient coastline by communities of microbes, including photosynthetic bacteria that generated oxygen. Credit: David Catling/University of Washington Download Full Image

A new interpretation of rocks billions of years old finds volcanic gases are the likely culprits. The study, co-authored by Arizona State University President’s Professor Ariel Anbar and led by researchers at the University of Washington (UW), was recently published in the journal Nature Communications.

Multicellular life needs a concentrated supply of oxygen, so the accumulation of oxygen is key to the evolution of oxygen-breathing life on Earth.

“If changes in the mantle controlled atmospheric oxygen, as this study suggests, the mantle might ultimately set a tempo of the evolution of life,” Kadoya said.

This new work is the culmination of a multi-institution, five-year, $5 million National Science Foundation project led by Anbar, who is an astrobiologist with ASU’s School of Earth and Space Exploration. Of particular importance to this most recent study is a previous study, also funded by this project and led by researchers at the University of Maryland. In that study, the research team studied ancient volcanic rocks, up to 3.55 billion years old, collected from sites that included South Africa and Canada and found that the early Earth’s mantle was far less oxidized, or contained more substances that can react with oxygen, than the modern mantle.

The Archean Eon, when only microbial life was widespread on Earth, was more volcanically active than today. Volcanic eruptions are fed by magma — a mixture of molten and semi-molten rock — as well as gases that escape even when the volcano is not erupting.

Some of those gases react with oxygen, or oxidize, to form other compounds. This happens because oxygen tends to be hungry for electrons, so any atom with one or two loosely held electrons reacts with it. For instance, hydrogen released by a volcano combines with any free oxygen, removing that oxygen from the atmosphere.

The chemical makeup of Earth’s mantle, or softer layer of rock below the Earth’s crust, ultimately controls the types of molten rock and gases coming from volcanoes. A less-oxidized early mantle would produce more of the gases like hydrogen that combine with free oxygen. The 2019 paper shows that the mantle became gradually more oxidized from 3.5 billion years ago to today.

The new study combines that data with evidence from ancient sedimentary rocks to show a tipping point sometime after 2.5 billion years ago, when oxygen produced by microbes overcame its loss to volcanic gases and began to accumulate in the atmosphere.

This has implications for understanding the emergence of complex life on Earth and the possibility of life on other planets.

“The fact that the solid planet plays a role in the rise of oxygen is really important for the search for life on other worlds,” Anbar said. “One of the main search strategies is to look for evidence of oxygen in the atmospheres of other planets. That strategy presumes that if you have life that produces oxygen, it will eventually build up in the atmosphere.”

Anbar points out, however, that the lag between the evolution of oxygen-producing metabolism and the buildup of oxygen on Earth suggests that this is not inevitable. This new paper indicates that the chemical composition of the planet’s interior matters.

“There could be worlds out there on which life exists and produces oxygen, but where oxygen never builds up because it is all consumed by volcanic gases,” Anbar said. “And maybe the chemistry of the interior of these worlds never evolves like Earth’s did to change that equation.”

With the results of this latest study, astrobiologists now have another set of conditions to help them look for life on other planets. Beyond oxygen in the atmosphere, the composition of a planet may also have to be strongly considered.

This story was written by Hannah Hickey of the University of Washington with contributions from Karin Valentine, media relations and marketing manager, School of Earth and Space Exploration.