For ASU grad, speech and debate helped light a fire for politics

Spring 2020 ASU graduate Alexander Sojourney discovered his passion for politics at ASU, and he hopes to continue that passion in the nation’s capital. 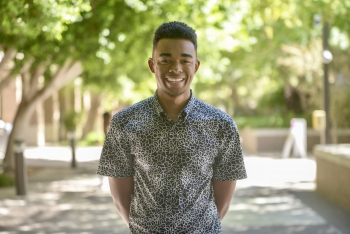 Sojourney, who is completing his degree in political science this month, was involved with many student organizations throughout his time at ASU. He participated in Undergraduate Student Government, the Speech and Debate club, Devils on the Run and the Black Student Union at the West campus.

As a junior, Sojourney was the student body president at the West campus, and as a senior he was the president of the Black African Coalition. Sojourney, who is from Glendale, Arizona, was also the recipient of the Presidential and New American University scholarships.

As a first-year student, Sojourney joined ASU’s Speech and Debate club, where he discovered his passion for politics.

“It occured to me midway through the semester that I think where my passion lies is being involved with politics at the local level, at the national level and specifically for me at the campus level,” Sojourney said.

As Sojourney prepared to graduate, he reflected on his time at ASU and some of the lessons he learned along the way.

A: Originally I had a major in the Thunderbird School of Global Management, but I met a friend my freshman year who wanted to make a debate club. I was in high school speech and debate. …  I think that's what made me change my major, and that was the “aha” moment for me to join student government, for me to be a campus liaison and actually make sure that if there are any changes students want, I would be able to institute those changes so students have a better time being a Sun Devil.

A: For me, something that surprised me about ASU was giving me the opportunity of traveling out of the country. For USG we were able to go to Hong Kong for an international trip for the PLuS Alliance, and it really solidified the fact to me personally that ASU is a global-reaching university.

We have so many locations and campuses that are out of the United States, and we have collaborations with other universities. When ASU talks about how it's a global university you really don’t have a perspective of it until you actually speak with students from Kings College, London, or from the University of New South Wales in Australia, and you actually talk about the history and the backstory and the context behind how ASU has all these massive partnerships. It really makes me happy to be a Sun Devil.

A: The selling point for me was Barrett, The Honors College. It was rated the No. 1 honors college by the New York Times, and I think that was a main selling point.

Out of high school I really wanted to continue being academically challenged, and for me looking at the competition ASU was the best value. It was the best education and job-prospect-wise after graduation; it just seemed like it was the better choice.

A: As of right now I am working for the Arizona Supreme Court. I am going to finish up my internship with them in late May, and then I am going to be applying to some fellowships for grad school. I’m looking at the Rangel Fellowship and Pickering Foreign Affairs Program. My plan, if I hopefully get accepted, is to attend Georgetown's democracy and governance master’s program.

A: I had the opportunity to meet internship coordinator Gisela Grant during my junior year at ASU while being selected to be an ASU Capital Scholar. My first interaction with Professor Grant, I was struck by her level of professionalism, her commitment to excellence and her no-nonsense personality. I admired the amount of self-sacrifice she would put in helping every student succeed. Professor Grant has helped me during my time at ASU by expecting more of me, which made me expect more of me.

Editor's note: This story is part of a series of profiles of notable spring 2020 graduates.Fernando Guillen, a first-generation law student from Las Cruces, New Mexico, graduated this week with a Juris Doctorate and a certificate in trial advocacy from the Sandra Day O’Connor College of Law. He recently was recognized with a Dean’s Award for academic performance and outstanding character and...

Fernando Guillen, a first-generation law student from Las Cruces, New Mexico, graduated this week with a Juris Doctorate and a certificate in trial advocacy from the Sandra Day O’Connor College of Law. He recently was recognized with a Dean’s Award for academic performance and outstanding character and was also given the Paul Holloway Trial Advocacy Award, which recognizes an outstanding ASU Law student who completed an Advocacy Fellow Program. 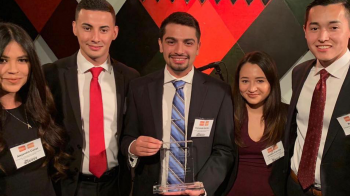 Fernando Guillen (center) with fellow members of the Chicano/Latino Law Students’ Association at ASU as they accept the award for 2019 Law Student Organization of the Year from the Hispanic National Bar Association in New York. Download Full Image

This past year, he also served as president of the Chicano/Latino Law Students’ Association at ASU, an organization that was also recognized by the Hispanic National Bar Association as Law Student Organization of the Year. Guillen was also selected as the 2020 Justice Michael D. Ryan Scholar by the Maricopa County Bar Foundation in recognition of his dream to serve the community through law.

Question: What was your “aha” moment, when you realized you wanted to study law?

Answer: I realized I wanted to study law when I was a child. When I was around 8 years old, my parents adopted two of my cousins from Mexico. Unfortunately, they were not able to become citizens in the process because of their age. As a result, they were not able to become citizens until they married. I wondered why the laws were written in that way and became really interested in policy and the legislative process. During undergrad I majored in philosophy and focused on the philosophy of law and ethics. I quickly learned that what is just is not always lawful, and what is lawful is not always just. This reinforced my desire to study law.

A: I chose ASU Law because of what it means to be an ASU alumnus in the Southwest. I moved here from New Mexico, and ASU Law is the best school closest to home. It was easy to adapt to the weather here, and I have enjoyed everything that Phoenix has to offer.

Q: What has your experience at ASU Law been like? 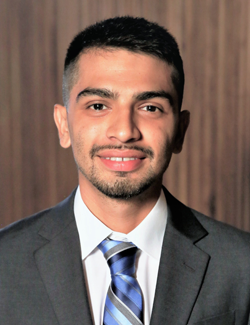 A: My experience at ASU Law has been great. All of my classes were great, and the staff and faculty were amazing. I especially enjoyed being a part of the Chicano/Latino Law Students' Association all three years and participating in student events like Barristers Ball and the Fajita Cook-Off. The highlight of my time was probably flying to New York as president of CLLSA to receive the award for 2019 Law Student Organization of the Year from the Hispanic National Bar Association.

Q: What’s the best piece of advice you’d give to those still in law school?

A: Remember to dedicate yourself and persevere. There is nothing you cannot accomplish with rational planning, willpower and motivation.

Q: What motivates or inspires you?

A: I try to be the best version of myself not only for me, but also my family. My two sons inspire and motivate me every day.

A: I am especially grateful for my family. My parents and sisters always support me. My girlfriend is also a key part of my support system. I am very grateful for them and for all the friends I made at ASU Law along the way. I moved here from out of state and did not have any family or friends in Arizona. The ASU Law community made me feel right at home.