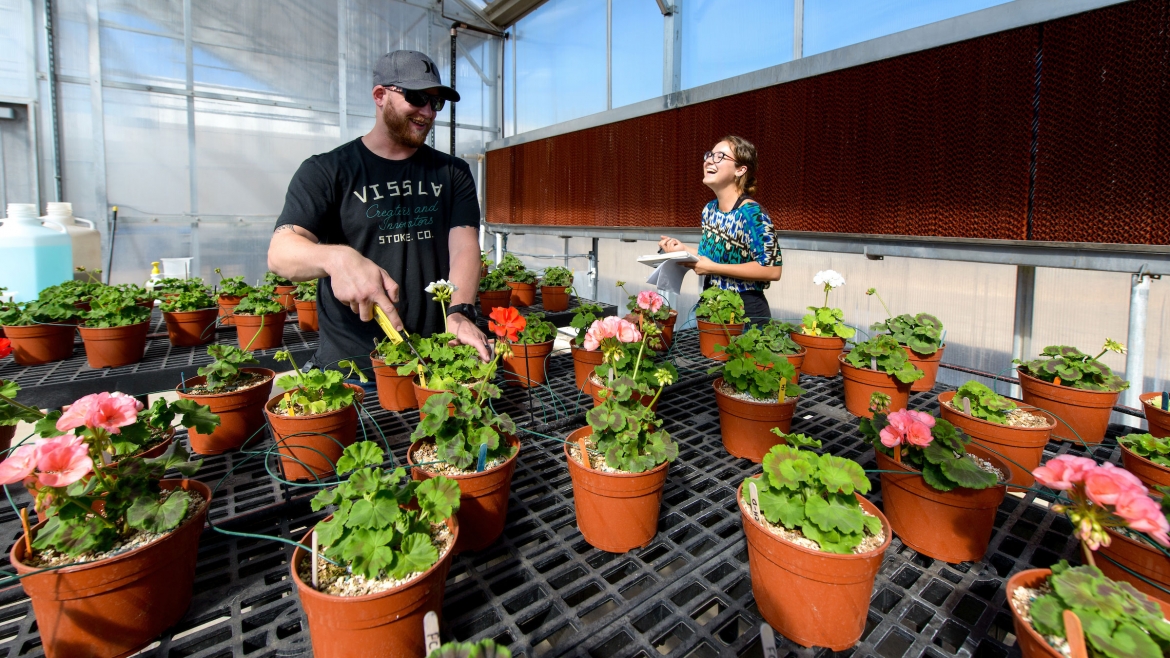 Carbon dioxide emissions likely will decrease in 2020 in the wake of COVID-19 and shelter-in-place orders. However, those emissions surely will rise again once the pandemic passes unless significant steps are taken to tackle human-caused climate change.

Increased energy efficiency in both new buildings and campus retrofits; on-site solar generation; renewable energy purchases from large-scale, off-site generation facilities; and purchase of carbon offsets and renewable energy were all deployed while growing the student population and undertaking a physical expansion of all ASU’s campuses.

This action is one key element of many initiatives that have helped ASU also earn the STARS (Sustainability Tracking, Assessment and Rating System) Platinum sustainability rating from the Association for the Advancement of Sustainability in Higher Education. STARS is a framework for colleges and universities to measure their comprehensive sustainability performance.

Platinum is the highest certification awarded in the STARS program and ASU is one of only six universities in the world to achieve the STARS Platinum rating.

“Our goal is to make sustainability innovation and leadership a hallmark of Arizona State University,” ASU President Michael Crow said. “ASU’s ambitious choice to pursue climate neutrality and our early realization of that aspiration, as well as our success in earning a STARS platinum rating, demonstrate the comprehensive commitment of our university community to lead in sustainability education, operation and practice.”

“The commitment to reducing ASU’s carbon footprint is an important first step that already has significant impacts,” noted Peter Schlosser, ASU vice president and vice provost of the Global Futures Laboratory. “We are working to ensure that the combination of concrete action and increased awareness of our planet’s boundaries will rapidly translate into more meaningful action on a national and global scale.”

ASU has reduced total net emissions by 80% per 1,000 gross-square-foot of building space and 65% per student compared with 2007. Of note, the university has reduced carbon emissions while increasing building space on campuses by 39.5% and the number of on-campus students by 24.3%.

“ASU has a distinguished track record of climate action along with a vibrant culture of sustainability, from serving as an original signatory of the Presidents’ Climate Commitment, to establishing the first and largest School of Sustainability in the country, to playing a key leadership role in launching the commercial solar power purchase agreement marketplace in Arizona,” said Morgan Olsen, ASU executive vice president, treasurer and chief financial officer. “The elite STARS Platinum rating and climate neutrality are major milestones in ASU’s leadership in helping society move toward sustainability and thoughtful stewardship of our planet.”

With many other ongoing initiatives, ASU will also continue to work on improving its overall sustainability as measured by STARS and ASU’s eight sustainability goals.

“We seek to serve as both a ‘living laboratory’ and a living example of sustainability to demonstrate to our communities and the world what is possible with dedication and innovation,” Dalrymple said.

J.T. Roane, assistant professor of African and African American studies in Arizona State University's School of Social Transformation, has been awarded a 2020-21 Schomburg Fellowship from the New York Public Library.The Scholars-in-Residence Program offers fellowships designed to support and encourage top-quality research and writing on the history, politics, literature and culture of the people...

J.T. Roane, assistant professor of African and African American studies in Arizona State University's School of Social Transformation, has been awarded a 2020-21 Schomburg Fellowship from the New York Public Library.

The Scholars-in-Residence Program offers fellowships designed to support and encourage top-quality research and writing on the history, politics, literature and culture of the peoples of Africa and the African diaspora, as well as to promote and facilitate interdisciplinary exchange among scholars and writers in residence at the Schomburg Center. 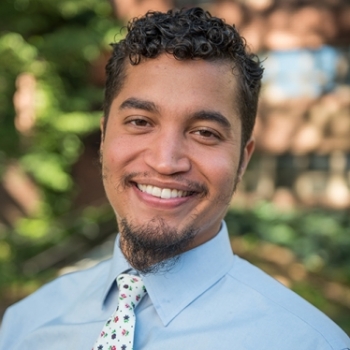 Roane talked to ASU Now about the program fellowship, the importance of the Schomburg Center and what motivated him to apply.

Question: Could you tell the ASU community a little bit more about the Schomburg Center?

Answer: The Schomburg Center for Research in Black Culture is a special branch of the New York City Public Library based in Central Harlem. It is one of the largest holders of archival materials on black life in the world and its collections cover Africa, the Caribbean, Brazil and of course the U.S. The original collection was begun by Afro-Puerto Rican archivist and bibliophile Arturo Schomburg — a central figure in the Harlem Renaissance — in the 1920s. The center remains a vibrant site of cultural exchange, for example hosting the monthly Conversations in Black Freedom Studies series organized by leading historians of civil rights and Black Power, Jeanne Theoharis and Komozi Woodard.

Q: What was your primary motivation to apply for the Schomburg Fellowship?

A: The archival collections served as my primary motivation. The Schomburg has 11 million items including documents and material culture sources to which I will have access! This is a once-in-a-lifetime chance to engage these renowned collections. While I have a set schedule of research to complete my book, I’m also very excited about the archival rabbit holes that are possible in that space. For example, in the last few years the center made public profound black essayist and writer James Baldwin’s collection, as well as renowned actor, singer and activist Harry Belafonte’s collection. I cannot wait to discover new materials for future writing projects and also for the classroom!

Q: What was the first thought that came to your mind when you realized you were one of the awardees?

A: If I’m being honest, a wave of shock and disbelief went over me. First of all, we are generally living in a surreal time, disoriented in every aspect of our lives by the COVID-19 pandemic, and reminded about the fragility of life itself in our globalized and unequal world. However, the shock for me went deeper than simply receiving unexpected good news in the midst of calamity. Although I am trained as a historian, my embrace of the radical interdisciplinarity of black studies has often run me into trouble with more traditional historians. I was shocked if also deeply appreciative of “being seen” for such an illustrious award by an interdisciplinary panel that likely included senior historians.

Q: Tell us a little bit more about your research and how this program will help you with it.

A: I am engaged in a broad program of interdisciplinary research whereby I take black communities — including those embracing heterodox epistemologies, dissident gender identities and non-normative sexualities — as the progenitors of meaningful insights about the social-ecological arrangement of U.S. society and the wider African diaspora. My current book manuscript, “Dark Agoras: Insurgent Black Social Life and the Politics of Place in Philadelphia,” which is the project I proposed for the research fellowship, investigates multiple modes of insurgent spatial assemblage and queer social formation — or dark agoras — from within which Philadelphia’s black communities articulated disparaged forms of knowledge about the city.

Taken together, the heterodox epistemologies, alternative cartographies and distinctive spatial practices of black working-class communities constituted what I describe as black queer urbanism. Rather than simply attending to black or queer experiences of the city, black queer urbanism refers to a critical approach that views non-normative forms of black social-geographic life and the distinctive and often discredited knowledge produced in dark agoras as the conceptual resources and bases for an alternate vision for the future of urban life and ecologies outside the rubrics of gendered individualism, heteronormative familialism and reproductive futurity.

Within the derided spaces of “slums,” in areas marked by planners, researchers, and the police as (sexually) disreputable and obsolete and in social institutions considered strange and unproductive, black communities engaged in efforts ranging from mundane acts of refashioning urban spaces to expressly confrontational and liberatory efforts to transform the social and ecological arrangement of the city. Particularly “Dark Agoras” recovers counterintuitive historical connections between various progenitors of black queer urbanism including Father Divine’s esoteric spiritualist movement, the Peace Mission, the followers of John Africa’s radical environmentalist “law of life,” MOVE and Philadelphia’s unsanctioned frontline queer HIV-AIDS and harm reduction organization, Prevention Point.

To the historiography of 20th-century urban social movements, my book contributes the account of a six-decade tradition whereby ordinary black city dwellers traversed the spaces of the black underground and the set-apart spaces of esoteric black religious life, tracing a rogue urban phenomenology, and generating a challenge to key aspects of the pro-growth formula of social-spatial order prescribed by dominant urbanists. The project queers the notion of the Long Movement for Black Freedom by analyzing actors relegated, even within this temporally and spatially capacious paradigm, to the edge of the historiography because of their embrace of heterodoxy as well as identities and modalities of community and futurity viewed as incommensurate with integration, leftist radical transformation, cultural nationalism and other vindicated paradigms within the Long Movement historiography.

While at the Schomburg I want to examine a number of collections related to this work including the Carnegie-Myrdal Study of the Negro in America Research Memoranda, black Philadelphia-based sociologist Ira de A. Reid’s papers, the papers of additional esoteric black religious communities including their Ahmed A. Bey/Moorish Temple and the Moorish Science Temple Collections, their collections of black queer writers, Joseph Beam and Essex Hemphill, as well as collections that will help elucidate the phenomena of the black underground such as their collections on the Harlem riots.

Q: How did the School of Social Transformation and The College of Liberal Arts and Sciences help prepare you for success?

A: I am currently teaching a course on black cultural production and the Harlem Renaissance. A significant portion of what we know about and what is preserved from that period is housed in the collections at the Schomburg. For example, they house Langston Hughes’s materials. My students have helped to prepare me to jump into these materials and histories with new appreciation and respect.

Q: When you are in New York, what are you going to miss most about the School of Social Transformation?

A: I’m going to miss my students and colleagues! I genuinely enjoy the unique camaraderie of our community in (the school). We work hard to expose histories and enduring legacies of colonialism, slavery, genocide and gendered violence. We also draw to light histories of resilience and revolutionary action in these same contexts. I hope to bring some of that energy with me to the Schomburg and also to bring back some of what I learn to share with my community here.