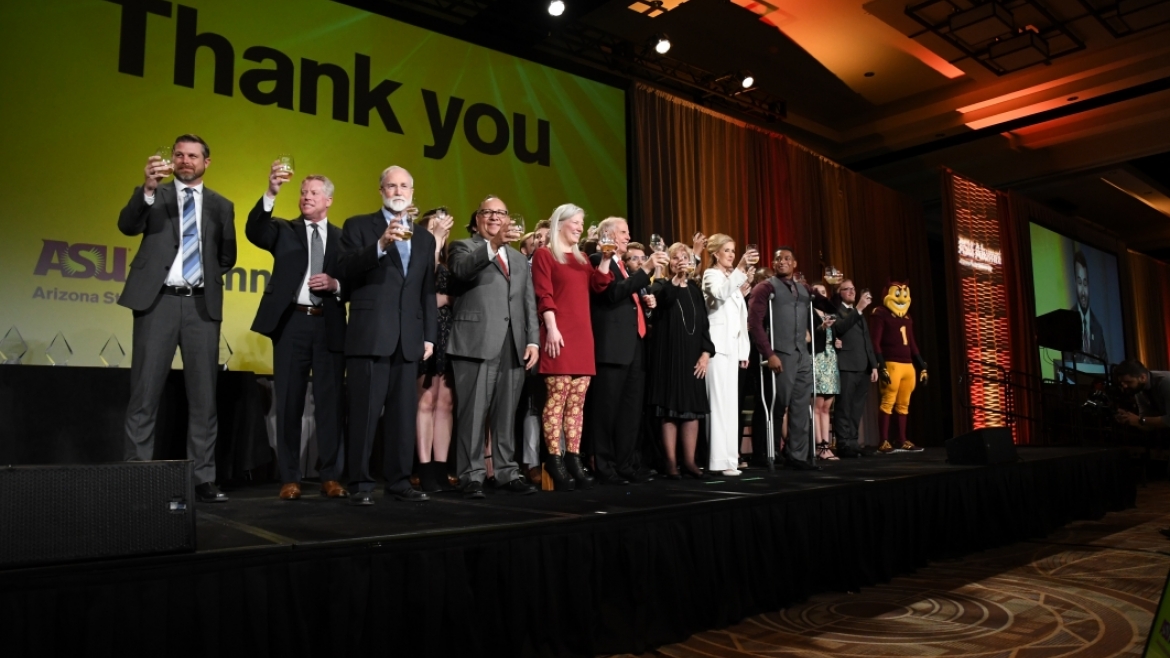 In front of a record-breaking crowd of more than 950 community leaders, business executives and Arizona State University alumni on Feb. 25, the 2020 Founders’ Day Awards program honored ASU alumni, faculty members and benefactors for their distinguished achievements.

The awards ceremony, hosted by the ASU Alumni Association, has been a signature event for the university for decades, and honors individuals who exemplify the spirit of the founders of the Territorial Normal School of Arizona, ASU’s predecessor institution. It also celebrates the innovations of alumni, faculty members and supporters of one of the nation’s fastest-growing knowledge enterprises.

The 2020 awards program honored an alum who has achieved athletic feats at the championship level; an alum who has made significant contributions to the state of Arizona; three faculty members who prepare and inspire the next generation of leaders; and a power couple who have invested in improving life in Arizona. 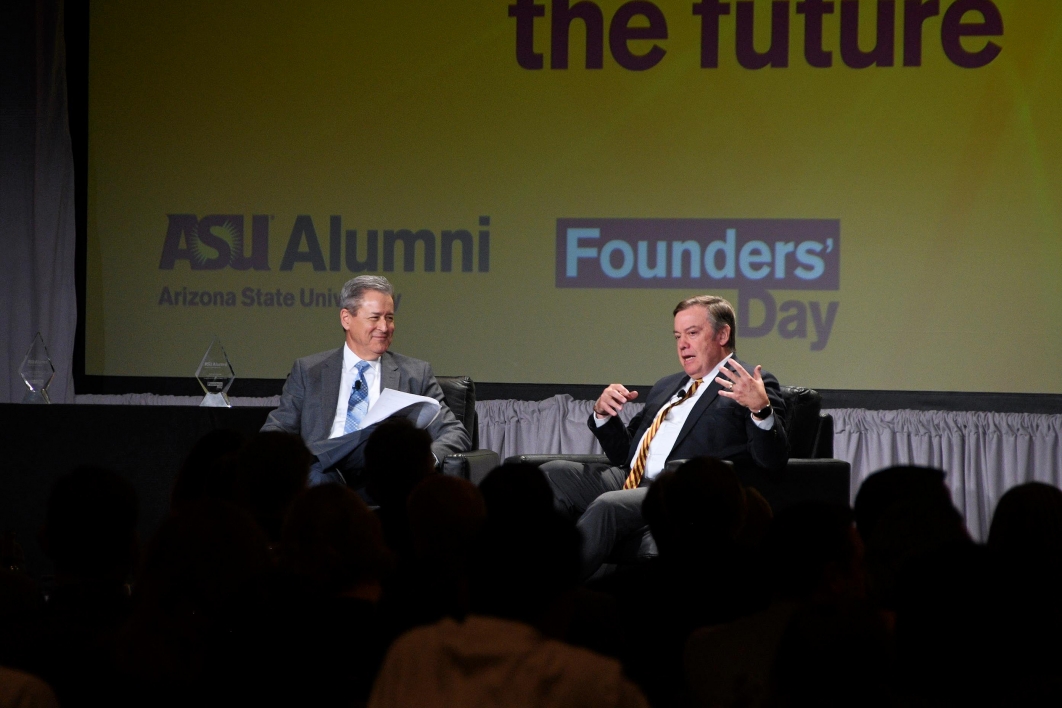 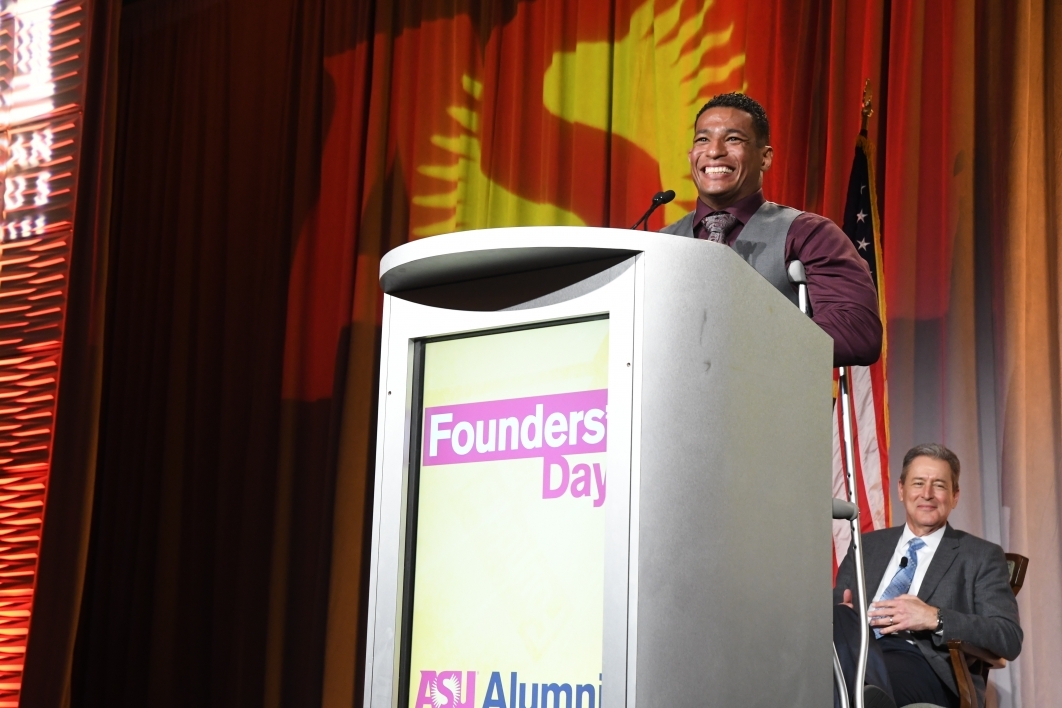 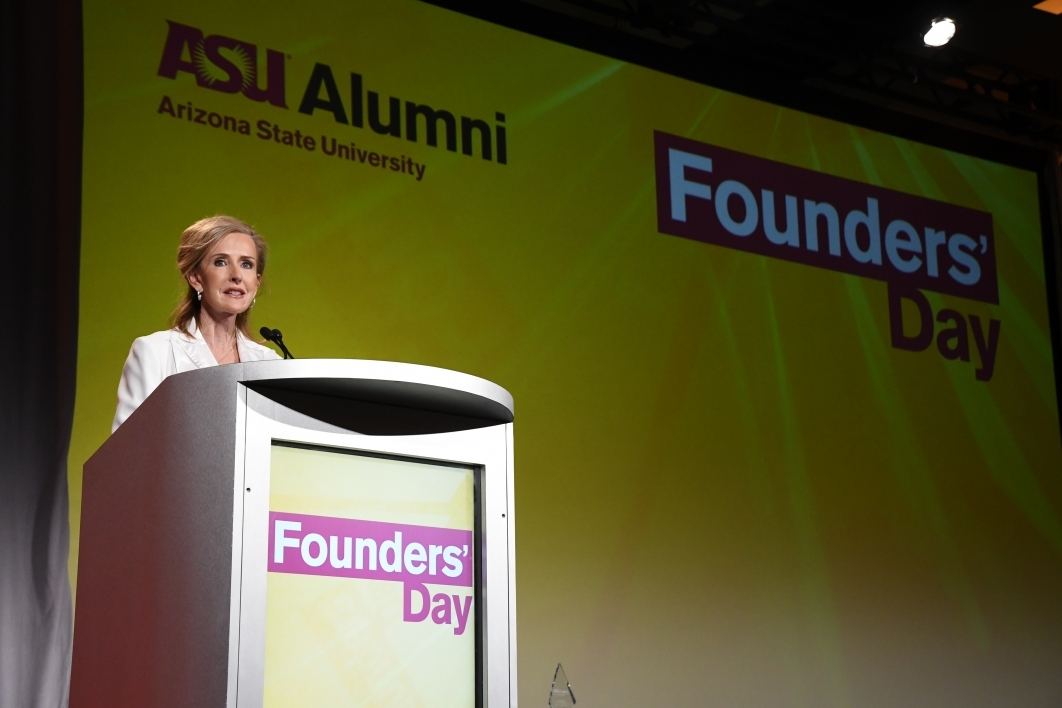 Karrin Taylor Robson, ’88 BA, ’88 BA, ’94 JD, accepts the Alumni Achievement Award and thanks those who had an impact on her life including family, ASU faculty and staff members, and friends she made during her collegiate experience. 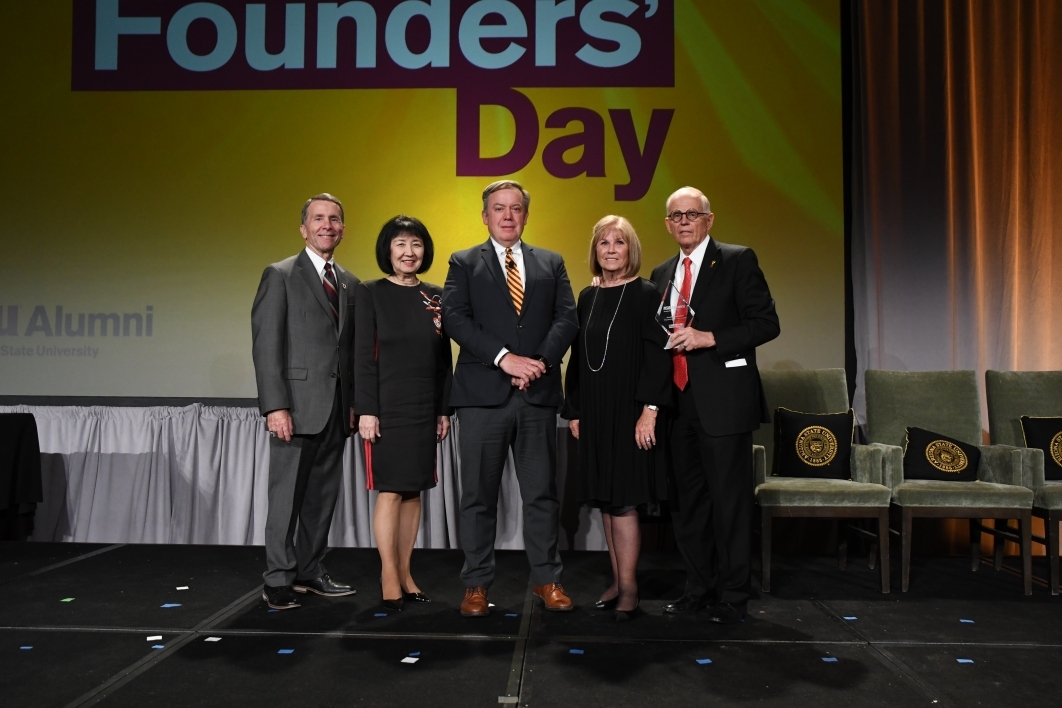 Annette and Leo Beus (far right) accept the Philanthropist of the Year Award at Founders’ Day 2020.

The following individuals were be honored at the event, which took place at the Arizona Biltmore in Phoenix. 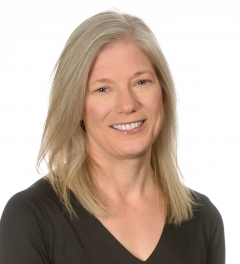 ASU faculty researcher Devoney Looser, an internationally recognized scholar and critic, specializes in British women’s literary history. She has been a professor of English at ASU since 2013 and a Foundation Professor since 2018. Looser teaches undergraduate and graduate courses in 18th- and 19th-century British literature, women’s writings and Jane Austen.

She has authored and edited nine books, including “The Daily Jane Austen: A Year of Quotes” and “The Making of Jane Austen,” a Publishers Weekly Best Summer Book for nonfiction. She was named a Guggenheim Fellow and a National Endowment for the Humanities Public Scholar in 2018, in support of her forthcoming biography, “Sister Novelists: Jane and Anna Maria Porter,” to be published by Bloomsbury in 2021. As a widely published essayist, her writings have appeared in the Atlantic, the New York Times, the Times Literary Supplement, the Chronicle of Higher Education, Entertainment Weekly, Slate and Salon. 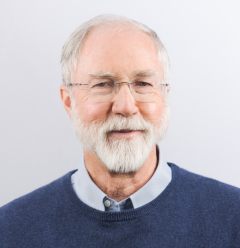 Nationally heralded for his contributions to the ASU community and for the lasting impact of his service on science policy, Professor James Collins has made significant improvements to the field of science. Currently, he serves as chair of the board of life sciences at the National Academies of Sciences, Engineering, and Medicine, using his scientific expertise to call attention to critical issues in modern science.

As co-chair of the Academies’ committee on gene drive research in non-human organisms, he was instrumental in establishing important new precedents for the responsible use of gene editing technology, especially the scientific and ethical issues surrounding environmental release of genetically engineered organisms. From 2005 to 2009, Collins served as the head of biological sciences at the National Science Foundation and as a member of NSF’s senior management team. 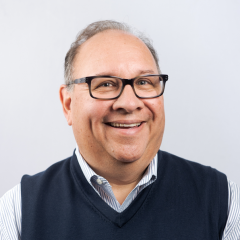 Nationally recognized as a pioneer in political science education, Associate Professor Richard Herrera embodies ASU’s teaching mission by creating innovative opportunities for students and by inaugurating programs that will continue to build ASU as a leader in education. He has been a valued member of ASU’s School of Politics and Global Studies for 30 years and played a leading role in developing the School of Politics and Global Studies Early Start program in 2014.

Herrera oversaw the Capital Scholars Washington, D.C., summer internship program from 2004 through 2019, and during that time, he enhanced students’ learning opportunities and was instrumental in obtaining scholarships to help undergraduate students fund their internship experience. In 2018, Herrera created a new study abroad program in Ireland called the Politics and Culture of Ireland. Robles is known nationally for his career as an NCAA wrestling champion, author and motivational speaker with an ability to conquer adversity. For nine years, Robles has been the leading wrestling analyst for ESPN, and since 2015 for the Pac-12 Network.

Robles knew he wanted to become a wrestler, but being born without his right leg, the odds were stacked against him. His mother told him he could do whatever he wanted to in life, or in his words, that he could be “unstoppable.” When he was 14, he tried out for his high school team. He went from being last in the city to finishing his junior and senior years at Mesa High School with a 96-0 record, a two-time Arizona State Champion and a high school national champion.

At ASU, Robles was a three-time All-American, the 2011 NCAA national champion and a Nike-sponsored athlete. He served four years on the President’s Council on Fitness, Sports and Nutrition, was a two-time ESPY Award recipient — including the prestigious Jimmy V Award for Perseverance — and was a 2012 inductee into the National Wrestling Hall of Fame, as well as a 2017 inductee into the Arizona Sports Hall of Fame. 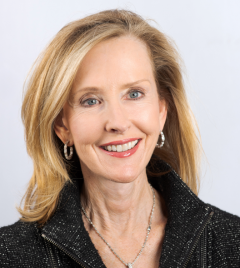 Taylor Robson is the founder and president of Arizona Strategies, as well as a member of the Arizona Board of Regents, serving as secretary of the board; chair of the finance, capital and resources committee; a member of the audit committee; and a member of the academic affairs and educational attainment committee. The Arizona businesswoman, philanthropist and community leader works to promote and sustain economic growth, enhance property values, develop an inclusive higher education system, cultivate civic engagement and support those who serve in our military.

Taylor Robson has led national efforts representing property owners and stakeholders across the country to achieve responsible land use and property regulations. In addition, she has worked with private sector interests for the advancement of public infrastructure and other development-related community benefits.

Prior to forming Arizona Strategies, Taylor Robson served as executive vice president of DMB Associates, Inc., a master-planned community developer, and was a principal with the law firm of Biskin, Hunt and Taylor. She also serves on the boards of numerous government, community and economic development organizations, including the Joe Foss Institute, the Greater Phoenix Economic Council, the Arizona Chamber of Commerce and invisionAZ. For nearly 15 years, she has served as a member of the U.S. Air Force Chief of Staff’s Civic Leader Group in Washington, D.C.

Philanthropists of the Year Award 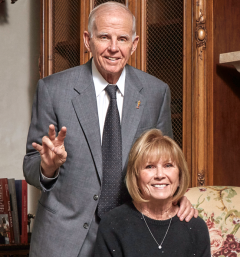 Annette and Leo Beus are longtime supporters of ASU, generating a lasting impact through a series of philanthropic investments. They have enriched a range of units and programs through their generosity, including research, student scholarships, service groups, a teaching award, an endowed chair and Sun Devil Athletics.

Most recently, they gifted $10 million to enable the completion of the Beus Compact X-ray Electron Laser Lab in ASU’s Biodesign Institute, and also gave $10 million for the Beus Center for Law and Society, which now houses the Sandra Day O’Connor College of Law on ASU’s Downtown Phoenix campus. Leo Beus has practiced law in the Valley for more than 48 years and is the co-founder of Beus Gilbert McGroder PLLC.

Top photo: The Founders’ Day 2020 honorees and more than 25 student scholars helped celebrate the 60th anniversary of the annual event and awards program. Photo courtesy of the ASU Alumni Association

Nanotechnology is a hot topic in the engineering world. Discoveries at this tiny scale — meaning billionths of a meter, or the distance that fingernails grow each second — are inspiring optical and electronic innovations in fields ranging from medicine to construction.But creating the substances required to advance such work is a heated issue. Fabricating nanomaterials is difficult. Results ca...

Nanotechnology is a hot topic in the engineering world. Discoveries at this tiny scale — meaning billionths of a meter, or the distance that fingernails grow each second — are inspiring optical and electronic innovations in fields ranging from medicine to construction.

But creating the substances required to advance such work is a heated issue. Fabricating nanomaterials is difficult. Results can be inconsistent, and the process requires toxic solvents and high temperatures. Consequently, the environmental costs could be significant. 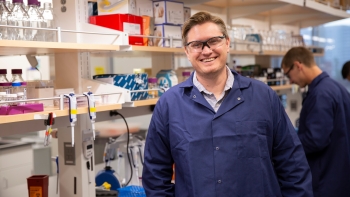 Brent Nannenga, an assistant professor of chemical engineering in the Ira A. Fulton Schools of Engineering at Arizona State University, is exploring a biological route to more precise, less abrasive means of nanoparticle synthesis.

“Biology is very good at controlling the fine details of structures,” Nannenga said. “And there is a direct relationship between structure and function. If you really want to know how a biomolecule works, you need to understand its structure.”

Nannenga and his team at ASU’s Biodesign Center for Applied Structural Discovery are seeking to unlock some of these structures because understanding them, and their interaction with inorganic materials, could yield the ability to design biomolecules that create nanoparticles.

“Consider a materials scientist who wants a nanoparticle of a particular size and composition. Researchers could create proteins to synthesize that material in a very controllable, very reproducible manner,” he said. “Also, proteins work in regular aqueous solutions at room temperature. This is far more environmentally friendly than traditional processes.”

Nannenga’s vision has captured the attention of the National Science Foundation, which has selected him for a 2020 Faculty Early Career Development Program (CAREER) Award. Such recognition is reserved for researchers who show the potential to be academic role models and to advance the missions of their organizations. CAREER awards provide approximately half a million dollars over five years to further each recipient’s research.

For Nannenga and his team, the pathway to that ultimate goal of building biomolecules to fabricate specific nanomaterials begins with trying to understand the structure of one common protein that already synthesizes inorganic material.

“We are looking at ferritin and iron oxide,” he said. “Ferritin exists in all kingdoms of life from bacteria up to human beings. It takes iron and oxidizes it. We have computer modeling about how that interface may work, but nobody has ever really visualized it. So, I thought we could apply some of the cryo-electron microscopy or ‘cryo-EM’ methods that I learned during my postdoctoral work to do exactly that.”

Work of this kind involves very rare equipment: electron microscopes, which use electrons instead of light to visualize molecules and even individual atoms. It was access to such a device that attracted Nannenga to ASU from his work in structural biology at the Janelia Research Campus in northern Virginia, part of the Howard Hughes Medical Institute.

“Cryo-EM is a popular field right now. The Nobel Prize for chemistry in 2017 was awarded for developing this kind of microscopy for high-resolution determination of biomolecule structures,” he said. “So when I learned that ASU was getting this kind of machine, I was ready to move back home.”

Nannenga is an Arizona native, and conducted both his undergraduate and master’s degree work in chemical engineering at the Fulton Schools.

The challenge of answering questions about the structure of ferritin using electron microscopy relates to image resolution. When materials scientists look at silicon, for example, the dose of electrons applied by the microscope can be very high. It’s hundreds or thousands of electrons per square Angstrom, a unit of measure for interatomic distances. Such a powerful beam produces a clear image of molecular structure.

“But using that dose of electrons with biological material would just obliterate your sample,” Nannenga said. “So what cryo-EM does is dial back that dose to get an image that doesn’t ‘cook’ a given protein, for example. We are talking only five to 10 electrons per square Angstrom. Unfortunately, that lower dose means a poor signal-to-noise ratio. The image lacks the clarity we need.”

The solution to this problem is to gather a lot of images. “We take thousands of these pictures,” Nannenga said. “And we pick out tens of thousands, or hundreds of thousands, of different image sections. We can then combine them computationally to clearly visualize the structures we are trying to solve.”

Nannenga is hopeful that this novel work will expand the scientific community’s understanding of the frontier between biology and materials science. As a result of this new knowledge, the creation of new “bio-inorganic” compounds with unique properties and functions may offer answers to some of engineering’s most significant challenges.