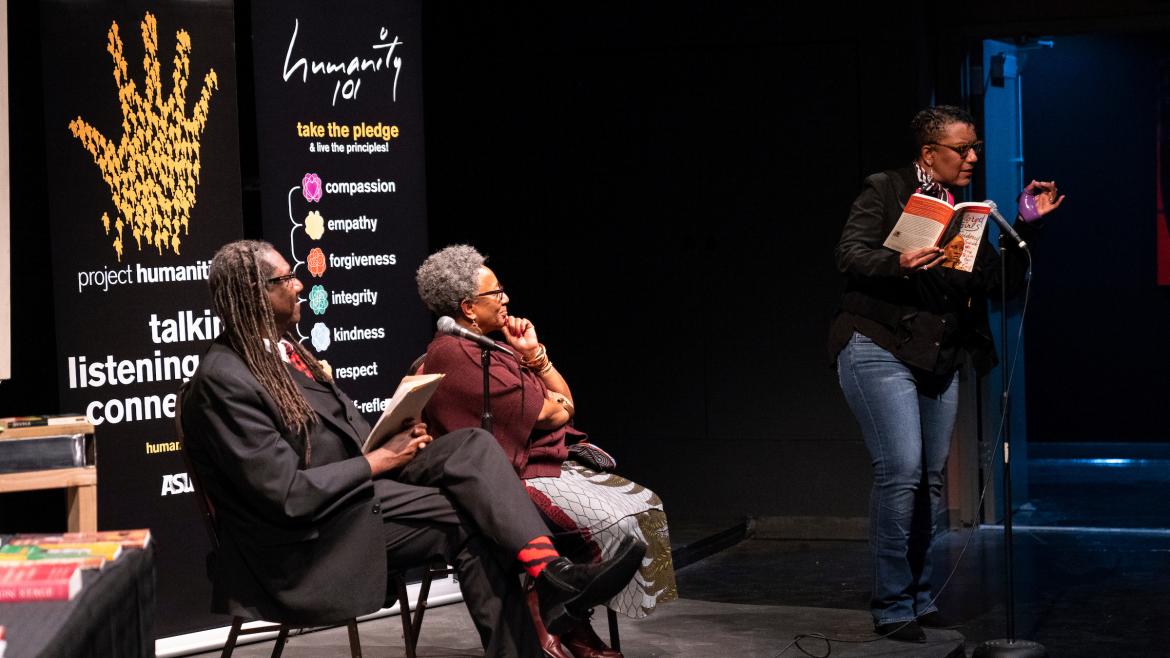 Remembering the poetry of Ntozake Shange

Talking, listening and connecting: They’re the three pillars of Arizona State University’s Project Humanities, and there were plenty of each to be found Monday night at the Helen K. Mason Performing Arts Center in downtown Phoenix, where roughly 100 community members gathered to celebrate the life of the late black feminist poet, novelist and playwright Ntozake Shange, who passed away in October 2018.

The event, which notably took place on Martin Luther King Jr. Day, encouraged attendees to bring along their favorite passage, song, photograph, personal story, performance, poem or artifact related to Shange and share it with the crowd.

Grace Wilson-Woods of Sun Lakes brought along the Playbill she kept from a 1978 Chicago production of what would become Shange’s signature work, “For Colored Girls Who Have Considered Suicide / When the Rainbow Is Enuf.”

“At that time, a lot of people of color didn’t go to plays,” Wilson-Woods said. “It was a pleasure to go see people who looked like me and talked about things I understand.”

Though Shange is perhaps less well-known than such contemporaries as Toni Morrison and Maya Angelou, she was no stranger to Project Humanities founding director Neal Lester — literally. He first reached out to Shange as a grad student in the early 1980s after reading her work “changed his entire worldview.” She responded by inviting him to her house to talk.

Later, as an assistant professor, Lester wrote the first critical book on her work, “Ntozake Shange: A Critical Study of the Plays.” Over the years, they kept in touch, even as illness compelled her to enter an assisted living facility in Maryland.

“When she passed, it reminded me how all the work I have done can on some level be traced back to her inspiring me,” Lester said. “And within the larger community, there was such an outpouring of gratitude and love and loss that it just felt like we needed to do something.”

Fatimah Halim, president and CEO of Life Paradigms Inc., which runs programs for underserved communities in the Phoenix area, served as co-facilitator of Monday’s event along with Lester. Halim read a piece from Shange’s 1982 novel “Sassafrass, Cypress & Indigo.”

“I would be transported through her writing,” Halim told the crowd. “Her pain felt like stuff I went through, felt like my pain. Her love felt like my love.” In light of the fact that Shange’s work is predominantly concerned with what it means to be a black woman, Lester thought it important to have Halim co-facilitate with him.

When he first started studying black feminist literature, Lester said, “People would say to me, ‘Well, you’re not a black woman.’ And I would say, ‘You’re right, I’m not. But I have black women in my life … and I want to be an ally.”

Several of the attendees shared how “For Colored Girls” was their first introduction to Shange. The writer’s first work and most acclaimed theater piece, it premiered on Broadway in 1976 when she was only 28. It consists of a series of poetic monologues — performed by seven nameless black women referred to only by colors they have been assigned — accompanied by music and dance, a form of expression Shange coined the “choreopoem.”

On Monday night, Hugh Downs School of Human Communication Professor Olga Davis would have made Shange proud with her impassioned performance of an excerpt from the lady in yellow’s monologue. Davis was a student at The Juilliard School in New York City in the late 1970s when “For Colored Girls” was showing on Broadway, and she kept a poster for the play above her bed in her tiny studio apartment.

“You could count (the number of black students at Julliard then) on one hand,” Davis said. When she heard of Shange’s passing, she wanted to make sure students knew about her, so she built a communications course being offered this semester around literature by black women and included Shange’s work.

Born Paulette Williams, Shange changed her name in 1971. In Xhosa, a language native to South Africa, ntozake means “she who comes with her own things” and “shange” means “she who walks with lions.”

Known for her unorthodox use of punctuation, capitalization and phonetic spelling, Shange’s work is sometimes misunderstood as unsophisticated.

What she believed, Lester explained, is that “if we elevate the mundane to the eloquent, then you can understand the colloquial universal.”

Throughout the evening, short audio clips of Shange reciting her poetry were played. In one, “Abt Atlanta,” she laments the unacknowledged deaths of several poor black children in Atlanta between 1979 and 1981.

“That feels too relevant to what’s happening now with unarmed black and brown boys being shot,” Lester said after the clip finished. “That’s why, when we start talking about Black Lives Matter and get the response that all lives matter, we need to remind people about Emmett Till, about the Atlanta child murders.”

ASU theater alumna Alexis Green discovered Shange the summer before her last year of college and credits the poet with inspiring her to see the strength in herself and do things she wouldn’t otherwise have thought possible.

During her senior year, Green organized a black theater festival, which included a production of “For Colored Girls.” Today, she lives in Chicago but is currently visiting Phoenix to direct a play at ASU’s Lyceum Theatre called “Good Friday,” opening Friday, Feb. 8, which addresses the intersection of gun violence and sexual violence.

Green recalled the first time she read Shange as “the most revolutionary, eye-opening moment” in her life. When she said as much to the crowd gathered Monday night, a chorus of affirmations resounded.