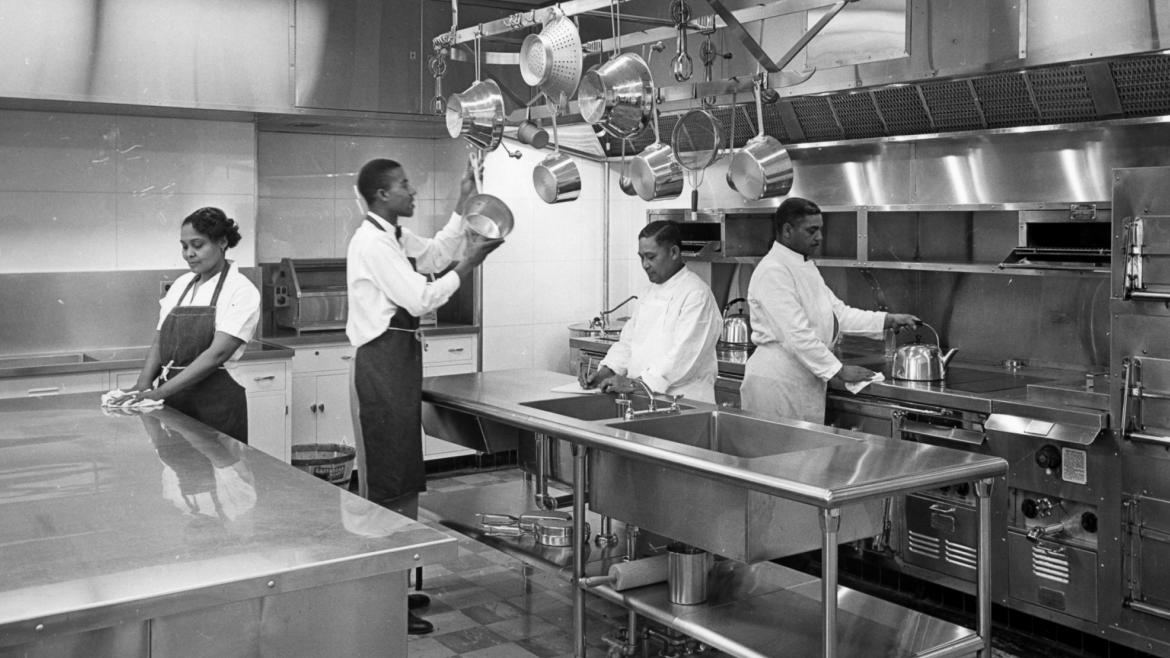 History of the White House kitchen as satisfying as the food

Leading the free world would leave anyone hungry, but luckily for American presidents, the executive branch has a storied history of culinary excellence, thanks especially to its predominantly black staff.

James Beard Award-winning author Adrian Miller, who spoke at a Food and Thought event at Arizona State University on Friday, has a new book that highlights the importance of African-Americans to the White House kitchen.

Miller’s book, "The President’s Kitchen Cabinet: The Story of African-Americans Who Have Fed Our First Families, from the Washingtons to the Obamas," takes a look at some of the most pivotal characters in the White House’s kitchen history, some of which he spoke about at the event hosted by the ASU College of Health Solutions.

The reception also featured some of the recipes included in the book that were prepared for presidents and their families throughout history, including first lady Caroline Harrison’s deviled almonds and a baked macaroni and cheese that was served to Thomas Jefferson.

Miller, a former lawyer and White House politico, said that the inspiration for the book came from a quote he read in another book about Southern food, which said that “the tribute to African-American cooks had yet to be written.”

“So with no qualifications at all except for eating a lot of soul food, and cooking some, I embarked on a journey to write this book on soul food,” Miller said.

The makeup of the White House kitchen staff, while being predominantly African-American, has also featured a diverse cast of cooks and chefs.

“You had free whites, free blacks, enslaved African-Americans and indentured whites all working side by side” in the White House kitchen, he said.

Other ethnicities have also made prevalent marks on the White House throughout history, often with little recognition, according to Miller.

His book looks into the personalities and quirks of the rotating cast of executive kitchen crews throughout history. One of the most elusive characters in his book is Eserlene Dewberry, who was a head chef in the White House and was known for singing during her shifts.

“Eserlene Dewberry starts to work in the White House in the Truman administration, and she is there all the way to Reagan,” Miller said. “Mrs. Dewberry was a trained opera singer, so she would sing opera while they were making meals in the White House, so much so that he started calling her Madame Dewberry." Members of the White House kitchen staff, circa 1952. Photo courtesy of the Library of Congress

Other presidents would also occasionally cook for themselves, like Dwight Eisenhower, who went to extra lengths to enjoy his own cooked meals.

One of the most revered and consequential chefs, according to Miller, was Zephyr Wright.

“If there was one person in my books I would want to meet it would be Zephyr Wright … the long-time personal cook for Lyndon and Lady Bird Johnson,” he said.

Wright’s cooking was a hit among Johnson’s colleagues in Congress, but she was also an important character in more serious policy initatives during the administration.

“She was also very instrumental in the 1964 Civil Rights act,” Miller said. “The (Johnson) family would drive from the ranch in central Texas to Washington, D.C., and they would drive through the South … and Zephyr Wright suffered so many indignities that ultimately she refused to take the trip. So Lyndon Johnson would actually use these stories to members of Congress to say, ‘Look, the president’s cook can’t even be afforded decent rights; what does this mean for our country?’”

“When he signed the bill using 70-plus pens, he actually used one of them and gave it to Zephyr Wright and said, 'You deserve this as much as anyone,'" Miller said.

Wright was also at the center of what Miller called the “great chili controversy of 1964,” where a recipe of Wright’s for Texas chili, which has no beans, caused a national uproar over whether the president enjoyed beans or not.

Miller played a tape of Wright's strategizing with the White House social secretary over how to reassure the nation that the president did in fact enjoy beans, talking at length about the various types of beans and bean dishes that the president regularly enjoyed.

Wright is one of many chefs and characters discussed in the book who not only changed the way the White House kitchen worked, but also how the culinary profession evolved.