Nominate a co-worker for ASU's 'Writer of the Year' award

For the seventh year, the ASU English Department is recognizing a hard-working staff writer at Arizona State University who deserves public recognition with its 2018 ASU "Behind-the-Scenes Writer of the Year” Award. Nominations are being accepted until Wednesday, Oct. 17.

Criteria for the award include: 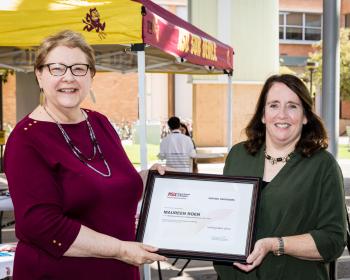 Maureen Roen (right), editorial and communications coordinator for ASU’s College of Integrative Sciences and Arts, was the winner of the 2017 "Behind-the-Scenes Writer of the Year” Award. Here she is presented with the honor by the director of ASU writing programs, Professor Shirley Rose. Photo by Bruce Matsunaga Download Full Image

• An ASU staff writer who usually remains "behind-the-scenes." These are staff writers who rarely receive bylines or much public recognition for their work.

• A staff writer whose writing makes significant contributions to ASU's mission of serving students and the community.

• Someone who shows commitment and dedication to the craft of writing.

• A writer whose work most often shows sensitivity to audience and to changing rhetorical situations as needed for effective communication.

In addition, the candidate must be able to appear at noon Oct. 22, on ASU's Tempe campus to receive the award from the Writing Programs director and/or English department chair.

The winner's co-workers and nominating supervisor are encouraged to attend the event and cheer on the winner. This award is one of the major highlights of the "National Day on Writing," a day on which universities across the nation celebrate the central importance of writing in our lives.

To nominate a candidate, email a short paragraph or two, along with links to two or three typical examples of the candidate’s work to bruce.glenn@asu.edu. Please explain how your candidate fits most or all of the above criteria and would be worthy of this public recognition and state the approximate number of years the candidate has served ASU as a staff writer.

As parks fund is set to expire, ASU professor describes a legacy of benefits

The patio of the clubhouse at Encanto Park in Phoenix was an oasis of shade on a hot, sunny day earlier this week. There, Arizona State University Professor Dale Larsen described how a federal funding program has given millions of dollars to the city to create hiking trails, playgrounds, picnic areas — and shady spots.That 54-year-old program, the Land and Water Conservation Fund, is set to expi...

No. 23 Sun Devils Cruise Past SMU For Third Straight Win As parks fund is set to expire, ASU professor describes a legacy of benefits

As parks fund is set to expire, ASU professor describes its legacy of benefits.
September 27, 2018

The patio of the clubhouse at Encanto Park in Phoenix was an oasis of shade on a hot, sunny day earlier this week. There, Arizona State University Professor Dale Larsen described how a federal funding program has given millions of dollars to the city to create hiking trails, playgrounds, picnic areas — and shady spots.

That 54-year-old program, the Land and Water Conservation Fund, is set to expire Sept. 30. Over five decades, Arizona has received more than $230 million from the fund, which it has passed on to municipalities for projects including South Mountain Park and Goodyear Community Park, to state parks including Lost Dutchman and Slide Rock, and even to the Arizona Board of Regents for a park at the ASU West Campus.

The fund gave a total of $100 million to all 50 states this year, including $2.1 million to Arizona.

The money does not come from taxpayers, but from fees paid by energy companies that extract oil and natural gas along the Gulf Coast, according to Larsen, a professor of practice in the School of Community and Development. He was assistant director and then director of Phoenix's Parks and Recreation Department for 27 years, retiring in 2010.

“That bipartisan legislation was an innovative way to share those funds all over the country in parks, conservation areas and wildlife areas as sort of an environment tradeoff,” he said.

The fund divides the revenue into federal and state portions according to a formula that changes frequently, but for many years it was 60 percent federal and 40 percent state. The city of Phoenix has received more than $10 million in Land and Water Conservation Fund money since the program began in the 1960s. Nearly $250,000 was designated for work at Encanto Park, which was built in the 1930s. 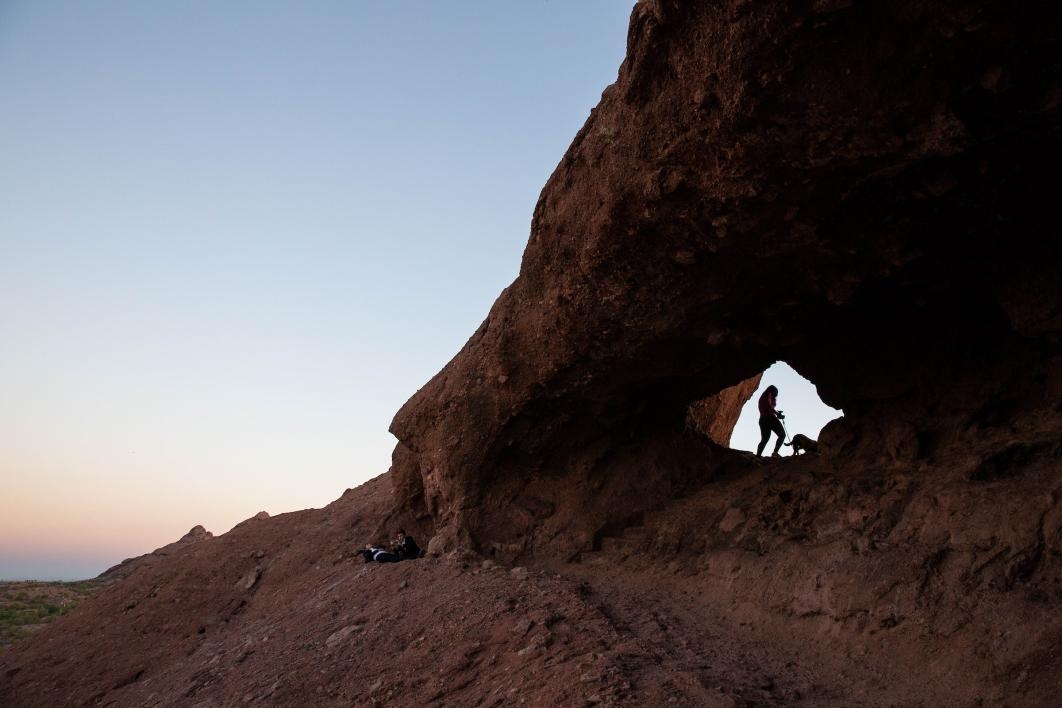 Papago Park in Phoenix has received more than $65,000 in Land and Water Conservation Funds for development, primarily in the late 1960s and '70s. 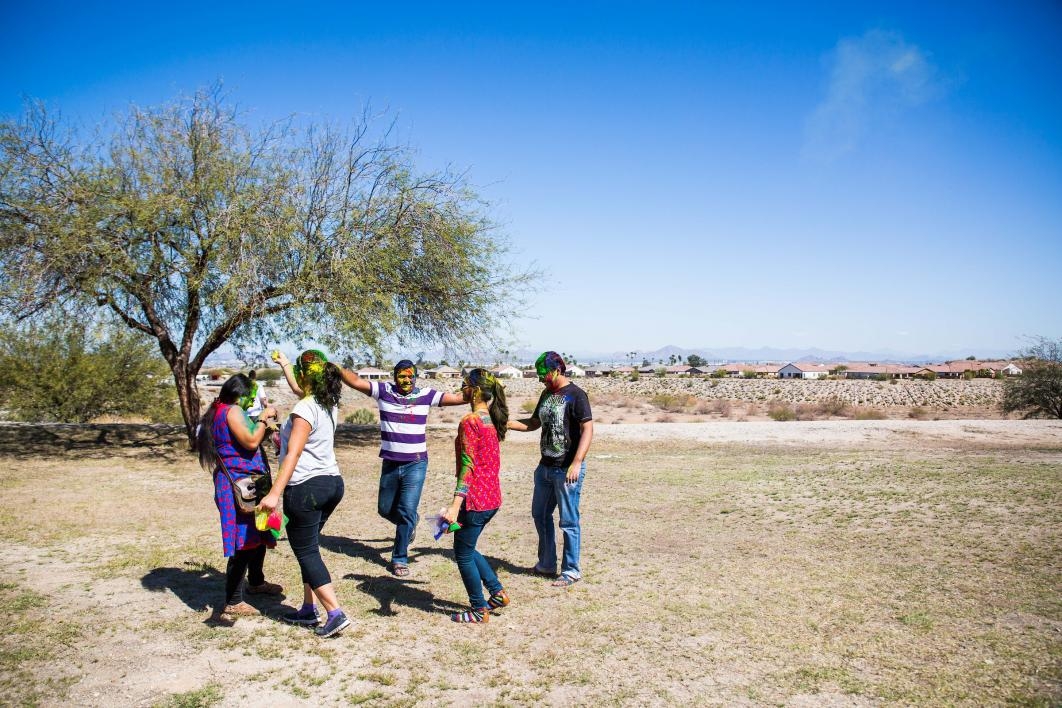 The city of Phoenix received $28,000 from the Land and Water Conservation Fund in 1966 to develop South Mountain Park, one of the largest urban parks in the world.

“Phoenix and other municipalities benefit from the state side,” he said.

“The rest would go to federal agencies for purposes primarily of acquiring and expanding their federal property footprint, primarily in Western states. So the rub, over the years, has been from Western state legislators who think the LWCFLand and Water Conservation Fund has been used as a land grab for federal properties to be expanded, which would then preclude the opportunity for mining, for grazing or for hunting and fishing.”

The National Park Service, Forest Service, Fish and Wildlife Service, and Bureau of Land Management use the fund to acquire more land.

The conservative Heritage Foundation supports allowing the fund to expire, not only because the organization opposes expansion of federal lands but also because federal money is going to support local projects that should be funded in other ways.

U.S. Rep. Rob Bishop, R-Utah, chairman of the House Natural Resources Committee, blocked reauthorization of the LWCF in 2015 because he believed too much of the money went to buy land in the West. However, this year, Bishop co-sponsored the Restore Our Parks and Public Lands Act, with Raúl Grijalva, D-Ariz., to permanently restore the fund and also allocate money toward the $12 billion maintenance backlog at the National Parks Service.

Larsen said that the program has been frozen and temporarily extended a few times, but never been allowed to expire.

The city of Phoenix has received more than $10 million from the Land and Water Conservation Fund since it began.

Larsen teaches a class at ASU called “creating community,” and he tells his students that parks not only provide recreational and environmental benefits but they also have an economic impact.

“Parks, if they’re managed properly, tend to increase the property values of the neighborhood they’re located in,” he said.

But a poorly maintained park, with trash and graffiti, can lower property values.

“In Phoenix, what is the most treasured commodity? Shade,” he said.

“The LWCF provides shade development opportunities so people can enjoy those parks.”